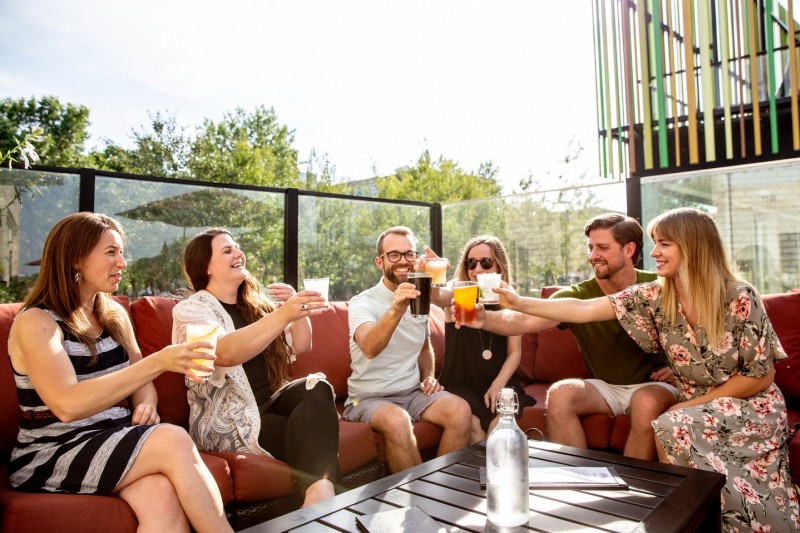 This summer we’re all about alliterations, namely sipping in the sunshine (or shade), seeing new spots and celebrating our stars.   Plus, there’s always room for ice cream.

After a pandemic-induced stall, the city’s culinary scene is welcoming new rooms from the city’s celebrated chefs.

The latest is the Two Hands dining room in one sixteen, Sherbrook Street’s newest hip joint, which is a joint venture between Good Neighbour Brewing (it’s now their tap room) and The Beer Can. Having first started with bar snacks, chefs Michael Robbins (whose last post was as executive chef of Pidgin, in London, England) and Keegan Misanchuk (who also recently returned from London, having cooked at BRAT, the world’s 78th best restaurant) are now serving a full menu in the dining room side of the operation, with many of the refined dishes coming from or being touched by the open flame of a wood grill.

Adding to the city’s excellent pizza options (see: Pizzeria Gusto, Vera, Santa Ana, Wall Street Slice, Shorty’s) is Parcel Pizza. It’s by the crew that brought us The Roost—easily one of Winnipeg’s most charming establishments and Oxbow Natural Wine Bar—another gem on Osborne (where other highly rated rooms include Tabula Rasa, BMC Market and Sous Sol). The room is by Fireside Design, whose other creations include Harth Mozza and Wine Bar, Nonsuch Brewery and Juneberry (all fabulous choices). The dishes, like their other rooms, emphasize fresh ingredients, with plenty of vegan options too.

Winnipeg’s most recent culinary star, chef Emily Butcher of Top Chef Canada and the Canadian Culinary Championships fame (where she finished sixth and with a bronze respectively) has teamed up with Mike Del Buono of Burnley Hospitality (which started with King + Bannatyne) to create Nola. Located in downtown Saint-Boniface, this place has been getting rave-reviews for dishes like Butcher’s signature seared scallops with fermented radish buerre blanc. At lunch, don’t miss the super saucy burger, nor the crispy woodear mushroom po boy.

As well, a new taproom location has opened. Low Life Barrel House, which previously was brewing within Barn Hammer, now has its own location at 398 Daly St N where you can sip from its unique selection of barrel-aged Bretts and sour craft beers, with wines and piquettes on the horizon too.

For more new restaurants, check out our summer new and notable guide where you’ll find brunch in Osborne Village, pizza in River Heights and some sensational crepes on Sherboork.

Before Nola, Butcher had been the long-time sous chef of deer + almond, whose chef/owner Mandel Hitzer can be found on Food Networks Wall of Chefs alongside Feast Café Bistro’s Christa Bruneau-Guenther. On top of small plates and set menus at the nationally acclaimed deer + almond, Hitzer now also has the chic d+a café at EQ3, where seemingly casual lunch dishes become an art form. Bruneau-Guenther’s Feast is both a West End hub and a celebrated spot for Indigenous cooking, with the self-professed home cook taking recipes from her Peguis First Nation roots and adapting them to a café-style format.

The city’s latest Food Network notable is Jenna Rae Hutchenson, of Jenna Rae Cakes, who can be seen on Wall of Bakers. On top of being on this television judging panel, Hutchinson has co-authored a best-selling baking book with her twin sister and business partner Nicole Kosowan.

Everywhere you go in Winnipeg you’re likely to find a prime-time patio, be it in a public square, hidden from the street or in a public park under an oasis of trees.   Here’s some of the city’s best.

Looking for a posh patio? 529 Wellington steakhouse has one of the best hidden gems in the city, with a backyard garden patio right off the Assiniboine River. Downtown, The Fort Garry hotel’s Oval Room Brasserie has a west-facing patio straddling Winnipeg’s castle offering white umbrellas, lush greenery and elegant cuisine. At True North Square, Gusto North’s second floor patio is one of the finest in the city, with plush furniture and attentive service to match the fine Italian menu.

If people-watching is a must for your patio experience, Old Market Square in the Exchange offers The Cordova Tapas and Wine, Chosabi, King + Bannatyne, Peasant Cookery, The King’s Head and Amsterdam Tea Room—all within a stone's throw, while on the other side of Main there’s Corrientes, Cibo, James Avenue Pumphouse, Kevin’s Bistro, Saddlery on Market and Bijou Patio pop-up, where you can order takeout from a number of local spots using a QR code.  For more seasonal pop-ups, downtown has The Blue Note—a collaboration from Modern Electric Lunch, one of our favourite new cafes and the legendary Times Change(d) honkey-tonk bar—featuring live music and local drinks. Cargo Bar in Assiniboine Park pairs craft cocktails with the Riley Family Duck Pond under a canopy of trees; The Beer Can is a huge outdoor patio featuring a Mexican cantina alongside The Granite Curling Club on the Assiniboine River and Patio 340 at CCFM in Saint-Boniface is always popping with live music and francophone flair.

There’s also The Forks, where you’ll find the city’s—and perhaps Western Canada’s—largest outdoor patio. This patio wraps around the harbour-side of the building, providing views of the rivers and boat traffic, with plenty of trees for shade and furniture that’s sure to impress. It is serviced by all the fantastic food kiosks inside, along with The Common bars—one of them located outside with 20 wines and beers on tap that are anything but common.

In any given summer you can expect a fleet of 50 food trucks operating within Winnipeg. While most are weekend-only operators on the festival and special events circuit, there’s always a regular lineup from Monday to Friday along Broadway, with options that will run you from fancy tater tots to wood-fired pizzas to authentic Korean. Food trucks aren’t your thing? Pull up a seat on the Capital Grill Broadway patio. It’s always on point.

For ice cream, much like our Fat Boy burger scene, this one’s territorial, with each hood duking it out with their respective dairy. In sunny St. James, just across the bridge from Assiniboine Park, Sargent Sundae holds it down with seasonal flavours. On Jubilee alongside the Assiniboine River there’s the Bridge Drive-Inn (BDI), a legend that has been going strong since 1957. Newer to the scene is Chaeban, a multiple award-winning dairy company whose owners come from Lebanon and Syria. They now produce cheese along with the creamiest ice cream you’ve tried. In Saint-Boniface, we’re all for Dug & Betty’s, while at The Forks Neon Cone has you covered.