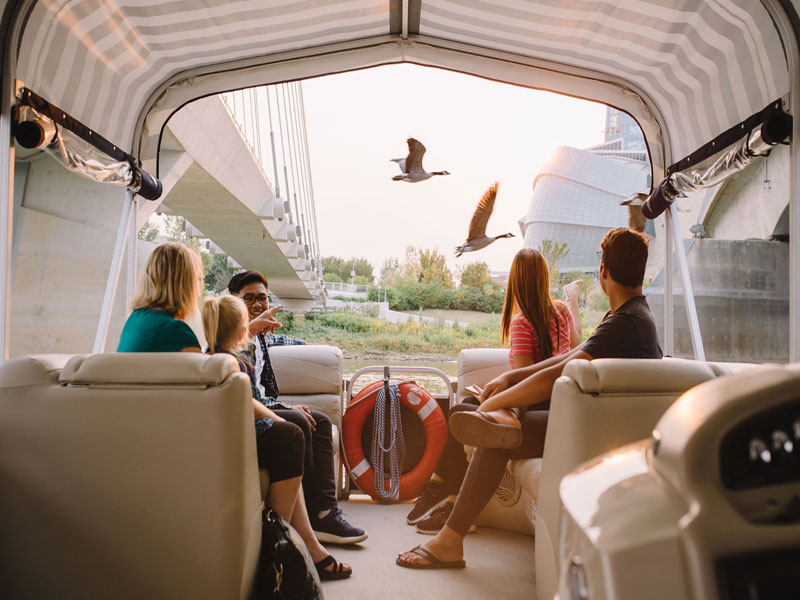 A Weekend in Winnipeg - Summer

There’s no shortage of things to do and see when the weather is warm and the city is in bloom. Here are our top picks for what to do when you are in Winnipeg for the weekend in summer.

It’s important to start such a jam-packed day on the right foot, and there are few places better to do so than Clementine, which was named one of Canada’s best new restaurants by enRoute magazine in 2017 and received a 4 star review in the Globe and Mail. The hardest part of this meal will be choosing between all the mouth-watering options. We recommend ordering a few and sharing with a friend.

After that, fuel up at one of the city’s trendy coffee shops. Take a coffee to go at Parlour Coffee, or Forth, and wander through the historic streets of the Exchange District, where you can find examples of turn-of-the-20th-century architecture filled with quirky shops and artistic creations. Take in some window shopping at the city’s best art galleries and maker spaces, speckled throughout the Design Quarter.

Take a stroll down the river walk from the Exchange District, and find yourself at The Forks — Winnipeg’s largest tourist attraction, where there’s always something going on. Spend some time watching the boarders at the skate park, wander through the market, or head down to the harbour and book a scenic view with Splash Dash Tours, where you’ll learn the history of the Assiniboine and Red Rivers and how they helped shape the city. If you’d rather stay on land, rent a bike at Bee-2-Gether (tandem bikes also available) and roll down the many scenic trails.

When you get hungry, head to The Forks Market, where a stunning variety of food options await you — from Argentinian to Ukrainian, to gourmet bites and traditional classics. If you’re thirsty, wash everything down with a wine or beer flight from The Common.

If you want to spend some time indoors, head to the Manitoba Legislative building and be amazed by the architectural mysteries hidden there thanks to the Hermetic Code Tour (Wednesdays at 6 p.m.). If it’s game day in Winnipeg, you can also get off your feet at Shaw Park, cheering on the Winnipeg Goldeyes baseball team while sampling through the ballpark’s selection of local beers.

As the sun goes down, the vibe in Winnipeg seems to heat up. Head back to the Exchange District where live music and festivals are happening most weekends at The Cube stage. A great selection of local restaurants nearby means you’ll find something delicious, from sushi burritos to shawarma, and a fine selection of patios in between. If you’re with a group, book a table at Across The Board Game Café and play through hundreds of different board games late into the night.

A jaunt through St. Boniface, Winnipeg’s francophone district, will put a spring in your step for the day. Grab a flakey and oh-so-delicious pastry at La Belle Baguette, drop by for a pick-me-up at Café Postal, or enjoy a heartier breakfast at Chaise Café (weekends only — but always open for dinner). For dessert, make sure to stop by Chocolatier Constance Popp and be wowed by unparalleled confectionary creations.

A great way to see Winnipeg is by hopping on a tour. Winnipeg Trolley Tour and Wonderful Winnipeg City Tours all take you across the city, uncovering neighbourhoods and stories of Winnipeg you won’t want to miss. Although there are no stops during the tours, take notes on some destinations you should revisit later.

Nature’s beauty is never far away in Winnipeg, and you can get up close in your experience. Make a trip to Oak Hammock Marsh for an accessible and interactive look at a full wetland ecosystem, or head to FortWhyte Alive for some canoeing, hiking, and even getting to see a herd of bison up close.

Another can’t-miss landmark is Assiniboine Park, which is a photographer’s dream. Public gardens abound, including the colourful English Gardens and the gorgeous bronze artworks of the Leo Mol Sculpture Garden. A trip to the park isn’t complete without stopping by the zoo, especially the Journey to Churchill exhibit where you can watch polar bears swimming just over your head.

Touring through Winnipeg will have you near some of the city’s best restaurants. Don’t drive by — stop in and satisfy those cravings. Chaeban Ice Cream has made a name for itself with its frozen treats using Syrian recipes, while Feast Café Bistro offers a menu rooted in First Nations cuisine. If you need to carb-load, De Luca’s is open for a homemade pasta lunch six days a week, and gives you a good excuse to pick up some cheese and charcuterie from the Italian grocer to nibble on later.

Keep the energy going at Assiniboia Downs, where you can cheer on live horse racing. If you’re feeling artistic, Rainbow Stage is Canada’s longest-running outdoor theatre, while Shakespeare in the Ruins will put on one of the Bard’s plays in the Ruins of the Trappist Monastery Provincial Heritage Park.

Cap your night off at one of Winnipeg’s many patios, taking in Winnipeg’s lush tree canopy and warm nights. The Roost gives a bird’s-eye view of the picturesque Corydon neighbourhood, while Segovia’s patio serves up some of the city’s best small plates.