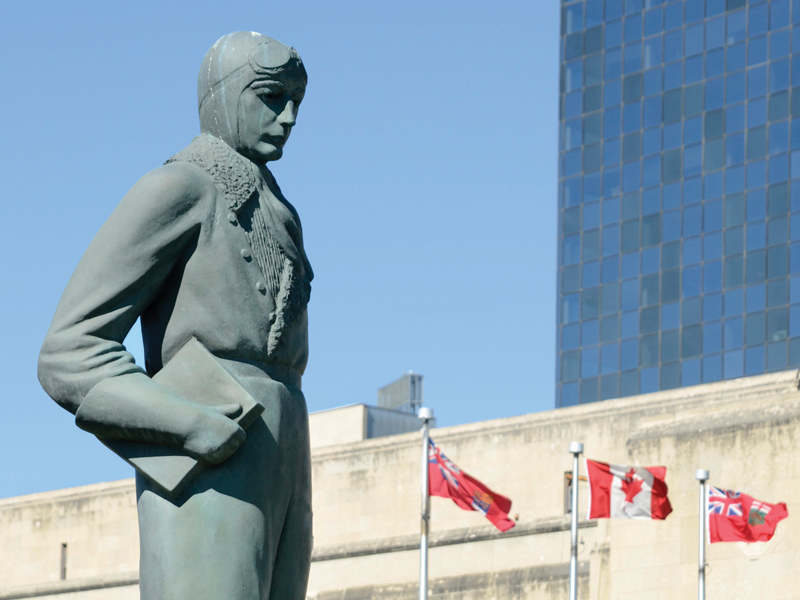 Without Winnipeg there would be no James Bond. I kid you not Miss Moneypenny.

It all began in a clapboard house in the inner-city neighbourhood of Point Douglas – Syndicate Street to be precise. Here, William Stephenson – the spy who provided Ian Fleming with the basis of Bond – began the journey that would take him from this working-class neighbourhood to the world of international intrigue.

About Stephenson, Fleming would write in The Sunday Times in 1962, that Bond was: "a highly romanticized version of a true spy. The real thing, the man who became one of the great agents of the [Second World War] is William Stephenson."

To live like a spy, you have to think like a spy, so mull over your plan of attack for the day starting at Miss Browns in the Exchange, a setting which provides a prime vantage point to investigate the area’s beautiful turn-of-the-20th century architecture. Miss Browns’ flat whites and tall blacks are just the kind of coffees that will keep your senses sharp, plus their window looks out over the downtown cop shop, so you can keep tabs on what the local 5-0 is up to (because spies do that, right?)

While sipping your coffee and snacking on a pastry take some time to ponder Stephenson’s departure from Winnipeg during the First World War, where our hero shot down 26 enemy planes (after just five hours of flying instructions) before being tossed into a German POW camp. He would go on to escape, returning to his squadron in 1918 where he was awarded the Military Cross, Distinguished Flying Cross, the Legion of Honour and the Croix de Guerre with Palms – all while still in his early 20s.

A man cannot become a spy without dressing the part, so make your way to Hanford Drewitt on Broadway (once dubbed “Millionaire’s Row”) for the finest in luxurious men’s clothing – after all, Stephenson made a fortune between world wars dabbling in radio and steel.

Don a debonair suit, drape yourself in tweed and don’t forget the perfect silk socks. To complete your transformation into the life of international mystery, make your way to Thomas Hinds Tobacconist and pick up a polished humidor of Cuban Cohiba Behikes.

Once appropriately suited up, make your way to the homes of the city’s most elite citizens. Stroll the sidewalks of Armstrong’s Point and Wellington Crescent to marvel at stunning mansions and do what Stephenson would do – search for evidence of an international security breach.

Spying was Stephenson’s greatest gift, and his clandestine ways landed him the position as Sir Winston Churchill’s most trusted confidant. This position saw him trek between London and Washington, attempting to convince President Roosevelt to join the Second World War.

Stephenson was a key player in the establishment of an American intelligence service during WWII, which would eventually become the CIA. Because of this (along with other feats) he has been memorialized with a bronze statuette at the CIA Headquarters in Washington, DC. The statue was made by famed Ukrainian-Canadian sculpture Leo Mol, a man who made Winnipeg his home. Mol’s works are prominently displayed in Assiniboine Parks’ Leo Mol Sculpture Garden – a serene part of the city where one can enjoy his wondrous bronze works that depict everything from local iconography to scenes from Greek mythology.

Of course, Winnipeg has its own statue of Stephenson, located on a small grassy strip surrounded by the bustle of the city on Memorial Boulevard. The statue describes how he became known as Intrepid, a name given to Stephenson by Churchill himself after he led the team that broke Enigma, the essential German coding machine.

If you look south from the vantage point of Winnipeg’s statue of Stephenson, you’ll cast your gaze on the Manitoba Legislature where the Golden Boy sits atop one of the city’s most intriguing mysteries. The building is a riot of perplexing symbology, Masonic secrets and temple treasures which can be deciphered on the intriguing Hermetic Code tour.

This whole area is also conveniently located across from the Winnipeg Art Gallery where you can indulge your cultural side amongst masterpieces from all over the Commonwealth.

Even spies need to recharge their minds and bodies, and we all know Bond would never take a casual supper, so head to one the city’s stately repurposed mansion, 529 Wellington. 529 combines impeccable black tie service (their pleasant sommelier Christopher expertly oversees a phonebook of vintages) with aged steaks and a la carte sides, like asparagus with hollandaise and sweet potato mash with maple pecan butter. They also have brilliant garden patio.

After dinner, if you’d like to try your hand with Lady Luck, then a visit to the blackjack table is the perfect spot for reconnaissance. At Club Regent Casino, you can hearken back to tropical beaches and glistening bodies as you roll the dice beneath thundering waterfalls and the chirps of colourful birds.

Or, wrap yourself in the opulence of 18th century splendour at McPhillips Station Casino, where plush velvet, crystal chandeliers and the spirit of decadence enhance games of chance.

A day as an international spy wouldn’t be complete without a dry martini – shaken, not stirred, and The Palm Lounge in The Fort Garry Hotel is the best spot to do some classy sipping. On most nights there will be someone tickling the ivories in this room that offers polished brass rails and ornate features everywhere you look.

And, if you’re anything like Stephenson, you won’t be drinking alone – for our hero’s other claim to fame is that he once cozied up to ingénue Greta Garbo, convincing her to spy for him. No wonder he referred to his activities as “The Ministry of Ungentlemanly Warfare.”

All that is left of the man they called Intrepid is a headstone in Bermuda, claiming he died in 1989 at the age of 93. Of course his legacy lives on today, thanks to the imagination of a young writer called Ian Fleming, who brought Stephenson back to life behind the suave silhouette of the world’s most beloved spy – James Bond. Whatever really happened to our hero remains a mystery, but perhaps that’s exactly how he wanted it.