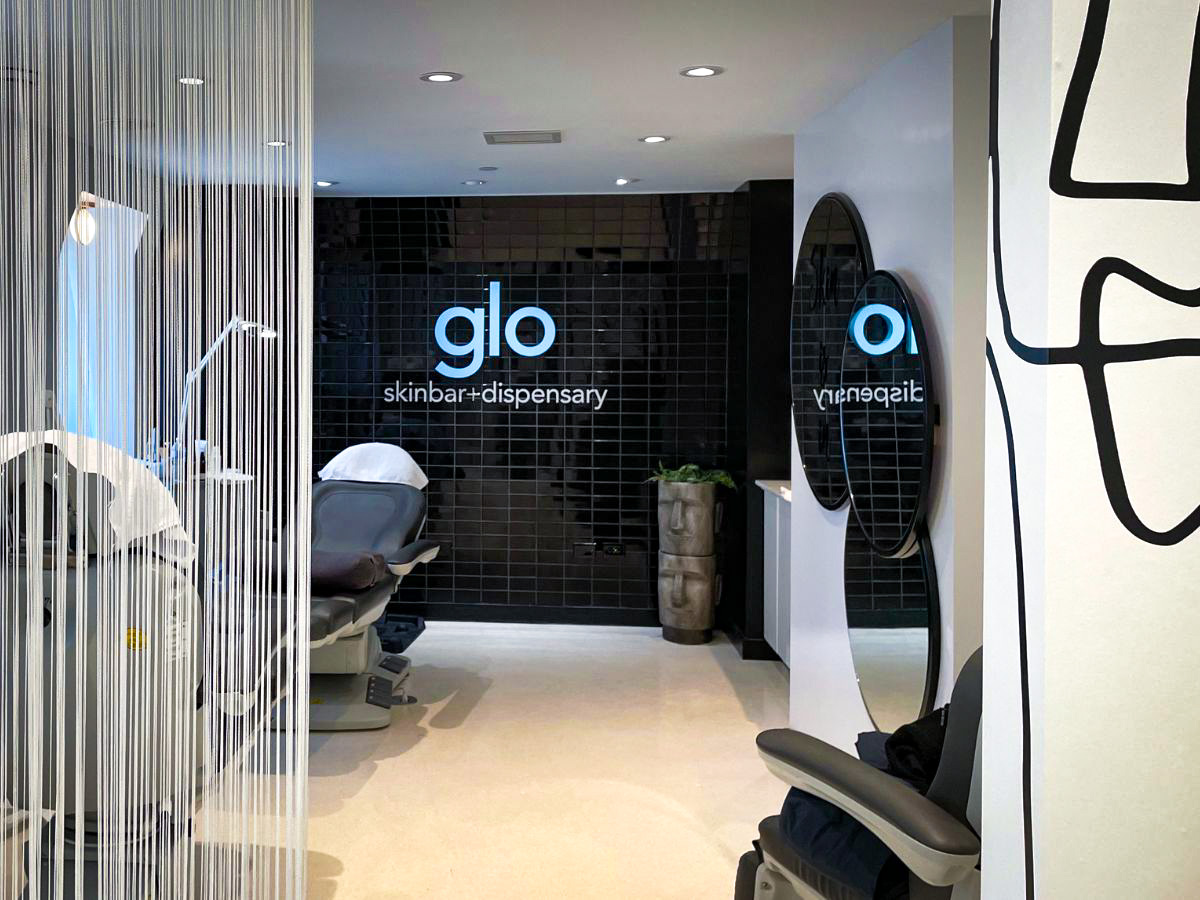 “Did you have your treatment today, because your face is actually glowing?”

As a 40-year-old male with a face that’s seen too much sun, whose skin routine involves face soap and whatever moisturize is handy, receiving this compliment from coworkers was certainly a first.

But such is the post-facial glow!

I had my first treatment at the new  Glo Skin Bar + Dispensary (aka Glo) inside Ten Spa at The Fort Garry Hotel yesterday. Let me tell you, my face hasn’t been this smooth in years.

I went with the 30-minute  Glow facial that I’ll detail below. Full disclosure: It was the best and most relaxing lunch break I have had in quite some time, and money well spent. I'll be back.

To set the tone, Ten Spa Director, Elena Zinchenko, explains the importance of investing in your skin:

“This is a lifestyle type of service… Just like going to the gym or practicing yoga, except at Glo you practice skincare. Your skin regenerates every 28 days, so to maintain that natural cycle we recommend monthly facials," said Zinchenko. "That’s why it works, because regular facials and high concentrations of active ingredients in your skincare formulas have a profound and lasting effect on your skin.”

Zinchenko also emphasized the ease and affordability of taking care of your skin at Glo.

“It's a highly effective and targeted treatment–with only the active parts of the facial included–making it a condensed and concentrated service.”

Glo (formerly The Face Bar) has been open for two months at its new location on the 10th floor of The Fort Garry. Glo Skin Bar + Dispensary is the reinvention of Face Bar, which was located just up the block on Fort Street.

While at Glo I made a new friend, Hélène Bilodeau, a long-time customer of Ten Spa who was receiving her Glo treatment at the same time.

“It [the facial] feels amazing and I feel like I’m going on vacation every time I come here,” said Bilodeau, before asking me to take a photo of her freshly radiating face. “I’ve been coming here [Ten Spa] for almost 20 years and now I really like Glo because it is more affordable and while I liked it where it was before, it’s nice to come back home here within the hotel.”

Unlike Ten Spa, where you come to relax and spend the day receiving luxury treatments and access to spa amenities, Glo allows you to get in & out (like on a lunch break–as I did) with no need to hop into a robe.

That said, you still walk off the elevator on the 10th floor and are met with the tranquil vibe and scent of eucalyptus that instantly reminds you of Ten Spa. There is complimentary tea, water and those famous Ten Spa cookies, and the option to add full spa access for an additional $45.

My Glo treatment, performed by the lovely skilled aesthetician Christina Agpalza, started with a quick consultation on my skin, where she highlighted a couple areas of concerns and discussed my pH levels.

This was followed by a thorough (and relaxing) cleansing, followed by a steam wrap to open my pores. During this wrap, she put those darkened tanning goggles on me, and turned down the lights, allowing the relaxation to take hold as I breathed in that sweet, sinus-opening eucalyptus.

With my pores open, the next step was light extractions, removing unsightly bits from my nose and face with light pressure as my pores were open to it. I was warned by friends that extractions would curl my toes and have me wincing, but actually, I found it rather invigorating.

Next was the oxygen mist. This most pleasant experience was like having a tiny cloud of vitamins and minerals blown onto individual sections of my face (I’m told 87 minerals in fact, along with enzymes and amino acids too) that my skin readily gobbled up. It was at this point I thought, ‘how have I never done this before?’

My skin was hungry for more goodness—and more was to come!

The following step was a customized glow pad that was like having a tiny, gentle sander work small patches of my face. Again, not at all abrasive, but rather stimulating. I welcomed each pass as if my face were a putting green being prepared for the Masters. Then, it was time to tighten up my skin, as Christina worked a cold roller along my cheeks, forehead, and upper neck, followed by a 10-minute mask of aloe and vitamin E.

Once the mask was removed the areas around my eyes received a complex to tone down the bags (I have young children, so they’re there), followed by a repairing lotion, and an SPF moisturizer.The Glow facial treatment finished off with an invigorating scalp massage, and neck stretch where Christina gently lengthened the vertebrae in my neck while massaging my temples (isn’t that just the best feeling–being stretched out like that?).

Altogether my face was treated with around nine products, all of which are from Epircuren, Algologie, Ampoules by Skin Accents, and Dr. Lilli Fan brand, all of which you can buy onsite and online.

And the results after this 30 minutes of bliss? A day later my face is still so smooth, and there’s still that glow. And by glow, I don’t mean a redness from the exfoliation. It’s like the opening followed by the cleansing of my pores, then the tightening of them after they were filled with all that goodness, has my face feeling like my five-year-old’s. I could only imagine what doing this on the regular would do!

There are three other facials on offer at Glo, including the Peel, the Purge, and the Lift. You never have to have the same facial twice because they can all be customized by adding one or more dermal boosts.

For locals and those of you who make regular trips to the city (say, those of you who have season tickets to the theatre or take in a Jets game once a month), a Glo membership really is the choice option–and a great gift idea, hint, hint. Every month you would get this treatment for $69, saving you $20 off the non-member pricing.

And it's not just a treatment; this is a way to improve your skin regularly. It’s also just so damn relaxing in a setting that always hits the spot.

If you are looking for that perfect gift idea for someone who is into self-care, this is it. You can also purchase gift cards (that don’t expire) from The Fort Garry Hotel that are good for all its services, from dining in the Oval Room, to Ten Spa, and Glo Skin Bar + Dispensary.

Glo is located on the 10th floor of The Fort Garry Hotel, Spa and Conference Centre at 222 Broadway, Winnipeg. For all the details here’s the website. You can also follow on Instagram @gloskinwpg