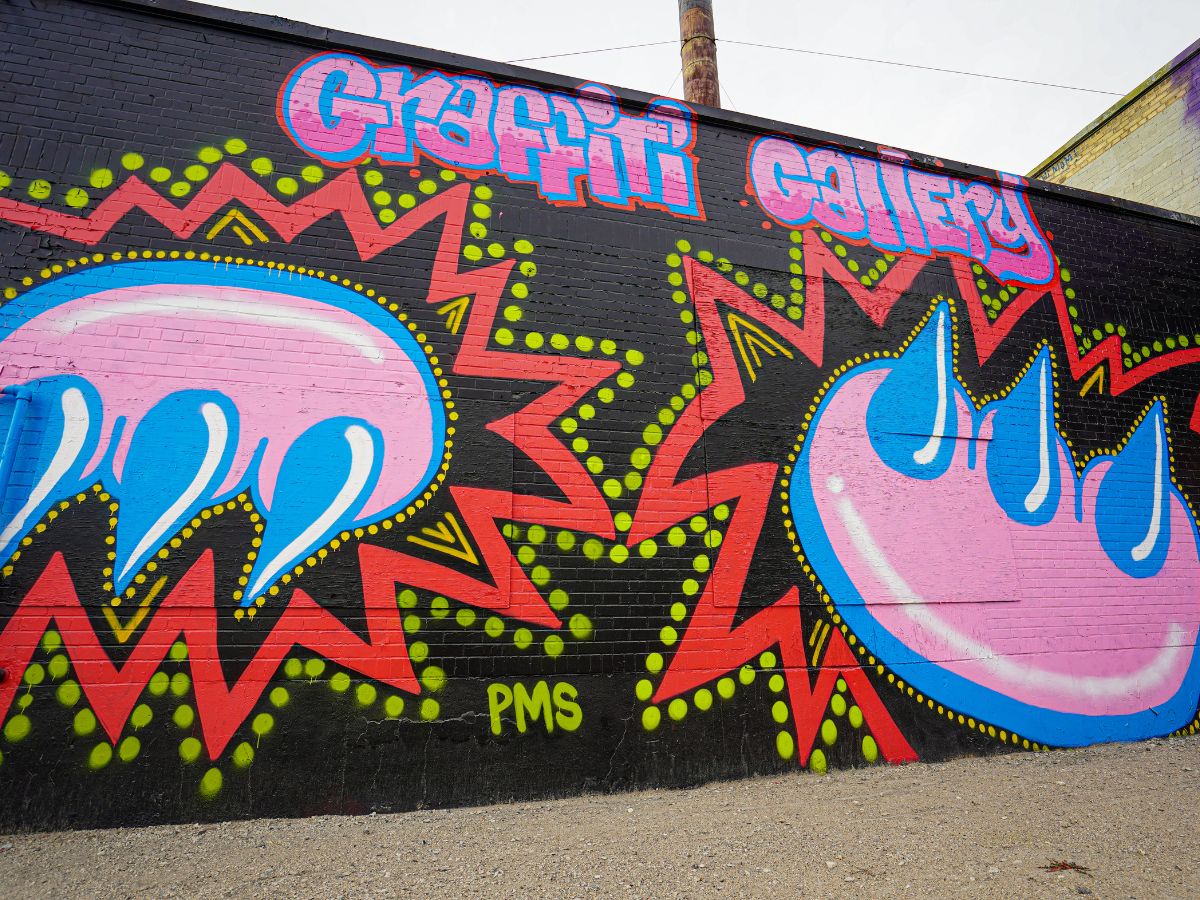 For nine years now, the fabulous folks at Synonym Art Consultation have been making Treaty No. 1 a more colourful place to be and see–and this past fall has been no exception.

Led by co-founders and creative directors Chloe Chafe and Andrew Eastman is everywhere you look with constant collaborations from all these local creative peeps and community partners Graffiti Art Programming, Urban Shaman Contemporary Art and Sunshine House, Synonym’s work. From huge murals that beckon above downtown and cover whole buildings to vibrant designs right below your very feet throughout Winnipeg.

Synonym also hosts and produce a number of fun, interactive and informative community events each year that range from drag festivals to creating music videos for local acts.

But above all, is the art, as Synonym continues to foster new mural artists here in Winnipeg to tell stories along the city’s walls, while also bringing in noted international artists to create incredible works that pop. Heck, even Woody Harrelson became a fan when he was last filming here.

Many of these works, including the above Harrelson-linked EN MASSE by artists Jason Botkin, MC Baldassari, Storm Angeconeb, Jade Rennie-Harper, Matea Radic, Jay Cabredo, and Takashi Iwasaki at 786 Main Street, were created as part of the annual Wall-to-Wall Mural Festival & Cultural Festival which they produce in partnership with Graffiti Art Programming every September.

This past September and October (the nice weather proved great for additional murals) Wall-to-Wall saw the creation of a number of new murals that jump out all over the city.

In Saint-Boniface, with its new partnership with Provencher Biz, there is "Manitoba Migrations" by Jazz Aline, which you can find behind Promenade Café and Wine; "CESSATION (Pigeon de passage)" by Yvette Cenerini, which was painted by Brianna Wentz and can be found on the side of La Belle Baguette; and "Park Car" by Evin Collis behind Café Postal.

On Sherbrook Street, there is "YEAR OF THE TIGER" by Kyla Yin, which can be found on the Sherbrook Inn, as well as “Efemena” by Nigerian interdisciplinary artist Efemena Ogboru. Both of these pieces were created in collaboration with the STEPS Public Art Residency Program.

Across the street, at 116 Sherbrook, you can also now find "as long as the river flows" by Métis & Libyan multidisciplinary artist Nadya Crossman-Serb.

In the above video, we showcase more of the new murals recently completed in September. This includes New York City’s Claw Money (aka Claudia Gold) mural at Graffiti Gallery, the splashy new pink façade of Chip’s Vintage at 143 Sherbook Street, and "Birt Saddlery" by Joseph Pilapil behind 474 Main Street .

For Claw Money (“that’s Claw Money, honey”–seriously, go see her solo exhibit Claw Money-Offside, which is on now until December 30 at Graffiti Gallery), this was a first time in Winnipeg.

“Like everyone else, I hadn’t been traveling much due to the pandemic, so I was interested in partnering with this youth organization [Graffiti Gallery/Synonym] for the kids. Because the kids have lost so much recently,” said Money, who first caught wind of Winnipeg via her friend Chino who has worked with Synonym to bring in many notable New York City graffiti artists over the years.

“I am painting my iconic claw, that I used to paint illegally [in New York] when I used to write graffiti. But now, it’s a symbol that means many different things for the beholder to interpret and has become a symbol of empowerment to so many people,” continued the artist and fashion designer.

“It’s important for people to see women doing this. And again, it’s for the kids. I’m a mom too and my brand is all about the kids.”

If Claw Money’s work looks familiar, it’s probably because she’s worked with just about every brand you can name.

On Main Street at McDermot, a few blocks from Claw Money's piece, is where you’ll find local artist Joseph Pilapil’s latest mural, "Birt Saddlery." Pilapil, who has a degree from Red River in digital multimedia technology, has been creating murals for around six years, with a number of them being part of Wall-to-Wall.


Locals will also recognize his work as part of  The Travelling Sign Painters, his full-time job with Bridgette Ellen. In fact, our good friends at Handcraft Creative have a doc featuring Ellen and Pilapil called Writing on the Wall, which you can check out here.

While talking about his latest mural Pilapil said:

“It’s kind of homage to the original Birt Saddlery sign, which remains on this wall. It’s a bit of a deconstruction of the sign itself, using elements and letters, collaging them all to the wall. I took elements and put them together as if I were to make a print piece but just made it more abstract and colourful, picking colours that would look really good in print.”

As you can read here, in her artist's description, the interweaving pink lines are meant to act like the folds in fabric, and that she was “imagining where the lines are hidden by a crease or overlap and following them from their start to their end.” The fabric theme is of course fitting for covering one of Winnipeg’s coolest clothing stores.

Let Synonym turn your building, office or home into a work of art

Pretty much, as long as there are bare walls to be found and building owners who continue to reach-out to spruce up their facades, Synonym will be there.

"We really need to encourage building owners that public art is a really positive thing for neighbourhoods and that supporting artists is positive—and we have had amazing support these past nine years,” said Chloe Chafe, while standing beside the "Birt Saddlery" mural at 474 Main Street.

“For instance, the developer who owns this building came to us. This is the best-case scenario: People taking old buildings, making them fresh, but then still gifting public art back to the community. And they’ve still kept the heritage part!” continued Chafe.

Synonym Art Consultation offers commissions and can even help curate art in your home or apartment.

We worked with them last year at our Economic Development Winnipeg office and the result was this gorgeous mural by Jazz Aline which you can find in our office’s lunchroom.

You can also find other recent commissions and more details here on that side of Synonym.

For a full list of this year’s Wall-to-Wall curators, click here. Here’s a map of all the Wall-to-Wall Festival murals from 2013-2021.