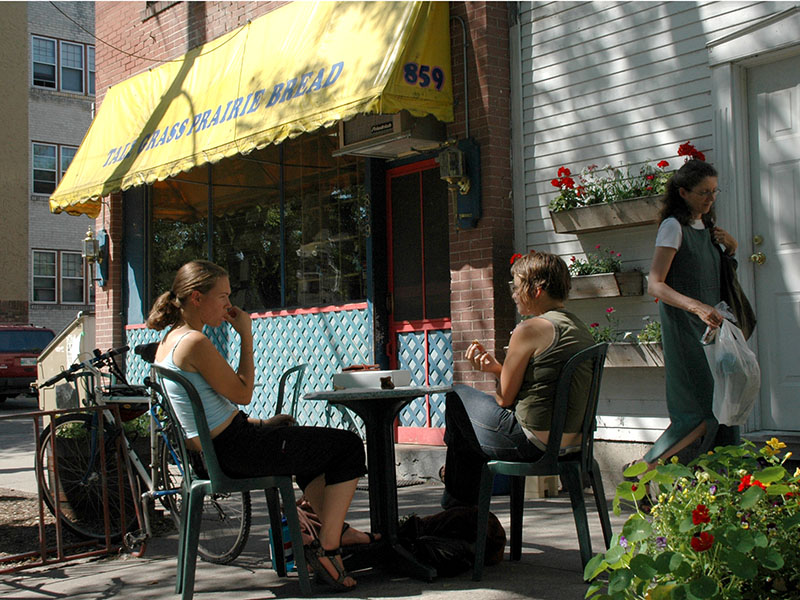 Wolseley is an incredibly diverse neighbourhood where the cool kids, families, artsy types, and all round good people call home. It’s affectionately known as “The Granola Belt” of Winnipeg and it features one of the most intact pre-1930 residential areas in Canada. It’s pretty much the poster child of whimsical charm in Winnipeg.

Visit the former residence of Canadian women’s right activist Nellie McClung, who lived in Wolseley at McClung House from 1911-1914. A blue metal oval plaque out front marks the spot while nearby, a plaque at Wolseley Avenue and Lenore Street recognizes McClung’s involvement in the social reform and women’s suffrage movements in the early 20th century.

On Westminster Ave and Maryland Street, the grand towers, stunning stained glass and dramatic neo-gothic architecture of Westminster United Church have made this place of worship a neighbourhood landmark since 1892. Catch regular concerts here by the Manitoba Chamber Orchestra or the church’s organ performance series featuring many international organists.

Located on the western edge of Wolseley, Omand Park is home to baseball diamonds, several pathways and Omand’s Creek. This creek is an important habitat for fish and other wildlife, including mallards, great blue herons, muskrats, jackrabbits, painted turtles and northern pike. Enter Omand’s Park off Ragland Road to explore this hidden park and experience wildlife in the middle of the city

You can’t say you’ve done Wolseley without a trip to the original Tall Grass Prairie, which opened on Westminster Avenue in 1990 and has since expanded to several locations across the city. The bakery supports organic agriculture and works closely with Manitoba farmers whose grains they stone-grind at their Forks Market location. Their cinnamon buns and Folk Fest cookies are legendary, so you’d be silly not to purchase them along with some excellent, old-school breads.

Another institution is De Luca’s Specialty Foods. This culinary emporium made its name selling imported Mediterranean food and all things related to great Italian coffee. Their deli serves premium meats, cheeses and take-away entrees, and the shelves are lined with pasta, sauces, produce and espresso. They have an on-site bakery; a wine shop with some great vintages and offer cooking classes. And if that isn’t enough, affable butchers – a couple of whom have brought their craft from the Old World – staff their meat counter.