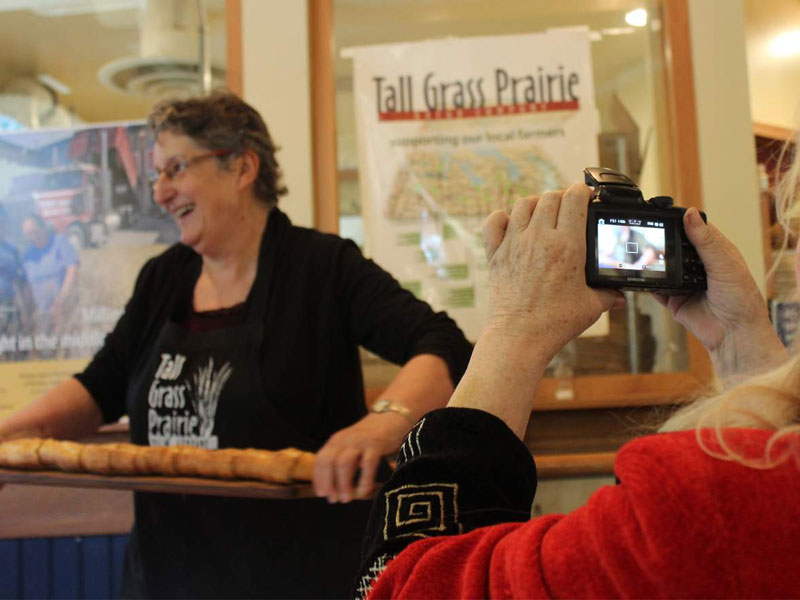 To say Tabitha is a pioneer in the farm-to-table food season is an understatement.

When Tabitha, along with her husband Paul and Lyle and Kathy Barkman first started Tall Grass Prairie in Wolseley 28 years ago, the banks doubted that anyone would pay a fair price for local, organically grown bread and baked goods. After selling out all their breads in under 10 minutes, they knew that the demand – and love for locally made products – was there.

In 2006 their story was lovingly told by the late-great CBC Radio storyteller Stuart McLean, while twelve years after the original location opened in 1990 at 859 Westminster Avenue, the Tall Grass team – led by Tabitha – opened a second, larger location in The Forks Market (along with a food shop called Grass Roots Prairie Kitchen) where you can watch the now primarily heritage grains (Red Fife and Spelt) get milled onsite, before being lovingly transformed into all manner of breads, pastries, pies and the like.

You can still regularly find Tabitha at The Forks location, where she takes pride in how communal the Tall Grass team has become, often employing new immigrants from diverse parts of the world. In 2005, a new partner/co-owner, Loic Perrot, a fifth-generation baker from Brittany, joined the team as head baker and has added to the Tall Grass roster, unbelievably flaky croissants and seasonal delicacies.

Tabitha remains Winnipeg’s biggest advocate for supporting local organic farmers – still buying wheat kernels directly from farmers to be milled in the bakery into flour, while telling all her customers how unique these gifts from the field are. These include the more than 6,000 lbs. of pumpkins they use every autumn, various fruits and vegetables – which are turned into preserves, soups and other products at Grass Roots Prairie Kitchen, and sunflower seeds, which they cold-press into oils onsite.