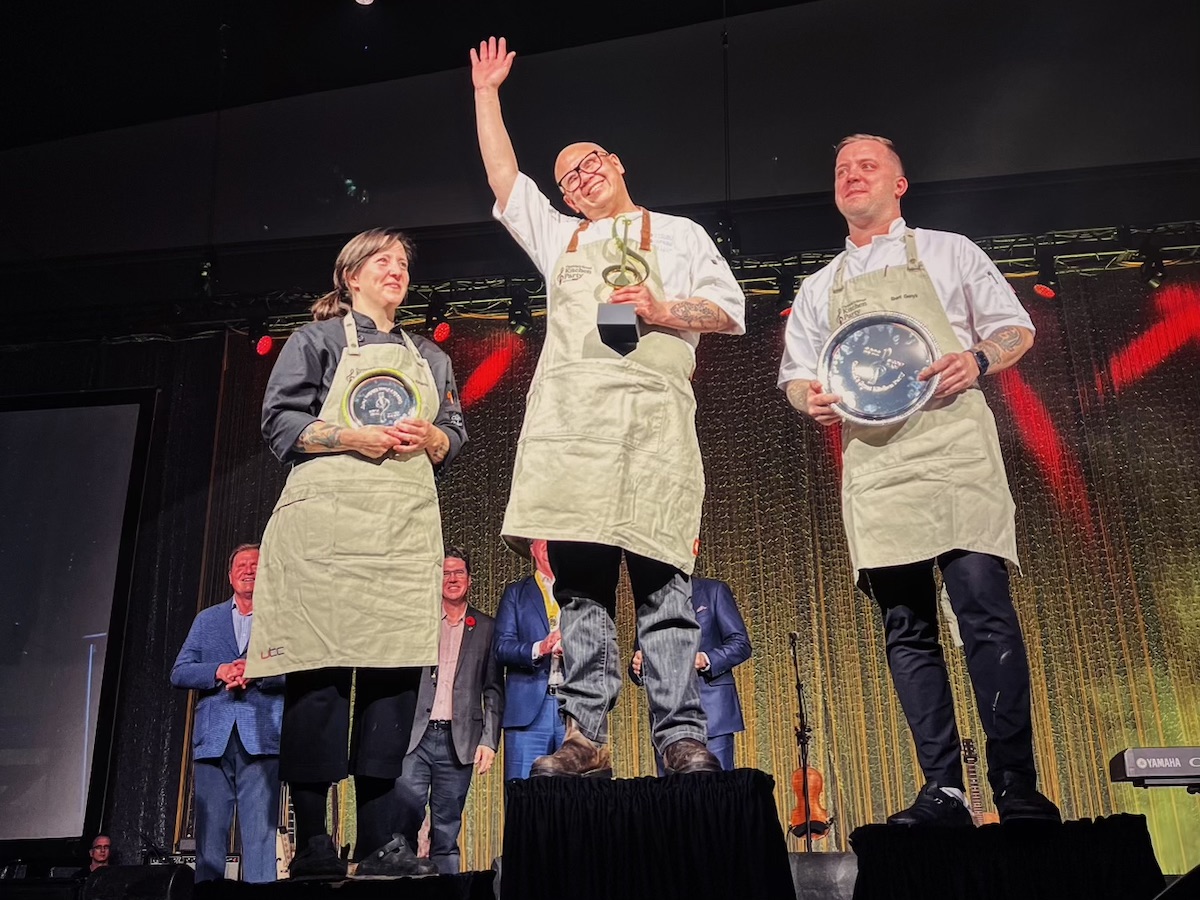 Chef Edward Lam is Winnipeg’s new Canada’s Kitchen Party champion and will go on to represent the city at the Canadian Culinary Championships in Ottawa from February 3-4, 2023.

The executive chef and co-owner of  Yujiro Japanese Restaurant, GaiJin Izakaya and Saburo Kitchen won gold on Friday night (November 4) at the RBC Convention Centre with his eye-catching dish of lamb tsukune with lamb tare demi-glace, braised winter melon with garlic scallop crumbs, anchovy yogurt with mint oil and a root veg puree on a seaweed buckwheat cracker. Chef Lam paired his dish (the pairing–using a Canadian wine, spirit, beer or cider–is part of the judging criteria) with Nichol Vineyard’s 2020 Syrah, from Naramata, BC. Lam had podium previously in 2014 when he took bronze.

Chef Brent Genyk of  Harth Mozza and Wine Bar took both silver and the people’s choice award for his vibrant cured albacore tuna dish that had a nice kick courtesy of Calabria chilies and an added richness from a preserved lemon aioli. Genyk paired it with Oliver BC’s Winemaker’s Cut 2019 Gruner Veltliner.

Bronze went to  Bonnie Day’s chef Pamela Kirkpatrick for her cipollini onion tarte tatin that warmed the soul (it was like a hug on a plate). The colourful dish featured a Saskatoon berry gastrique and a cracker made of local Trappist cheese and was paired with another local, Kerr Cider from Next Friend Cider, which is produced out of the beautiful new Low Life Barrel House by wine maker/sommelier Jesse Oberman. (Check out how he sources the apples here; it’s so cool).

The other three Winnipeg chefs competing all had strong showings too, including chef Thomas Stuart of  Thermëa with his potato pavé presented on a pool of verdant herb vichyssoise with a cube of sweet/acidic pickled onion gelée; chef Matty Neufeld of Prairie Kitchen Catering who used duck and cherries in a variety of ways, with the sliver of breast lying beside a brown butter foam that was so luxurious; and Canada Life Centre’s chef Richard Duncan, who had an ambitious plate featuring a bison and beef ballotine wrapped in prosciutto served atop of purees of black garlic and root vegetables.

Canada’s Great Kitchen Party returned to the RBC Convention Centre after a two-year hiatus. The last in-person event in 2019 saw chef Emily Butcher take gold, before finishing third at the Canadian Culinary Championships (this year she was a judge). That was the highest placing a Winnipeg chef has had on the national level since Makoto Ono won it all in the inaugural competition, which originally went by Gold Medal Plates (2006-2017).

National head judge, culinary advisor and all-round gentleman James Chatto has the full report on the Winnipeg leg (including more on Winnipeg's past in the competition), along with recaps on all of the other Canadian cities  here on his website.