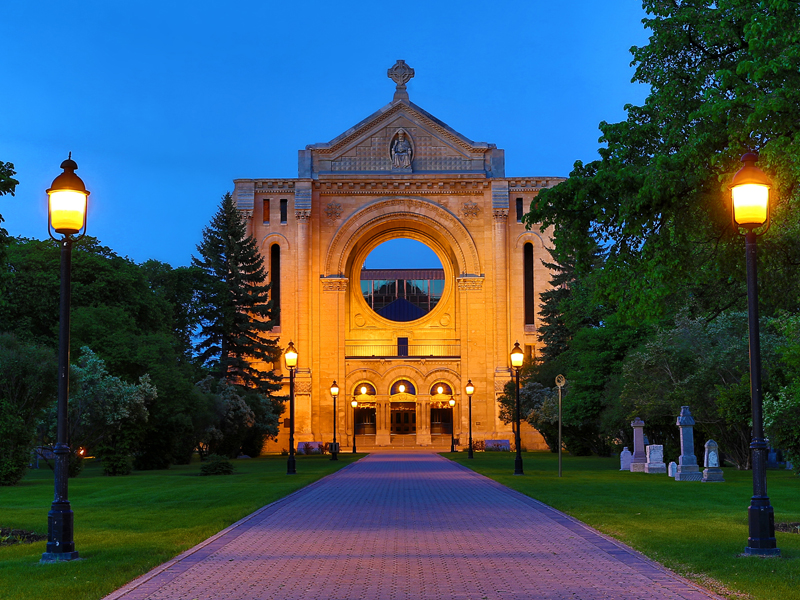 Exploring Winnipeg’s French Quarter, St. Boniface, is a lot like preparing a soufflé: don’t rush, take your time, and soon enough, you shall taste a sweet success! Fortunately, we have the perfect recipe right here so you can savour this neighbourhood in no time.

We should begin with a rendezvous at the fine food establishments that make their home in the French Quarter.

To start off, let’s do as the locals do and get you a café and a pastry shall we? For the café, let’s do  Café Postal, where the baristas know a thing or two about a strong cup served up foamy. From there, it’s on to  Le Croissant, whose owners from the Alsace region of France make the sort of flakey-come-melt-in-your-mouth croissant that will bring your taste buds to the foot of the Alps. (Word from the wise, get there before noon to make sure they still have a nice selection.)

It’s on for fine food at  Promenade Café and Wine whose traditional French eats, like coq au vin, beef bourguignon, duck salad and mussels are always delectable, as are the views from the dining room which look out over the Red River to the sexy  Esplanade Riel, the Canadian Museum for Human Rights and downtown Winnipeg’s skyline.

While you’re looking out at the Esplanade Riel, you may notice the formidable francophone restaurant  Mon Ami Louis, which not only serves up beautiful views from its terrific location on the bridge, but also manages to present some savoury French staples with a nice wine and beer selection. Pair the meal with a nice walk along the gorgeous bridge, and you’re in paradise (Please note:  due to its inventive location, Mon Ami Louis is only open from spring to fall).

If walking isn’t your thing, maybe you should take the train? While the  Resto Gare train doesn’t quite run anymore, it does deliver an elegant dining experience aboard the former train station and attached passenger coach. The stunning space is complemented by francophone music and authentic French cuisine, making it a perfect stop on your French Quarter tour.

From there, satisfy your sweet-tooth at  Chocolatier Constance Popp, whose confectionary creations have been featured for the stars at numerous awards shows, along with being a mainstay stop for visiting celebs and dignitaries.

With meals out of the way, perhaps it’s time to have an expert guide your way through these historical streets.  Tourisme Riel’s walking tour of St. Boniface will relate the stories behind the charming houses, along with bringing you inside and around its architectural marvels, such as the impressive  Cathédrale de Saint-Boniface. The Cathédrale’s surviving west-facing façade (most of the original structure perished in a fire in 1968) is an impressive example of masonry, while the inside of the cathedral is quite stunning with its vaulted ceiling and a somewhat whimsical/hippy-ish depiction of Jesus and Mary. The walking tour will also bring you to the handsome  L’Université de Saint-Boniface, whose grounds house an abstract statue of the Métis leader, folk hero and founder of Manitoba, Louis Riel, who started a rebellion and was subsequently tried and hung in Regina back in 1885.

Then, how about we burn some calories with a lovely stroll along the Seine River Trail (1.25 km) or the old St. Boniface Trail (9 km), both of which will have you lapping it up in nature? Or, if you want a more educational experience, may we suggest you delve into Manitoba’s colonial history inside the oldest wooden building in North America,  Le Musée de Saint-Boniface, and the former home of the Grey Nuns who arrived in the Red River Colony in 1844. This three-storey white board building is a treasure trove loaded with artifacts recalling the history of francophones and the Métis in Manitoba. The trials and tribulations of the birth of the province and the contribution of Métis hero Louis Riel are also documented inside. Nearby is the cemetery with the  Grave of Louis Riel.

More historical fun times can then be had at  Fort Gibraltar, a re-creation of a traditional North West Company fur trading post. In summer, the towering 18-foot fort walls serve as a prime venue for costumed interpreters who will bring you back to the 1800s, while in February it plays host to Festival du Voyageur, where children of all ages (and adults) can enjoy the joie de vivre of Manitoba’s Francophone, Métis and fur-trading history, replete with giant snow sculptures, voyageur games, maple taffy, the same aforementioned costumed interpreters, and lots of family fun over the course of 10 days.

While you’re taken back in time with costumed interpreters, why not follow along to  Maison Gabrielle Roy where one of the great Canadian writers is kept alive through a museum crafted out of her childhood home.

If history is less your thing, and you’d rather hone in on contemporary pleasures, certainly stopping by  La Maison des artistes visuels francophones will do the trick. They have a sculpture garden to peruse, an art gallery, and it is all housed in an alluring historic building that is a piece of art itself.

And when it comes time for some late-night entertainment, you can’t go wrong stopping by  Centre Culturel Franco-Manitobain for some soulful musicians playing the night out with Mardi Jazz, or enjoying their Cinéma Series of films that embrace francophone culture. In turn,  Le Cercle Molière is the oldest running theatre company in Canada, presenting live francophone theatre that comes equipped with a handy subtitling system for those anglophones out there.

If you want to savour and save, check out the St. Boniface Passport, which gets you admissions to five attractions/tours – including St. Boniface Museum, Maison Gabrielle-Roy Saint-Boniface walking tours (May-August), the Royal Canadian Mint and Fort Gibraltar, along with deals to local business – for one low price.