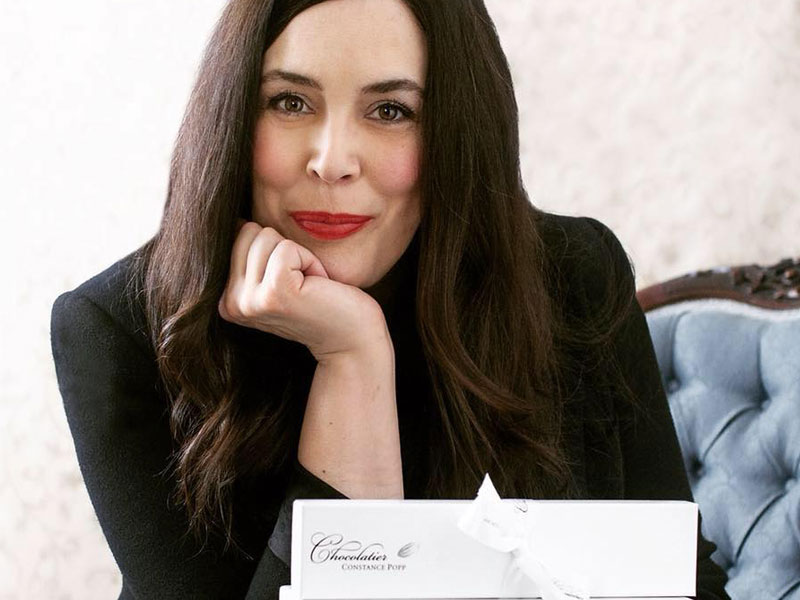 Her elegant chocolates have graced the gift lounges of the Golden Globes and the Toronto International Film Festival, and she’s since created custom molds for sale of the Canadian Museum for Human Rights. The award-winning chocolate “Manitobar” is cut into the shape of the province and made with Manitoba hemp seed, Ecofarm sunflower seeds, John Russell honey and Manitoba flax.

Constance is a bit of an eccentric, which is exactly what you are looking for in someone dedicated to his or her craft. Her chocolates and confections are certainly out of the box; utilizing locally produced ingredients combined with exotic single-origin chocolate (no preservatives or artificial flavours) in her eco-friendly, ethically sound shop.

Constance studied chocolate at the Barry Callebaut Chocolate Academy in Montreal for three years (she’s originally from there, but had been living in Winnipeg pursuing various occupations) before opening up her first Winnipeg location eight years ago in St. James. She’s since expanded in 2013 to a tourist and foot-traffic friendly shop in St. Boniface, just off the Esplanade Riel, where her window facing one of the city’s busiest streets flaunts her sweets – including chocolate structures based on icons like Winnipeg’s Golden Boy and the Leaning Tower of Pisa.

Constance is the winner of numerous entrepreneurial awards and has been featured in dozens of national culinary media stories. You can also find her and her talented team’s creations at gift shops around the city.