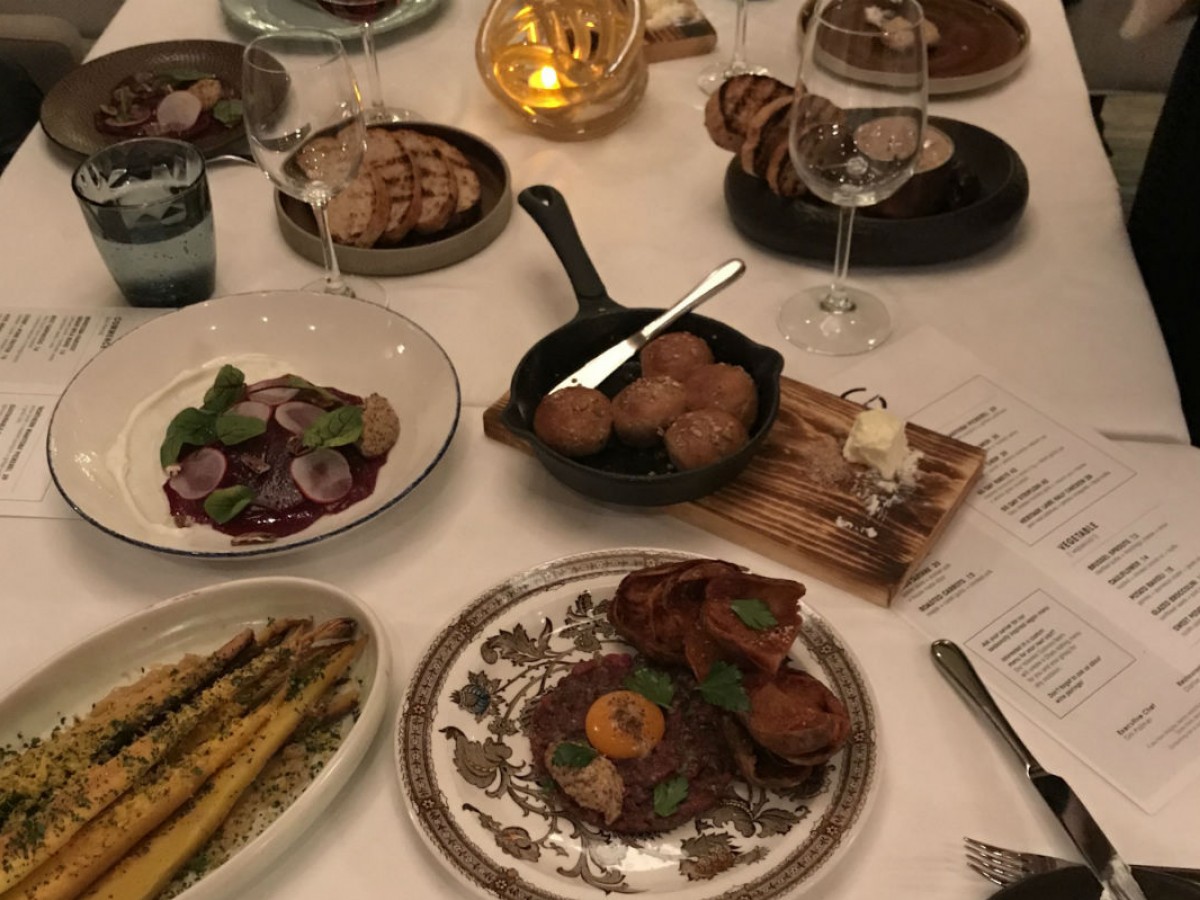 “It’s my grandmother’s recipe and it dates back to the Second World War,” said executive chef Tim Palmer, who along with restaurant chef Daniel Davyduke has created the new winter menu at VG.

“Back then they never really had anything to bake it in so she used to repurpose old jars, put the batter inside, seal it up, and then cook it in a water bath, and bake it that way,” Palmer continued.

The VG kitchen follows the same method, but to take it a few steps further they use Crown Royal Northern Harvest whisky for the toffee sauce, while topping it all off with a scoop of house-made sour cream ice cream, which slowly melts all over that warm, fluffy cake as it hits the table.

It tastes like you want food to taste in the winter – warming and nostalgic – but there’s also a luxurious element befitting the VG’s refined dining room. (Don’t let the fine-dining ambiance with its corresponding attentive service trick you into thinking VG is merely "a big night out" place; this new à la carte menu is full of shareable mains, many of which are tailored to hungry carnivores, so you can really get your fill without breaking the bank.)

We’ll also say that while much of the new winter menu seems like straightforward work, there is plenty of technique on display, showcasing the many local products that make up the plates.

They turn local organic cream into a lighter-than-air whipped butter, served with nearly gooey harvest grain milk buns that come piping-hot in a cast iron skillet. They are a great way to start if you're with a group, while couples or solo diners should be warned you’ll want to keep on popping these suckers and risk filling up before the main show begins.

That same milk is the base of the ricotta salata, paired with fried sage leaves on top of the sweet potato gnocchi, as well as the fromage blanc on the beet carpaccio, where Manitoban-grown beets have been poached in vinegar for a nice zing of extra acidity.

A cool bit of butchery can be found on the pork chop (local from HyLife), which isn’t really a chop at all but a belly that is still attached to the rib. That belly is rolled into a medallion, confited in pork fat, then seared to finish. It arrives resting on a silky parsnip puree, with carrots, baby Swiss chard leaves and a light pan sauce.

All the beef is aged in-house. The 55-day aged striploin is laid atop of a generous, half-inch tall line of creamy hominy grits that have a nice toothy texture. It is sauced with a reduced jus that adds extra umami to the beef. This mammoth portion is dwarfed only by the 40-day aged ribeye, which takes up an entire plate, is served medium rare, and comes topped with three robustly coated onion rings, all of it standing in a pool of black garlic jus.

Both beef dishes should be shared, while for sides the heritage roasted carrots – halved, maple glazed and cooked just to al dente, with microplaned smatterings of confit egg yolk everywhere – and the glazed and charred broccolini, served simply with lemon, are good choices.

Carnivores will also relish the bison tartare, which is assertively seasoned and topped with a Nature’s Farm egg yolk that has been pickled in salt and sugar. It comes with a mound of fried potato skins in place of bread, throwing shade at chips and dip.

An even more luxe starter is the foie gras whip, an ample copper pot of foie which has been turned into an airy mousse with a hint of maple sweetness to it. It spreads so easily on grilled sourdough, while the accompanying onion jam provides extra sweetness.

For fish, the sustainably sourced king salmon is seared until the skin is crispy and served on spinach puree with pan-roasted fingerling potatoes and braised celery. There’s also local walleye, which is also seared skin-on – something you don’t see often in Manitoba – before being laid over top grilled scallions and an onion broth.

To finish, Palmer also goes for even more nostalgia points with his take on a confetti square (aka a peanut butter marshmallow square). His takes a multi-coloured marshmallow base and covers it with a peanut butter mousse, whipped Chantilly cream, and crunchy toasted peanut and Skor-like toffee bits. It is ridiculous in the best way possible.

VG at Fairmont Winnipeg is open for dinner on Friday and Saturday only, from 5 p.m. to 9:30 p.m. It is also open for Sunday brunch (which is always banging; they do a build-your-own Caesar cart), from 11 a.m. to 2 p.m.