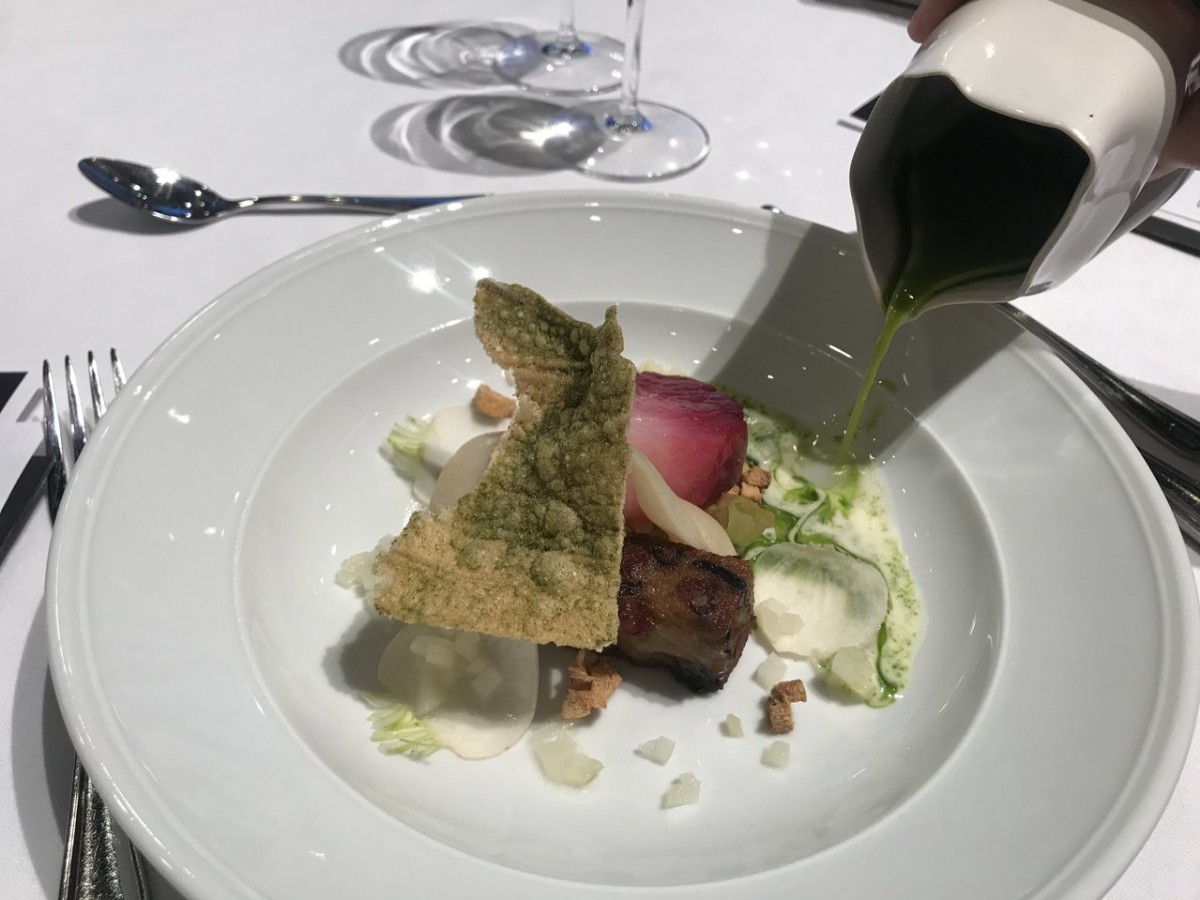 Butcher’s winning dish was a knockout and unlike anything we’d seen or tasted at previous Kitchen Party events. The two main components were a gently cooked medallion of cod and a crumbly turnip cake with Chinese sausage. It was bathed in a gorgeous turnip broth while all these magical bits floated around, including crunchy dehydrated cubes of local crabapple, slivers of turnip that could have been characters in a Mario Bros game, and ribbons of cabbage. There was a vibrant green herbed oil that spread out over the broth adding a further dimension of colour, while all us judges found gratification in every spoonful. Just a wonderful and unexpected dish. Butcher’s pairing with Penticton’s Tightrope Pinot Gris was also spot on, the acidity of the wine melding beautifully with all the bitter elements on her plate.

Rossi’s runner-up dish, which also won the people’s choice votes during the event, had us singing its praises too. His “Autumn rack of lamb” featured a perfectly cooked piece of loin, which was crusted with pistachio and perched on top of an arancini that oozed perfectly cooked creamy risotto studded with pear; fragrant with pungent notes from gorgonzola cheese. The sauce was a viscous lamb jus, while there a few shimeji mushrooms for added texture and earthiness. Again, like Butcher’s dish, it seemingly wasn’t super flashy, but the cooking was flawless and his pairing with Stony Creek Ontario’s Leaning Post Pinot Noir was a fine choice.

Duehrsen’s third-place dish was the most fragrant of the evening. It featured expertly braised pork cheeks in a rich mole negro, which was placed on top of an elotes polenta with smatterings of shaved radish, crispy chicharron crumble and pungent cotija cheese. There was also a coin of toothy beet under it all, which had been cooked in hibiscus. This was paired with Okanagan’s Red Rooster Gewurztraminer, which brought the needed acidity to the palate.

Rounded out the field were numerous fine efforts, in fact head judge James Chatto (whose full Winnipeg report you can find here) claimed before announcing the winners that it was the strongest Winnipeg field since the very first Gold Medal Plates (which was the original name of the event) in 2006, which was won by Makoto Ono, who would go on to win the Canadian Culinary Championships.

The Winnipeg Squash Racquet Club’s Cameron Huley (who had placed silver in 2011) served a technically sound brined and smoked salmon tartare, which was placed underneath a savoury sable; Minkyu Ru of Gaijin Izakaya made a real cool dish that featured wagyu short rib served on a marrow bone with kimchi and daikon, all of which was set on this super savoury “crunch mix” that was so my jam; Thomas Stuart of Thermëa (who took bronze last year) did a very refreshing cured trout dish with dabs of lively sea buckthorn; and Tim Palmer of The Fairmont Winnipeg served a complex duck dish with a dreamy carrot pureé, foie gras ravioli, and a super tasty duck reduction sauce.

Every chef had to pair their dish with a Canadian wine, beer or spirit (no one opted for a beer or whisky pairing this year as has been done in years past) while creating over 500 plates for everyone in attendance.

Canada’s Great Kitchen Party is held in 12 cities, with the winners going on to compete at the Canadian Culinary Championships in Ottawa from Jan 31 to Feb 11, 2020. Along with being a culinary showcase, the event serves as a fundraiser to provide youth with the means to excel in the fields of sport, music and cuisine.