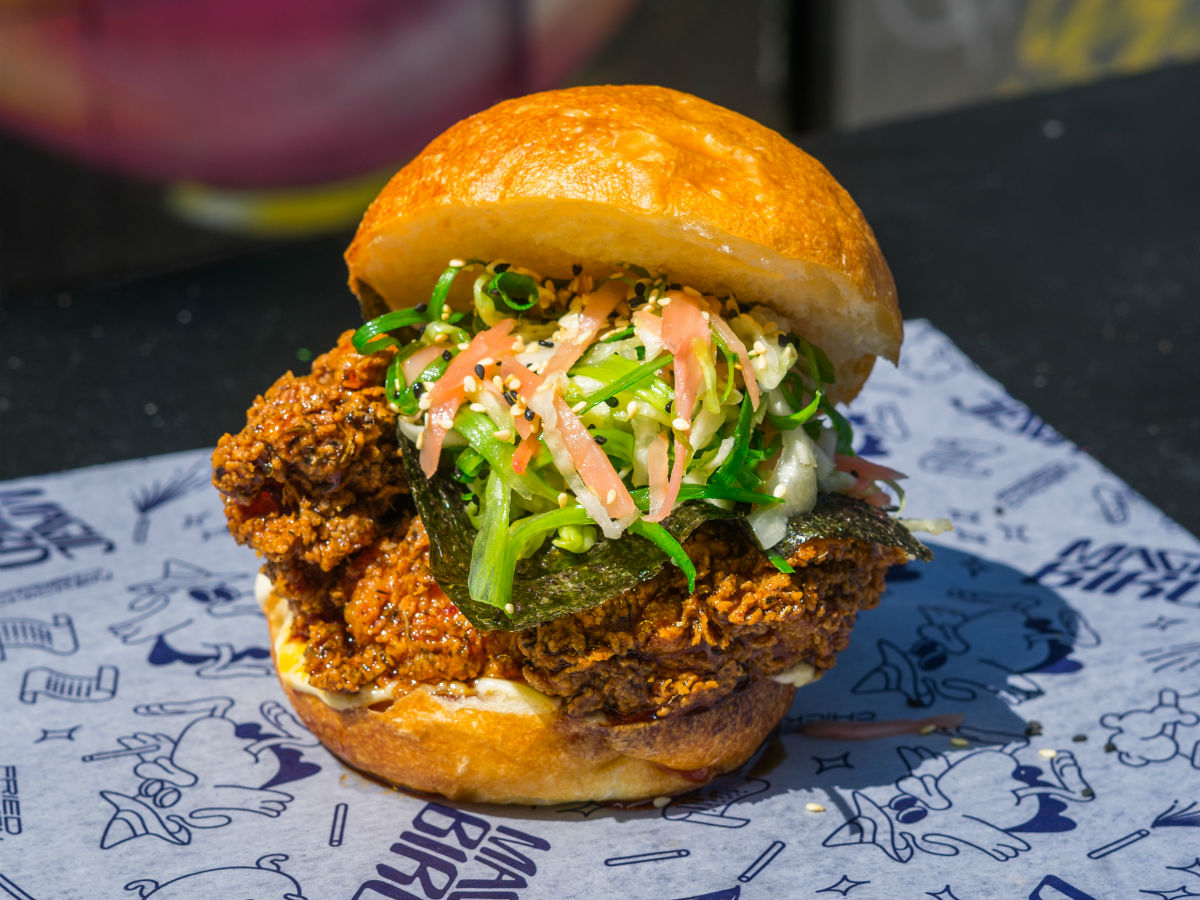 Magic Bird's sandwich of the week from August 12-18, the Hadouken (photo courtesy of Magic Bird)

Why we love their crispy chicken sandwiches, while we've also supplied a little fried chicken guide to Winnipeg too

In case you haven’t heard, hot fried chicken really is the word.

For instance, on Vancouver’s Commercial Drive you’ll generally find a lineup outside the door of the Downlow Chicken Shack (owned by Winnipegger Doug Stephen Jr. and his wife Lindsey Mann, who brought it as a pop-up last September to The Forks) for Nashville hot chicken, while a simple Google search will lead you to countless articles from Bon Appétit, The New Yorker, Thrillist, Food Network and a bazillion other websites that are talking about why this spicy dry rubbed bird, served on white bread with some bread and butter pickles (which dates back to the 1930s at Prince’s Hot Chicken Shack), is once again all the rage.

Here in Winnipeg, our favourite version can be found within The Handsome Daughter courtesy of chef Mike O’Connell and his Magic Bird Fried Chicken biz.

Magic Bird’s crispy chicken sandwiches are spectacular napkin-necessary forms of art. They are so balanced, bringing plenty of heat; you can order them as Country Fried (not hot), mild, hot (which is deceptively hot, coming on as a slow-burn like HBO’s Sharp Objects), or Scorcher, which I haven’t dared to venture), texture, acidity and creaminess, with pickled accoutrements and jaunty sauces that bring that zing.

Take, for instance, the main two that are always on the menu, The Classic – featuring bread and butter pickles, sweet chili sauce, and The Cheese Wizard – with bacon, cheese sauce, and pickled jalapeños.

While the first is a guaranteed winner, in my head the later sounds too much like a stoner food creation that shouldn’t work (chicken and cheese? baby please!). But yet, it does so well. There’s something about that creamy cheese layer, which has plenty of zip courtesy of the pickled jalapeños and underlining acidity that ensures it is not just rich on rich (like a poorly made mac n’ cheese #cheesesaucesneeddijon). Combine this with the spicy, crunchy chicken thigh, and the fluffy bun from Sleepy Owl, and it’s enough to make you want to high-five the kitchen.

Each week they also do a feature fried chicken sandwich, often pulling a Folklorama and highlighting flavours from around the world. Last week, this beauty was the Hadouken (see lede photo), in which the bird batter had a teriyaki glaze and was topped with pickled ginger, nori, dashi mayo and sesame slaw making for a sweet, spicy, crunchy wave of umami.

Pretty much every sandwich here is worthy of applause. So, we decided to asked chef O’Connell – who has over 12 years of cooking chops, including five years in Vancouver at spots such as Merchant’s Oyster Bar (where he worked with the aforementioned Stephens) and Supermarine, along with here in Winnipeg at both The Handsome Daughter and The Roost – why his fried chicken is so rad.

Here’s how that went:

I came back [to The Handsome Daughter] from The Roost, where I’d been cooking for a year and a half, as we’d always been looking to do a chicken place for the last couple years, but we could never find a space. So we just decided to convert the kitchen here and run it here.

We eat fried chicken all the time; it’s just something that everybody likes. It’s simple food that makes everyone happy and there’s nothing really pretentious about making fried chicken, which is something I like about it.

Why is there not a lineup outside the door (yet) for this crazy good bird?

I think it’s a Winnipeg thing, in that people just don’t line up*, or at least not yet. But we’re getting busy; we do constantly now have people waiting to be seated. We are a very small restaurant, with a small kitchen, and we can only pump out so much at once.

Our kitchen is tiny, so it took some time to get our systems in place, as we are really pushing the limits in there.

I do about 30 sandwiches a day and about 40 orders of strips, and then a ton of bone-in chicken.

What goes into making these magic fried chicken burgers?

For the chicken sandwiches we do quick tea-based brine. We use oolong. It’s more just to keep it juicy; it’s a southern thing but I change it up with a Chinese tea. We then dredge with flour – a special blend of flour and starches and spices – then buttermilk and dredge it again. Then we hit it with our dry rub as soon as it’s out of the fryer so the chicken has some hot oil on it which helps it all stick together.

We only use thighs for the sandwiches and we de-bone all the thighs in house, because you really can’t get anything of that size de-boned.

For the bun, we just refer to it as the Sleepy Owl bun. It’s not really a brioche, but it’s got that pillowy-ness, similar to a brioche but there’s just not as much butter in it.

Tell us why Cold Mike’s Hot Sauce is boss, and about the other condiments.

We were just looking to make something that was a really hot sauce that actually has some good flavour to it. One of my complaints about a lot of extremely hot hot sauces is that there is really not much in the way of flavour. So I wanted to address that.

For the other sauces we do, it’s really important to have lots of acidity to cut through something, especially when you are working with a lot of rich flavours. It’s just nice to have that note to make everything pop and be balanced. I can’t eat a lot of rich food without having something like that [a sauce with lots of acidity].

What should a tourist/first customer order for their first Magic Bird experience?

If you are a tourist in Winnipeg I’d say you have to have the strips with honey dill. Honey dill is just such an iconic Winnipeg-based sauce that people in other city’s just don’t understand. It [honey dill] just needs to go past Winnipeg.

The above interview has been edited for formatting purposes.

*While we agree with this statement, one notable exception would be Clementine, where weekend brunch lineups are a given, along Falafel Place, and fast food chains like Jollibee.

For more amazing fried chicken dishes in the city, may we suggest:

Merchant Kitchen (314 Donald Street) – The Korean Fried Chicken here is excellent, particularly the gochujang and sweet soy-based sauces that come with it. Great for a crowd.

Clementine (123 Princess Street) – The fried chicken on toast, the flavours of which tend to change seasonally, is a masterpiece. The chicken has a lemony, herbaceous brine (we’re guessing much like this Thomas Keller one from Ad Hoc), while the two sauces are always sweet/spicy, and creamy (for instance, the current incarnation comes with a spicy maple syrup, and smoked onion dip) while the pickles are perfect.

Brazen Hall (800 Pembina Highway) – This brew-pub is always busy, and on top of excellent burgers one of the more popular dishes is the fried chicken, available as crispy or Nashville Hot, served on grilled house sourdough with pickles.

Candy’s Chicken (2231 Henderson Highway) – The classic. Just a counter slinging chicken in North Kildonan. People drive from all over the city for it.

The Tallest Poppy (103 Sherbook Street) – When your morning calls for chicken and waffles you head to The Poppy. The chicken is southern-style, while the waffle is à la Liège. It's also available on the dinner menu with mashed potatoes and collard greens.

Mitzi’s Chicken Finger Restaurant (250 St. Mary Avenue) – For over 40 years this Westernized Chinese food restaurant has been setting the gold standard for chicken fingers and honey dill in the city. They’ve even made it to the pages of Saveur, while you really must read David Sanderson’s 2018 article on the place right here.

deer + almond (85 Princess Street) – The chicken fried chicken sandwich. A little guy you can get at lunch which has been covered with a full article on PCG here. #lovethatlittlebun

And please note: on Peg City Grub we don’t mention chains – only unique Winnipeg-based businesses that are owned and operated here (hence why Jollibee, Max’s and Popeye’s aren’t on here).