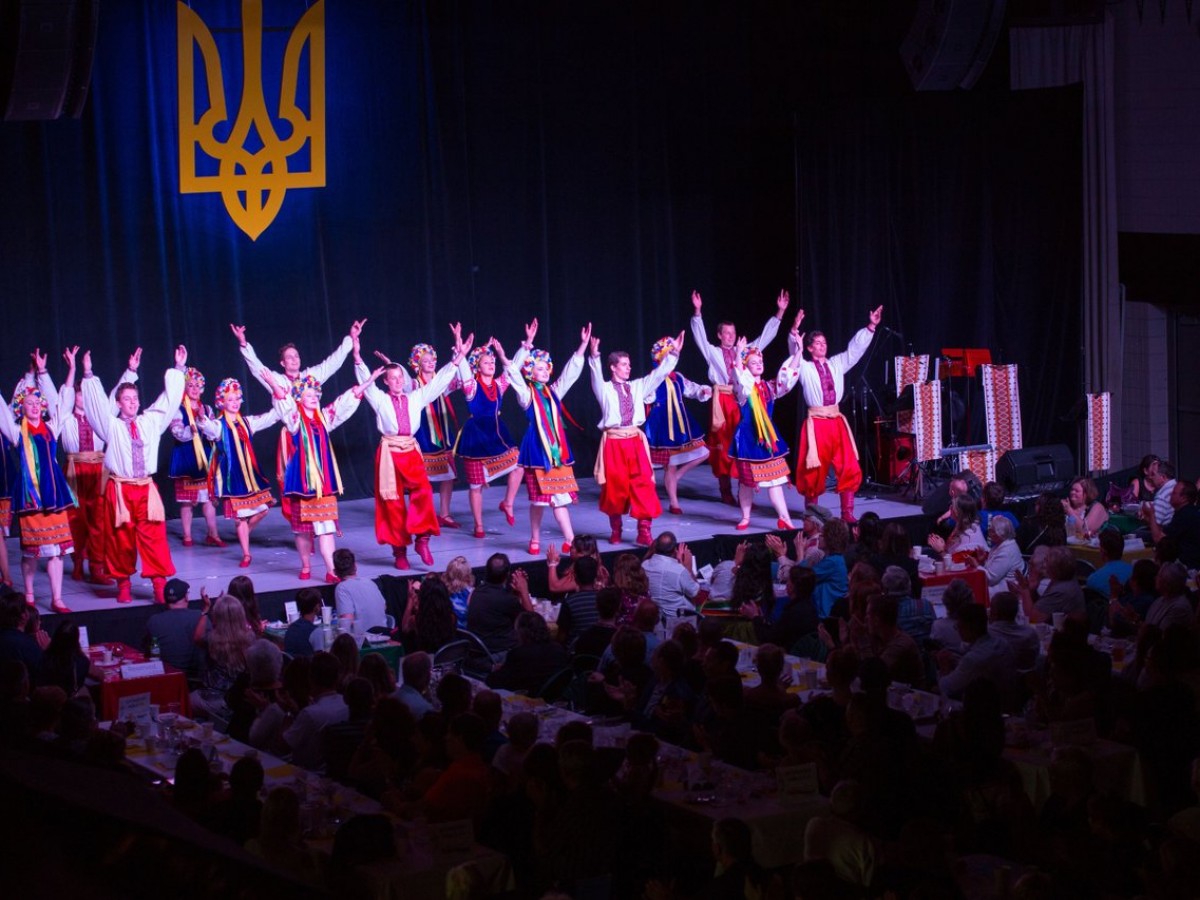 A packed house at the Ukrainian Pavilion (photo courtesy of Folklorama)

Our extensive guide brings your tastebuds to 40+ pavilions

Folklorama, the world’s largest-and longest-running multicultural festival turns 50 this Sunday (August 4) and we’re here for it – particularly the food!

While you can always find diverse dishes in Winnipeg (particularly in the West End), a city where over 100 languages are spoken, Folklorama really brings home how worldly this place is.

Quite a few of the 40+ participating pavilions fly in entertainment from their respective countries to compliment all the local talent, meaning there is much to chew over on stage – be it song, dance or athleticism – while you devour delicious national dishes and drinks.

Here’s just a couple picks on what kind of cuisines you’ll find during the near two-week festival.

European cuisines that might not be on your radar

During week one, you’ll find a number of pavilions – particularly representing Central and Southeastern Europe – that are underrepresented on the Winnipeg restaurant scene or not represented at all.

For instance, if you are hungry for Hungarian (#sorrywehadto), head to the Budapest Pavilion (#3, St. James Civic Centre, 2055 Ness Avenue), where you can slurp a savoury tomato, pepper, and paprika stew (guylás) before diving into all manner of fried doughs (lángos) that are all hand-kneaded and topped with plenty of sweets. If that’s not sweet enough, be sure to try the Hungarian wines and brandy (palinka), which rarely make appearances on local Liquor Mart shelves.

There are also plenty of other European options like Portugal (#17, week one, Portuguese Cultural Centre, 659 Young Street), which, given Winnipeg’s large Portuguese population, is guaranteed to be rocking. Food here includes plenty of pork and much in the way of seafood and Iberian beer. (On week two, you can also experience the northern Portuguese province of Minho #25).

Spain, Ireland and the UK are all represented in week one, while week two brings even more Ireland, the Hungarian province of Pannonia, Italy, Scotland, Poland, Russia, Romania and so many more.

Africa is well-represented during week one (#1, Holy Cross Gym, 290 Dubuc Street), with a whole pavilion noted for dishes and entertainment representing primarily the Sub-Saharan side of this huge continent. Here you’ll be able to get West African dishes like suya (spicy meat skewers), fried akara and plantains, and Jollof rice.

Both Ethiopia (#9, Ethiopian Society of Winnipeg, 215 Selkirk Avenue) and Egypt – which is brand new for 2019 (#7, University of Manitoba - University Centre, 210 -224) have their own pavilions for week one too. At the former, it’s all about getting your hands on some injera, which you can use to scoop up delectable platters of slowly stewed vegetables and meats. Relish this while watching incredible dancing called Eskista, which requires some incredible shoulder dexterity and rhythm. At the latter, you can expect to celebrate ancient history through song, dance and drumming, while eating what we guarantee to be the most carb-loaded dish during Folklorama – that being koshari, a mix of lentils, chickpeas, rice and macaroni. You can follow this up with shawarma platters and plenty of sweets made of buttery, flaky pastry.

During week two you should also check out South Sudan (#43; Sudanese Community Cultural & Resource Centre, 129 Dagmar Street). The city has an ever-growing South Sudanese population and their food – which features plenty of stewed okra – is so delicious.

If you’ve yet to discover the brilliance of all the fermented flavours, spicy hits of gochugaru and gochujang, and textured dishes of Korea, you are missing out. On that note, make note of the the Korean Pavilion (#15, Masonic Memorial Temple, 420 Corydon Avenue) during week one, where kimchi, bulgogi (barbecued short ribs cut lengthwise) and soju paired with Tae Kwon Do demonstrations and traditional fan dancing is a must.

The India Pavilion (#13, week one, RBC Convention Centre) is also always hopping, with plenty of curries, sweets and Old Monk rum, while individual regions like Punjab and Tamil culture are both represented during the festival.

The venue of the Chinese Pavilion (#27, week two) within Chinatown’s Dynasty Building (180 King Street) really can’t be beat, where you can enjoy a vast array of dishes from this massive country, which was an original pavilion back in 1970.

Japan (#32, week two, Petrus Hall, 2624 Inkster Boulevard) is bringing in a drum group from Osaka, while you can have the privilege of tasting sushi from the now-retired master himself, chef Ono.

Given that Tagalog is one of the most-spoken languages in Winnipeg, the Pearl of the Orient Philippine Pavilion (#37, week two, RB Russell Vocational School, 364 Dufferin Avenue) is guaranteed to be great – plus who doesn’t love pancit?

In 1970, during the inaugural Folklorama, there were eight pavilions representing 21 cultures. Of these, the original four countries/regions below have continued to stage a pavilion ever since:

Considering Winnipeg is known for its large Ukrainian population (and cuisine!), you better believe that the Ukraine-Kyiv Pavilion (#45, Maples Collegiate, 1330 Jefferson Avenue) – which has been going strong since 1970 – is going to bring, being another pavilion celebrating half a century.

Here’s the inside scoop from our own Andrea Slobodian, who will be volunteering at the pavilion, which is running during week two (August 11-17):

“The food will be Catered by Naleway/Perogy Planet and the menu features favourites such as borshch, varenyky (perogies) and kovbasa (garlic sausage), followed by deep-fried blueberry dessert perogies. A new snack menu by Kozak Foods in the pavilion’s marketplace introduces a popular Eastern European street food, chebureky (a lightly fried, flaky half-moon shaped turnover filled with pork) and lip-smacking delicious pampushky (donuts filled with poppy seed or plum jam). The pavilion has partnered with Winnipeg Brew Werks to create a special craft beer “Golden / Золоте” with a unique mix of Ukrainian hops and Canadian Prairie malts. A limited number of cans will also be available at Manitoba Liquor Marts. To keep the party going, the pavilion will host a late-night zabava (polka party) at 11:30 p.m. on Saturday, August 17, with two local bands, Budmo and Sloohai.”

The Greeks (#12, RBC Convention Centre, main floor) are one of the original four pavilions, so you can expect them to bring the bouzouki and baklava (and perhaps some plate smashing?) as they too mark 50 consecutive years. On top of that, accompanying Kefi dancers will be plates of lemon potatoes, spanakopita, gyros, and tzatziki as far as you can see.

Another pavilion that is marking 50 years is Scandinavia (#18, Scandinavian Cultural Centre, 764 Erin Street) where the Nordic countries of Sweden, Norway, Iceland, Finland and Denmark will make their mark with all sorts of smørrebrød, heaps of herring and those thin crispy waffles which you can wash down with an excellent selection of vodka and beers.

The other pavilion still going strong for 50 full years is Germany (#11, week one, German Society of Winnipeg, 121 Charles Street), which always has great late night weekend parties and plenty of Bavarian beers to pair with all that bratwurst.

Tourism Winnipeg also has another inside scoop about the Mexican Pavilion (#34, week two, RBC Convention Centre, third floor) from our very own Alberto Velasco-Acosta, who says this: “This year’s focus is going to be on the Día de Muertos (Day of the Dead)… so we are building altars and we’ll have candles… We are focusing on the central states that carry the tradition on – including my state, Michoacán – and this will be one of the best places to find Mexican food [in Winnipeg].

We have people from the community who are cooking and baking everything, and we try to focus on traditional dishes from the states that we are highlighting. We will be serving albondigas en salsa de chipotle (meatballs in chipotle sauce), esquites (corn with cream, queso fresco and cayenne pepper) and pastel de tres leches (a highly moist cake) among other regional dishes. It’s a cheaper way to travel to certain regions of Mexico!”

More Latin American flavour can be found by way of Argentina (where tango performances are paired with plenty of beef and all Messi jerseys are welcome), Chile (featuring all sorts of empanadas), and El Salvador – where, you’ll find us eating as many pupusas (with extra sides of curtido) as we can.

While we’ve run out of room to go through all the pavilions, including those of Turtle Island – which include French Canadian, First Nations and Métis; Israel – which you know will have the best hummus (sorry Greece); the Caribbean – whose stages will be nearly as sweat-inducing as the spicy jerk dishes and patties; and Brazil – which really sells itself with its capoeira and cachaça cocktails, there’s a few things we should point out in navigating your nights.

If you are looking to have the logistics handled for you, be sure to book a tour, which you can do so here. These will get you: air-conditioned transport between pavilions; admissions to multiple venues; reserved tables; no lines; progressive meals; and so much more. Plus, they are so reasonably priced!

Finally, please party responsibly. Yes, as indicated above, the majority of the pavilions all sling drinks from their countries/cultures, but there are plenty of delicious, traditional non-alcoholic options too.

Now go get ready to Folk hard for the big 50.