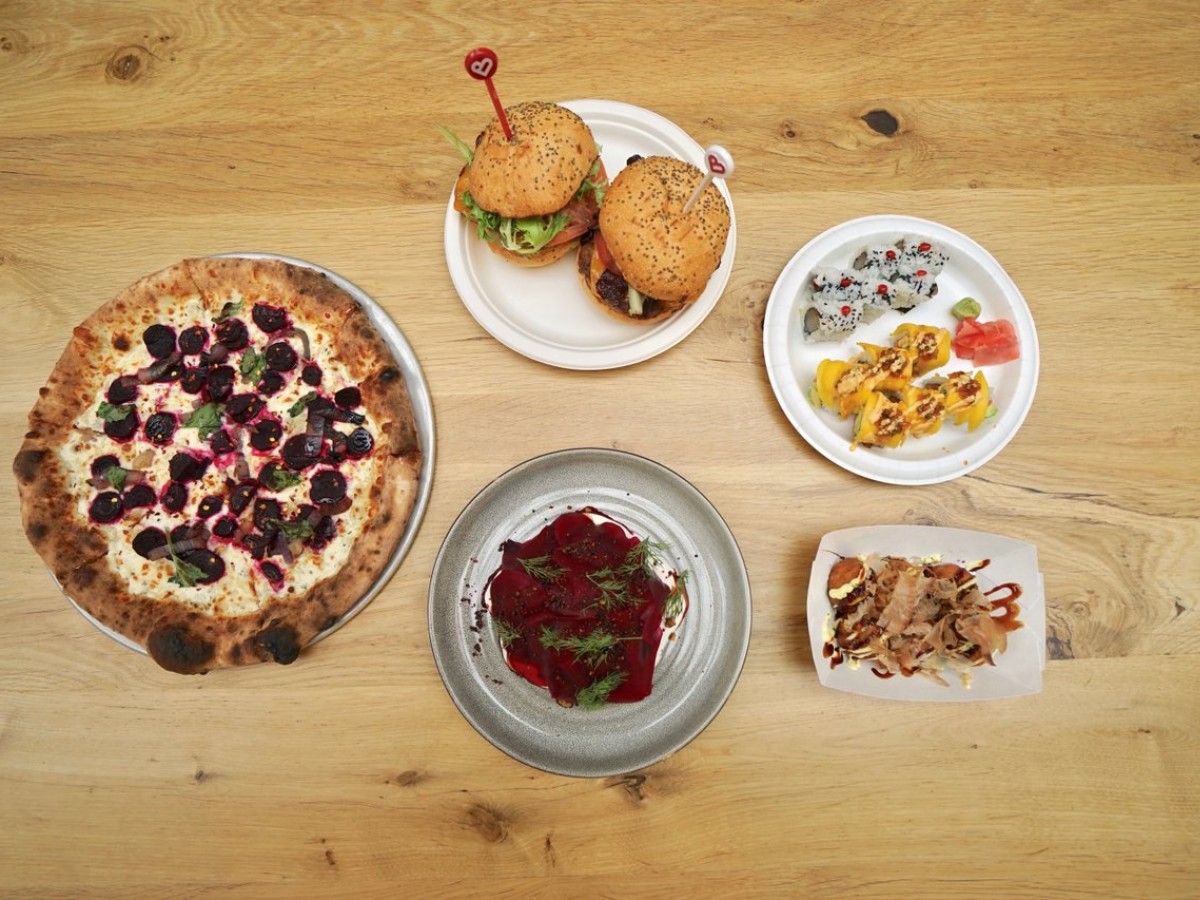 We’re often asked, “what’s the best spot in the city to eat with a group that has unique and differing tastes?”

The easier answer is, The Forks, whose food hall features kiosks from some of the city’s best food trucks and restaurants,* along with The Common – the public bar that serves 20 wines and 20 beers that have been selected by one of the world’s best sommeliers (more on her later).

There’s no other spot where, all under one roof, you can get the crispest fish and chips (Fergie’s, an institution since 2004); one of Canada’s best pizzas (Red Ember Common); a freshly ground boozy coffee (Fools & Horses); a pastry that will make you do a happy dance (Tall Grass Prairie); some of the prettiest macaroons you’ve ever seen (Jenna Rae Cakes); banging burgers that have you covered from grass-fed local beef to vegan (NuBurger); a skewered meat sandwich that has won Food Truck Wars for the past four years (Kyu Grill); poke, rolls, melt-in-your-mouth toro and a terrific takoyaki (Fusian Sushi); and house-made ice cream sandwiches that you can tailor to your tastes (Neon Cone).

Plus, there’s acclaimed chef Scott Bagshaw’s Passero, which made enRoute’s long list for Canada’s best new restaurant (2018) and was recently (December 2018), given a notable three-star (out of four) review in the The Globe and Mail. Passero specializes in housemade pastas and an ever-evolving beef tartare that is always money. Here, within its own dining room which faces the market you can also expect impeccable service (they take resos too), a vibrant wine list, along with some excellent sandwiches at lunch (when it runs as Corto, with counter service) and the liveliest little salad, composed of cherry tomatoes, basil, grapefruit and blood orange, crema and chili vinegar that we always have to order.

If that’s not enough for you, here’s just a few more reasons why The Forks should be your everything all under one roof destination for gourmands this spring.

Chef José Strum comes from Argentina, a place where beef is part of the culture. His kiosk was formerly known as Simon’s Empanadas and Co., where he served up some of the best handpinched empanadas you could get, including a spinach and ricotta version that is simply sublime, all served with a rustic chimichurri sauce that has just the right amount of zing.

While empanadas are still on the menu, Strum recently rebranded on March 4 and overhauled the rest of the menu to create Simon’s Steaks, a true bastion of beef. Along with a fine selection of steak sandwiches that were on the previous menu (the Gaucho, featuring tenderloin with chimichurri, horseradish mayo, and a sunny side up egg, is about as good as steak sandwiches get), you can now get either a 20 oz ribeye or 16 oz New York grilled to order (and ideal for sharing) with baked potato and a daily assortment of vegetables. On top of that, for individual dinners there’s several steak frites options, with cuts that include flat iron, tenderloin, skirt and sirloin ($15-$18), along with several chicken dishes, and some new steak house-inspired sides, like creamed spinach and salads.

You can find the whole  new menu here.

Wine and food pairings with one of the world’s best

The aforementioned person who is one of the world’s best sommeliers, that would be Véronique Rivest, whose accolades include Canada’s Best Sommelier (2006 and 2012), Best Sommelier of the Americas (2012), and second place at the World’s Best Sommelier competition (Tokyo, 2013). The Quebec-based Rivest comes to Winnipeg quarterly to select the new wines and beers along with training the bar staff. When she’s in town to do so, The Forks hosts UnCommon Pours, which sees Rivest share the thought-process behind the new picks while dispensing samples and sharing tasting notes.

Happy Monday! Hope everyone had a nice weekend! #MeetMeAtTheForks #thecommonwpg

The next UnCommon Pours (VO5:Spring Wine 101) takes place on April 25 and 26, with two different formats. On April 25 at 2 p.m. Rivest will host Wine 101, an introduction to wine tasting with three reds and three whites for $40, where budding oenophiles can learn things like the subtle nuances that separate a pinot from a gamay (hooray for Beaujolais!). The second format (April 26, 5 & 6 p.m.), the Spring Beer + Wine List Launch, will get you a flight and a guided tasting for $20.

Bike + Beer… plus the new lounge

While we’re on drinks, we’d be remised to mention the Bike + Beer events, because everyone in the know knows that there’s no better beer then the one you can have after a workout (#ourkindofcooldown). As of recent, The Forks Pavilion (formerly Muddy Waters), has become a pop-up spin-class location for The Community a few times a week. For Bike + Beer (Thursdays), they are inviting you to connect with your classmates (after sweating your butt off after 45 minutes of spinning) with a post-spin beer at The Common.

Find your NEW favourite place to chill / study space / quiet corner / cozy meet up spot... upstairs next to McNally Robinson booksellers . Thanks to our friends at @eq3 for making it look so lovely. p.s. You are welcome to bring beverages from The Common upstairs while you lounge! #MeetMeAtTheForks

And hey, did you know that The Forks also has a new lounge all decked out by EQ3 furniture that you can chill in? It’s located on the second floor of the market between Jenna Rae Cakes and McNally Robison, and – much like the whole building – is covered by the same liquor license as The Common, meaning you can bring your drinks upstairs and find yourself a lounger with that lower lumbar support you are looking for.

For more of what’s going on culinary and events-wise at The Forks check out their main website, theforks.com

*Are you a budding chef or established restauranteur? The Forks is seeking Expressions of Interest to become future Food Hall tenants. Submit an ROI here.