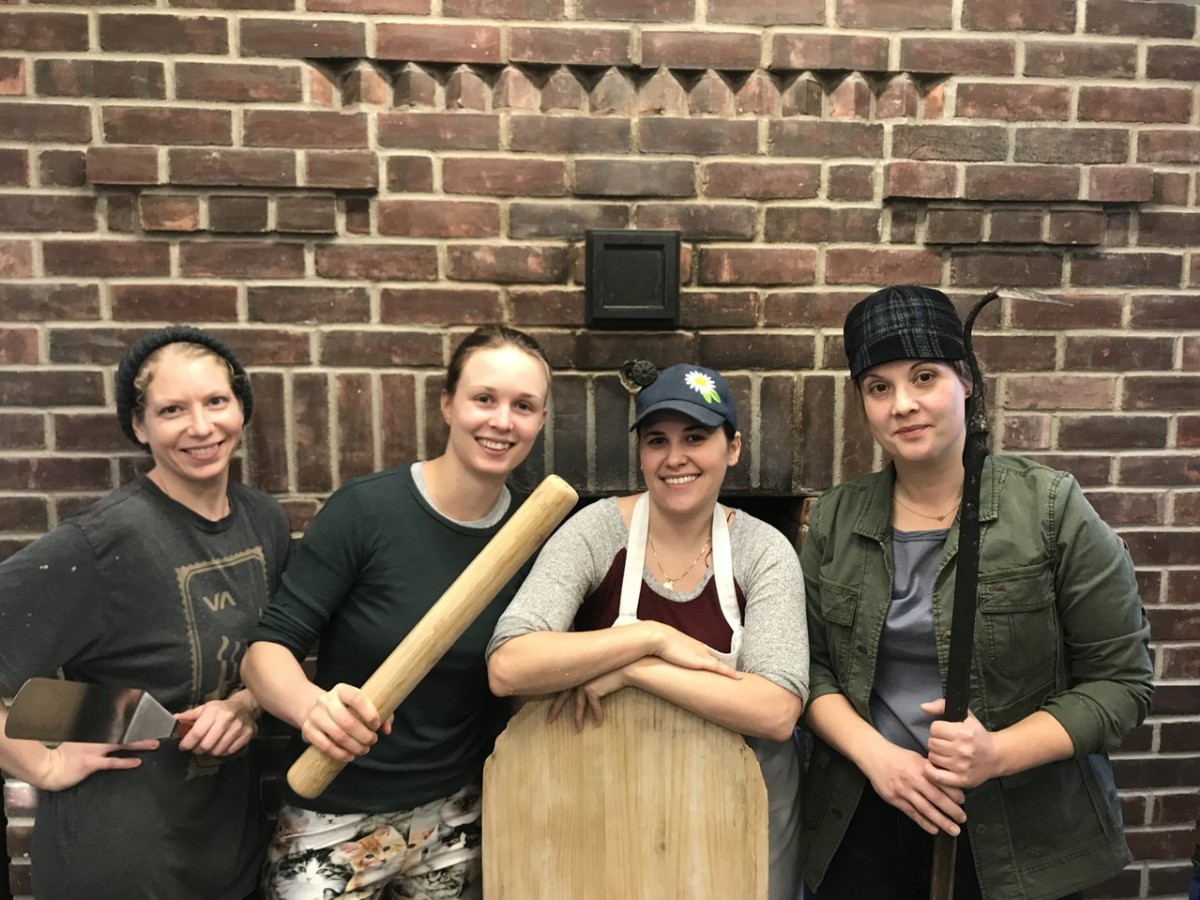 The Pennyloaf Bakery: the science behind magical old school bread

An unintended opus on this Corydon bakery's breads and pastries

While everything at The Pennyloaf Bakery tastes like magic, we’ve confirmed that so much of its success is down to science – particularly when it comes to bread.

Their sourdough is so tangy, the dough having fermented for two days before being put in a 550-degree old school wood-fired oven. Loaves will bake in there for 15 to 20 minutes, hitting an internal temperature of 210 F, resulting in everything you look for in a loaf – a crisp, toasty flavoured exterior and a nearly gooey, chewy, air-bubble studded interior that has just a bit of acidity.

It’s just marvellous bread – well worth the $7 to $7.50 price tag – the end result of so much tweaking by owner/baker Suzanne Gessler, along with her all-female baking team which includes manager Sarah Morton, assistant manager Brittney Albanese (both from Manitoba), and Kira Steinhauer, who comes from Löhenberg, Germany.

Here’s why that bread, and Pennyloaf in general, is just so great when it comes to gluten.

For starters, that starter

Gessler created the starter seven years ago while in culinary school at Red River College. (If you are not into all things fermented, a sourdough starter is the often-fetishized culture that is the result of flour and warm water mingling with bacteria to create yeast). Its life is now, more often than not, literally in the hands of head baker Morton, who rejuvenates this living thing on a regular basis.

To ensure it stays at its tangy best, they keep a highly detailed starter/bread performance log, which details what it eats (flour and water – usually twice a day); what its temperature is before and after eating; it’s texture (including notes like: “Ex: bubbly (large or small bubbles), stiff dry spots”); the water temperature; who it was fed by; the temperature of starter after four hours; when it’s snack time was, etc., along with all these auxiliary notes. Essentially, they keep more tabs on this starter than some parents do on their children.

“It’s now like a science manual…. I keep thinking that someone at a research facility should take this,” said Gessler in earnest.

“I’ve called up the university’s agricultural department to see if anyone is studying sourdough, because we have this goldmine of info of what are all the things that make good bread.”

(Note: No one bit at the university, so if you are scientist studying bread give Gessler a shout and she’ll hook you up. Seriously).

The reason we state that starters are often fetishized, is because you hear so much about starters that are multigenerational, that have been living for over half a century (indeed, one Canadian woman in the Yukon maintains a 120-year-old one, which is commendable) and thus, must make the tastiest bread. Although Gessler appreciates a starter's history, she doesn’t quite subscribe to the idea that the older the starter is, the better the bread.

“I think [really old starters] are great for nostalgic reasons, but I think the science behind it is showing that that doesn’t actually matter so much,” said Gessler.

“This thing is already alive and is rejuvenating so much. For instance: your fingernails and hair aren’t the same as they always were. I think this thing [the starter] just keeps reproducing itself. So, the fact that it’s old is more sentimental… than something that lends it flavour. But maybe it does taste better because it was your great-grandmother’s, which is great,” Gessler conceded.

She also subscribes to the notion that what is on your hands – the natural microbes, bacteria, etc. – also comes into play when you are kneading a living product that will eventually become an amazing loaf of bread.

September will mark five years for The Pennyloaf Bakery.

After “trying to save the world, one policy decision at a time,” in her previous life as a social worker and city planner, Gessler decided she needed a change. So, she enrolled in the Culinary Arts program at the city’s Red River College, where the majority of the Pennyloaf kitchen also came from.

At school, Gessler noticed that everyone seemed to have their specialty, but that no one was really nailing perfect loaves of bread. On top of that, her husband Dr. Mike Sochocki, who moved to Winnipeg from Łódź, Poland, when he was 10, often complained to Gessler that he could never find great bread that wasn’t just rye or white sandwich bread, like he could when he’d go back to Eastern Europe.

These two factors, along with the wanton to be her own boss, led Gessler to make old school bread-making her specialty.

She admits that she was never a bread geek to begin with, but soon she was all-in, having started down the sourdough rabbit hole where people usually do – which is with Chad Robertson’s Tartine Bread (the bread bible).

“After that, I got like every sourdough bread book imaginable, and I started to take home the school’s starter to feed it over a long weekend,” said Gessler

After graduating, Gessler would spend some time in Northern California learning how to bake on a wood-fired oven with a master baker in Marine Country, along with some sessions in Riverton, Manitoba, where Dora and Cornelius Friesen of Integrity Foods own a bakery with a wood-fired oven made by the late, legendary, Australian mason Alan Scott.

After baking in an Alan Scott-built oven, Gessler was hooked. She then decided that her bakery would need a wood-fired oven like the ones Scott built, so she sought out his children, who still run Ovencrafters, the family business that designs and builds custom brick ovens.

Scott's descendants couldn’t do it for logistical reasons, so she then found another acclaimed masonry business out of Toronto called  Stovemaster Ltd., led by the Ukrainian, Alex Chernov. Along with his Russian co-worker, Igor Kuznetsov, Chernov ended up moving into Gessler and Sochocki’s house for three weeks while they built the oven in The Pennyloaf’s kitchen.

The oven is pretty massive; it holds up to 50 loaves while they had to reinforce the floor boards underneath the kitchen with steel posts to keep it level and to keep the floor from sagging. (Initially, Gessler did not own the building so it was made a stipulation that should she leave her lease, that she would be responsible for removing the oven, which would have been quite the task). While simple in design and function, the oven is tremendous at holding heat, with temperatures remaining just shy of 300 F two days since the last fire.

Why Pennyloaf’s pastries are the bomb

While Gessler can take credit for the bread, she attributes the quality of Pennyloaf’s incredibly buttery pastries to numerous factors, namely her employees, her close ties with the Red River culinary school, and the fact that they use top notch ingredients, both local and organic whenever possible.

“First and foremost when I came to Red River College I became friends with many of the instructors there, because I am old” Gessler jokes.

“So now I can call them and say, ‘send me your best student bakers’ and they send me their best bakers. So that’s one reason why I have good product here, because… simply have some of the best bakers.”

On top of that, there is no cutting corners in the Pennyloaf kitchen, both with ingredients and with process.

On the butter front, which you can sure taste in their pastries, they use local Notre Dame Creamery; for eggs they use Nature’s Farms (simply the best eggs ever); for flour, it’s all locally grown and freshly milled, either from Prairie Mills Ltd., in Elie, MB., or DeRuyck's Top of the Hill Farm from Treherne, MB.

Just try one of their croissants or morning buns and I guarantee you’ll taste the difference. The morning buns in particular, which are croissant dough turned into a roll that is sprinkled with cinnamon-sugar, are nearly moan-inducing. I’m guilty of arriving at work after stopping in at the bakery covered in cinnamon sugar, having devoured a bun on the drive in. Even 20 minutes after eating it your mouth is still coated in sure buttery bliss, in the best way possible.

Outside of bread in the baking realm they only do five things: cookies, cakes, croissants, pastries, and scones, and they are all studies in buttery brilliance. (Their cookies have also brought me to produce sounds I try not to make in public).

To round out all their offerings, Pennyloaf also serves soups from Bernstein’s Deli and cheese from across the street via the Cheese Mongers.

Gessler’s mandate now for the shop is to evolve it to be even more environmentally friendly, hopefully cutting out the use of plastic bags, while narrowing down ingredients that are not sustainable to use in Winnipeg, like almonds and avocados.

They’ve also purchased a van that they will start to use like a food truck this summer, in that they will pull up to locations and sell the bread directly for an hour or two.

Gessler’s husband Mike and her father-in-law have also built a patio out back, and come summer they plan to host a little French-style market on Fridays, where you can pick up breads, cheeses, vegetables and fruits and other seasonal items.

The whole scenario is pretty damn charming, which Gessler -- who, outside of morning buns, isn't one to sugar-coat -- acknowledges.

"I love coming to work. I love when I can ride my bike and it’s 6 a.m. and there’s birds chirping and I’m riding up to this idyllic little bakery and I just think, ‘what the hell, this isn’t so bad.’”