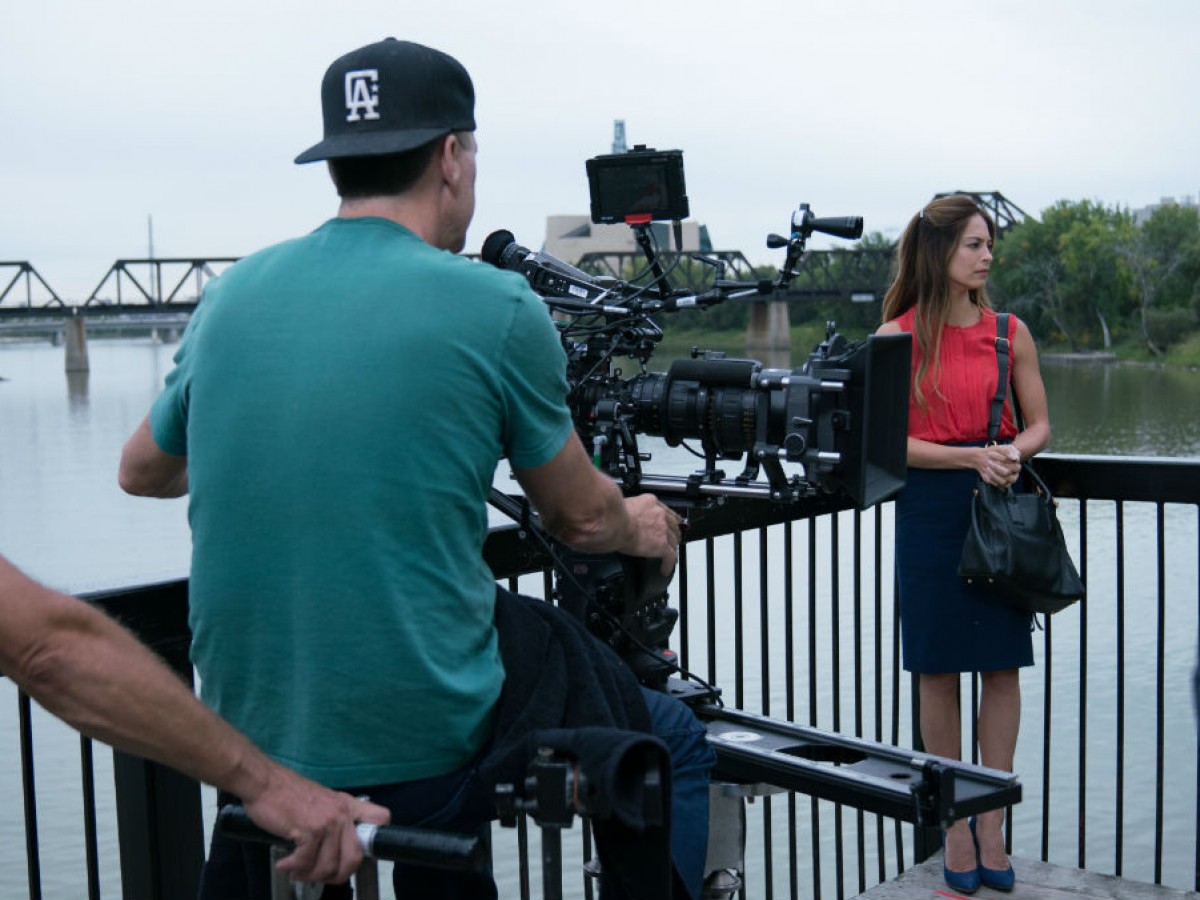 Behind-the-scenes on location in Winnipeg of Burden of Truth Season 2 with Kristin Kreuk ('Joanna Chang') on the pedestrian walkway near CIBO Waterfront Café. (Shauna Townley)

Burden of Truth’s creative team on their favourite Winnipeg eateries

The second season of CBC Television’s hit drama Burden of Truth launched this month, and Winnipeg is one of its biggest stars.

Set in both the fictional town of Millwood (which is shot in Selkirk, Manitoba) as well as Winnipeg, the show takes viewers through so many places in the city – including several of its restaurants, like SMITH, which features prominently in episode one, as actress Star Slade’s character Luna Spence works there.

Filming took place over the course of last summer, meaning the film and creative crew had plenty of time to get to know the city’s culinary scene – something they truly relished.

In the words of Burden of Truth creator/co-executive producer/writer Bradly Simpson, “it was a surprise to me that the food here was so good, and that it is such a huge part of the culture – it’s such a restaurant city. I didn’t expect that we would eat so well.”

On that note we caught up with Simpson, along with co-producer/second unit director Tyson Caron and writer Eric Putzer to find out what their top culinary picks* are in The Peg.

“Sous Sol feels like New York’s best kept secret. You walk through this alley then see a sign that reads ‘Vandelay Industries’ – from Seinfeld – on the door, and you walk in and it is like this magical kingdom for people who know about it.

There’s this exclusivity – there’s just the few hours that it is open, there’s no phone so you can only email reservations – all these sorts of things that just bring up the experience. Not to mention the food is fantastic. The last time we were there our server wrote down the music playlists, which we all took home. It really is just the whole package, plus there’s that table with all the candles that are melting all over a typewriter of all things.

We’d gone there a bunch of times during season one, then we heard the rumours that they might be changing the concept or closing it, and that became a huge regret [that it would soon be gone]. But when we got back here to shoot season two we found out it was still open and it was – and I’m not exaggerating when I say this – one of the happiest days of last year.” – Eric Putzer

“During the first season we went there for a cocktail and I looked around and couldn’t believe I hadn’t been there yet – like how did it take until episode seven or eight to make it here?

I think as writers you crave something authentic; you are looking for the truth, for something that feels timeless. And to me, walking in was like that tracking shot that opens Goodfellas – and that’s one of my favourite shots of all time – and [entering Rae & Jerry’s] was like walking into that.” – Bradly Simpson

The hippest haunt in town #raeandjerrys — thanks for the @eddie_and_inas_vintage

“Yeah, we talk about it often, [Rae & Jerry’s] is like walking into a scene. There’s just this ambiance and tone that you wish you could capture on camera and they just seem to do it effortlessly. It’s like, you walk in and take it all in and then next thing you know you are ordering a gin martini – it’s just that kind of vibe.

As well, as a writer I really appreciate that they give away pens… and they are solid pens” – Eric Putzer

“What I also love about it is it is very accessible. There are people in business suits and there also people in snowmobile suits, and it’s just amazing, everyone seems to be welcomed there. It’s a welcoming place but it also has this culture that you’ve really hit on as soon as you walk in.” – Tyson Caron

“This place looks like it hasn’t changed since the early 1900s, and when you walk in you know you are going to have one of the best, albeit expensive, classic steakhouse experiences. That back patio is pretty sweet, and at lunch you can get a burger and pint for only like $20 or something – that’s incredible.” – Eric Putzer

“We shoot on Wellington Crescent often, and when you do, you kind of have to go to 529 Wellington for lunch – it would be wrong of us not to.” -Tyson Caron

“We were big into the Goldeyes, so the Fort Garry Brewery having their own Goldeyes beer – The Angry Fish Pilsner – was a love at first sight interaction with the Goldeyes.

Half Pints is also my favourite in Winnipeg. They have a good selection with all their beers… the different things that they had, like half sours and triples and quads, and these really specific specialty beers that you don’t see a lot of breweries in Canada making and that was pretty amazing.” – Eric Putzer

“There’s a lot of beautiful restaurants in the city but Chew in particular was always accommodating and wonderful. It’s high-end food but in a smaller, I guess we’d say more out of the way environment, in that instead of interacting with a horde of people we felt you were able to escape a little bit.

Wild boar, chermoula, carrots and herbs... from our new winter menu (‘Cause baby it’s cold outside ) . . . Chew restaurant is closed today because our entire staff is cooking and serving a fundraising dinner for @candacehousewpg (because our staff is the best!). @candacehousewpg could use your support too, please take a look at their page and give a follow! . . . #wintermenu #wildboar #localeats #prairieeats #eatlocal #loveyourfarmer #wpgeats #havefoodwilltravel #chewcatering #chewwinnipeg #modernmomandpop

Their bakery next door [The Store Next Door] served for catering a lot of people on set who were out-of-towners. They have these great prepared meals, so instead of wrapping up and having to go out to eat after a long day’s shoot they could just pick this stuff up and throw it in the oven and cook themselves a nice meal.

And [in unison with Tyson] their crab cakes are amazing, and the homemade Oreo Cookies are to die for.” – Eric Putzer.

“I’ve always been a fan of hamburgers and when we moved here for season one I was introduced to the [Fat Boy**] rivalries, so I made it a mission during season one to try them all… And VJ’s just had this magic thing – like I think they still fry their fries in beef tallow – and it’s just these things that elevated it beyond what I was expecting.” – Eric Putzer

Season 2 of Burden of Truth airs on Wednesdays at 8:00 p.m., with eight episodes scheduled. Both seasons can be viewed online with CBC’s streaming app.

*This interview has been edited for length and formatting purposes, while we should also note the guys had rave reviews too for Segovia, Clementine, The Merchant Kitchen and Passero, which we simply didn’t have room to fit in the article.

**A Fat Boy is the style of burger that Winnipeg is known for. It utilizes chili sauce, shredded lettuce, pickle spears, mayo and more on a thin, flat-top cooked patty.