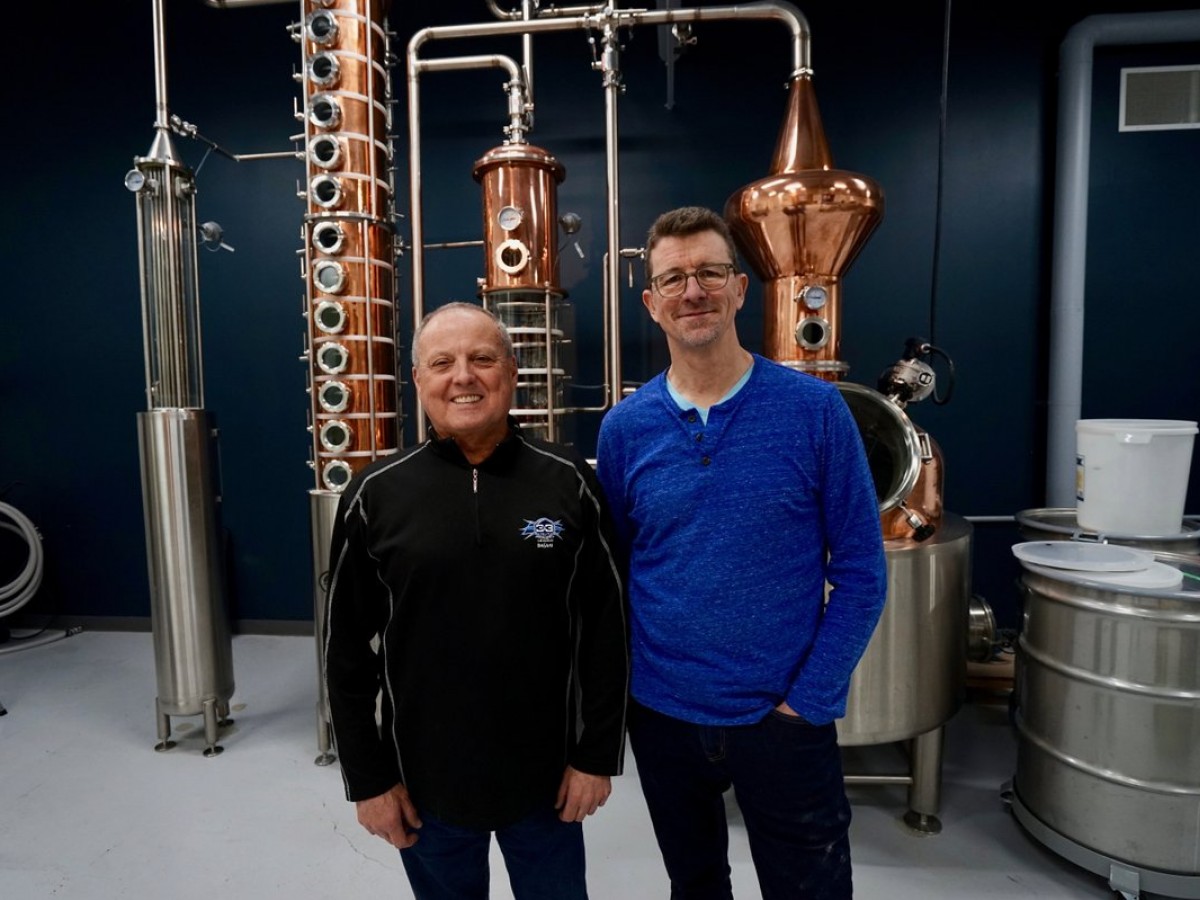 What’s new on the Winnipeg restaurant scene for winter 2019

We hope your New Year’s resolutions included frequent fits of fried fowl, bushels of bao, new locations from local favourites and a brand-new distillery – because that’s what’s in store for us this winter (along with all manner of alliteration).

So without further ado, let’s jump right into just a few things that have opened, or are about to open, for all you food enthusiasts* for 2019.

In just over one month we’ll be able to sip brand new locally distilled spirits from  Patent 5 Distillery, located right in the heart of the Exchange at 108 Alexander Avenue. Owner Brock Coutts, who is an accountant, along with his business partners Mike McCallum and Mike Borgford, have done some incredible work with the space, which brings you right back to 1908.

All the oak in the room was reclaimed from the St. Regis Hotel (having been meticulously extracted), including a beautiful stained-glass door that leads to the distilling room, along with the backbar, which runs the length of the room. They’ve filled the space with antique chairs and four top tables (it is licensed for 35 patrons), while they’ll be opening with their own Patent 5 vodka and gin – the latter of which utilizes vapour infused botanicals (as opposed to steeping), which makes for a superior gin.

They plan to be open by mid-February, with a cocktail program created by Brendan O’Shaughnessy (whose background includes Shed 5 in Wellington, NZ, and Cuchillo in Vancouver, to name but a few) utilizing bitters made from local Manitoba products like sour cherries and rhubarb, which Coutts’ wife Dinah Santos has created. They will also be doing a whisky in the future (they are distilling it currently; it just needs to be barreled and aged), while you’ll be able to buy their vodka and gin soon at Manitoba Liquor Marts.

The distillery is green – the only water being wasted is for cleaning, the rest is repurposed for distilling, while the heating used in the distilling process will be recaptured to heat the room. Even the leftover mash from the distilling process (they are using Manitoban stone-grounded wheat and some barley) is being picked up by a hog farmer to feed his pigs.

Anyway, they have so many cool things going on here that we’ll have a feature-length story on Patent 5 to help celebrate their grand opening come February.

On and around Sherbrook Street

Sherbrook Street Delicatessen (102 Sherbrook Street) fans will not have to mourn its loss for long. Having closed its doors on September 29, 2018, regulars quickly bemoaned how they would no longer be able to get that super tender smoked meat. Fast forward to the present, owner Noel Bernier (whose restaurant empire includes the Salisbury House franchise) has decided to re-open it with a tighter menu, which still includes the Winnipeg smoked meat and other favourites like the pickled beef tongue, those excellent chips and dip, and a new vegan sandwich. The deli will now be run by Bernier’s son Riley, along with his partner Juliana Roberta.

We are excited to announce that 2019 will be bringing us a new home! It is a bittersweet feeling to leave a space that we, and more importantly all of you, have put so much love into. It is and will forever be our sweet Khao House Over the past 2+ years we have made Khao House a home, and we are truly grateful to believe we will build that again, together. We will be moving into our new space @thegoodwill full time in the new year, and we couldn't be more excited for the opportunity to grow and evolve, and meet more of you beautiful people. Our last day at the house will be New Year's Eve (details asap) We would love to see you all this month to love and appreciate this old house, and to appreciate all of you who made it something we will cherish forever. We cannot wait to see the possibilities this new adventure will bring! ***Please note we will be closed Sundays and Mondays @khaohouserestaurant for the remainder of the year to give ourselves some extra time to move NYE DETAILS COMING SOON.

Just up the street from the deli was where Khao House – that lovely little Asian comfort food restaurant run by the equally lovely chef couple of Randy Khounnoraj and Korene McCaig – used to be. The last service in their original house was on New Year’s Eve, while as of January 2 they’ve made a permeant move within the Good Will Social Club (625 Portage Avenue; essentially just up the street from their old location). It’s a great choice, as there is now more space to savour their kalapao (steamed buns) and shoyu and spicy miso ramens (open Monday to Friday, 11 a.m. - 9:30 p.m.; 3 p.m. - 9:30 p.m. on Saturdays), which you can wash down with a fine selection of Asian beers.

Another new culinary addition to Sherbrook Street is Magic Bird, a new fried chicken concept found within the Handsome Daughter (61 Sherbrook Street). Since November they have been serving up all manner of bird, including straightforward country style and spicy Nashville-style (all using dark meat), along with chicken strips and lavishly sauced weekly feature fried chicken sandwiches that are really quite glorious. (Our staff pick thus far is the honey butter fried chicken, which you should get with curly fries for that added nostalgia). You can read the full three-and-a-half star review here from Winnipeg Free Press reviewer Alison Gilmore.

Last call for The Reubenator! New sandwich feature is dropping soon. The Classic and The Cheese Wizard always available, come by tonight and tell us which 'wiches you want!

More details  can be found here.

Chef Ed Lam and the crew from Yujiro (1822 Grant Avenue), arguably Winnipeg’s best Japanese restaurant, added a second restaurant to their roster in late 2018. Gaijin Izakaya (Units 2 - 1575 Regent Avenue) just opened on December 13 and already the place has been receiving rave reviews for chef Lam’s take on izakaya staples (Japanese small plates meant to accompany drinking). Like Yujiro’s lunch menu, there are plenty of ramen options – only here ramen is served all-day (and you can even get it as takeout) – while the menu is studded with yakitori, sashimi and robatayaki-style dishes. There are also some pretty out-there fusion dishes, like spicy beef tartare served with crostini dressed with miso garlic butter, and the Gaijin nachos, which features miso salsa, spicy beef, mozzarella cheese, nori, basil, and spicy sauce. Pretty much everything chef Lam does is money, and Gaijin (which is slang for foreigner in Japanese, which Lam, being a guy from China who specializes in Japanese cooking, is) is no exception.

More amazing pics from @thetastytidbits! And here's the review: ・・・ Your New Favourite Spot You need to check out @gaijinizakaya on Regent! This place is incredible! I recently went in on Saturday night with @vilaifortunecookie to check things out. The minute you walk on you are welcomed by the warm and outgoing staff! They welcome you by yelling “welcome” in Japanese across the restaurant. You instantly feel excited to be there. The restaurant is a gorgeous open concept with communal style tables in the middle, encouraging you to engage with others. The restaurant is a Japanese style sake bar with upbeat music and incredible share plates. This is the kind of place you should go with friends and expect to stay awhile! . . The food is @ecklam‘s take on Japanese tapas plates. Serving up small delicious share plates. Go with a group and order a few different things to try. That’s the best way to do it!! Also serving up ALL DAY RAMEN & take out Ramen!! . . . Serving up a variety of sake, cocktails and Japanese beers. P.s they have 2L Asahi beer canisters!!!! . . My favourites were Satay Beef Eggplant Kimchi Ramen

Another Winnipeg staple that has expanded operations is  Dancing Noodle, which now has a second location at 7-741 St. Mary Road. Here, chef/owner/noodle-puller extraordinaire Xiaofei Zuo has added a few sushi rolls and baos to the menu, while you can still get his most-excellent hand-pulled noodles (available from angel hair thin to flat and thick) in his rave-worthy Lanzhou beef noodle soup. Zuo, who is from Tianjin, China, is a real student of the game (after culinary school in Winnipeg he moved to Lanzhou to learn his noodle-making craft), so rest assured that his pork baozi at this new location will be legit.

visit our second location and try those delicious Chinese “baozi” out, big order mentioned ahead please:)

*Our New Year’s resolution is to never use the word “foodie” again. As well, while we are at it, “appies” really needs to go too.