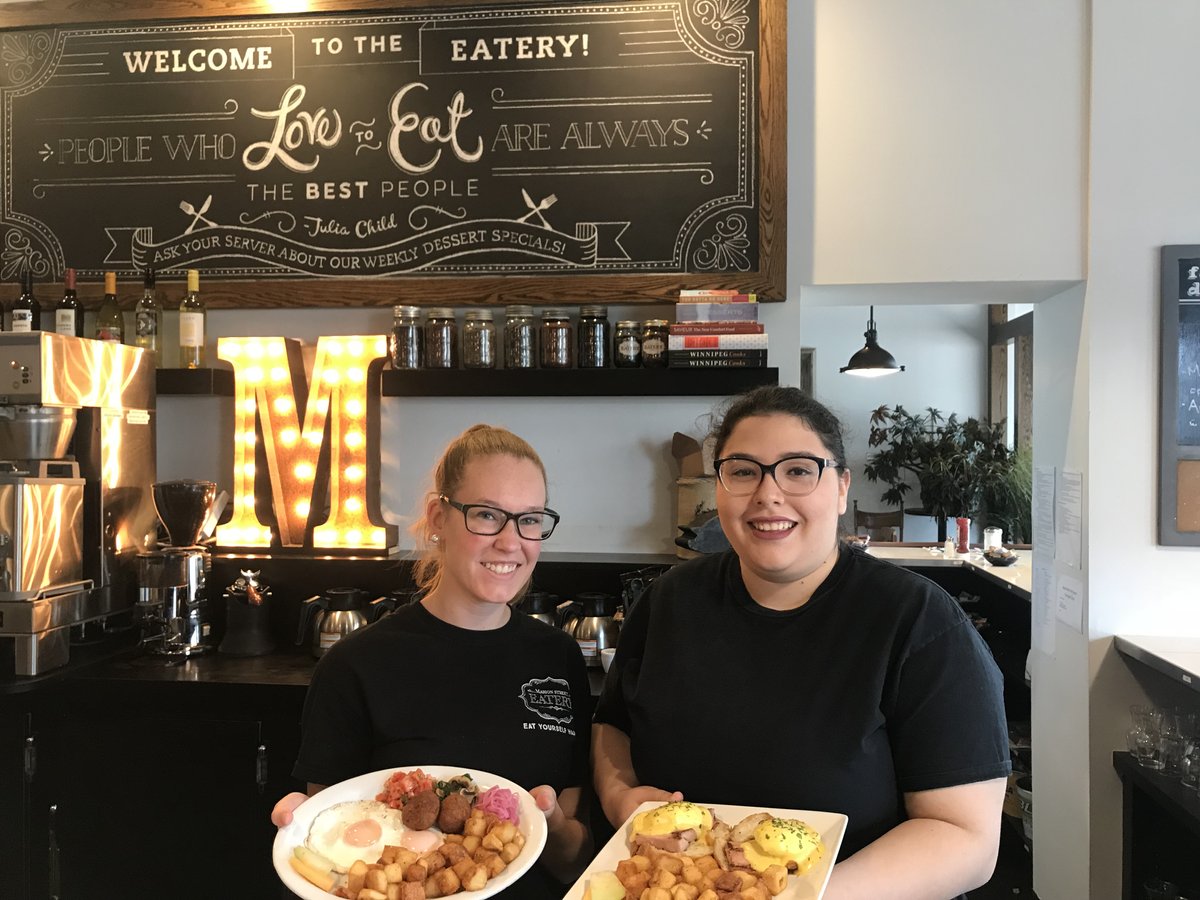 If there was a comfort food championship, Marion Street Eatery would take the title. In fact, they’ve taken many a title since the restaurant first opened in February 2014.

Within their trophy case you’ll find three Poutine Cups (People’s Choice 2014; both People and Judge’s Choice for 2015) along with the 2015 le Rendez-vous des chefs (pea soup contest) trophy from Festival du Voyageur. The restaurant has also been featured on Food Network’s You Gotta Eat Here!, while Air Canada’s enRoute magazine listed it in the 2015 article, “Top 7 New Restaurants in Winnipeg.” It’s also the number five ranked Winnipeg restaurant on TripAdvisor.

Their mac & cheese, with its bacon and old cheddar béchamel is the bomb (and don’t even get us started on that crunchy crushed pretzel topping), while the restaurant is known for weekend brunch lineups along with regularly serving over a thousand burgers during Le Burger Week.

Happy Mother’s Day!!! Big #shoutout to two of our favourite moms Chef Melissa and Laneil! Without these hard working moms the Eatery wouldn’t be what it is today! Speaking of today, we have amazing #breakfast and drink specials on! Open till 2pm! Reminder it’s breakfast only and we don’t take reservations. #mothersday #workingmom #specialday #marionstreeteatery

On top of this, the restaurant is a female-driven force – originally under the co-owners/dynamic duo of Laneil Smith and chef Melissa Hyrb – and now under chef Camila Gamboa and manger Hayley McMurray.

“Laneil and Melissa are both really big on wanting to push people and help people grow – and that’s what they did with me,” said McMurray, who has been managing the front of house since 2016.

McMurray’s background includes a diploma from Red River College in hotel and resort management, followed by working for Disney for a year, and then a brief stint at the Fairmont Winnipeg before taking over at the Marion.

“This is my first management position and I’ve gotten so much from it... and it turns out I love being in the restaurant in a smaller setting,” said McMurray.

“Plus, I always thought this place was great because it was run by two women in the industry, while it’s just way more of a family atmosphere. I love all the relationships you get to develop with your staff and customers – you just feel like more of a part of the community.”

After three-plus years of non-stop work, both Hyrb and Smith have become mothers in the past three years, making the idea of being in the restaurant every day a challenge.

On top of that, this past July chef Hyrb pursued one of her career goals in becoming a culinary instructor at Red River College, while Smith has been transitioning to running the restaurant – and the adjacent Marion Street Hotel – from more of an office role.

All of this had them considering the restaurant's future, which thankfully they did not have to do for long, as this past summer the whisk (literally, check out the image below) was passed on to Gamboa.

The day has come, it’s a proud and bitter sweet moment for Chef Melissa as she passes down the tattered recipe book to Chef Camila. Melissa knows that all your favourites are being put into safe hands. The Eatery is sad to be saying goodbye Chef Melissa. Words can’t express the gratitude of what she’s made possible for a lot of us. We’re wishing her the best of luck in her new career as a Culinary Arts Instructor @redrivercollege ! We also are so excited to have Camila step into this new role! We know she has the passion, brains, and strength to lead our team in the right direction so we can continue to give you those beloved home-cooked meals! #passingthetorch #byefornow #newleader #changeisgood #thetimehascome #marionstreeteatery

Having started in the Marion in 2015 as a co-op student, Gamboa worked her way up to sous chef during Hyrb’s maternity leave. During this time, she also completed the Culinary Arts diploma from Red River College, but last year left the restaurant for a great gig with VIA Rail.

When Hyrb called her up to say she was leaving and that the restaurant’s future was in limbo, Gamboa was in a good place cooking on the trains, and at first did not seriously consider applying for the new head chef role.

“I was ready to say no because I had a lot going on,” said Gamboa. “But then I realized I loved this place and I still wanted it to be open and I started thinking about the staff and the friendships I’ve made here and just the food and the quality, and I started thinking, ‘there’s not a lot of other restaurants like this.’”

“And this [taking over the kitchen] was a great decision; I love it here, and now there’s motivation to keep learning, to keep trying new things and to move the restaurant further,” continued Gamboa.

Who says you can’t have ice cream for breakfast or too much pumpkin?!? We’re offering today only... cranberry rum waffle with apple compote and pumpkin caramel ice cream duo #marionstreeteatery #breakfastspecial #pumpkinspice

The only change during this past summer’s transition is that they’ve dropped dinner service, while breakfast/brunch service has been expanded to seven days a week.

On the menu you can still get the classics, like the aforementioned mac n’ cheese, the apple whiskey pancakes (because it’s always better with whiskey caramel sauce) all the killer burgers and hearty breakfast dishes.

On top of that, Gamboa and her kitchen crew have also been serving specials that celebrate the ethnically diverse kitchen. This started to rave reviews this summer during Folklorama, with dishes representing the Philippines, Poland, Vietnam, India, China (along with a Halifax donair to boot), while Gamboa has made chicharron-stuffed pupusas, along with her mother’s recipe for curtido from her native El Salvador.

EL SALVADOR that’s right we’ve got #pupusas for today only!! They’re gluten free as they’re made from corn flour and stuffed with chicharrón and a blend of 3 cheeses!! #chefknowsbest #marionstreateatery . . . We thank you for your support and for stopping by for the last 2 weeks to try our #dailyspecials !! We had fun researching our culture in depth and we hope you enjoyed our trip around the world!!

Because when you think of it, comfort food is comfort food, no matter what the country of origin.

But you don’t need to take it from us that you can still expect the best from Marion Street Eatery, that’s what we have regulars like Darlene and Doug McPherson, who come in almost every Thursday, for.

“When I come here the waitresses know you by name, they welcome you in, and they seem to do that with all their customers,” said Darlene.

“To me, this place means small town Manitoba, and I love it because of that – and besides, the food is excellent.”

Meet our Thursday regulars! Doug and Darlene come in for breakfast every week. They are greeted by our beautiful servers who are expecting them. When they are unable to come, they call so we don’t worry. What amazing regulars we have!! P.S. You may recognize Darlene from our episode of #youvegottaeathere #marionstreeteatery #customerappreciation #wonderfulpeople