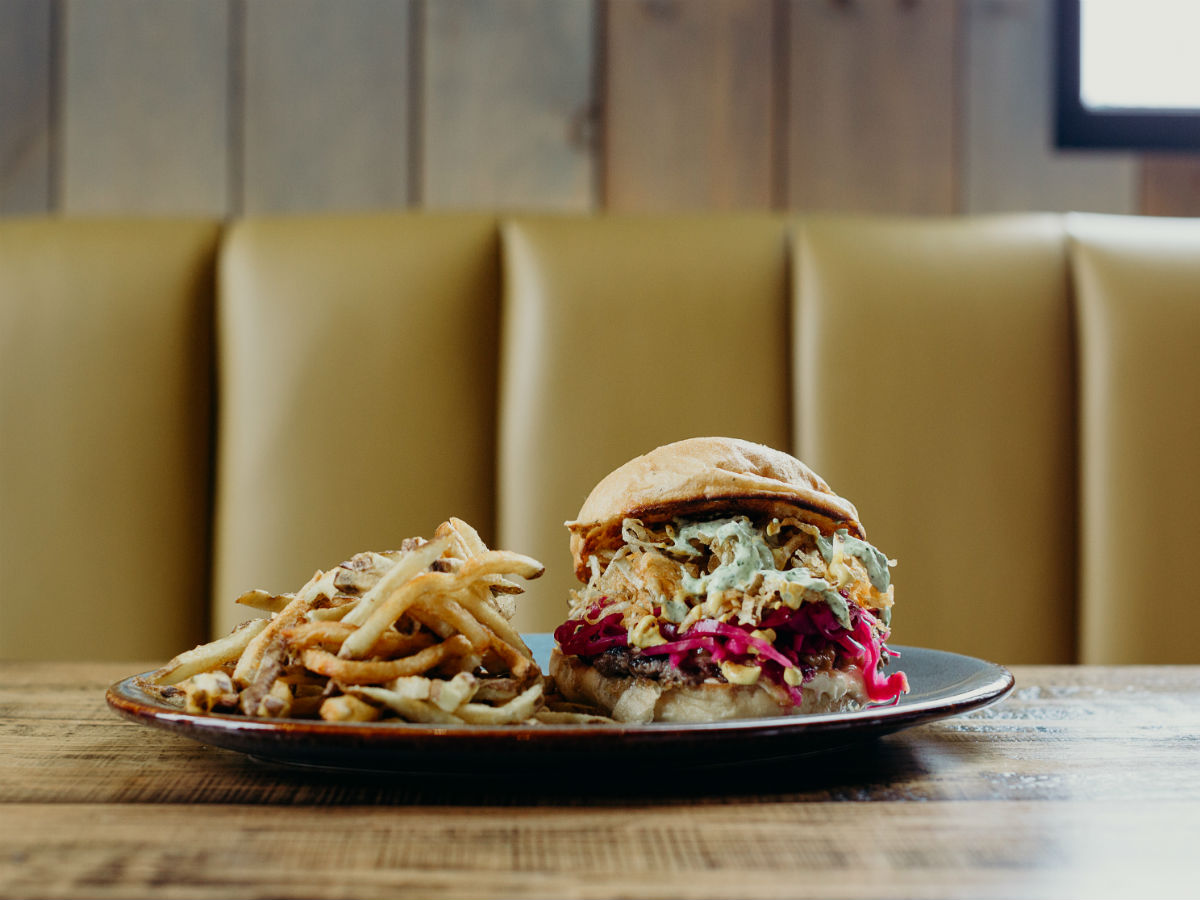 Brazen Hall will be looking to repeat as People's Choice champions during this year's Le Burger Week with this, The Krakow Burger (Charcoal Collaborative)

Burger is the case that they gave me

Le Burger Week in Winnipeg is back!

This cross-Canada and international event – participating cities now include Calgary, Cornwall, Edmonton, Kenora, Montreal, Ottawa, Regina, Saskatoon, Toronto and Vancouver, along with Haitian cities Port-au-Prince and Cap-Haïtien – serves as a showcase for local chefs to go as big and brash as they can while putting many delicious ingredients between a bun (and note: it’s not just beef. Each year there are plenty of vegetarian options while you’ll also find all manner of proteins being used).

From September 1 to 7, you can indulge at over 115 Winnipeg restaurants – the highest number in any participating city – who are competing for the People’s Choice, Healthiest, Most Creative, and Judge’s Choice titles, with voting taking place on the official Le Burger Week website. 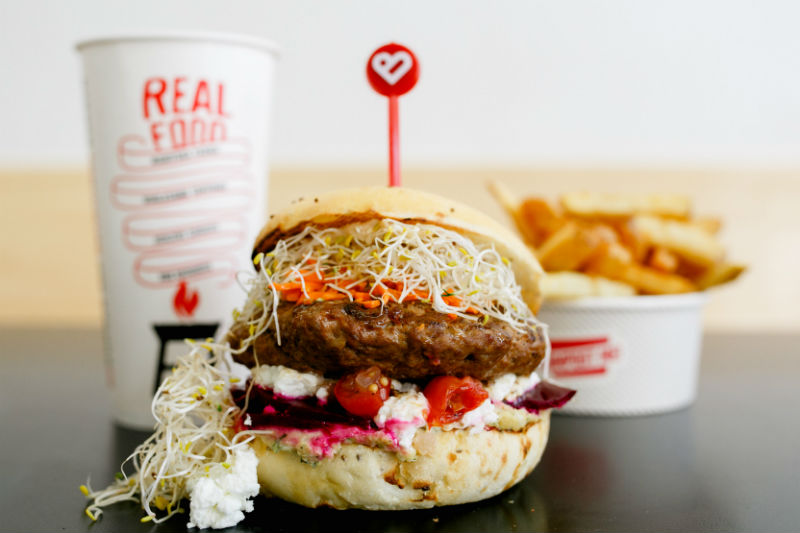 Nuburger have won People's choice four times and will this year be presenting this, the Burgers, Beets, Battlestar Galactica at their Stradbrook location (Charcoal Collaborative)

“Le Burger Week Winnipeg continues to grow year over year and it’s all to do with the passion that both Winnipeg chefs and Winnipeg eaters bring to the event,” said Daniel Gurevich, Winnipeg’s Burger Week ambassador who coordinates the event as part of the Charcoal Collaborative team.

“Every year we see new restaurants participating from all corners of the city and we couldn’t be happier. The goal has always been to grow the event and make it more accessible so everyone can enjoy and we personally felt we have done just that,” Gurevich continued.

Winnipeg has been participating in Le Burger Week since 2013, with Nuburger having reigned supreme as People’s Choice champs from 2013 to 2016. Last year, Brazen Hall Kitchen and Brewery finally took away their title with the Farmer Jon, a beef and Winkler Farmer Sausage patty with bacon, whisky mushrooms, stout onions, Manitoba Trappist Cheese, blueberry maple ketchup and house mustard on a potato bun.

Other winners from last year were deer + almond, who won Most Creative with the Let Us Taco Bout Burgers Next Week, The Roost, who took the Healthiest title with The Littlefoot, and Sherbrook Street Delicatessen, who won Judge’s Choice with the Slick Rick.

Below, you’ll find just a few of our picks that could take the above titles this year, while you can also find a comprehensive list of all of this year’s Winnipeg participants here. 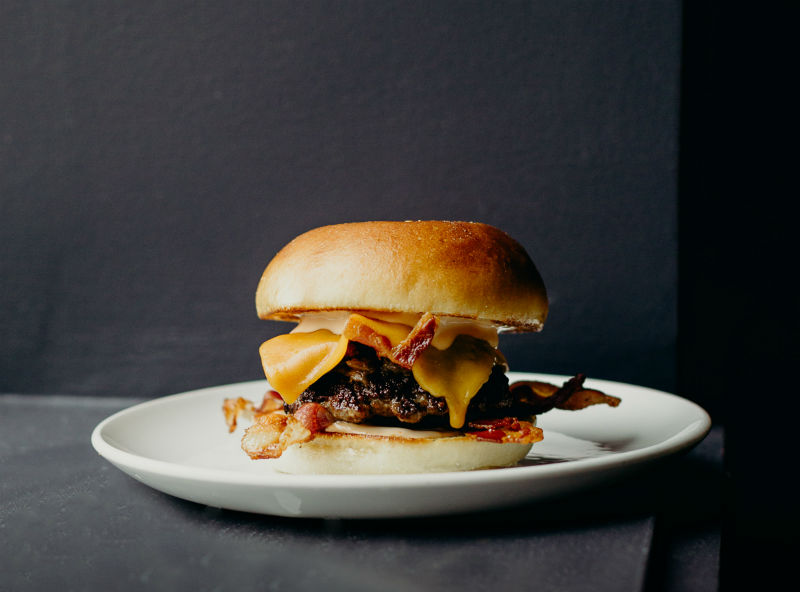 There’s something to be said about simplicity, as is the case with The Cornerstone’s entry for the past two years, The Ron Swanson.

Chef and Red River College culinary instructor Eric Lee had this to say about that burger, “the last life-changing thing I had in Winnipeg was the double Ron Swanson with cheese from the Cornerstone. Sometimes I feel like texting Norm [Pastorin, the chef at the Cornerstone] about it with “love=burger,” because I can’t stop thinking about it,” so that should be all the hype you need.

This year they’ve added bacon with Swanson’s Revenge, which has caramelized onions, cheddar, “fancy sauce,” and four slices of that aforementioned pork. The burger alone is a beauty, with a ground brisket and chuck patty and a house-made bun that is pillowy soft. Want more hype? Just check out  this tweet or this Trip Advisor review.

Clementine’s regular burger on the menu, the Burger Dip – with its incredibly tender patty, pickled onions, oxtail jus, and jalapeño and cheddar aioli is already one of our favourite all-time burgers, so their entry has us really excited. Their 2018 entry is the Herb & Marrow, featuring a beef and bacon patty, roasted bone marrow, parmesan and herb aioli, smoked mushroom relish, and herbs, all on a sesame milk bun. How luscious can you get? 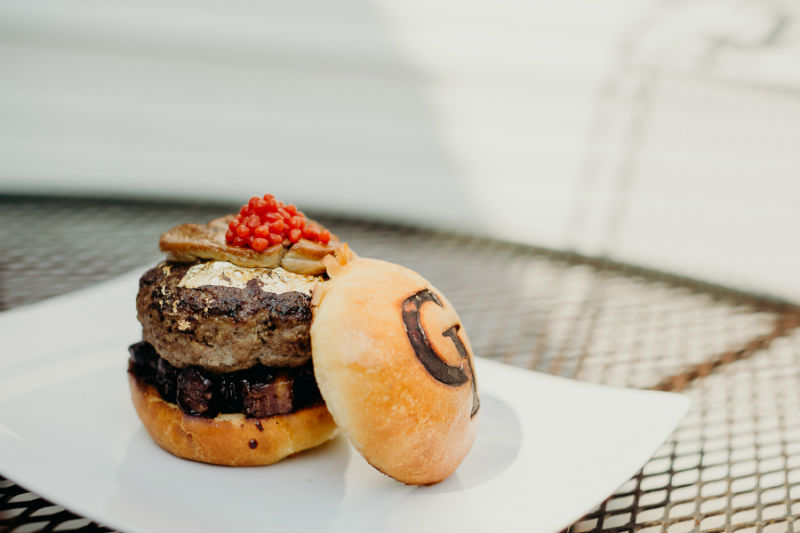 The Gates on Roblin (695 Roblin Boulevard)

The Gates is looking to blow the gates off both your tastebuds and bank account with this stunning $99 number called the G-Unit, which features an 8 oz Waygu patty stuffed with aged gouda, balsamic bacon chutney, tomato “caviar,” seared foie gras torchon and 24k gold leaf, all served on a house-made truffle infused brioche bun. Needless to say, it will be rich (while making you poorer).

Chew (532 Waterloo Street)
Lord love a charcoal bun, especially one brimming with a bulgogi BBQ sauced beef patty (because gochujang is our thang!), umami mayo, beet chips for texture, and kimchi apple slaw. Yes, we are certainly ready to crush “The Wesley Crusher.”

Kyu is always coming up with crazy and tasty stuff, so be sure to put their Lamburghini Mercy on your radar. With a lamb and AAA Angus beef patty, whipped cream cheese, fried jalapeño poppers, kale, Thai basil pesto and mint tzatziki on a pretzel bun, this burger promises plenty of balance with heat and plenty of creamy acidity, along with some added crunchiness. 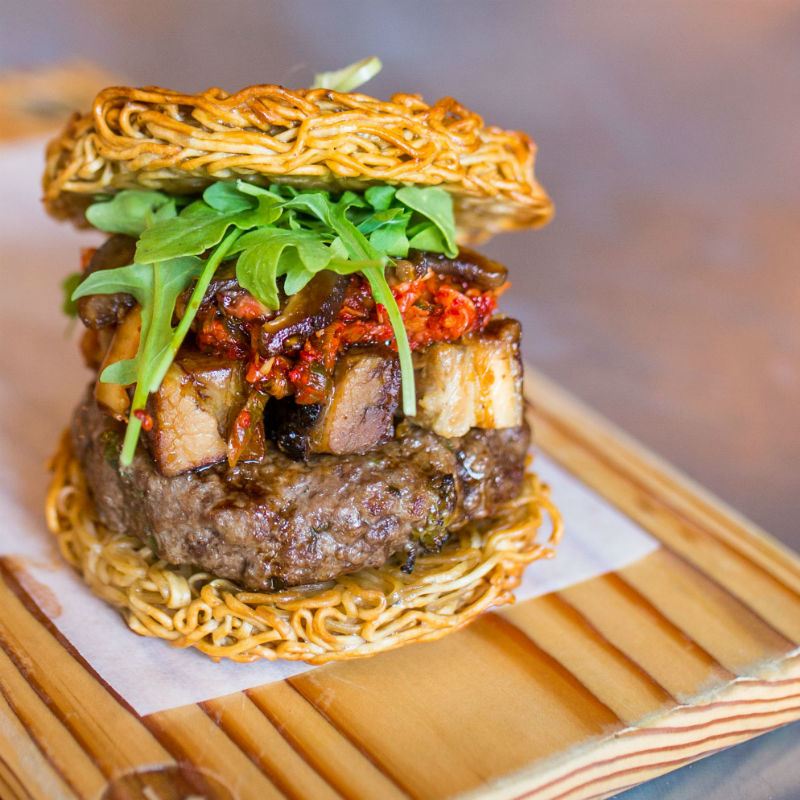 The Exchange District sandwich shop has already made some legendary burgers for Le Burger Week, including the Bronutyne burger (both the original and 2.0 versions), which featured a brisket and chuck patty in between two glazed doughnuts from their neighbours, Bronuts.  This year they are going with another elaborate wild card, with a burger that is being served on a ramen noodle bun. It’s called the Kimchi Ramen Burger, and it contains a soy-seasoned brisket and chuck patty, thick cuts of roasted Manitoba pork belly, house-make kimchi, soy-pickled shiitake mushrooms, arugula, and sweet soy drizzle.

While you don’t normally associate teppanyaki with burgers (although all the flattop space certainly could be utilized to do some serious grilling), Ichiban has us enticed with their entry, the Japanese Southern-Fried Soft Shell Crab Burger, which features all manner of umai, including unagi sauce and tobiko, along with sweet, acidic and textural elements like daikon, spicy mayo and sweet cucumbers. We should also note here that  KYU Bochi too is going with a soft shell crab burger, which they have hilariously named the Leonardo daPinchi.

We of course have to give a shout-out to Winnipeg’s original vegan burger establishment along with all you herbivores out there who want a piece of the Le Burger Week action. This year Boon is serving The Nasty Vegan Mushroom Melt, featuring a Boon patty, double “cheese,” sautéed mushrooms, crispy onions, pickles, sun dried tomato sour cream, and their signature Bermuda sauce. 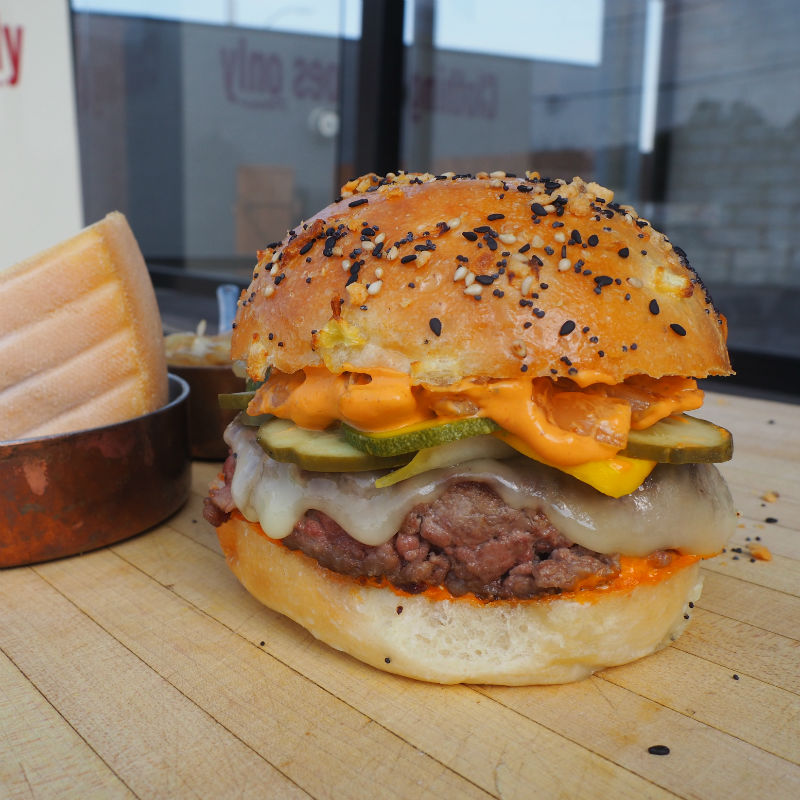 Before we get into the burger, we should note that Winnipeg’s favourite basement bistro/bar will now (as of September 1, the start of Le Burger Week) be open five days a week, Tuesday through Saturday from 5 p.m. until midnight.

Now that that’s settled, are you one of those people who is constantly watching those Raclette videos? You know, the ones where you see a big wheel of Raclette getting heated and all melty before being slathered off onto a plate of food? If that’s your jam you’ll find the Raclette About It to be a memorable experience. With an Angus beef and cremini mushroom patty, molten Raclette, “Secret Sous Sauce,” smoke and caramelized onion jam and local pickles on a brioche bun, this burger promises to melt with you (although we can’t promise it will stop the world too).