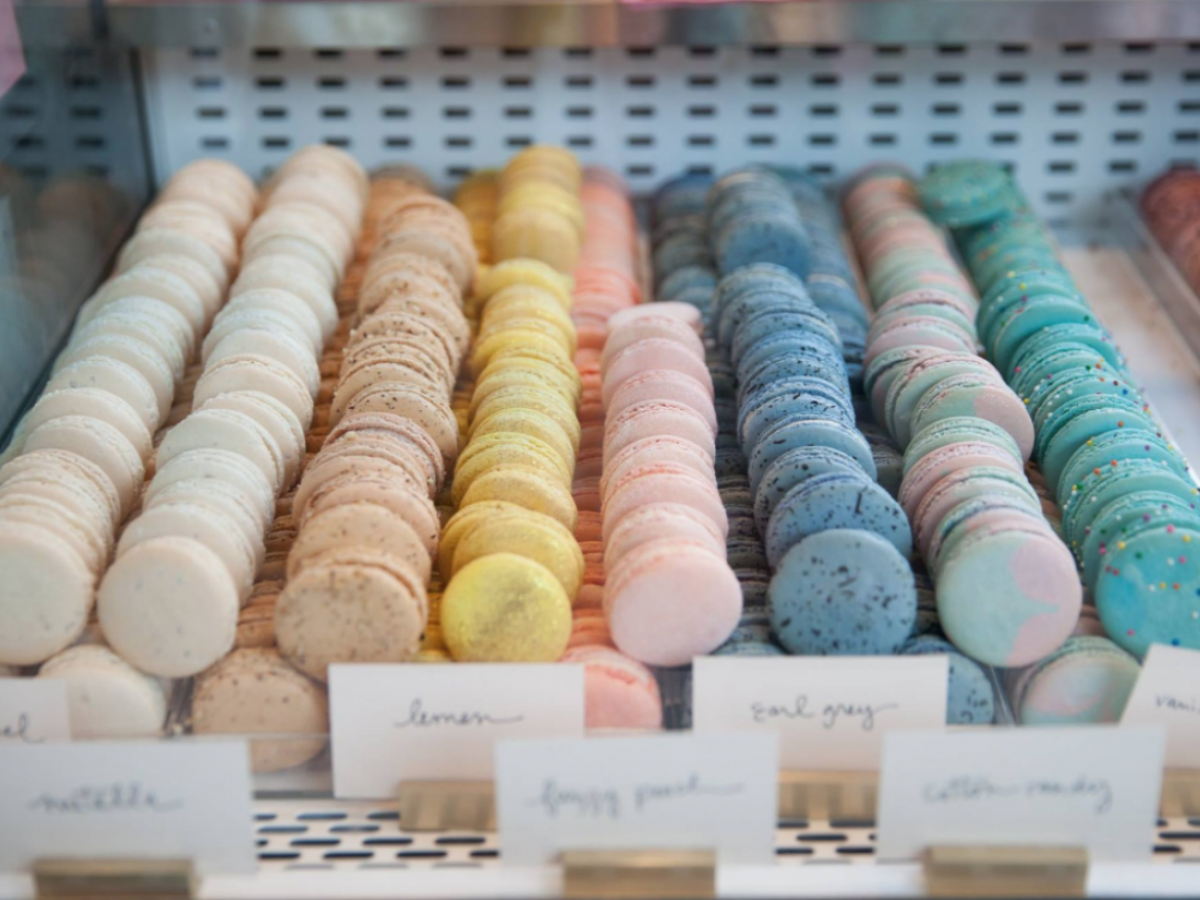 New and notable on Winnipeg's culinary scene for Summer 2018

Pop-ups, news about brews, an all vegan gluten free cafe and new rooms from some of our favs

What do beer, ramen, macarons, vegan cheeses, pho and gigantic iced-milk creations have in common? They are all on this list!

(And surely that must be it, because if anyone combines all these concepts into one dish we are not having any of it.)

Anyway, quite a few fun things have just popped up in the city, and there are some pretty tantalizing offerings on the horizon, so without further ado here's a little guide to what's new, notable, and coming soon to The Peg's culinary scene.

Jenna Rae Cakes at The Forks

If you’re on IG (that's what the kids call it, right?) there’s a good chance that the vibrant, sprinkle-coated treats of Jenna Rae Cakes have popped up on your feed. The owners, twin sister duo Jenna Rae and Ashley Nicole, have used their creative expertise and eye for design to develop a brand which is now admired globally. Now, their success has led them to their next big venture: opening a second storefront at the ever-charming and ever-evolving Forks Market. If you need to satisfy a sweet craving, they’ve got you covered, with a glass counter flaunting a wide range of tasty treats like macarons, cookie sandwiches, and cake gems.

You can find Jenna Rae Cakes on the second floor of the Forks Market, just outside the elevators.

Lots of reasons to visit @theforkswinnipeg this weekend! @thirdandbird is bringing even more talented vendors for their pop up weekend from Friday to Sunday on the second floor! And @kidsfest is a great family event to bring everyone along to See you this weekend! ⠀⠀⠀⠀⠀⠀⠀⠀⠀ #jennaraecakes #jrcattheforks #winnipegbakery #jrcmacarons #macaronstagram #macarons #eattherainbow

Chef/restauranteur Cho Venevongsa is like P Diddy in the late 90s (can't stop/won't stop). The chef behind the Wasabi and Chosabi restaurants in Winnipeg (there are three of each) has now opened (as of today) a new restaurant dedicated to ramen at 1151 Pembina Highway.

It is said to be Winnipeg's only restaurant solely dedicated to ramen, and he already has his eye on a few more locations for this concept. Like his Wasabis and Chosabis, you can expect fast service and a slick design.

Winnipeg, we’re ready for you! Here is what you need to know for our Soft Opening. We are located at Unit 2, 1151 Pembina Highway. It will be on Friday, June 8th at 11am. This will be a TICKETED event, only 200 tickets will be available. We will hand out tickets as the line grows. Only 200 BOWLS will be served on opening day, and service will end accordingly. There is ample parking behind the restaurant, access via Rockman Street. Feel free to take photos of your ramen with the hashtag #choichiramen! You might just see your post on our page. See you all on Friday!! We can’t wait.

Tom and Heather Hoang are opening up a second location of their acclaimed Vietnamese restaurant (the original is at 5-274 Sargent Avenue) right in the middle of downtown. Coming soon to 235 Portage Avenue – which was formerly Kim Long, a popular Chinese restaurant with the downtown business crowd – you can expect the same excellent pho dishes, along with vermicelli bowls topped with a fine selection of grilled meats (Hoang does great work when it comes to grilling proteins, particularly anything that is skewered on sugar cane). Needless to say this will be a welcome addition to the Portage and Main area of the city.

And on that note, and so fitting for the summer, is the Hoang’s other restaurant, Banh Mi Go (6-794 Sargent Avenue). The restaurant focuses on bánh mi and other Vietnamese street foods. One particular thing that you'll want to check out this summer is their rolled ice cream, which you can watch the cooks swiftly mix, smoothen, and roll out right in front of you. It’s pretty sweet, literally.

Happy Mother’s Day! Take your mother out to a fine meal at Pho Hoang. :@vilaifoodstudio⠀ #phohoang

From Allan Pineda – the same guy who puts on Baon Manila Nights – comes a new pop-up dinner concept that will take place most Sundays throughout summer at Infernos on Academy.

HaCHere (pronounced “hatchery”) is a collaboration between local caterers and chefs, who will come together to host multi-course dinners, each with quirky, exciting themes and unique menus. The chefs are also adaptable to dietary restrictions, so there will be something for everyone. Businesses/chefs/caterers participating include Roughage Eatery, Purple Hibiscus, Loaf and Honey, Atomic Dinner Rolls, and Prairie Kitchen Catering.

Tickets are $60-$65 with gratuity included. You can find details of each dinner posted on HacHere’s facebook page.

Winnipeg has had its fair share of snowy days, but you’ve never experienced snow this good! Snow & Moon’s signature “snow” is made of piled milk flakes and comes in a variety of flavours, including tiramisu, strawberry, and matcha. They always do a fantastic job of decorating the snow with an assortment of toppings and making their desserts look Instagram-ready. For those craving something savoury, the café offers a pretty good panini stuffed with cheese and fresh veggies.

Snow & Moon is open is located at 5-1727 Kenaston Blvd (and admittedly, we are actually quite late to the table on this one, as Snow & Moon opened late last summer, but we had to put it on this list as these creations are something else).

Very excited about this 100 per cent plant based cafe that just opened in June on Corydon Avenue (1-709 Corydon Avenue). Circle Kitchen's whole menu is gluten-free, vegan and uses "no refined sugars or sketchy ingredients," (their words; and we love it), and goes above and beyond in that they make all their own yogurts, milks and cheeses using nuts (and for those of you who have not yet experience the joys of cashew cheese -- which is more like a spread -- you are in for a treat #sotangy #socreamy). The menu features numerous salad bowls, including a Caesar that incorporates cashew parmesan and coconut bacon, and fun toasts like the Lox toast, where instead of cured salmon you'll find carrots. There are also cold-pressed juices, treats, and some summer specialties coming soon like kombucha floats and ice cream sandwiches.

Tomorrow, 8-6! We’ll be here! We thought we’d need an extra day to work some things out - but Saturday was so fun we’re ready to do it again! Pop by for a latte - our coffee is fair trade + organic, roasted in Mitchell, MB by The Fluid Bean!

(A real home for) Nonsuch La Brasserie and Brewing Co.

After perfecting their craft making batches of beer at Barn Hammer (not to say Barn Hammer was not homey, we are pretty enamoured with that place), Nonsuch has made it official, taking over the former location of PEG Beer Co, at 125 Pacific Avenue. They currently brew a Saison – which has been getting great reviews and is meant to be cellared like wine – that you can also find at fine outlets and other breweries across the city, while they’ve also recently come out with an Old Ale X, which is a hefty number at 10 ABV. Since they started brewing a few years ago we give them big points for marketing too – particularly the nautical website and sexy black bottles, which look like a high-end cava. Their sweaters are super dope too.

Come by the @barnhammerbrewing taproom tonight from 4-11 to try our small batch of Baltic Porter for a limited time. Hope to see you there! @ptash.filmandphotography

Much like how Nonsuch got their start, this brewery within another brewery is looking to make it's mark on the Winnipeg beer scene. Their moto is “brewing it to 11,” which any Spinal Tap fan will appreciate, while they promise to start brewing “the coolest styles” utilizing “top-quality ingredients” and “the most innovative brewing techniques in the industry today.” Devil May Care is a partnership between two Winnipeg homebrewers – Colin Koop and Steve Gauthier –  who are currently collaborating and brewing within Stone Angel Brewing (1875 Pembina Hwy Unit 9) where you’ll be able to find their beers being served this month. You can expect hoppy IPAs, malty stouts, and various inventive sours, ales and such.

DMC is taking over 60 Glasses @stoneangelbeer next week. Don’t make plans next Saturday afternoon (other than coming down to the brewery, of course).

This room at 272 Main Street is coming along nicely, and looking mighty sexy at that. The concept is based off of pubs you'll find in Scotland, where you can pretty much find everything under the rainbow. The fellow behind it, owner Bryan Goertz, has experience working some of Winnipeg's best cafes, including Thom Bargen and Parlour Coffee, along with time spent in the UK -- particularly Scotland, as does general manager Jess Preachuk. On the coffee side of things they'll be featuring roasts from around the world, while for food you can expect numerous vegetarian, vegan and gluten-free options. Along with beer and cider on tap, they will also have bone broth from Winnipeg's Bones & Marrow, while the wine list will feature a selection of natural wines too. It is scheduled to open on June 15.

Grey Owl - coming at ya —— stay tuned for soft open hours, ya’ hosers.