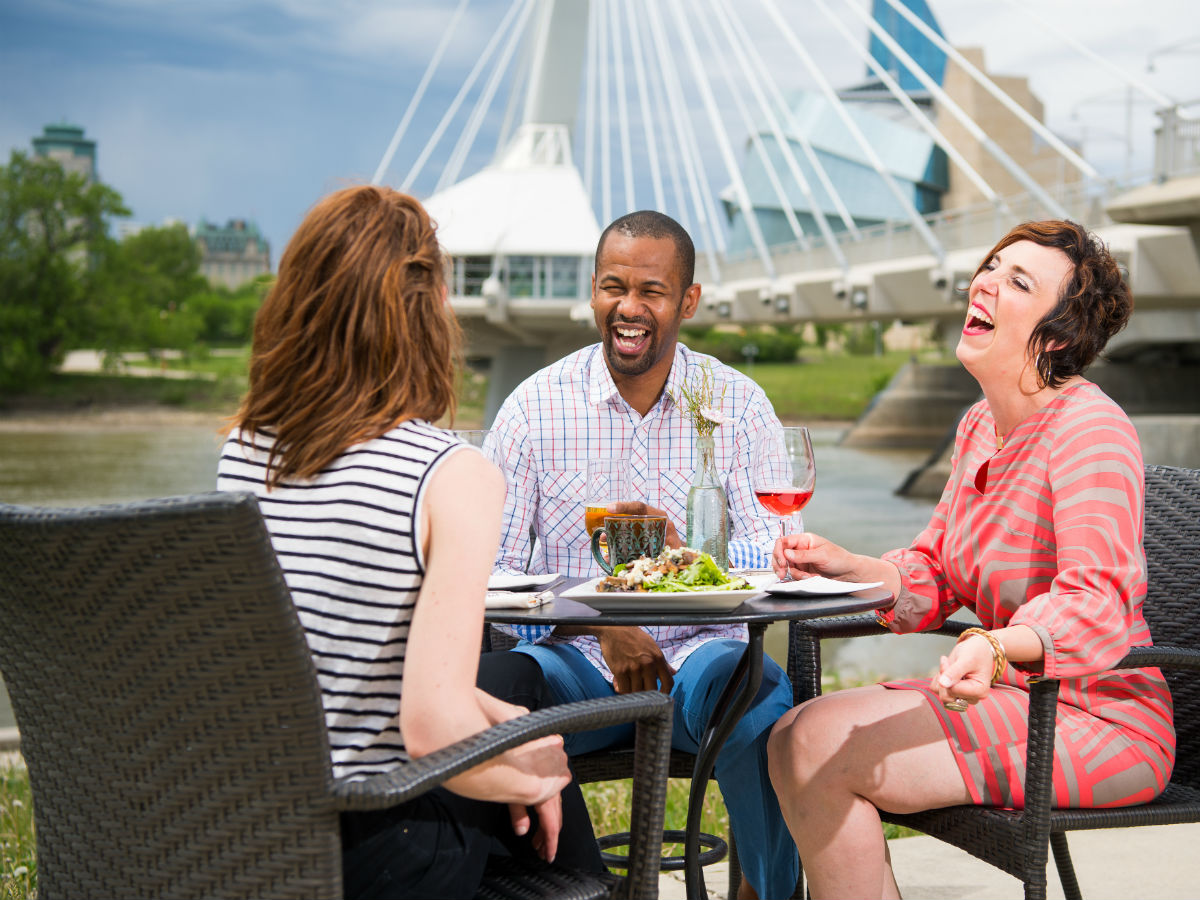 Patio season is in full swing in St. Boniface

Add some French flavour to your outdoor dining experiences this summer in historic St. Boniface.

And yes, that means both flavour, in that you could be eating French cuisine, and the more atmospheric flavour of this charming neighbourhood that is the centre of the city’s Franco-Manitoban community.

In fact, St. B is the largest francophone community in Western Canada, which makes it the best spot to experience French cuisine on some of the city’s best patios – which is what this list is all about.

With its 1913 train station interior and attached 1914 train coach dining room, Resto Gare’s ambiance harkens back to the Mid-Modern/Edwardian Era. Tucked within the restaurant and the train cart is the courtyard-style patio, which is one plum peach. It is peppered with bistro sets, and four-top tables, boarder with plants with large ferns sprinkled throughout. In other words, a peachy spot to do some outdoor dining.

Chef Melissa Makarenko’s menu features countless updates on continental classics, from steak frites with Caesar dressed fries, to ricotta gnocchi dressed with romesco sauce, to house made charcuterie and crepes stuffed with prawns covered in a gruyere and chardonnay veloute. Most of the proteins – particularly the game dishes like elk and bison – are sourced locally, as are most of the vegetables when in season (which means now).

As a bonus, they have live jazz on the patio every Thursday night throughout the summer.

Easily one of the city’s best hidden gem patios, this leafy little number is encased in greenery that works its way through an iron fence that hides it from the street. There’s also a tall wood fence that is studded with plants for that added bit of privacy. Most of the tables come with umbrellas, should the sun be blazing, while the padded chairs will make you want to nestle in for an evening or afternoon.

Had an amazing champagne birthday thanks to @mark_humphreys204 cheers to 27!

The menu features numerous French fusion staples that regulars would cause an uproar over should they ever be removed, like duck confit pot stickers with orange chipotle sauce, numerous combinations of moules frites, and penne Inferno, with its chili cream sauce. That being said, watch closely for the impressive list of daily specials, where chef Sean McGillivray comes up with colourful creations like adobo fried rabbit served with mac n’ cheese, and halibut on cucumber green curry with apple/fennel slaw.

Winnipeg institution Stella’s now has seven locations, including one in the Centre Culturel Franco-Manitobain, and while the majority of them have pretty swish patios, this one might be their finest. This courtyard-style patio is huge, providing easily one of the biggest outdoor eating areas in the city, and has multiple trees growing within it to add that extra bit of natural charm and beauty (particularly in fall as the leaves change) and plenty of shade (the good kind).

Most awesome shady spot for breakfast

This being a Stella’s, brunch is the jam (just like their housemade jam is the jam #jammy), while they have always been a best bet for vegans, vegetarians, and those of you that like to eat a bit healthier. Of course, they also bake all their own breads and pastries, so it’s also a good choice to carb up, courtyard style, while that tortière with maple cream sauce is the boss.

The patio also frequently plays host to live music. Pretty much just check out all the Instagram posts about it and you’ll be sold. It’s an office favourite here at Tourism Winnipeg for sure.

Another brunch powerhouse in St. B is Chaise, which also shines when it comes to nightly prix fixe menus. The patio is right on the front porch, which you enter under a lovely little hanging-plant-lined awning. Along with featuring a great deal of plants and greenery, the patio is also screened, which makes it an excellent choice at dusk (not to say mosquitos in Winnipeg are ever as bad as legend would have it).

A great dining option, should you have a group of three or more, is to do the family style prix fixe menu, the portions of which are huge (especially at $20 per person at brunch and lunch, and just $25 at dinner).

Goodluck in Vancouver Hyeryun! You've brought a lot of joy and happiness in Winnipeg! I'm sad and jealous that you are moving away, but I know you will do just fine & will enjoy living in the west coast. You would be an amazing nurse there & people will love you! Till we meet again. #koreanheartcraze #koreanheart #gomabseubnida

It’s not just French cuisine that St. B is known for. Pasquale’s is an Italian staple in the city, which has been rocking out pastas, pizzas and other staples since 1977. Come summer, their rooftop patio is perfectly perched above a sprightly stretch of Marion Street, making it ideal for both people watching, while literally and figuratively looking down on them (there’s no need to comment, “hey, I bet you wish you were up here enjoying a glass of Pinot Grigio while tucking into Nona’s Monster Meatballs,” as that will be quite evident from street level).

In fact, while dining outdoors amongst the treetops at  Pasquale’s you just may run into Global News anchor Heather Steele, who will surely be enjoying a beergarita and some pan fritta.

With sweeping views of The Forks, the Esplanade Riel, and the downtown skyline, Promenade’s patio is la belle dame. In fact, we are such fans of dining al fresco here while taking in the city that  we wrote a whole article about it a few years ago.

But, while we have you here, you should know that Promenade’s patio is primetime on Canada Day, when you can get one of the best views of the fireworks accompanied by some superb wining and dining in the city.

Our last stop in this patio guide is La Belle Baguette, where you can sit curb side under jaunty red umbrellas along the quiet Avenue de la Cathedrale. Chef Alix Loiselle’s pastries here are so good that you might have to ask your patio partner to stop talking, so you can have yourself a moment. In particular, look out for  anything this summer that involves the use of local strawberries, which Loiselle and his crew source from the most-excellent French market, Jardins St-Léon (419 St. Mary’s Road). As well, they make indulgent French sandwiches, like a Croque Monsieur served in a croissant that is slathered in bechamel sauce before being broiled. #ohmy

The one thing we need to warn you about this patio is, you are guaranteed to only get hungrier and buy more and more things while seated here. You see, the bakery smells absolutely incredible inside, so every time someone opens the door that smell – of butter, flour toasting, and sweetness – wafts out over the area and it is too much for mere mortals to resist.

Perfect place to have a coffee and croissant this morning! Come check out our patio, open week days at 7am! #earlyriser #winnipegbakery #patioseason