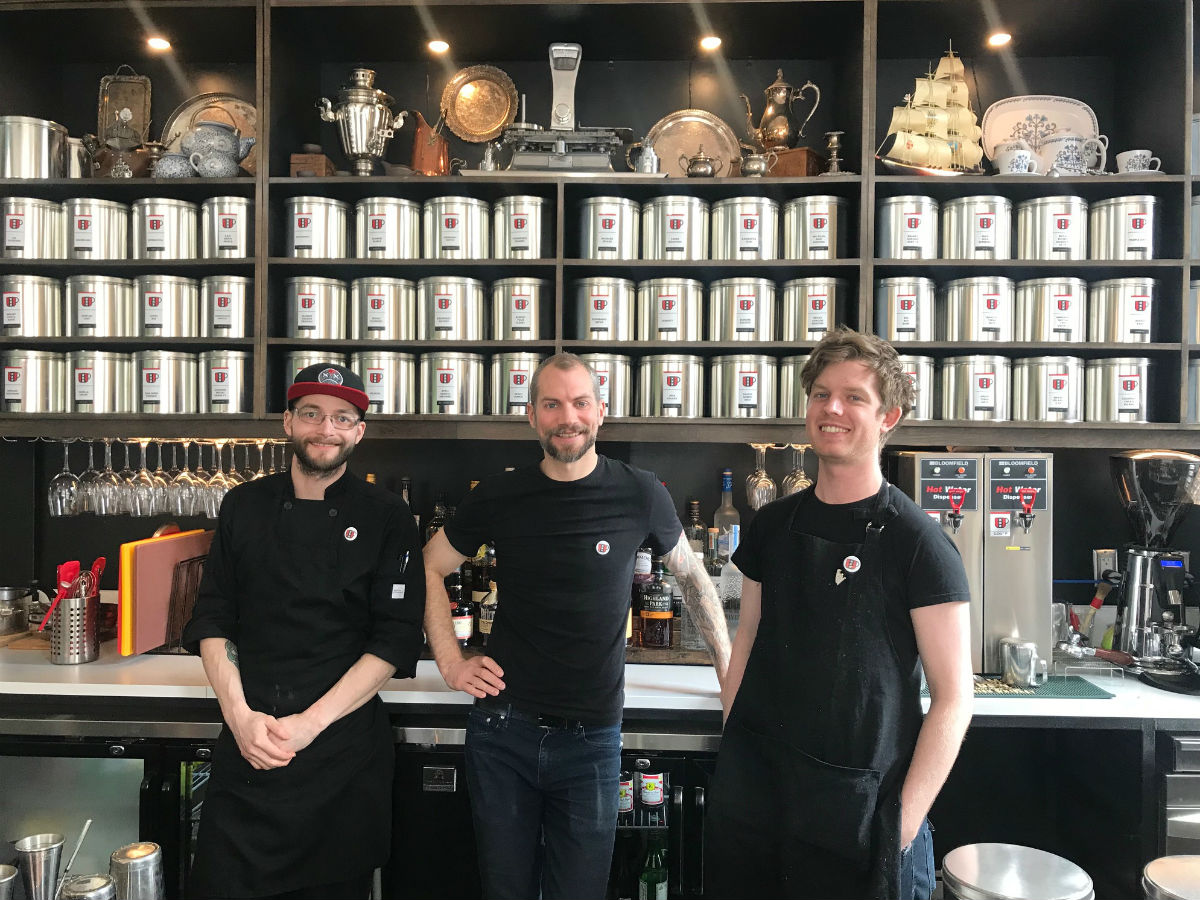 What started as simply a tea retail shop (whose selection you would say is far from simplistic) in summer of 2016, has quickly evolved into one of the city’s jazziest little fully licensed cafes.

The space now features a gorgeous bar filled with thousands of pennies from Scotland; super handsome tables and chairs that have been custom built by local welder Matthew DeRyckere (be sure to admire the detail of hooks under ever stool); a giant Netherlands-inspired mural that runs one length of wall, by Winnipeg artist Michael Johnston; and (hopefully) soon an outdoor patio that will seat 40 overlooking Old Market Square and the charming shop-lined section of Albert Street.

Indeed, you'd be hard-pressed to find another area in the city teeming with so many great spots for wining, dining, casual eats and nightlife.

Just a stone’s throw away is Cordova Tapas & Wine, Albert Street Cocktail Company, Across the Board Café, Shawarma Khan, King + Bannatyne, Chosabi, Peasant Cookery and the King’s Head Pub (to name but a few) – the majority of which have patios that will make the whole area feel like a little café lined street in Europe come summer – which is exactly what co-owner Mark Turner is hoping for.

“This whole area has become such a really nice little hub,” said Amsterdam Tea Room co-owner Mark Turner. “Which is exactly what you want -- as if it [this area in the Exchange] was like old towns in Europe.”

Turner, who owns Amsterdam Tea Room with business partner Dan Card, is originally from Rhu, Scotland (located just outside Glasgow) and has some worldly experience over the last 18 years when it comes to working and running bars, including stints in France, Austria, Australia, and here in Winnipeg.

He has family in Winnipeg, so he was no stranger to trips across the pond to the prairies when he was growing up. But, it wasn’t until he was back in the city in 2012 for his gran’s 90th birthday, that it really dawned on him that Winnipeg is where he needed to be.

“At the time, there was recession in Glasgow, and a lot of my buddies who had opened bars were now closing them – so it was not the best time in Glasgow” said Turner. “Then, when I was here, Fringe Festival was on and I was having a beer in Old Market Square and it hit me how much I love Winnipeg; it’s my second home and I thought how I’d love to open up a business here in the Exchange.”

Turner would eventually move two years later to Winnipeg in 2014, and started bartending at The King’s Head, Winnipeg’s iconic pub which you can see across Old Market Square directly from the Amsterdam Tea Room’s massive main window.

“I loved that [tending bar at the King’s Head], and I really got the feel for the industry here and the people,” continued Turner.

“And then I met my now business partner Dan through our uncles who are best friends – which of course is a classic Winnipeg story [as everyone seems to know everyone here].”

Upon meeting, one thing they had in common was the love of European café culture, particularly the atmosphere in Amsterdam. Around the same time in 2016, this location at 211 Bannatyne Avenue came up for grabs, but the space was set up for retail, so once they took over the lease, Dan came up with the idea of selling tea.

The two partners then took the whole year – while running the tea store – to learn as much about quality teas as possible, attending massive expos in Las Vegas where they would meet small scale farmers and suppliers.

“The more I learned about tea, the more my whisky, beer and wine knowledge became important” said Turner.

“A lot of the terminology transfers over – especially when you get into single estate teas where soil conditions, and the time of year the tea is picked, and all these different factors create different varieties within the same tea plant… It’s all super interesting.”

They now sell 75 kinds of tea, which you can get steeped onsite, and find throughout the food and cocktail list. Turner jokes that it’s certainly a long way from when he was a kid, when the two choices for tea were milk or sugar.

On the cocktail side of things, I would highly recommend the Atr Old Fashion, which utilizes a smoked tea, chocolate bitters, burnt orange and a Lapsang tea simple syrup to great effect. The wine list goes from cheap(ish) and cherriful sauv blancs and granacha’s, to some pricey bottles from one of Canada’s premier wineries, Burrowing Owl, along with sparking options, and sweet numbers for digestifs. (A good bet for everything is the Haceienda Lopez dry rose – especially come patio season). There’s also a mix of local and international beers served in bottles or cans.

For food, I was smitten with the open-faced pickled herring on Tall Grass Prairie sourdough, which also features julienne radish, cucumber, gherkins and a base of hummus. It was refreshing and quite tasty, while you have to get it accompanied with a bowl of snert – which is a traditional Dutch soup that is like a split pea soup you’d find at Festival du Voyageur, but nuttier and way thicker (they say your spoon should be able to stand up straight in the soup, which you can do with Amsterdam’s).

There’s also a smattering of refreshing canape-like snacks including endive with pear, pickled grapes, blue cheese and walnuts (a classic combo), charcuterie plates, and a selection of other Dutch sandwiches that are put in a panini press.

Goodies Bake Shop is also making a selection of pastries and cakes for them, several of which utilize teas from the shop.

A post shared by Amsterdam Tea Room Winnipeg (@amsterdamtearoomwinnipeg) on Feb 22, 2018 at 9:04am PST

As to how authentic the Dutch menu is, our very own Sherri-Leah Lendering, who comes from Rotterdam and has become a bit of a regular here, says this:

Amsterdam Tea Room is Open Tuesday-Saturday, 10 a.m. to midnight, but will be extended to seven days a week and later service hours on Friday and Saturday this summer. They also regularly host live music, and they do play sports on their projection screen for certain big events, like Jets games and the upcoming World Cup.