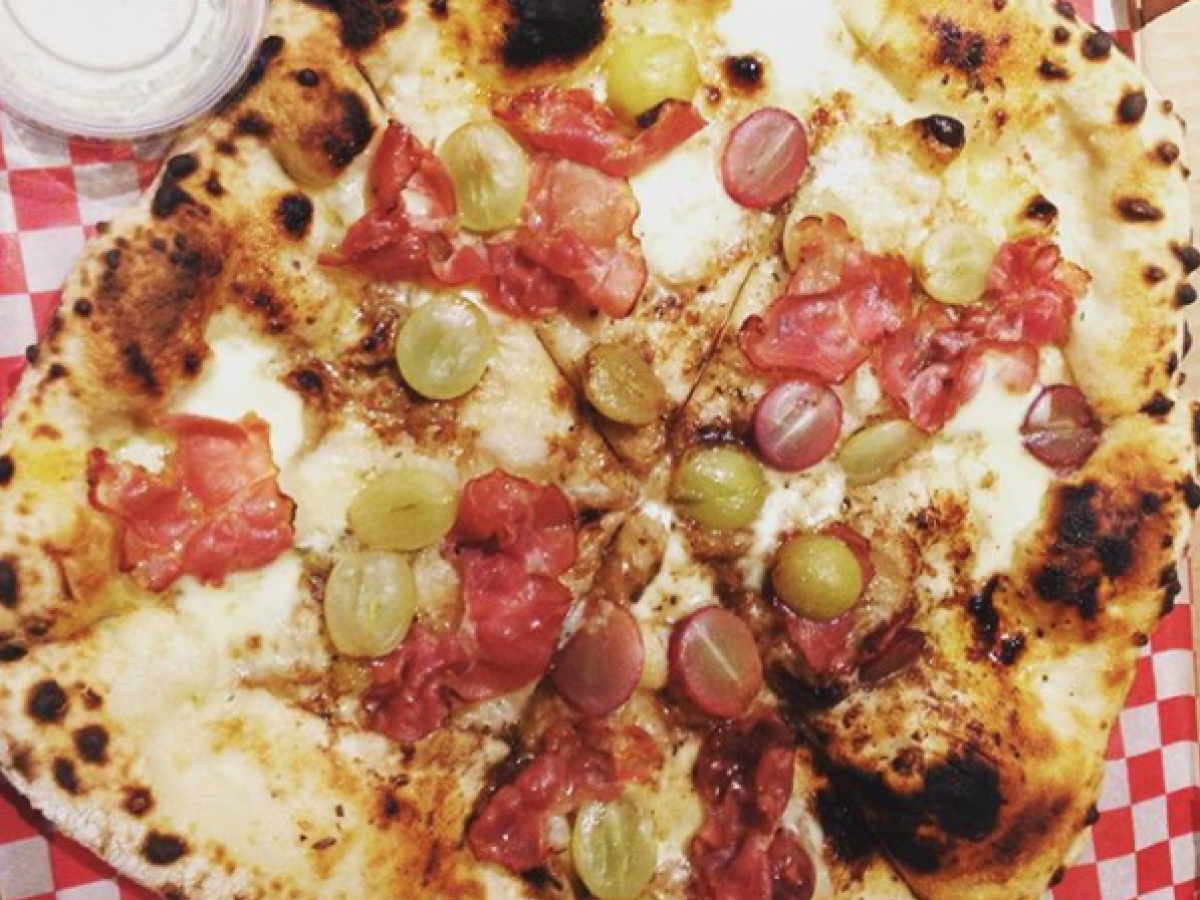 Is this ugly delicious grape and blue cheese with pancetta the best pizza in Winnipeg? Our food writer says yes! (PCG)

If you thought ClickHole was bold when they ranked the world’s best religions, we’ve taken it even further here at Tourism Winnipeg with an article on the city’s best pizzas and pizza places.

While nationally The Peg may be known as a perogy town, we firmly believe that these pies below would have no qualms entering a best Canadian pizza contest and taking a slice of the prize (and that wasn’t a Pizza Hut reference, but if you thought it was then you really need to read on).

Surely some great pies have been left off this list, while we’ve even had some eateries attempt to shell out some dough to get on it, but no! We are staying crusty – like those fabulous pizzas from the Red Ember in The Forks Market – and sticking to our guns here.

(And yes, we also just watched the pizza episode of  Ugly Delicious on Netflix and it forced our hand to write this article).

Our Top Six (in no particular order)

Were Sir Mix-a-lot to break down my pizza preferences, it would flow like this: “I like sweet pies and I cannot lie, you salty pizzas can’t deny…”

By listing this pizza first, does it make it the best in the city? I’m willing to say yes because the grape and blue cheese (add pancetta) at Super Deluxe is a masterpiece. (A pizza so nice, we've pictured it in this article twice!)

Roasted grapes and rosemary is are one of the best things ever and I must give a shout-out to my second favourite Italian Pino Di Cerbo for introducing me to this combo when we were on this cooking contest show together (he did it on focaccia in our apartment). At Super Deluxe, they take it to the next level by using a rosemary garlic oil, while their dough is just beautiful (sure, it’s the same as their original spot Vera Pizzeria (670 Osborne Street), but for some reason the dough is even chewier at Super Deluxe).

Tears almost welled up in my eyes the first time I had this pizza; it is that good.

On that note,  Vera was also our office’s overall top pick for best pizza – particularly for a straight up Margherita – so clearly brothers Terik and Chris Cabildo and their teams are fighting the delicious fight.

The Lucia was my first Winnipeg pizza love, which I discovered six years ago after we moved to River Heights from Vancouver (Gusto, located at 404 Academy, is just two blocks from our house). I still order this pizza every time I go there.

It has a sweetness byway of fig jam and caramelized onions, while you get a salty and peppery balance from the Calabrese salami, pecorino and a smattering of arugula. The gorgonzola adds that extra tang and creaminess, while the dough at Gusto -- which is cooked in a wood-fired oven -- has a beautiful char while remaining slightly chewy.

Everything from The Red Ember (The Forks Market and Food Truck)

The Red Ember has become the gold standard in the city for pizza. It first started with their massive food truck (which is perhaps the second-largest in North America; it’s made out of a converted shipping container), utilizing local ingredients (including meat from Zinn Farms, which is owned Monika and Andreas Zinn, Red Ember owner Stephen Zinn’s mom and brother). You can now get it year-round in The Forks Market, in their fancy new gas oven from Italy, which Franco Pepe himself (for those of you that have watched the pizza episode of Ugly Delicious will know), showed them the ropes on.

Our director of marketing, Cody Chomiak, has this to say about it:

“My absolute favourite pizza is from The Red Ember – my dad who is a pizza aficionado even said it is the best crust he’s ever had. I love the Twist & Sprout which has crème fraiche/ Brussel sprouts/roast garlic/pancetta/blue cheese – it’s not your typical pizza but it’s so fresh and delicious. I also love the Hot N Honey and Crete-Za.

First weekend in the books! Thank you everyone, especially @thecommonwpg and @theforkswinnipeg for the very warm welcome!

Santa Ana absolutely kills it when it comes to take-out. Chef/owner Darek Wozny was telling us that on weekdays they do anywhere from 50 to 150 pizzas per night, while on weekends, it’s between 250 to 400 pies per night – and that’s just for pickup (sorry, no delivery).

To eat in the restaurant, reservations are now three weeks out (the restaurant seats 49) for weekdays; and a three-month wait list for weekends – “we have nothing until mid-June,” says Wozny. That being said, Wozny recommends you can always call the restaurant after 7 p.m., as cancellations do happen and they don’t over book the place (in that, say a reservation is for four people at 6 p.m., they won’t book that table for 8 p.m.; so you never get rushed out of the place #classy). Plus, when you have surely the most reasonably priced wine list in the city – the majority of bottles are just $15 - $25 – eating in is a great option.

The best pizza crusts are cooked at high temps, and Carbone cranks up the coal-fired oven heat for its pies (850 degrees! Toasty). We're a big fan of the Calabrese and its spicy eggplant, but discerning meat-lovers will always enjoy the quality of charcuterie they use for their ‘zas. The New White, with its roasted garlic sauce and pesto, is also guaranteed to make your tastebuds sing while ensuring that no one will want to make out with you (which is a pretty even trade off).

An obvious choice, since Diana is a five-time national pizza champ (the only reason she hasn’t won more? She judges the competitions now). There are no bad toppings here (although try out the Fragoli di Capra – it has strawberries and it’s even more delicious than pineapple, don’t @ me) but make sure you get the Moosehead crust regardless of what you order!

Our two favourites on a Sunday afternoon! Stop by for a late lunch or early dinner!

Harth Mozza and Wine Bar (1-980 St Anne's Road) – While the house made pastas and appetizers tend to get a lot of the attention in this new(ish) handsome restaurant, their charred and chewy pizzas are of equal acclaim. This place, like Santa Ana – which is also in St. Vital, is also always busy, so make your reservations far in advance.

Aurora Pizzeria and Cafe (842 Corydon Avenue) – The family behind this restaurant are from Rome and they make some nice airy Neapolitan-style pizzas, along with occasionally Roman ones (which are square in shape).

Gondola (various locations) – We had to throw one Winnipeg-based chain on here and Gondola gets it done because two Winnipeg ex-pats we know well – one based in Bangkok, the other in Vancouver – have it in their flying-to-Winnipeg-rider that they must be met at the airport’s Hug Rug with a Gondy’s thin crust.

The Grove Pub and Restaurant (164 Stafford Street) – Simply put, pretty much everything is really good at the Grove, especially the individual-sized pizzas, along with the burgers, fries, house corned beef in the Rueben (which is worth an article alone), beer selection…. You get the picture.

A Little Pizza Heaven (120 Osborne Street) – This is the top choice from Gillian Chester, our manager of communications and travel media, primarily because their crust – which they lather with garlic butter – is so amazing.

D-Jay’s Restaurant & Ichabods Lounge (3354 Portage Avenue) – Because my father-in-law allowed me to marry his daughter, I will allow his favourite pizza place to be on this list. All jokes aside, the Mushroom Fusion pizza here is the bomb, loaded with fungi, and a nearly absurd amount of cheese on a thin(ish) crust.

Corrientes Argentine Pizzeria (137 Bannatyne Avenue) – If you like melted cheese (which should pretty much be everyone who is neither lactose intolerant or vegan) then Argentinian pizza is a good bet. Plus, as our graphic designer Karen Allen states, "Corrientes makes the most delicious spinach pizza in the city – it’s called the Valentino – and it’s my favourite vegetarian pizza."

Fired Up (food truck) – While it may often be overshadowed by Winnipeg's larger pizza truck (the aforementioned Red Ember), we are still big fans of the crust and simple ingredients from this vehicle that utilizes a wood-burning oven right on the truck (you'll often see one of the chefs come outside to grab more wood from the little cubby hole located near the window where you order, which is good fun).