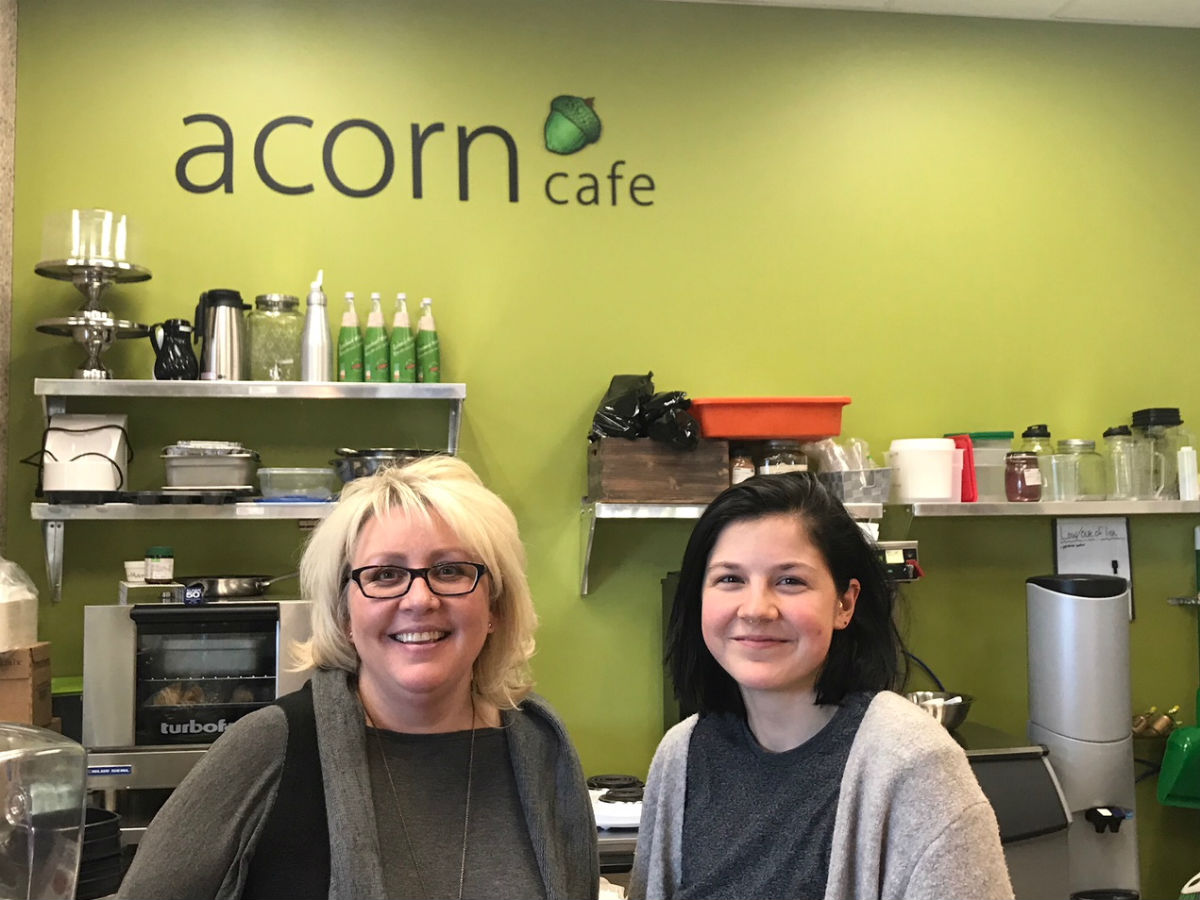 If Kermit the Frog were to enter Generation Green’s new location on Main Street and have himself a vegan grilled cheese and a dandelion latte, followed by browsing the shelves stocked with eco-friendly products, surely he would be singing a different tune.   Sure, back in 1970 it may not have been easy “Bein’ Green,”* but today a lot has changed, especially here in Winnipeg when you can find so many stellar local producers, along with a completely vegan café, all under one roof.

Generation Green started as an aisle space in The Forks Market in the South Aisle. The main focus in the beginning was natural body products, which was something owner Sherry Sobey said she became cognizant of after she developed a rare tumour.

“When that happened, my health became so sacred to me – like, you grasp for control when you have a health scare and I just started to be conscious of what I put on my body,” said Sobey.

“So, I started looking for clean products, and I found that to be easiest searching local, because I could talk to the makers and I could get the information as to what is here that can benefit me and how it can stand up to a conventional product.”

GIVEAWAY ALERT We’ve teamed up with some of our favorite people to bring you an epic giveaway! How to enter: 1. Follow all companies listed below 2. Like this image in each account listed (the list is the same in each account so going through will be a breeze) 3. Tag 3 friends you would share this with! @bliss_gourmet – 5x gourmet cookies @borealwildcraft – tea infuser + tea @flora_and_farmer – spread and marmalade @generationgreenwpg – not shown - $40 gift card @goldbonebroth – 5x containers bone broth @goodpeoplefoods – 3x veggie infused granolas @gorpbar – energy bar mix @hollow_reed_holistic – book + 2x tea @rasaholistic – 2x ghee + ayurvedic chew @wolseleykombucha – 2x howlers kombucha That’s it! Good luck!

From there, it just began to snowball: Sobey started the small Generation Green kiosk and over time her range of products just kept growing due to both new producers approaching her and customers alerting her to more and more local products that were coming on the market that she could start carrying.

“When we hit the five-year mark, we decided to grow the business, and the last area we really wanted to focus on was what we put in our bodies,” said Sobey. “So now, here in this new space, we have what we put on our bodies, what we put around our bodies (with the house cleaning products), and what we put in it with our Acorn Café.”

The new location of Generation Green opened at 433 Main Street this past December, and the 2,500 sq. ft. space features everything from cookware; to housecleaning products – including popular refill stations for laundry soaps, dish soaps and shampoo; cards and giftware; food products; and the all-vegan Acorn Café, which has some inside seating and does takeout (all utilizing biodegradable containers and utensils, of course).

Spring and summer is all about fresh berries and cool treats Get in the ~mood~ with our raspberry coconut parfait topped with @fortifynaturalwellness granola! Here til 6:30!! Happy Saturday #acorncafewpg #vegan #madeinwinnipeg #shoplocal #supportlocal #fortify #parfait #vegancafe #downtown #wpg #exchange #generationgreenwpg

For drinks from the Acorn you can get smoothies (including a blue algae one), an assortment of coffee drinks (they use DeLuca’s locally roasted free trade organic beans), teas from Hollow Reed Holistic and Amsterdam Tea Room, and various “shots” (not the boozy kind) and boosters, using health foods like chaga (a fungi that tends to grow on birch trees), pine pollen and maca root.

On the food side of things, they are doing overnight oats (using local Adagio Acres Naked Oats), chia seed pudding, locally made granola, along with carrying samosas from Charisma of India and baked goods from Nosh on This (which are also gluten free),

The star attraction so far has been the rotating daily lunch feature, which can alternate from grilled “cheese” sandwiches, to mac and cheese using quinoa pasta, to gluten-free perogies that come from Manitoba producer Amanda Lynn.

While this may all sound a little hippy dippy for some readers I assure you, as a cheese-loving, meat eater who normally would order a full-fat flat white and whose diet no one could claim to be “holistic,” you don’t end up missing any of that, as the dishes are all very flavourful, lively with acidity, while having interesting textures.

For instance, the picturesque charcoal latte (which you can get made with macadamia nut milk, instead of almond or soy; neither of which I am a fan of), was velvety smooth and did not make me miss the dairy (just watch you don’t end up with a charcoal moustache).

The mac and cheese was the biggest surprise, considering my main vegan cheese background is Daiya brand, which Sobey and I agree is not likely to convert a turophile. (Sobey too is not a vegan and loves cheese, but admits that cheese stopped loving her back so she was always in search of an alternative). Anyway, this “cheese” sauce was really tangy and had the sort of flavour you’d expect from a béchamel featuring a good smattering of Dijon mustard – which I’m told comes from a hearty amount of nutritional yeast – while the gluten free quinoa pasta elbows were toothy.

All the “cheeses” they serve, including a dill Havarti and a pepper corn jack used in the grilled cheeses are made locally by Céline Land, whose business is called Vegan Fromagerie & Seitan. I tried them individually and they are straight up like a Havarti, just with a texture that has a bit more of a chew to it from the use of soy, while it still melts like a mozzarella.

Generation Green will soon also be stocking Vegan Fromagerie & Seitan’s cheeses to sell commercially, along with their seitan bacon, pastrami and spicy pepperoni (which, for those of you not in the vegan know, is a meat substitute composed of wheat protein).

Sobey found Land’s company via her young female staff members whom she credits with helping her stay up to trend on all things vegan, particularly Acorn Café manager Lily Thrift and Dallas Gillingham, who is the marketing manager who runs their Instagram accounts.

“I’ve always said that what makes us successful is the people I’ve been fortunate to have here with me,” said Sobey.   “My staff don’t turn over; we’re like a little family.”

Generation Green and the Acorn Café are open seven days a week, Monday - Friday, 7:30 a.m. to 6:30 p.m.; Saturday, 9:30 a.m. to 6:30 p.m.; Sunday, 11 a.m. to 4 p.m. They also constantly host workshops on everything from preparing vegan food, to highlighting local products, so follow their Instagram account for details.

*To give credit where credit is due, the song “ Bein’ Green” is by Joe Raposo, and was originally performed by Jim Henson (as Kermit)