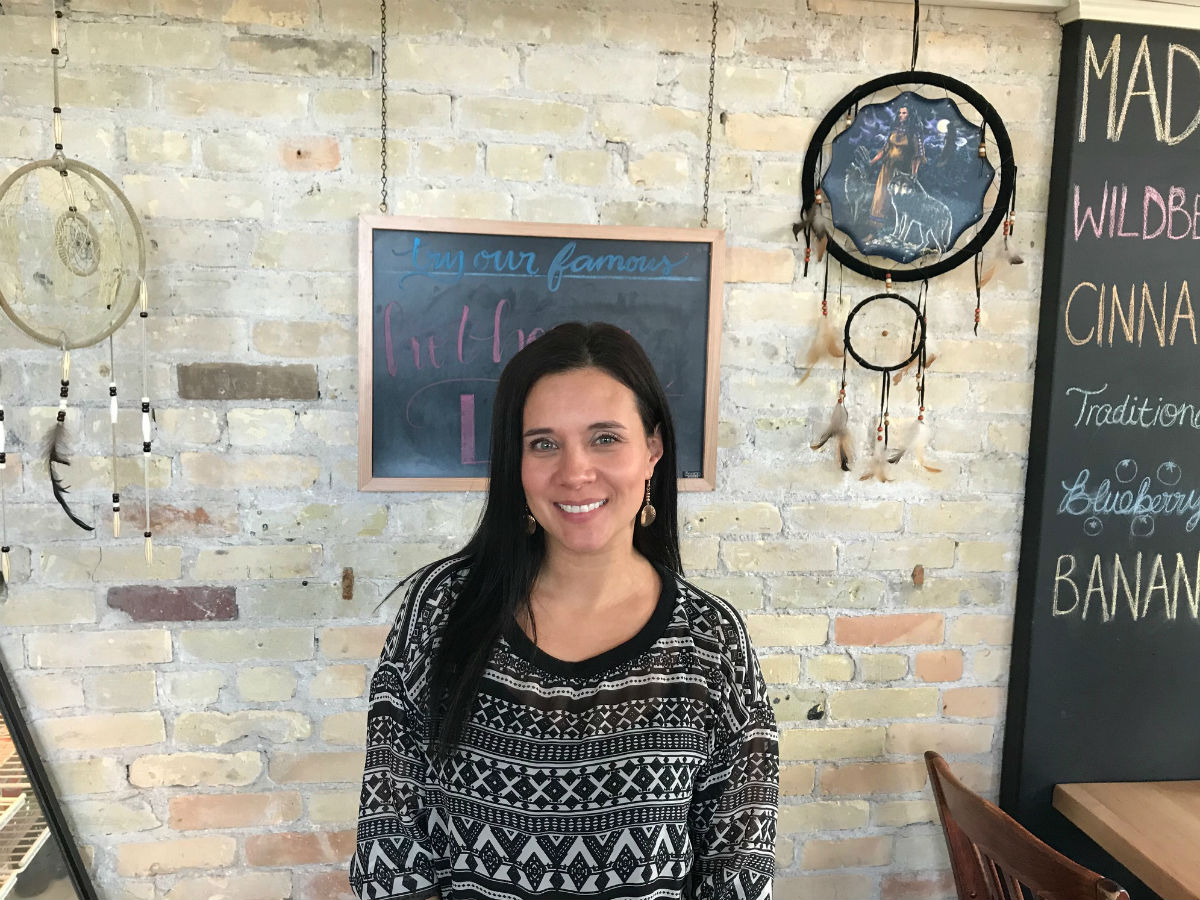 Being one of only a couple Indigenous-owned and operated restaurants in Canada that is rooted in First Nations cuisine, the restaurant is certainly unique, but it’s the subtler, touching details that have made it such a beloved spot and story.

“Our mandate is to hire people that have had previous barriers to employment,” said Bruneau-Guenther.

“We have no trained chefs… I teach them everything I know and even I’m not a trained chef either; I didn’t go to culinary school. So, when you are doing constant training, that can make things a bit more difficult, but that’s why I did this: I wanted to make this work for the people in the community.”

We hosted a traditional meal/ gathering for educators from around the world who visited Winnipeg! Miigwetch Mahekan Ethinew (Parry Francois) for giving them a warm welcome into our country, for sharing truth and wisdom, especially your message “you can have all the education in life but one of the hardest things is to have that love” See our Facebook page for a full video! #feastcafebistro #firstnationtraditions #indigenousfeast #community

She’s already been featured in publications and media outlets including Chatelaine, Canadian Living, WestJet Magazine and the CBC; while next month she’ll be presenting at the Terroir Symposium in Toronto and cooking at the First Nations Fire Feast in the Yukon. She has also done events for Destination Canada in Vancouver and was the 2017 Travel Manitoba Indigenous Tourism Award winner.

It’s been quite the success story so far, and as Christa relates in this extended interview below, it was a long time in the making.

[Please note: This interview has been edited and condensed for formatting purposes, while editor's notes appear in italics.]

Planting the seed: How running a daycare made Bruneau-Guenther discover her Indigenous culinary roots

I owned a daycare for ten years, starting when I was 22 years old. That’s where my passion for traditional foods started and that’s where I started seeing the need to reconnect our culture through our traditional foods. Most of these children were from the inner city… and opening up this daycare I wanted to create a holistic, grassroots program for inner city families and so I targeted children that couldn’t function in large daycare facilities. These kids had been diagnosed with ADHD, severe behavioral problems, suicidal… and I started to realize that these kids weren’t happy, that they couldn’t learn, and that a lot of them weren’t getting breakfast or were just on a sugar-based diet.

So, I thought to create a program that was really based on the food. And [once we started] some of these children didn’t even want to eat the food; they’d never had a cucumber or a strawberry – let alone cut one – so we developed this food program.

I was licensed under the provincial government so I had to follow Canada’s Food Guide for every meal so we created a breakfast program, snack program and lunch program while also creating recipes for parents to prepare at home for dinner.

To start, we would take different groups of kids to the grocery store to connect them to the food, so they could touch the food, smell the food… and then we integrated them in the cooking process. And we saw this transformation happen, even after a few weeks of feeding these children different foods, healthier foods…. They were completely changed… they were becoming happier.

At that time, Canada’s Food Guide for First Nations, Métis and Inuit People came out and then I started seeing about the  three sisters [winter squash, maize and beans], and how squash was a traditional food, and about all these berries… and hazelnuts and pine nuts, the herbs, wild garlic and wild ginger, and all those things that grow on this land that is traditional. We had this mini garden [at the daycare], so we started growing some of our traditional foods and integrating that into our cooking program.

Taco Tuesday! You know you want one! We also have a vegan taco, a vegetarian known as the Gatherer, and our Sundance Taco- maple shredded chicken! #feastcafebistro #powwowtaco #bison #local #weeklycravings #bothwellcheddar

For staff and I – particularly Trevor [Bruneau; now a chef at Feast who worked with Christa for four years at the daycare] who learned how to cook with me and lost over 150 lbs. over four years – we started connecting to our culture through food. There was a sense of pride and a sense of identity and self-worth that started happening when you started recognizing your traditional foods.

Then we went to as many cultural events as we could… we were participating in all of that just to learn more about where we come from and who we are to reconnect to all aspects of our culture.

Upon closing the daycare, Christa began to look for more books on Indigenous cooking and found that there was next to nothing. She then attended a conference put on by Food Matters Manitoba where an elder – who Christa would later find out designed Canada’s Food Guide for First Nations, Métis and Inuit People – was speaking about traditional foods.

I told her that this [the Food Guide] was all I could find. So when we met, I drained her brain and we continued to talk and she shared a lot of food knowledge with me. And it was lot of learning and discovering and growing in my culture through that.

Then I started doing community service stuff; I was cooking with girls in group homes and studying more on canning and gardening. I might clean up nice, but I prefer to be gardening in my bare feet.

So, I basically just started doing a lot of cooking in the community, and that’s when people started to find out who I was.

I also started going to every little local place here [in the West End,  where the majority of Winnipeg’s ethnic restaurants and markets are] and started talking to the owners of all the shops on Notre Dame and got all these recipes for traditional Thai, Greek, Italian and East Indian dishes to learn how to include two or three Indigenous ingredients in there so I can connect to that food. So I did that for a few years, until the opportunity came for investment in this building, which includes the restaurant space and the 250-seat theatre next door.

I should mention that I also had been working since I was 10, first doing paper routes, then babysitting at age 12, while at the age of 15 I got my first restaurant job as a dishwasher, server and cook at a hotel outside of the city.

How Feast came to fruition

I had been living in the West End for 12 years and this opportunity came up to take over the Ellice Café and Theatre [the building where Feast now exists], which was owned by New Life Ministries under pastor  Harry Lehotsky – who had been such a huge advocate for the West End.

They [New Life Ministries] had opened up the restaurant with a vision to create a space where the less fortunate could perhaps be in a restaurant for the first time in their lives. Unfortunately, Harry died within six months of them opening it, and the ministry was unable to keep it going as he had been the heartbeat.

The restaurant sat vacant for a few years, and, while there were people interested in buying it, they wanted to sell it to someone with a similar vision and similar heart for the community as Harry. So when we approached them to buy the building, they said, “We’ve been praying for someone like you for years!” and I was like, "oh boy!" [Bruneau-Guenther chuckles]. Those were obviously big boots to fill as he was all about the community, and all about the people.

From there, it just made sense to open up a restaurant that focuses on traditional Indigenous foods.

When Feast opened in December 2016, it was only one of a few Indigenous restaurants in Canada, with Vancouver's Salmon n' Bannock Bistro being one restaurant that Bruneau-Guenther looked up to.

The menu and the rewards

We thought this [an Indigenous-focused restaurant] had to happen. But, looking at Salmon n' Bannock, you’ll quickly notice that this is a humbler menu; I’m not a trained chef and this is not as fancy. But, if we did take it up a notch, we would have to charge $25 to $30 a plate and would completely segregate our local Indigenous community and most of this [West End] community for that matter.

So, I thought, "how do I develop a menu that promotes as many traditional foods in modern ways that people are familiar with, all while using as many Manitoba ingredients that I can?" And this menu was one of the hardest things I’ve done.

When bison is $8.49 a pound, compared to beef, which is three bucks a pound, it’s tough. Like I don’t take a salary [she laughs] and probably never will. But, that is okay – I’ll get a dividend one day.

So there are certain decisions I’ve made in order to make this a possibility. But, when I see people come from three hours north of here off a reservation who would maybe not feel comfortable walking into a restaurant – who would maybe usually would go to McDonald’s instead – all line up to come try an Indian taco made from Manitoba bison and wild garlic and all sorts of vegetables and all those healthy ingredients and they devour it –  that’s what it’s about for me.