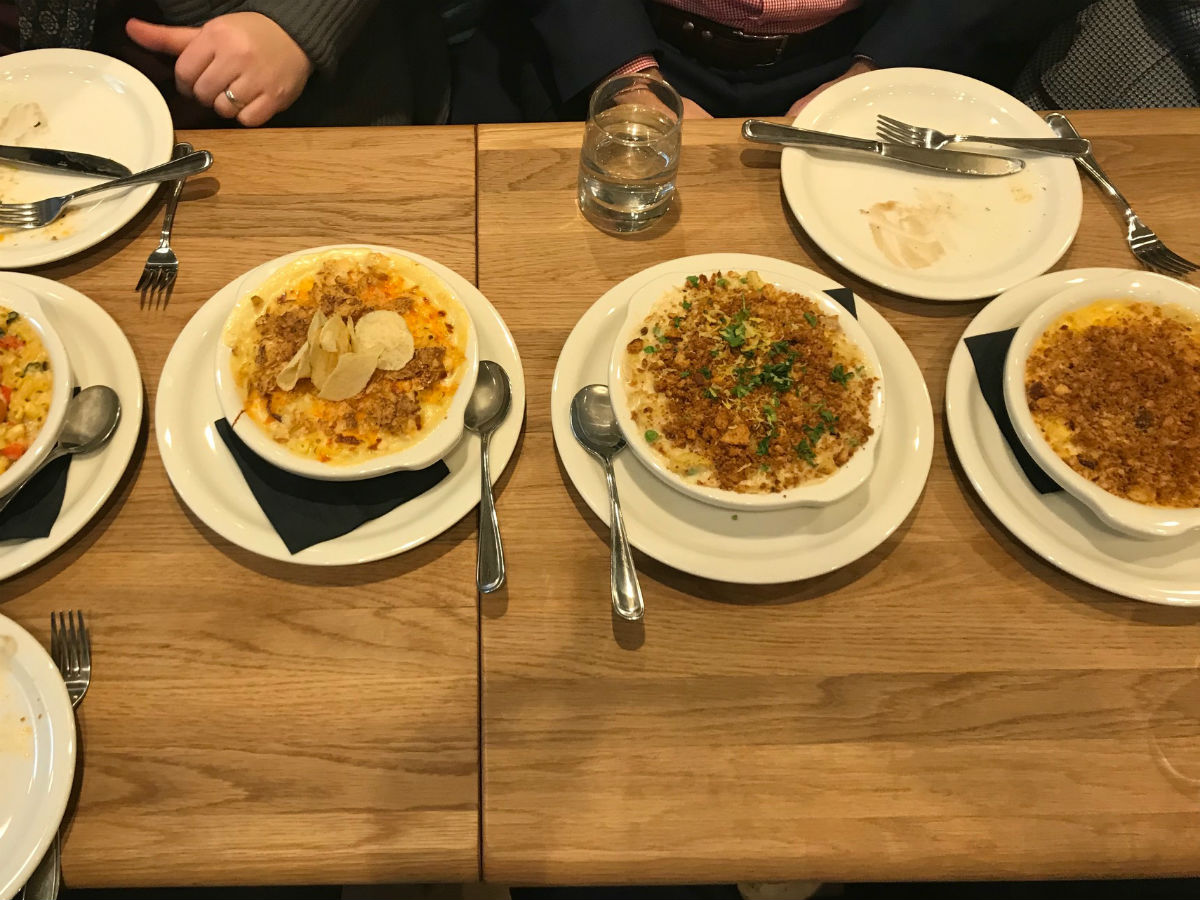 Kevin's is a temple to mac and cheese (PCG)

We need to talk about Kevin’s... that new mac and cheese place

For our  first article of 2018, we highlighted several new and noteworthy Winnipeg restaurants that were just a couple weeks old. And, much like Home Alone, we forgot about Kevin.

And by Kevin, we mean Kevin’s – the new restaurant by Stella’s, where all your mac ‘n cheese dreams can come true.

The place just quietly opened on January 2 at 141 Bannatyne Avenue (a former Boon Burger location, and you can expect some sort of grand opening soon) and its M.O. is all the béchamel, all the time.

There are 11 mac and cheeses on the menu – including one in open-faced sandwich form – along with a number of shareable sides and salads to cut through all that cheese. All the macaroni is local, coming from everyone’s favourite pasta and egg company Nature’s Farm (who also are now making rich bone broths, along with outstanding gluten-free granolas). You’ll also find a few vegan items sprinkled throughout a menu that mainly worships at the altar of dairy.

Before we dig into the food, a little bit on that name.

Unlike what our headline might suggest, it has nothing to do with a haunting and award-winning book about a sociopathic kid (phew!), and instead involves a story that is 1,000 times cuter, about a cat named Kevin who ran away from its owners in Vancouver only to be returned by some nice neighbours. There’s even a painting of this zesty cat on the wall, while you’ll also note that the menu reads that Kevin is “Stella’s cousin on her mother’s side,” which is surely how most cats are related.

Now, about those mac and cheeses and other dishes.

Our Tourism Winnipeg marketing team just took down seven of the 11 at lunch, along with the minty peas ($4), spicy cauliflower bites ($8.95) and vegan sprouts ($7.45), meaning we all feel: a) a sense of accomplishment b) a bit sleepy and c) pretty impressed by this operation.

Starting with the starters, the cauliflower bites were a standout. If you are a vegetarian, these should be your chicken wings – the batter was light and crisp (baked, not fried), while inside the florets were coated in a buffalo sauce that provided a bit of a kick. They were accompanied by ranch dressing (for the full chicken wing effect) which was also a good move. (But on that note: what’s the deal with ranch dressing? We thought 2017 and 2018 were going to be the years of harissa paste, but instead it’s ranch as far as the eye can see… not to say there is anything wrong with that).

The minty peas were served-up simple, tossed in butter with smatterings of mint and cooked to just al dente. The sprouts are also a study in not messing with a good thing. They were halved then seared hard for a nice char that was sweetened by a reduction of apple cider vinaigrette.

The Caprese was a big winner for its use of balsamic reduction, marinara sauce and roasted cherry tomatoes, which all provided the sort of acidity that most homemade mac and cheeses are wanting (tip: when cooking at home, use more Dijon mustard than seems necessary when finishing your roux to add some zing to that cheese sauce). Its sauce also had provolone and mozzarella, making for the classic trail-of-cheese-off-your-serving-spoon you’ll be looking to put up on Instagram.

The Canadiana was my personal favourite. It features bacon, an allusion to 1769’s The Experienced English Housekeeper on the menu, and just enough maple syrup to add an undertone of sweetness. The best part was its topping of salt and vinegar chips, which again added some necessary acidity. (Plus, move over ranch dressing because 2018 will also be the year for chips in everything, particularly Caesar salad (hello Kettle Brand Krinkle Cut Dill Pickle instead of croutons), Asian noodle dishes (Miss Vickie’s Sweet Chili and Sour Cream) and sandwiches (Kettle Brand Honey Dijon for crunch)).

The Hops & Blue features mozza, local brewery Torque’s The Witty Belgian, ground hops, caramelized onion and is topped with a blue cheese gratin. It’s about as luscious as they come – the elbows are pretty much swimming in the sauce – but you can still power through while enjoying all the layers of flavour courtesy of the sweet onion and citrus notes from the beer. It also comes with a pretzel to sop up all that extra sauce. Best of all, despite its name, it’s not too hoppy. (Note: 2018 will also be the year we refuse all double IPAs – because how many times do you really need to drink a beer on Thursday that you can still taste the following Tuesday? Amiright? #sorrybeersnobs).

The el Mejor ($14.25) took a couple first place votes for its overall depth of flavour, which came in the form of smokiness from roasted poblano peppers, chorizo, jack cheese, and dry spice blend that presented just a touch of heat. It’s also served with a lime (hurray for more acidity!) and some cilantro.

All the mac and cheeses are served in ramekins, the majority of which are finished under the broiler so you get those nice bits of browned cheese on the sides (which are every dishwasher’s nightmare). The portions are quite large and the sauces all quite decadent, so should you be dining as a couple you could most likely split one mac and cheese along with a side or two for a meal that won’t make you wish you were wearing sweat pants.

Our favourite dish of the day was the beignets that we finished off our meal with, all thanks to our fun and knowledgeable server who was equally at home sharing cat origin stories (hi Kevin!) and guiding you through the menu. Plus, the ability to sell a final plate full of fried pastries to a lunch table of eight, who were already breathing heavy from seven mac and cheeses and three sides, is just good business.

These beignets (4 for $4.95) had buttery layers like a croissant, were studded with walnuts, and featured a crispy exterior more akin to a flaky Danish than a doughnut. They were covered in a caramel sauce that you were able to continually slop up using your doughy vessel. In other words, fantastic.