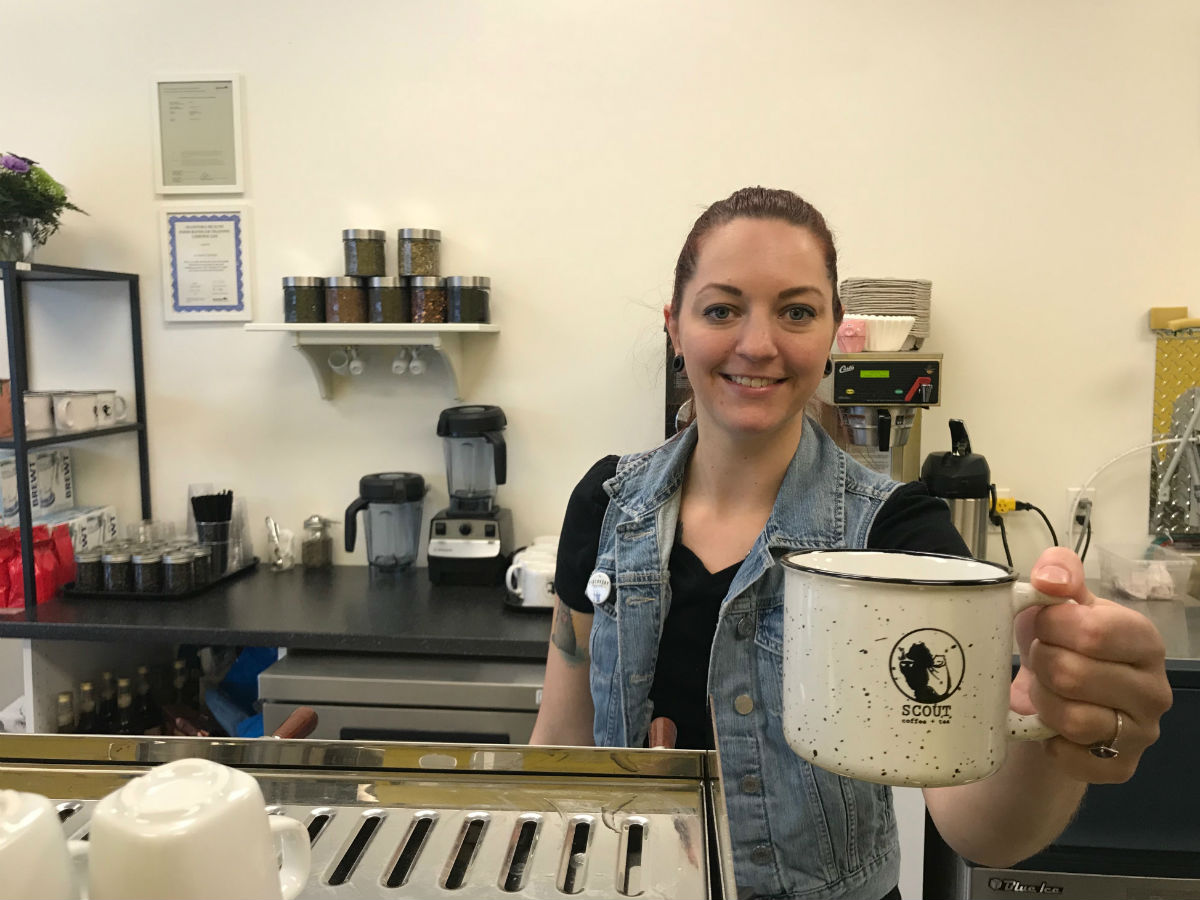 While #adorbs may have been one of the most overused hashtags of 2017, it certainly does apply to Scout: Coffee + Tea (859 Portage Ave.), Winnipeg’s newest café.

Having just visited for the first time, it is clear that moms (and dads) are the word here, as the place was brimming with adorable young families who were sipping lattes in oversized mugs while pint-sized kids played in the woodsy-themed play area.

Indeed, it was my wife, who is currently on mat leave with our five-month-old, who alerted me to the spot. The moms I talked to in Scout had all picked up on the place from other moms and Instagram – which one could say is now the mother of all social media platforms. #momsbetalking

Scout’s owners, Katrina and Phil Tessier, are originally from Winnipeg, but had been living in Victoria, BC for the past four years. They moved here not too long after their daughter Stella was born (the name Scout is also their daughter’s middle name #adorbs), and have modeled the place after a cupcake café in Victoria that Katrina spent a lot of time with Stella in.

“Crumsby’s in Victoria has a similar concept to it… it was just somewhere where you could put your kid down and was the place where the moms all met,” said Tessier. “When I was on maternity leave, I was there all the time, so we thought Winnipeg needs one of these and we then wanted to do it in our own style.”

They just opened on December 1 and already Katrina has found that niche that they were looking to fulfill.

“We’ve already seen a bunch of baby dates with three or four groups of parents coming here and the kids are hanging out together. It’s just so great to see that already happening.”

And why are young families already relishing this place so much? For starters, on the culinary front, they’ve gone full local.

The coffee is from local roaster Black Pearl, the pastries come from La Belle Baguette (the berry croissant I had was masterful; so flaky on the outside that it shimmered like it was glazed, while the inside had countless fluffy, butter layers. They also have a selection of doughnuts from Oh Doughnuts (who gave Scout a shout out on Instagram that got them 300 new followers #community), and salads from Beet Happening (all spots, which you’ll see if you click on the links, we are big fans of).

The design of the space is also super cute, playing off the Scout name to go full boy scout with creating a campground-inspired kid’s play area with mountains, a fireplace (made of plush materials of course) an RV and wood block toys – which a group of two year olds were making great use of when I was there.

I’m personally enamoured with the café’s logo – which features a papa bear sipping from a cup with a cub wrapped on his back, all designed by Katrina’s friend and Kelowna-based designer Melissa Sharpenter.  You can buy the mugs, along with shirts featuring a bear hand holding a coffee cup and other fun locally made dolls and other products too in the café.

Their location in the West End is also a good fit, being close to the majority of their suppliers, and right across the street from Wolseley and Vimy Ridge Memorial Park, which will work out well in the summer with its splash pad and family friendly atmosphere.

“We live in the West End, so that is one of the reasons we wanted to be here,” said Katrina.

“We have friends as well with young kids that live here… and the West End is really growing for young families with housing being affordable. Plus, a lot of these people – along with the ones in Wolseley – are younger families who will maybe go out of their way to support a local business versus going to whatever is most convenient.”