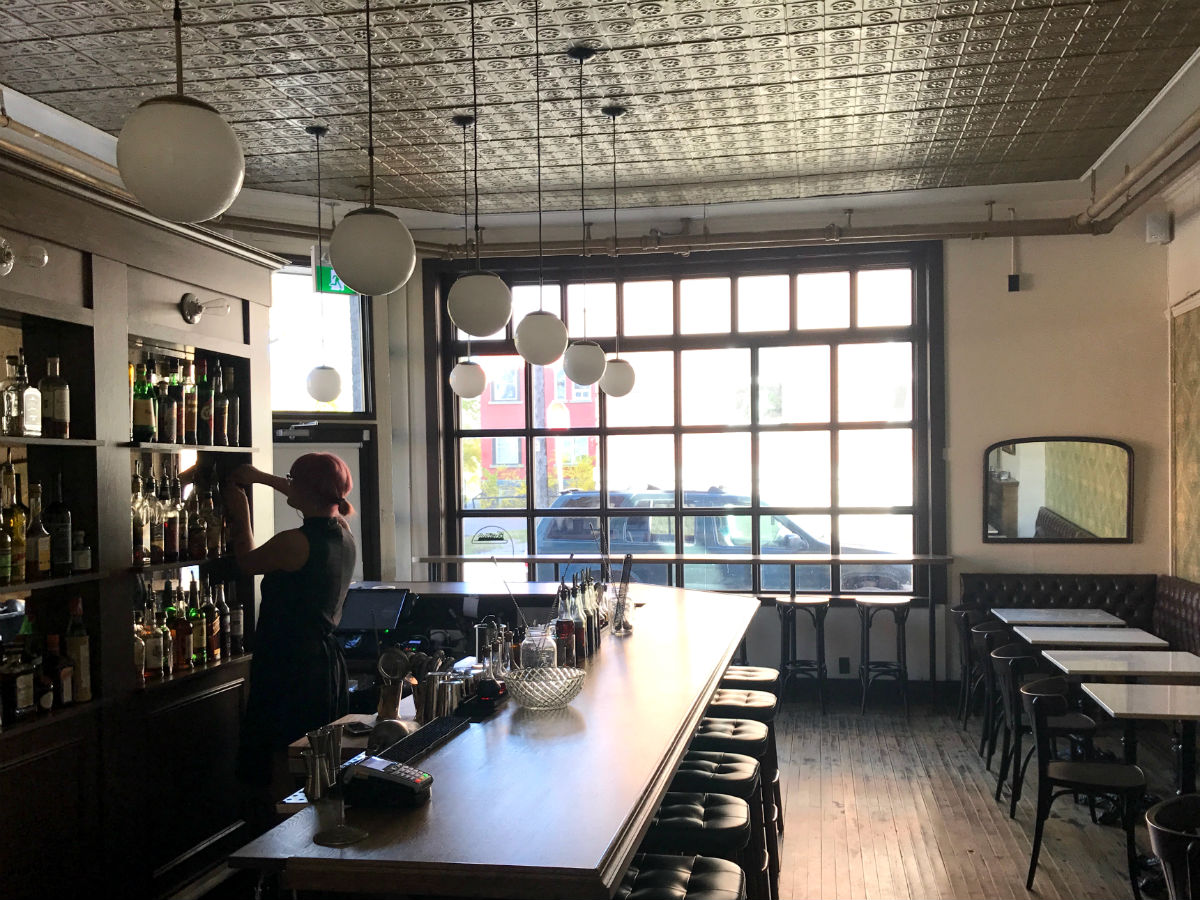 The interior of Langside Grocery (PCG)

The first thing you’ll notice when you walk into Langside Grocery is that the handsome room –  with its tin ceiling, rich brown wood bar with a distressed mirror backsplash and tufted leather banquettes – seems like it has been like this for a century, which is no accident.

“We wanted to make sure the space looks like it was always there,” said co-owner and chef Jason Armstrong.

“When we got the building, we knew we wanted to turn it back into a public space. And for me being a chef, this restaurant was exactly what we wanted to do,” continued Armstrong. “But it took a long time.”

Armstrong has a culinary background that includes being the chef/owner of Bistro 2210 in Calgary for nearly a decade (along with working in several other Cow Town restaurants), while originally did he did his culinary degree here in Winnipeg.

He purchased the circa-1920s space five years ago with his sister Shelley and brother Ryan. Since that time, they’ve been working away on it (Jason and Ryan both have experience restoring old homes and Jason’s wife is an interior designer), while the locally shot CTV television show Sunnyside rented the space to use as the setting for their café, The Dark Roast, a couple years ago. 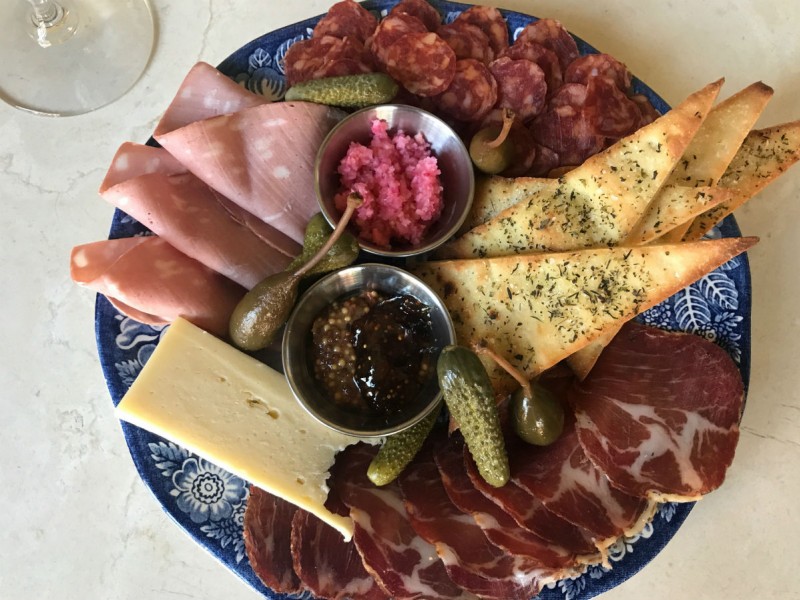 For the last two weeks, it has finally been open to the public as a wine and cocktail bar, serving a tight little menu of French-inspired small plates, charcuterie boards that change weekly, and tarte flambées.

And while Langside Grocery is very much still in its infancy, they already have been packing in crowds, with the bonus being that a good deal of the patrons so far work in the restaurant industry too.

Armstrong has been attributing this instant popularity to word-of-mouth, the fact that the space took so long to come to fruition (as people kept asking about it creating a buzz), Instagram, and the staff in general – all of whom have been on the Winnipeg culinary scene for some time.

The front-of-the-house manager is Winnipeg renaissance man Chris McDonald, whom locals will know from Albert Street Cocktail Bar, Forth, and Bar Italia – where he was for 15 years, along with the furniture store in 84 ½, which McDonald also owns. (As a bonus, McDonald himself is also nearing completion of his masters in interior design and U of M, so, you could say the whole crew is a design savvy bunch).

In the tiny kitchen, along with Armstrong, you have Renée Girard (formerly the café manager of Forth) – whose brother and sister-in-law own Hearts & Roots, the small-scale organic veg and fruit farm in Elie, MB where Langside gets its produce.

Behind the bar there is Nicole Côté (formerly of Albert Street Cocktail Company) and Stefan Braun (formerly of deer + almond) – who came up with their saucy drink names like Elasian Tears (for all you Trekkies). All the drinks are of the craft variety, making use of premium spirits, with fresh-squeezed juices. They are $10-$12 and are at least a double.

“Maybe it has been appealing to industry people because we are coming from that point of view,” said Armstrong.

“When I go out I want to be able to order a really good cocktail, or a good glass of wine or local beer and order some small plates…. After a shift in the kitchen you don’t want to order an entrée. You just want to pick at some quality food.” 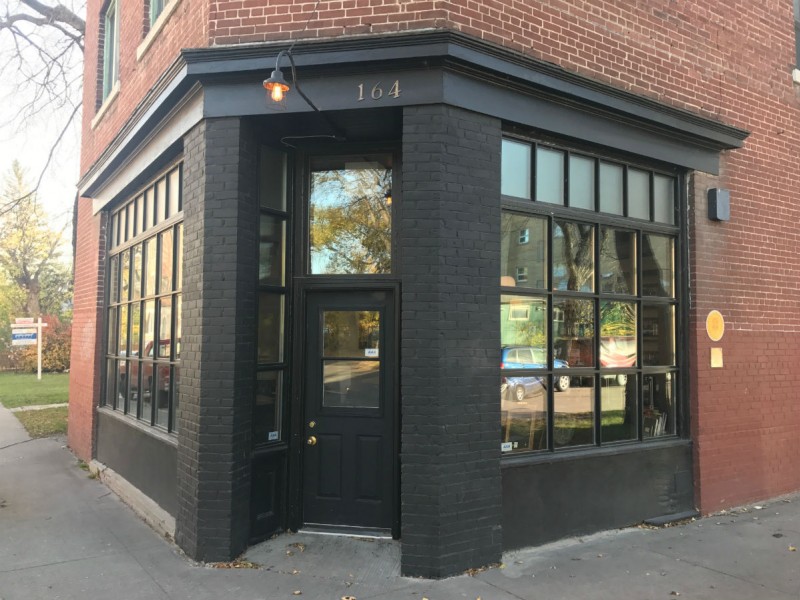 Of course, there’s also the fact that the location itself is mint, tucked into a quiet little street in West Broadway – which one could refer to as Winnipeg’s own little version of Portland, OR or Brooklyn, NY.

Yes, West Broadway can be hipstery (surely you may find yourself seated at Langside next to a fellow with an handlebar moustache that would not have looked out of place when the building's bricks were first laid in the inter-war years), but it’s also a gorgeous little area with old character homes that is just a short jaunt from downtown.

Right now, this corner-straddling room has that neighbourhood haunt feel to it, but don’t be surprised to see it become more of a destination restaurant soon.

Langside Grocery is located at 164 Langside Street and is open Tuesday to Sunday, 4 p.m. to 12 a.m. There are 30 seats, including the bar top, while an outdoor terrace will reopen next spring. No reservations.