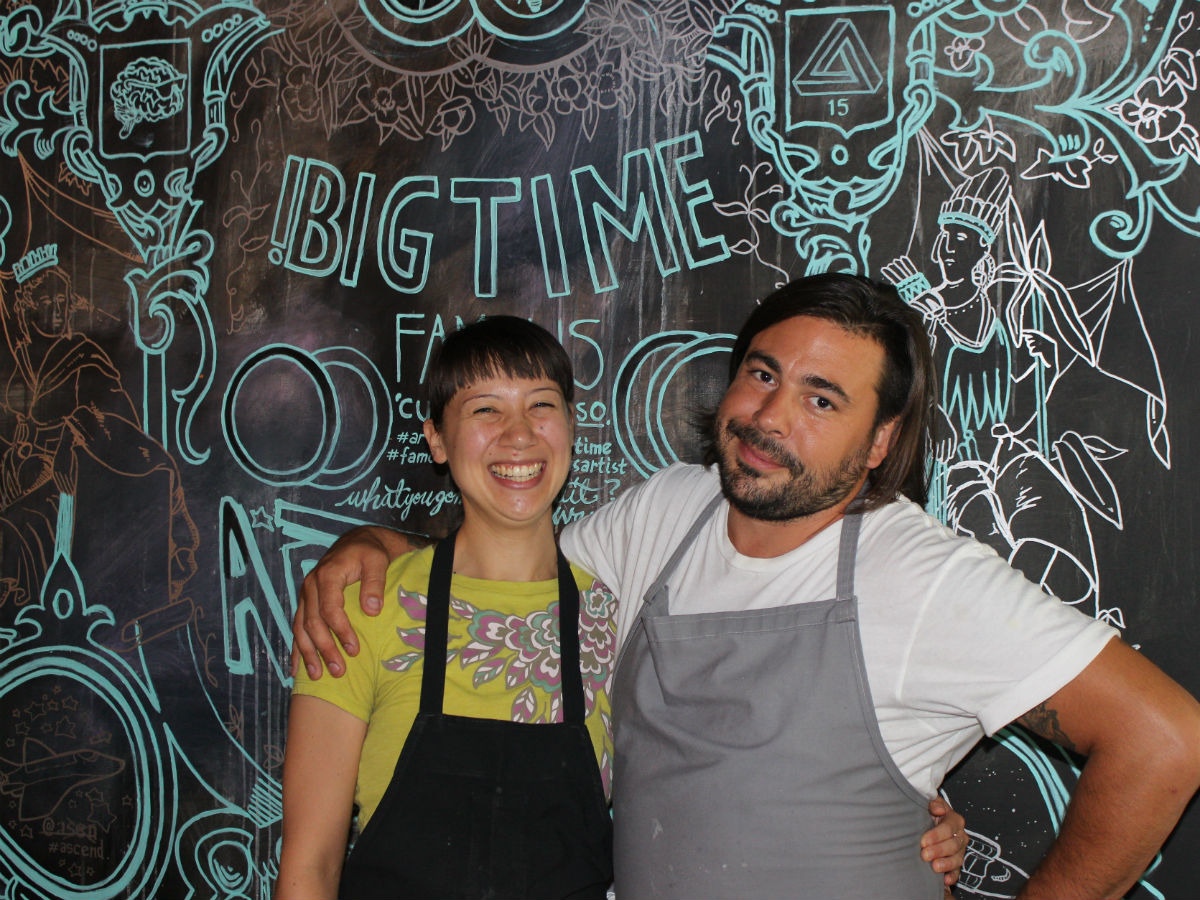 Q & A with Chef Mandel Hitzer of deer + almond

Celebrated Winnipeg chef dishes on the return of RAW:almond, Terroir talks, and where Winnipeg's food scene is at

Ed Sheeran, a famous musician who apparently loves his ketchup, does not need any at  deer + almond.

This weekend he referred to the place as, “a really good restaurant,” before referencing the fried chicken by touching his heart like a footballer after scoring a goal for his boyhood club (the dish was the o.g. free ranged chicken with black vinegar). He concluded  the interview with Ace Burpee with a rave review about the restaurant’s “pudding” (semifreddo) that contained everything he loved.

Sheeran was in town this weekend playing a show at the Bell MTS Place, and he’s not the only musician or celebrity to fawn over the deer. I’ve personally witnessed musician  Dan Mangan during a show at the Burton Cummings Theatre tell the audience how he and the band just had their best meal on tour at d+a, while a host of other celebs like the Barenaked Ladies and Samuel L. Jackson have given their seal of approval.

But don’t just go eat at deer + almond because famous people do. Go eat there because chef/owner Mandel Hitzer and his crew are always doing great things, both culinary wise and for the city itself.

Hitzer, as Winnipeggers well know, is the co-creator (along with architect Joe Kalturnyk) of RAW:almond, the internationally acclaimed and award-winning month-long winter pop-up restaurant that brings some of North America’s best chefs, along with great local ones, to serve a multi-course meal on the frozen Assiniboine River.

He’s also a total dude who makes instantly recognizable food, like those little burgers at lunch that would be perfect at a takeout window (the chicken fried chicken $9 is one of the great handheld food items) and larger plates that are scattered with all manner of local greens served on gorgeous ceramics from Winnipeg’s  mud + stone studio – a great example being the salt and pepper squid.

This just may have been our fav, and an all-Manitoba canapé too! What a great event by @norwestcfc for such a great cause #artofgoodfood

In the past two years, Hitzer has continued to expand his culinary horizons having been invited to attend the MAD Symposium in Copenhagen ( where the world’s leading chefs come together to share ideas), presenting about Manitoba’s culinary scene at the most recent Terroir Symposium (which this past year celebrated Canadian gastronomy), dining at Noma Mexico, along with a slew of culinary collaborations across the Canada and the US – including more coming up for Canada 150.

Below, you’ll find an interview with Hitzer about most of this, along with what’s next for RAW:almond and what he loves and admires right now in Winnipeg.

How did your involvement in both MAD and the Terroir Symposium happen?

[For reference, MAD is, in its own words, “a nonprofit organization that brings together a global cooking community with a social conscience, a sense of curiosity, and an appetite for change.” Chef René Redzepi of Noma (oft-cited as one the world’s best chef, Hitzer also ate at Redzepi’s Noma Mexico this past year) started it as a two-day symposium in 2011 and it has since become the go-to event in the culinary world for sharing ideas. Pretty much, if you’ve binged Netflix’s Chef’s Table, you’d recognize several chefs that have presented there.]

I’ve had the idea of going to MAD for four years, and I just didn’t have the courage to write an application. They stopped ticket sales a while ago, so you have to apply to go and they only accept 300 people… so I just wrote about who I am and what I’ve done and this beautiful story came out of it as to how I love my community, and how we are constantly growing and learning. And above and beyond that I needed to go out into the world to learn more about food and what it feels like to be a food leader in your community. So that’s what MAD ended up being all about – it was a huge networking opportunity.

Because of RAW:almond’s gravity, Arlene Stein, who runs Terroir, had been hearing my name through various circles, and she kind of reached out to me before MAD to see if we could meet up. She lives in Berlin now, and I was going there to visit Cyrus [Smith, Mandel’s good friend and collaborator who is an artist and chef] and the owners of Forth there. After talking she invited me to be a Manitoba ambassador at Terroir and that proved to be a huge, beautiful opportunity.

Thank you @alexatala @hijadesanchez !!! This is such a magical experience!! #MAD5

[pictured here is René Redzepi and  Alex Atala, whom you may have watched on programs like Chef's Table and No Reservations]

Terroir is like the North American version of MAD… and I was able to hang out with some of the best chefs in North America.

What did you present at Terroir?

I was originally asked to talk about what’s happening here in Manitoba and I participated in a panel on farming. It was a good contribution because I’ve been cooking in Winnipeg for 21 years, and some of the relationships I’ve had with farmers have been over a decade. So, there were questions as a chef, or restauranteur, or even as farmer, as to what obstacles you have to go through to keep that relationship going.

What did you say when you were asked about what is going on in Manitoba?

For me, Manitoba is spinning so quickly that it is hard to keep up with it.

There is a huge movement with young entrepreneurs and young chefs taking these little jumps and huge leaps to start doing things for themselves. You’ve got entrepreneurs, like say in our ‘hood Bronuts, King + Bannatyne and Chosabi focusing one thing, and doing that one thing really well. They have all moved away from the massive eclectic gastrodomes model – like the Earls and Moxie’s.

And our growing season is changing rapidly, and we have some huge leaders in the growing community that are making waves. You have Tiffany [Grenkow] from the South Osborne Permaculture Workers' Co-op [which grows urban, chemical-free produce], you have the kids [Justin and Britt] from Hearts & Roots – they don’t just show up at a farmers’ market, they have a created their own brand and a beautiful package for people to enjoy.

What is the most exciting thing happening in Winnipeg?

Well, I gotta’ talk about Scott Bagshaw. I am incredibly proud, not only to call him as a friend or peer, but, I’m proud how he has kind of paved the way for us “young chefs” to really make a go at it for yourself.

He’s doing the dream, and he’s doing it without any hesitation. He doesn’t care what anyone else thinks and he is following his heart. It’s really beautiful to watch: from Deseo on Albert Street, to the move to South Osborne, to Enoteca, Máquè, and soon to The Forks, which is kind of cool going full circle as it all began at Sydney’s. So yeah, I think we all need to stop for a moment and appreciate Scott Bagshaw – it’s really important.

And another cool thing, I don’t think people are talking [enough] about Cho [Venevongsa] from Chosabi. He’s fulfilling a dream of building a franchise and name that can grow outside of Winnipeg. He may have a coast-to-coast vision of world domination and it is exciting to see somebody do that… somebody taking their pride and culture and cuisine and going full force with that is pretty awesome to watch.

What’s next for you?

I have an insane travel schedule right now, which originally wasn’t the plan, as I had hoped to stay at home and be in my restaurant a lot.

Terroir opened up a ton of connections to RAW:almond, and now so many people want to come here.

I’ve been invited to cook in Edmonton for a Canada 150 event with David Leeder in August, so I’ll be meeting a bunch of chefs there. I’ve been invited to cook at Grey Gardens in Kensington Market (Toronto) with Mitchell Bates -- which is just one of the best restaurants in Canada, in my opinion [Bates has been a RAW:almond regular guest chef and owns Grey Gardens with restauranteur Jen Agg].

I have a small trips to Los Angeles, Montreal, New York, and I am going to Tokyo next week to talk about RAW:almond and Manitoba tourism to some embassies there.

So RAW:almond is obviously on again, as you had originally said that it was only going to be for a couple years?

Oh yeah, as we say, we are doing it live. There is no slowing down. It is only going to get better. We are just starting to figure it out.

I want to continue to keep it pretty Canadian, but there is potential talk about some international chefs. The hard part is that I need to physically go to talk to the chefs to invite them – a phone call or email doesn’t work.

Does it get any easier putting RAW on?

It’s so much work. For example, my chef du cuisine Emily Butcher literally has a full-time job of managing chefs and ingredients and organizing them and their lives for a month and a half.

I think last year we had seven chefs overlap, and there are ingredients being flown in from all over the place [a common thing for participating chefs is to bring in products from their respective regions], so you are trying to organize all that on top of running two kitchens, two teams, and still find time to feed yourself and have a glass of water – it is pretty crazy.

What has you excited right now about deer + almond?

Oh man, well we just completed our fifth year of business as of April 16, and it’s kind of funny when I look back thinking that I didn’t even know what I was doing five years ago.

I’d just say check out our current menu, it’s [swear word] amazing, and I love everything on it.

But for sure get the cannelloni. We take a lot of pride in our pasta game and we always have fresh pasta on the menu – because it is the life-giver – and right now the ricotta-filled cannelloni with simple grilled tomatoes, kale, and chili oil is so simple, but so good. 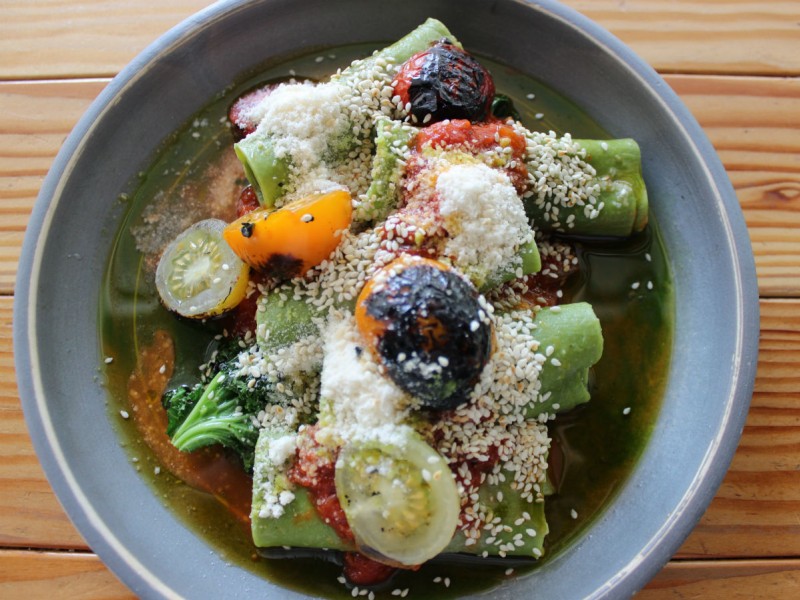