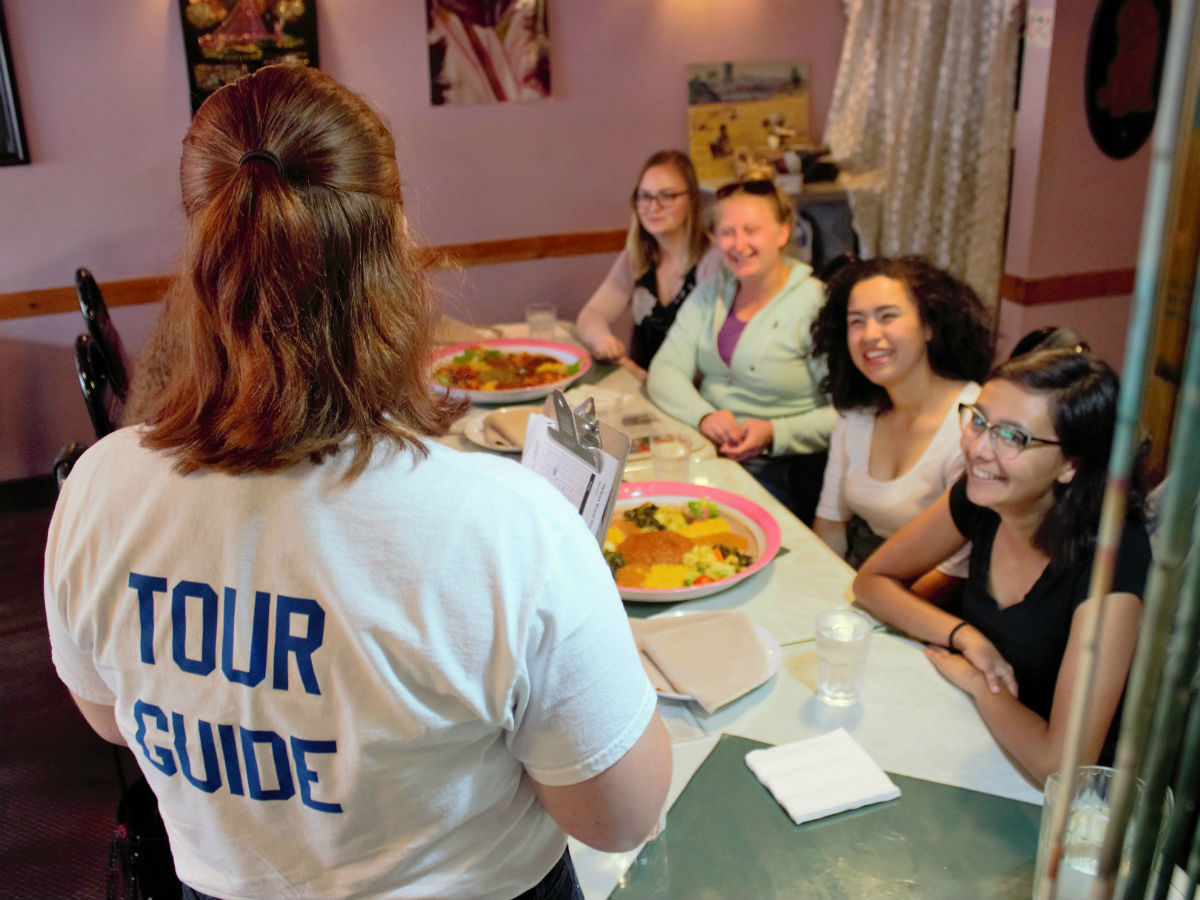 Around the world in 14 plates: Why West End Biz Food Tours are a can't-miss culinary experience

If you are a worldly food lover, you will surely fawn over Winnipeg’s West End.

The area contains approximately 110 restaurants and is the spot in the city to find authentic (and affordable) hole-in-the-wall Vietnamese, Cantonese, Filipino, Portuguese, Ethiopian, Italian and Latin American restaurants.

“Within a five-minute walk of here, you could probably access 40 restaurants, which is phenomenal,” said Joe Kornelsen, the promotion and development coordinator of the West End Biz, while seated at The Original Sorrento’s at 529 Ellice Avenue.

“I live really close to here, and when we renovated our house we were without a kitchen for eight months,” said Kornelsen.  “That never was a problem.”

It’s an area of the city that, while it may not share the architectural grandeur of The Exchange District, surely has just as rich a history, having been incorporated into Winnipeg in 1873.

Most importantly for foodies is the fact that within the last 40 or so years, this area of town has been populated by immigrants from across the globe – seemingly all of whom have interesting stories – who have continued to open up establishments with flavours that will take you back to their homeland, which is exactly what you’ll do on a West End Biz food tour.

These two-and-a-half hour tours run several times per month, starting on a street corner where a knowledgeable guide will take you on a stroll to four unique restaurants that will provide you dishes from around the globe. 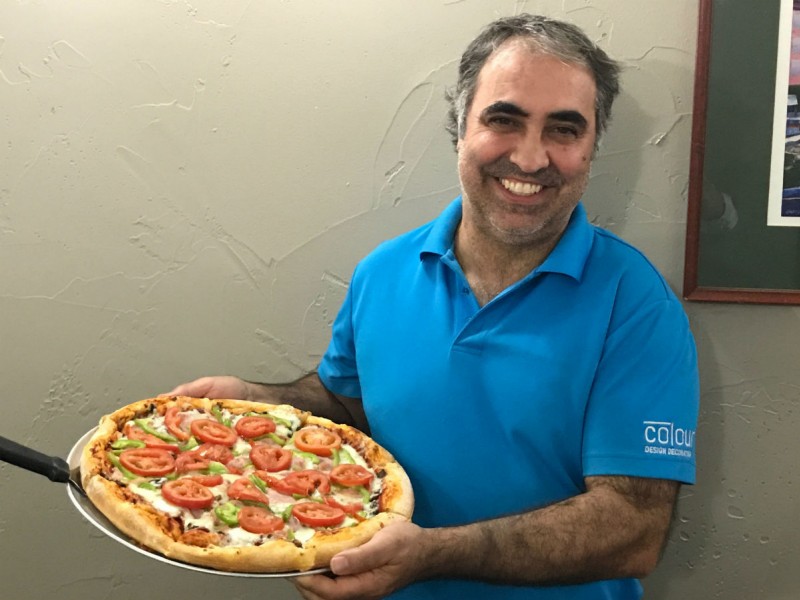 Along with the excellent food, what we loved most was meeting the characters behind each establishment, which started for us at The Original Sorrento’s (529 Ellice Avenue), where ate airy, tasty pizza (which is a staple at our Economic Development Winnipeg staff lunches), and met owner Gerry Lomonaco (a total gem btw), whose brother originally bought this place back in 1985.

Terry started working in this exact room after school when he was 12 years old in 1972, back when it was called Luigi’s – who owned the place along with his wife Anna.

“Luigi was old school,” said Lomonaco. “In Italy, when you want to be a barber, you go work in the barbershop: you first sweep the floors, you do stuff for the barber, and eventually, after a while, the guy will teach you how to cut hair.”

“That was Luigi’s thinking here. I did all the grunt work – eventually I did get to make the dough – but first it was always doing the dishes, and washing the walls, and all this was hard work.”

“At the end of the first weeks, Luigi comes to pay me, and he asks, 'how much do you want?'

“So, I ended up working a few more years.”

Lomonaco is brimming with tales like this, along with one about how the locally famous Sorrento’s salad can now be found at an Italian restaurant in Niagara Falls, Ontario (which surely, he’ll tell you about if you join the food tour on August 16 – or if you stop in before then). 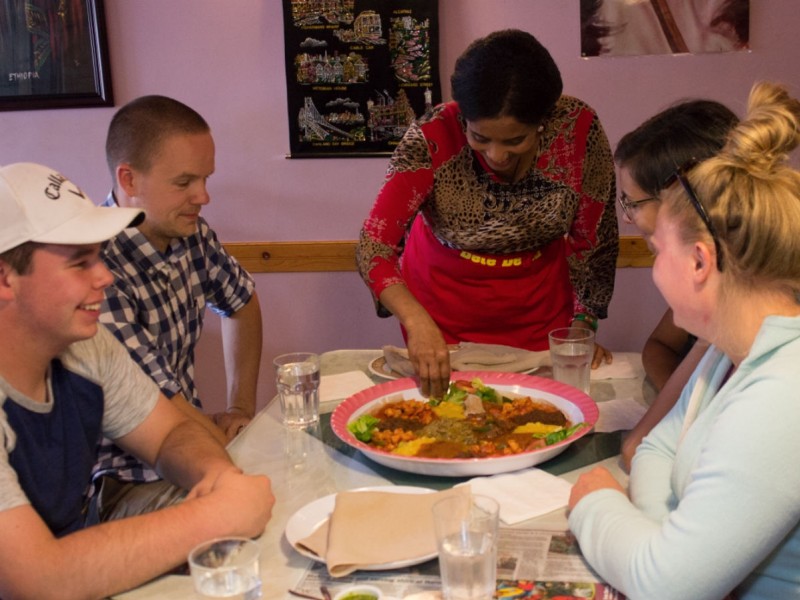 Our next stop was Harman’s Café (570 Sargent Avenue), where chef/owner Desta Worku Negatu served up two huge platters of Ethiopian food (one vegetable, one meat, all of which was gluten free) with plates of thin, spongy injera. Negatu opened this location in 2009, after initially working at the original location on Sherbrook Street at Portage Avenue.

Like many immigrant restaurant owners we’ve talked to over the years (including our next stop at Than Huong), becoming a chef/restaurant owner was never in her original plans when she moved to Winnipeg.

Negatu was born and raised in Ethiopia, and has lived and traveled through Djibouti, Greece, and several other stops, before spending six years living in Italy. From Italy, she made her way to Winnipeg in 2000 to work on her nursing degree at Red River College.

Despite not having any experience in the restaurant business back home, her friends taught her the ropes at the old Harman’s location, before she eventually would make this new location her own – all after spending three years living in Israel in between 2006 and 2009.

She has since made Harman’s one of the city’s best Ethiopian restaurants, a place where you should get a big group together to take in handfuls of stewed, aromatic dishes rich with flavours of onion, garlic and berbere served atop platters that could shelter you from a volley of arrows (with the new Game of Thrones season quickly approaching my mind immediately goes there) all for about $12 per person. 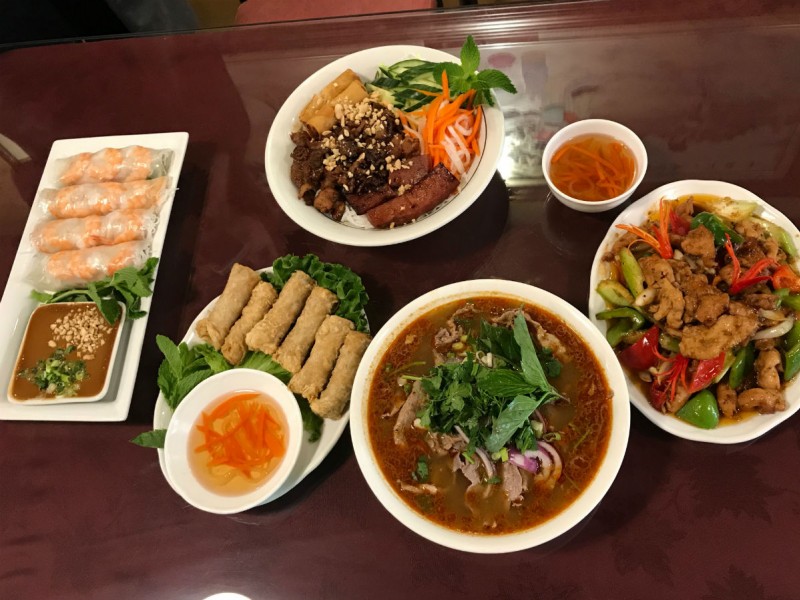 An assortment of dishes from Thanh Huong (PCG)

Our other spot of note was Thanh Huong, Winnipeg’s original Vietnamese restaurant – or so the owners Moc and Thuyen Thai tell me. The Thai’s opened Thanh Huong in December 1987, and can be credited with being originals in a neighbourhood that is now brimming with excellent Vietnamese food. Moc tells me that the majority of the other Vietnamese chefs in the area first came through his kitchen – but that he and Thuyen’s broth is still the best.

At Thanh Huong we had one of my new favourite dishes in the city, the #6 satay beef noodle soup ($10 for a huge bowl that can feed two) that has a terrific broth teeming with herbaceous flavour courtesy of all the Thai basil and cilantro, along with just a bit of heat from the chilies. Thuyen told me she first oven roasts the ginger, anise, cardamom, etc., before the broth simmers overnight for the next day’s service. I have seriously been thinking about it all day.

Some of the other banner dishes we had included super crispy Vietnamese egg rolls; a classic vermicelli with minced and grilled pork dressed in fish sauce, sugar, lime, and chilies; a sticky lemon grass chicken stir fry with chunks of bell peppers; banana-filled spring rolls for dessert (where the banana centre was melted down to release all those caramel flavours) and a lovely flowering tea that was swimming with leaves.

For a complete listing of restaurants in this great neighbourhood click here.