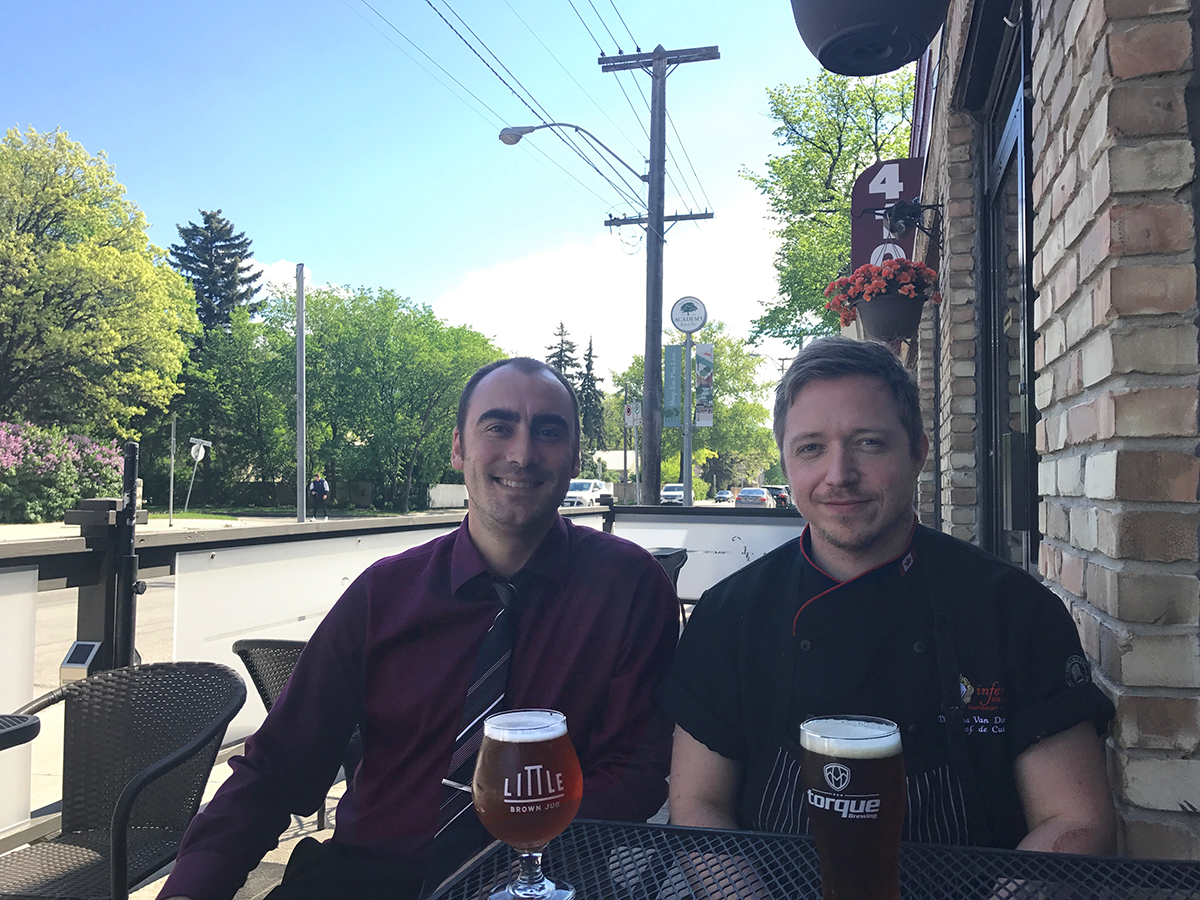 InFerno’s on Academy: a recipe of three generations, thirty years, plus one Dutch chef

Before you dig into a bowl full of mussels at InFerno’s on Academy, followed by the expert move of dumping your fries into the bowl to sop up a cognac green peppercorn cream sauce, you should probably get some appreciation of the evolution of this restaurant.

Its roots run back three generations and three decades, although this location, which opened five years ago and is technically the younger brother location of the original InFerno’s Bistro in St. Boniface, continues to push into new culinary territory via the teamwork of owner Chris Kirouac and his Dutch chef.

InFerno’s on Academy’s head chef Thomas Van Der Krogt was born and raised in Amsterdam. After high school, he did his culinary arts degree and trained as a chef in numerous European hotels before spending three years travelling through the Middle East, further developing his palate before heading back to Europe to work in more kitchens. 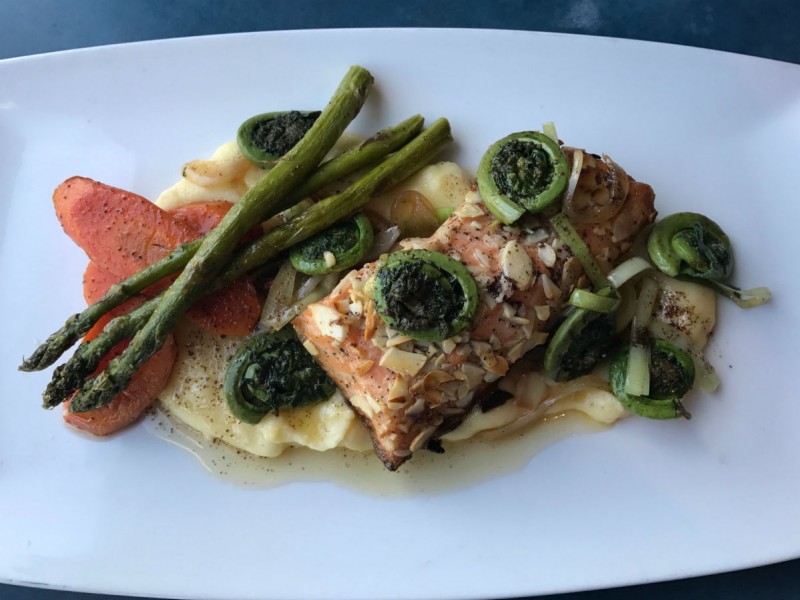 These experiences have helped shaped his cooking style, which he describes as “Mediterranean with Middle Eastern influence.” He has begun to implement this into Inferno’s on Academy’s weekly features, like the (pictured above) almond crusted, pan-seared salmon over creamy polenta with sautéed leeks, and local fiddleheads and asparagus.

It’s a great dish. The salmon is served medium rare, the oh-so-buttery polenta adds a base and texture contrast for the light crunch of the fiddle heads and asparagus, while the maple beurre blanc brings some sweetness and acidity to the plate. (PSA: It will pair well with Winnipeg’s Little Brown Jug, which is now on tap along with several other great selections from local breweries like Torque and Half Pints).

“I’m pretty hands-on… I do most of the prep for my specials and I’m somewhat of a control freak, so it can be hard to pass things on to other people,” said Der Krogt. He continued that this is what it was like with the chefs he used to work with in Europe, including one 65-year-old boss who still worked pans on the line during dinner service.

This approach is something that Kirouac immediately admired after hiring Der Krogt, noting that this is the way his family has always done things.

“I appreciate that, because my dad has been cooking since he was 13, and he is always a hands-on guy in the kitchen doing four things at once and is just go, go go,” said Kirouac. “So, when we found him [chef Der Krogt], and he was showing so much dedication to the place, we just knew it was going to work.” 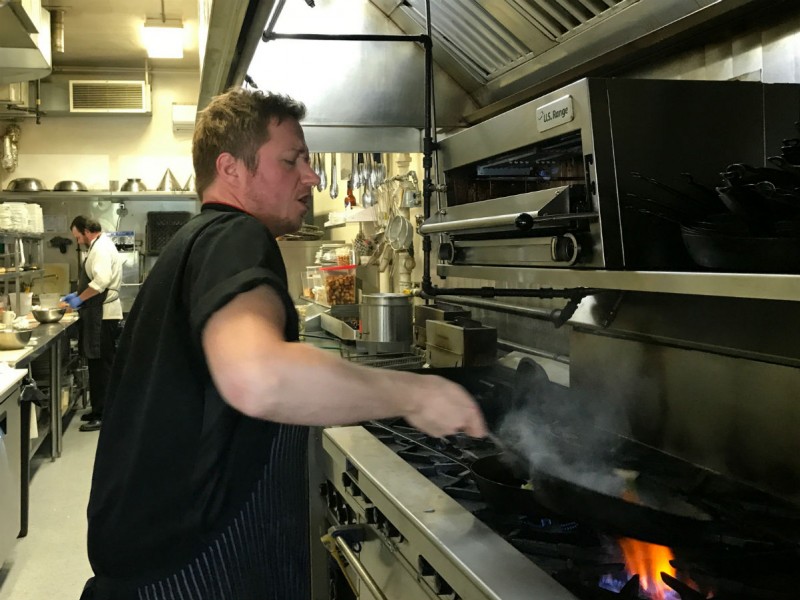 Inferno’s owner Chris Kirouac is a third-generation restauranteur. His grandfather, Fern Kirouac Sr., was a classically trained French chef who moved from Montreal to Winnipeg after being recruited to be the chef at the International Inn.

During his time at the Inn, Fern Sr. became the co-star of a CBC Television cooking show called the Charcoal Chefs, which aired for three seasons from 1976-78. He also developed and sold his own seasonings and would go on to open two successful restaurants in the 70s and 80s, The Red Lantern and La Vielle Gare.

Chris’ dad, Fern Kirouac Jr. followed in his father’s footsteps, starting first in his early teens at the International Inn. He then worked at The Red Lantern (which they would later sell) before they bought La Vielle Gare – a complete family affair where Fern Jr. was the chef and Chris’ aunt and grandma also worked. (Chris’ aunt would later buy the restaurant and rename it Resto Gare.)

In 2003, Fern Jr. would go on to open up his own unique restaurant called InFerno’s Bistro, which eventually brought Chris into the family restaurant fold as a manager. (Chris jokes that his attempt at becoming a third-generation chef was short lived after his dad kicked him off the line for burning some dishes. Plus, he quickly realized he was much better suited to run the front of the house where he could schmooze with customers).

In 2012, the family was offered this large space on Academy that seats 90 in the dining room and has a patio for 24 people. They eventually took over the space next door too, where they created a private dining room/event space that holds 60.

“When we opened up this place we tried to find the favourites [from the original InFerno’s Bistro] while coming up with new creations,” said Kirouac.

“For instance, the pasta InFerno you could never take off the menu. It is ridiculously good and we have customers who come in once a week for it… but we decided to take it to a new level with chorizo, which when you cook it altogether changes the whole character of the dish.” 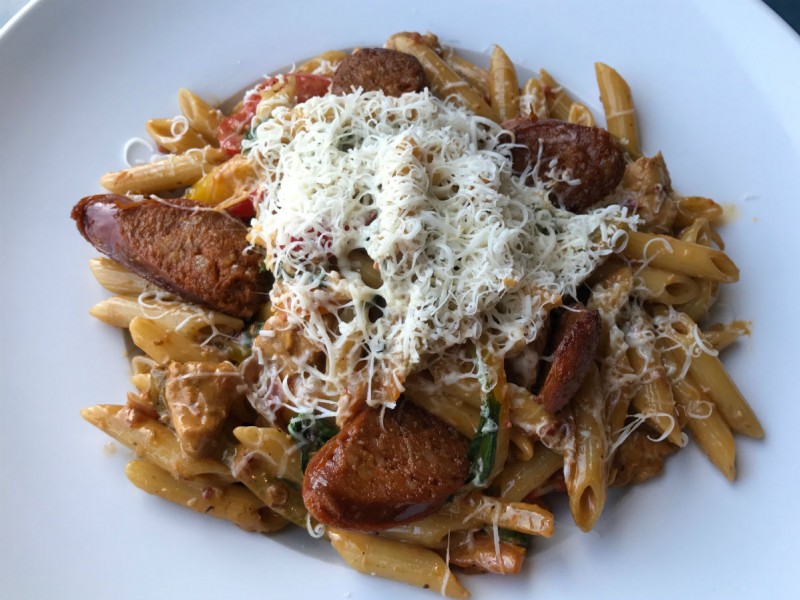 The other popular dishes that have always been mainstays are the lobster pot stickers and moule frites – which has been an InFerno’s staple for over 14 years. Thursday nights are mussel nights at InFerno’s on Academy where you can get a pound of them with fries for $15.50 with the choice of up to 10 different sauces. These nights prove so popular that they often will go through 70 to 80 lbs. during service.

Other popular nights are Tuesdays and Fridays, when your meal often includes live entertainment from local singer/songwriters and jazz musicians.

Reservations are strongly recommended for dinner, although Kirouac jokes that as long as you are not wanting between 6:30 and 7 p.m. (which is apparently the witching hour for River Heights reso requests) you should be all good.

One final tidbit is on wine. Above and beyond the regular wine list, the Kirouac family has developed a good relationship with Okanagan wine maker Howard Soon, who, before he became one of Canada’s great winemakers, once worked in Winnipeg as a Labatt rep. On that note, InFerno’s Academy frequently has hard to get a hold of vintages from Soon’s Sandhill small lots program. So, if you are looking for an ideal pairing for, say, a braised lamb shank, ask Chris if he has a bottle of Canada’s only Barabera kicking around.