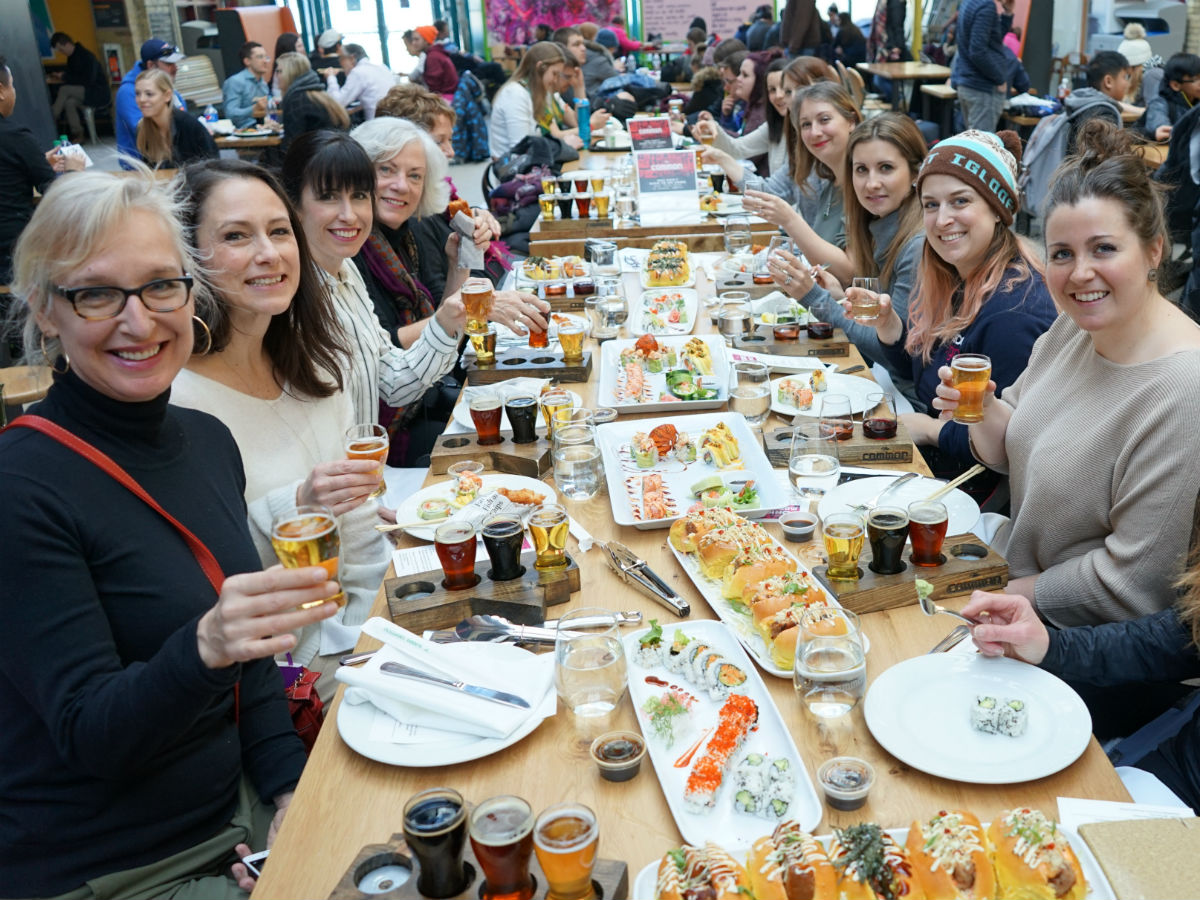 Peg City Grub's guide to dining at The Forks Market

When it comes to food, wine and beer, if you can’t find it in The Forks Market, it’s probably not worth seeking out.

Over $2.8 million has been invested toward

Last June, they opened The Common –  a wine and beer kiosk that is an original in Canada. The bar that now overlooks the main part of the market features 20 curated wines and beers on tap (served up by some really nice, fashionable and informative staff), so craft beer enthusiasts and oenophiles will have no trouble finding the perfect pairing for their food.

Plus, all the public areas on the first floor of the market are covered under one liquor licence, meaning you can walk around with a glass in hand while you do some shopping and socialize. (You can read more about all that here.)

On top of that, they have opened brand new food kiosks from some of Winnipeg’s best restaurants while more are still to come –  including a café counter by Fools and Horses, crazy good pizza from one of Winnipeg’s best food trucks, and a mini restaurant by arguably the city’s most-acclaimed chef. And, they’ve done all of this while still keeping veteran food kiosks – who have always been making lunch lines – in play.

So without further ado, here is our (alphabetical) guide to dining in The Forks Market:

Baba’s Tall Grass Pantry – Another fantastic member of the Tall Grass Prairie team, this Ukrainian/Eastern European stall serves up some excellent perogies, fantastic farmer’s sausage (that contains no nitrates and has a wonderful crumbly texture) along with a host of Slavic staples like cabbage rolls and borscht. Plus, Tall Grass is known for its ardent dedication to supporting local farmers at a fair price while also using natural, organic ingredients.

Bindy’s Caribbean Delights – If you are craving a flavourful roti bigger than a CFL football (which, ironically makes it an American-size portion, although our (foot)balls are bigger) look no further. They make their own chapati (that’s another name for the roti shell), their tamarind sauce is nice and tangy, while you could describe their pepper sauce (which you can buy by the jar) as “sweet mercy that is spicy” (so get the pineapple chow with it for a crunchy cool down condiment). With all the curried potato and chickpea items Bindy’s is a great choice for vegans, while it’s also one of a few places in the city where you can get a nice goat curry.

Danny’s All Day Breakfast – The wily veteran of The Forks Market, Danny’s has been doing breakfast since 1989 using fresh farm-to-market Manitoba ingredients. The breakfast special, which gets you the classics –  two eggs, hashbrowns, toast, and a choice of bacon, sausage or ham – is just $5 before 11 a.m., while the extensive menu has a little bit of everything, including seven flavours of pancakes, four types of crêpes, breakfast burritos, salads, sandwiches and hashbrown poutines. Full menu here.

Dragon Express – Popular Chinese buffet-style kiosk with Western-Chinese staples like chicken balls, Singapore chow mein, and char sui. Their salad rolls are a refreshing option, while they also do up multiple flavours of bubble tea.

Empanada’s and Company by Simon’s Cuisine – Winnipeg empanada fans were distraught when José Sturym – who moved to Winnipeg from Argentina – closed he and wife Clara’s Argentinian restaurant Simon’s Cuisine a few years back. Fortunately, they soon reappeared in the Forks Market, with a menu featuring those same empanadas (the spicy beef, spinach and ricotta, and blue cheese/mozzarella/fig versions are killer) along with some great new dishes like a lemon chicken served with a side salad that is ideal for customers looking for something gluten free. I elect to go for the baked empanadas (the dough is still super crispy and not greasy) while there’s now a selection of great sauces for dunking, with the chimichurri being the staple. They also do chimichurri fries that are totally boss and go great with a hoppy local beer from The Common. Full menu here.

Fergie’s Fish n’ Chips – At Fergie’s the batter is as crisp as the night air in November, while the steamed fish inside is as moist as spring in Vancouver. This institution has been open in the market since 2004, with lunch time lines a given due to crisp chips (made of local russet Burbank potatoes) tangy, creamy tartar sauce, and a pretty fine cream-based chowder to boot. You can also buy fresh and frozen fish from the adjacent seafood counter.

Some of the best fish'n chips I've had, oddly enough, here at the @theforkswinnipeg. #onlyinthepeg

Fusian Sushi – Retired Winnipeg Free Press food critic Marion Warhaft gave Fusian Experience five-stars (and she was never one to hand out stars all willy nilly), so you can expect its spin-off kiosk at the Forks to be of a very high standard too – which it is. Like its flagship on Academy Road, Fusian Sushi has some great izakaya-style dishes, particularly the takoyaki which has that ideal trifecta: a crunchy crust, creamy interior, and smoky, slightly chewy octopus in the centre. Other standout dishes include the poke-style nachos, sushi tacos and a creamy lobster roll surrounded by thinly sliced avocado that is incredibly luxurious.

KYU Grill – The two-time winners of ManyFest’s Food Truck Wars (people’s choice, 2015 and 2016) and owners of the excellent izakaya/ramen shop KYU Bistro, have brought their Heroshimas to the market, and what a good move that was. These hotdog-like creations (if you want to be fancy you can refer to them as robata sandwiches) are saucy numbers, brimming with accoutrements like nori, fried panko, scallions, mango sauce, kewpie mayo and other salty/sweet things. There are six bases to choose from, including pork belly, chicken and tofu, while they also serve Japanese curries, an indulgent spicy pulled pork poutine on fat crispy fries, udon bowls, and some really tasty sides that you can add as part of a combo.

Neon Cone – Beer and wine flights from The Common have proved very popular, as surely will the new ICE CREAM FLIGHTS being offered by this ice cream kiosk (#CAPSFORKIDS). For 20 years, Neon has been serving up hard and soft serve in the market, while these days they are making some Manitoba-inspired flavours (yes, they make their own ice cream) like maple whisky butter pecan (dear god) and local honey + lavender. They also have a build-your-own ice cream sandwich station, with cookies made by local producer Cookie Girl, where you could create a work of art like vanilla ice cream between two salted caramel cookies. Shut up and take my money indeed.

Nuburger – The busiest kiosk in the market is the third location of Winnipeg’s acclaimed free-range, grass-fed burger chain. The Nuburger peeps have won Le Burger Week every year it has been held in Winnipeg, and at The Forks’ location you can get the same massive variety of beef, chicken and veggie burgers (including Le Burger Week winners the Shang-Awesome, Summer Breeze, and The Stamos) that are piled high with great ingredients like grilled pineapple, all manner of aioli, and local cheeses from Bothwell.

It's another Sunday - bun day, but we've got a new kind of @ilovenuburger bun on our minds Get 'em while their fresh + stay tuned for a cool announcement! #ForksFoodie #MeetMeAtTheForks #pegcitygrub #exploremb

Skinner’s – The original Skinner’s opened in Lockport MB in 1929, making this hot dog business most likely the oldest one in Canada. Its Forks location (which is the third Skinner’s in the province) continues to be one of the most popular kiosks in the market, with families and kids queuing for their dogs, burgers, and fries.

Tall Grass Prairie – We could write a book on just how awesome Tall Grass Prairie is. The face of the operation is Tabitha Langel, who founded the business with her husband Paul, and Lyle and Kathy Barkman back in 1990 at their original (and still operating) location in Wolseley. She’s like the poet warrior of locally sourced organic wheat, is incredibly knowledgeable about food production and supporting farmers, and is simply one of the best people to talk to in Winnipeg. Tall Grass now has over 60 employees, including head baker Loïc Perrot, a fifth-generation baker from Brittany who joined the team in 2005. Perrot is now also a co-owner and his seasonal specialties, like the Galette des Rois (king's cake) he makes in January are divine.

our #wolseley location is closed on Sunday, but we have you covered at #theforks. Try one of our newer weekend specials, cinno-croissants. Flakey AND chewy. What more could you ask for?

At their Forks location (which opened in 2002), they mill their own flour on-site (you can see the silo right in the market), using primarily heritage varieties like Red Fife and spelt. Everything they do, they do well; regulars and new customers alike flock to purchase a massive selection of breads, pastries, cookies, muffins and pies – the ingredients of which are mainly meticulously sourced here in Manitoba. They even cold-press their own sunflower oil at The Forks, which you can buy at their Tall Grass Pantry store. Of special note is their new(ish) cinnamon bun/croissant hybrids, which are so flaky, sticky and indulgent. The last travel writer I brought to the shop ended up buying a dozen, after trying one, so she could bring them back to Toronto.

Taste of Sri Lanka – A staple in the market, Taste of Sri Lanka serves up numerous flavourful curries, including a great deal of vegetarian options. Along with their buffet-style items, they also have a great grab-and-go selection of roti-wrapped pockets, with fillings like butter chicken that are ideal if you are looking to have a picnic out on The Forks’ expansive grounds. The housemade hot sauce – which has just a touch of heat with a nice layer of sweetness – is always a winner, while the owners are so kind and informative you’ll want to hug it out when you order.

Zorba’s – Anthony Quinn would approve of this kiosk that has been serving up Mediterranean fare in the Forks for over a quarter of a century (if you need context on this great reference click here). The Greek and Italian recipes have been passed down from Jim Iliopouls, who moved to Canada from Greece in 1957, to his daughter Penny. While there are plenty of options to carb up on, my jam is the chicken souvlaki – which they get a nice char on via the grill – along with some Greek potatoes dipped in tzatziki. Full menu here.