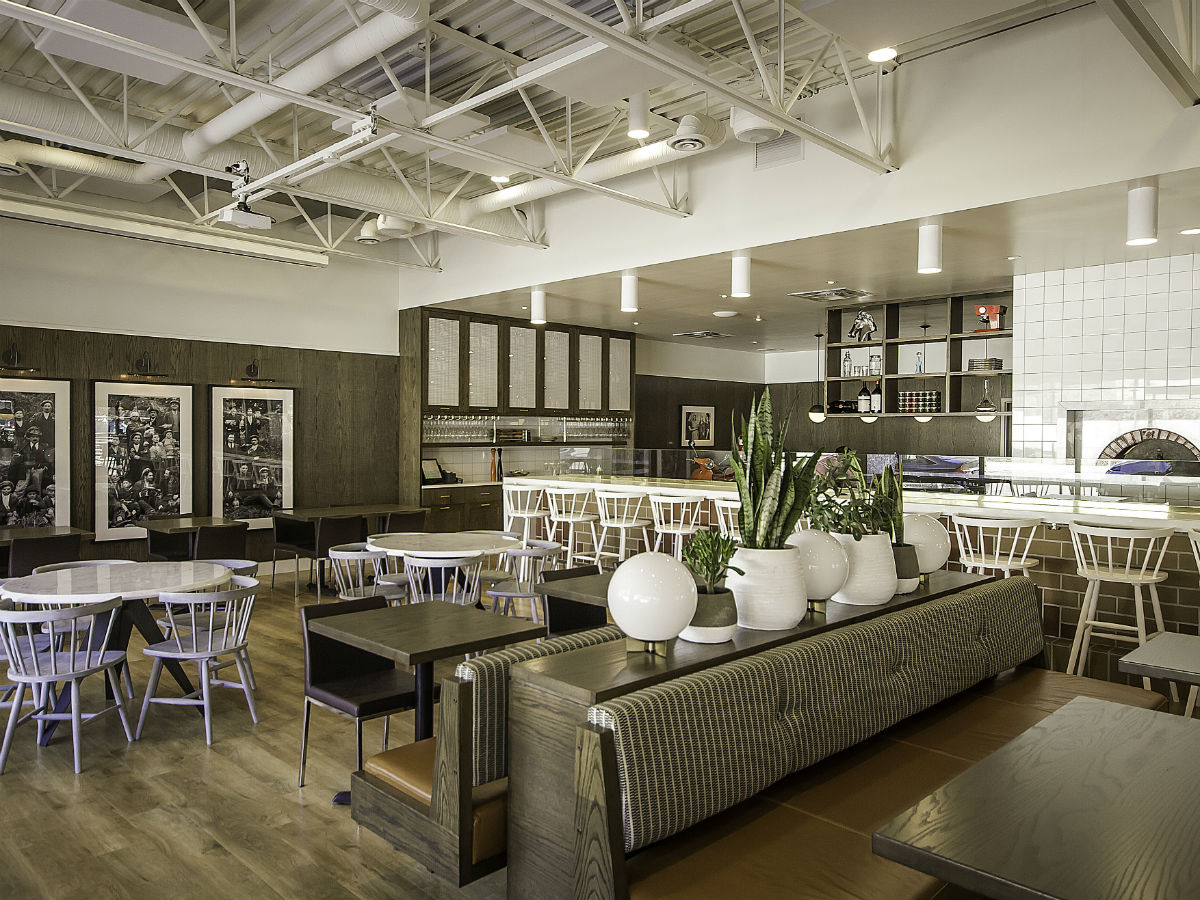 New & Notable: Spring food events and one of Winnipeg’s best gets bigger and better

Just as spring is springing (I now have grass in my back yard; it is grass covered in snow moulds, but it is grass nonetheless), so is Winnipeg’s culinary scene with some fun food events and other tasty numbers that are so much more appealing than the current state of my lawn.

So without further ado, here are just a few events and new happenings we’ve found that will see you celebrating spring with some tasty times indeed.

The newly renovated and expanded Pizzeria Gusto (404 Academy Road) is so good looking that all the peeps are swiping right with it (my single friends tell me this is a Tinder joke).

Anyway, the popular River Heights restaurant, which has been wooing diners since 2008 (and is a popular destination for visiting celebs and Winnipeg Jets) can now seat 100 people in the dining room, while there is a new private room that can seat 14, located just off the main dining room so you still feel part of the ambiance. The design is by Calgary’s Frank Architecture – a firm that has designed some of that city’s best and most-beautiful restaurants, including Pigeonhole and Model Milk – while Winnipeg’s BLDG Architecture Office Inc was also involved.

They just re-opened the space to the public on Tuesday, April 4, and they have a new menu to boot under Gold Medal Plates Winnipeg champion (2016) chef Jesse Friesen, who took over the kitchen at Gusto last May. Of particular note are the sausage-stuffed calamari, a lavish lobster risotto, and a new craft cocktail list (before it had just been wine, beer, apéritifs and digestifs). They have also expanded the wine list, with some great numbers under $45; a new lunch menu will be coming out soon; and they are going to start serving coffees and pastries in the morning for a more Italian café feel.

Pop-up at The Forks’ Food Hall - (Sorry, this is now SOLD OUT)

MasterChef Canada Season 3 runner-up Jeremy Senaris (yeah, he’s okay, but I hear the local guy who finished 5th on MCC’s inaugural season is the bomb) is teaming up with Calvin Truong and his crew at KYU Grill for what will be the first pop-up diner experience inside The Forks’ stunning new Food Hall.

It will be the second in Senaris’ “LASA Series” (lasa is taste in Tagalog) – the first was held at The Merchant Kitchen and sold-out fast – and is being held on May 7th. For $80 you get six courses. You can get your tickets by contacting directly via email either Jeremy Senaris: chefjeremysenaris@gmail.com or Kyu Grill: kyugrill@gmail.com.

In my element and focused @redphotoco caught #theartofplating in full effect! Such a great shot. Plating up my tokwat baboy 2.0 (pork & tofu). #filipinofoodmovement

Speaking of pop-ups and food events… Little Brown Jug, one of the city’s newest and best breweries (read more about it here), has two upcoming events that you will want to attend.

The first is their official Grand Opening on April 23rd, the format of which is a neighbourhood restaurant potluck – because the Exchange District Biz is that rad.

It is going to be hosted/catered by The King’s Head Pub, King + Bannatyne, Peasant Cookery, Yellow Dog Tavern, The Merchant Kitchen and The Cheesemongers (whose Ibérico is a work of art). DJ Hunnicut will be spinning, local band Kennaston will be playing, and that party will move over to the King’s Head at 11 p.m. so you can party extra hard. It all starts at 5 p.m. Here’s the FB event page for your reference.

April 29th We are proud to announce that Chef Ben Kramer will be hosting a five course dinner here at Little Brown Jug. Head to www.chefbenkramer.com for tickets and details.

The other one involves chef Ben Kramer, Winnipeg’s pop-up master/farm-to-table stud who is collaborating with LBJ on Saturday, April 29th from 6:30 p.m. to 9:30 p.m. for three of his four favourite things – FOOD. BEER. RAP (which is the name of the event. I’m pretty sure his fourth favourite thing is Dancing Noodle).

The format will be a five-course dinner, with a few communal growlers of LBJ’s 1919 Belgian Pale Ale to start (which is great food-pairing beer by the way), followed by a cash bar. DJ Hunnicut will also be spinning at this one, and tickets are available here for $75.

On Monday, April 17 from 6 p.m. to 8:30 p.m. The Fairmont Winnipeg is the place to be for one of the best platforms for tasting dishes from Winnipeg’s best chefs – and all for a great cause to boot.

Forty chefs, restaurateurs and beverage companies will be serving up food and drink, with proceeds going to Share our Strength Winnipeg – a non-profit whose mandate is “working to end childhood hunger, providing healthy breakfast and lunch programs and nutritional education to those who need it most in our community.”

Tickets for this great cause and culinary showcase can be purchased at The Fairmont Winnipeg (2 Lombard Place) while you can also contact Eric Schon to reserve tickets via email: 451schon@gmail.com

Leading up to the 16th annual Winnipeg Wine Festival (April 30 to May 6, link here) Chef Wayne Martin and Capital Grill will be hosting two events that are sure to please all those oenophiles out there. (We went to one of chef Wayne’s collaborations last year with Oliver B.C.’s Hester Creek winery and the food pairings were off the charts, particularly the pan seared Haida Gwaii halibut with coconut English Pea sauce that went with Hester Creek’s rosé cab franc).

On May 4, Capital is headed east with a seven-course dinner pairing with Nova Scotia’s Benjamin Bridge winery. It will be a real taste of the terroir, as all the vegetables, fish and seafood are coming directly from Nova Scotia for this party. They are only looking to sell tables to groups of 6 to 8 for this one, and tickets are $165 per person (plus 15% gratuity and taxes) and can be purchased by calling Shan Shuwera at the restaurant directly at 204.295.2377.

Nice looking bunch. Our new releases are here! Available online or at our tasting room now AND arriving at fine retailers and restaurants as we speak. Hop onto our website for more info and to learn how to receive 10% off your purchase! [Link in profile.] . . . #bcwine #pioneerwineclub #kelowna #explorebcwine #cdnwine #wine #tantaluswine #okanaganwine #riesling #rosé #Chardonnay #bubbly

Then, on Friday May 5 beginning at noon, Capital will be hosting Tantalus Vineyards and Culmina Family Estate Winery from the Okanagan. Chef Wayne will prepare four courses to pair with two reds and two whites for this one, while

Don and Elaine Triggs of Culmina (who are both originally from Manitoba) will be attending. The ticket price for this one is $90 plus tax – with $10 from each ticket being donated to the Special Olympics – and can be purchased on the Winnipeg Wine Festival website.

The return of Food Trucks and North America’s only restaurant on a bridge!

Nothing says spring has sprung like al fresco lunches from a food truck. As of this week, the Poutine King and Habanero Sombrero have been seen serving folks downtown, while I’ve been seeing on Twitter that a bunch of the other trucks are going to start their operations in the next few weeks – take that winter, you son of a gun!

So on that note, I’m working on our new 2017 Food Truck Guide for an April/early May release (which will be the earliest one yet!). If you have a food truck that is new to the city, or one that somehow we missed out on this one please shoot me an email at mike@tourismwinnipeg.com and I’ll be sure to include you in the upcoming guide.

As well, Mon Ami Louis, the restaurant located on the Esplanade Riel featuring fabulous French food by chef Luc Jean, will open again for the season on April 28. They are taking reservations now at 204.938.2226.