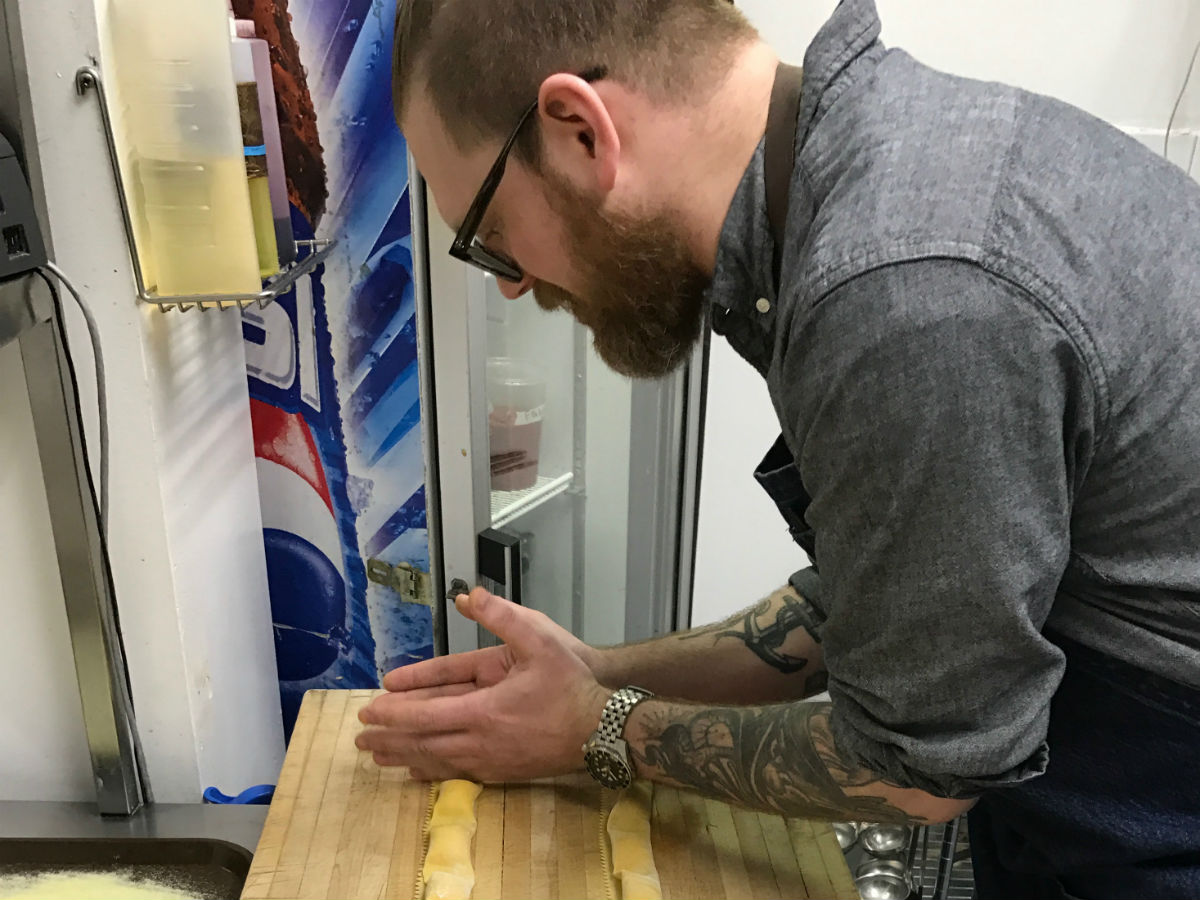 “The best pasta I’ve had outside of Italy” was the caption Karen Burns Booth, an award-winning, Europe-based British travel writer attached to her picture of the Mitchell Block’s rigatoni a few weeks ago.

A couple weeks after that, chef/owner Sean McKay and his crew took 1st place (Judge’s Choice) at the Rendez-vous des chefs – Festival du Voyageur’s annual pea soup contest. They took the title with an outrageously good soup that featured freshly made pea pasta – a recipe that was the result of trial and error, having substituted the peas for yolks and adding xanthan gum – pork from nose to tail, and a house-made XO sauce that was out of control (if they sold it by the jar in the restaurant I would buy a case).

It was the second year in a row The Mitchell Block took the Rendez-vous title with a dish that was deceptively simplistic (in 2016 they won with a soup that included pea tendrils grown in the restaurant, along with pig’s ears), belying the ridiculously time-consuming amount of work that goes into making it.

This adherence to arduousness and patience is a hallmark of McKay and his crew.

The best pasta I've had outside of Italy - freshly made on the premises at The Mitchell Block @themitchellblock in the culinary centre of Winnipeg. My main was homemade Rigatoni with Spicy pork and fennel sausage sugo finished off with shaved Parmigiana Reggiano cheese - The meat sauce was spicy with the coolness of fennel coming through to cut through the richness of the sauce - the salty cheese added another layer of flavour to the dish and the pasta was perfectly formed and with just the right amount of softness and bite - al denté - this hidden gem of a restaurant is well worth a visit when you're in The Peg! #onlyinthepeg #exploremb #peggrub #winnipegeats #winnipeg #sugó #sugo #parmiagiana #rigatoni #italian #spicyporkandfennel #italiansausage #pasta #pastaporn #pastalovers #porksugo #themitchellblock #travelgram #travelandeat #traveltoeat #guardiantravelshots #guardiantravelsnaps #fbcuk16 #fbcuk17 #instafoodblogger #instafood #instafoodie #foodporn #fooddiary #foodwriter @tourismwinnipeg @travelmanitoba @canadanim

“My dad gives me the gears on this because I was a chef before I was a restaurateur and I still feel like I am a chef that is trying to run a restaurant,” said Sean McKay.

“But the way I see it is if the guy at the head of it doesn’t want to cut corners, then that trickles down and makes for a better experience. It doesn’t make for more money in the bank, but I do believe it makes for a better restaurant,” continued McKay.

A few years ago when McKay took over the space, it was the original Tre Visi location – a two-decade old Winnipeg fine-dining institution.

In what is surely the strangest restaurant exchange in Winnipeg history, when McKay first took over the space he had to work out a deal with the old owners to continue running his restaurant as Tre Visi for a full year – meaning sticking to the original Italian menu – before he could rebrand and make it his own (more on this below).

Before this, McKay was the head chef at Bonfire Bistro. He originally started cooking in high school while living in Belgium, where his dad, who was in the military, was stationed at a NATO base.

In Belgium, McKay would skip class in high school, take his dirt bike to the local markets, and then prepare dinner for his parents when they got home in an attempt to make up for playing hooky.

After graduating high school in Belgium, McKay worked in a wood workshop there, and developed an admiration for carpentry. When the family moved to Winnipeg he was still contemplating becoming a carpenter, so it ended up nearly being a coin toss between enrolling in the culinary arts or carpentry program at Red River College.

“What I like about pasta is that it is very manual, which was what it was like woodworking,” said McKay.

“Both take quite a bit of labour – they are very hands-on, so in the end you can step back and say, ‘look what I created.’”

McKay and his dad’s carpentry skills can be found in the restaurant, as they transformed the bar and wine holders and fixtures, often using reclaimed wood from the apartment building being gutted next door.

Now back to that first year bit, as that is where his love and extra effort on the pasta front came to fruition.

“When you first get your own restaurant there is all the stuff you want to do… but we were limited, which turned out good as I had these lofty menu ideas that would just not have worked in this kitchen,” said McKay.

“We had to start off with this old-school Italian menu, so I decided we should do the best we possibly can with it and so we went all-in with all fresh pastas.”

In the restaurant, now that it is fully McKay’s, they create on average four types of pasta (in a kitchen where counter space is few and far between) along with gnocchi in the upstairs lounge (which has its own tiny kitchen too).

For their extruded pastas (where the dough is pushed through a machine) they have a couple different recipes, but they primarily use just a semolina flour base with water (“No egg,” said McKay, “It’s super old school.")

For the hand-cranked pasta they make a dough heavy with egg yolks and 00 flour with no water, while they also have a torchio pasta maker (a hand-cranked pasta press which sits in the front window when not in use) that has its own recipes, while McKay will also use a chitarra (which, as you can see above, utilizes wires that you roll pasta upon to make noodles) for fettuccini, spaghetti and other long thinner noodles.

My current jam is the agnolotti ($25), which is stuffed with buttery sweet potato purée, and finished with garlic brown butter, sage, and house-made ricotta.

When you get all the elements on one fork, it is luxurious. The filling is so creamy, the noodles have a toothy quality (they only hit the water for one minute), while the fresh ricotta and aged balsamic provide the acidity to buttress all those buttery elements. It’s killer; I wish it could sponsor the soccer team I play on (I would slide tackle hard for it and track back on defence, which is saying a lot as I am one lazy winger). 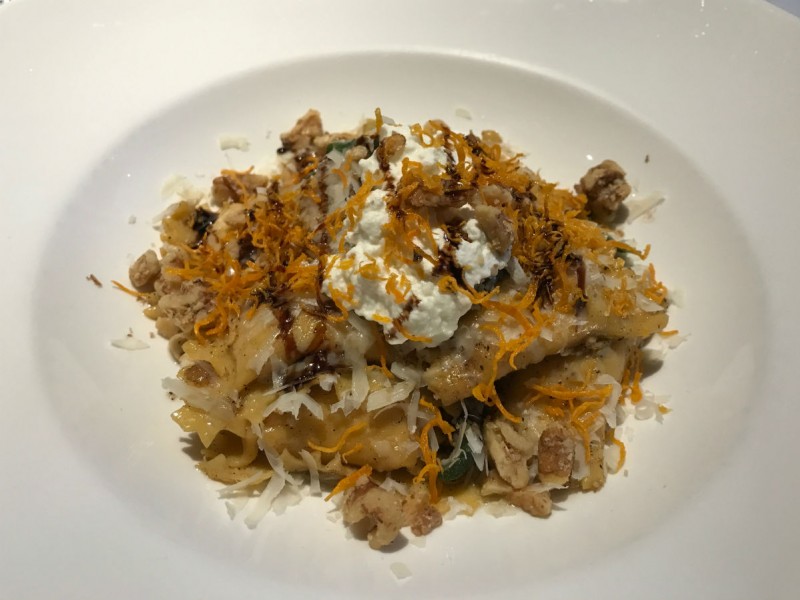 While other top-notch Winnipeg restaurants do make their own pasta, another unique aspect of The Mitchell Block are the portions – particularly the pastas – which are huge.

To see the kitchen's full array of skills you can also book the chef’s table upstairs, where they serve around five-courses for up to six people in the wine cellar. (Bookings are taken two weeks in advance for this).

The upstairs lounge seats 50, and is a popular destination (particularly on Thursdays for buck-a-shuck oysters) for pre-theatre/ballet/Concert Hall events in The Exchange District.

If you want to stay in but still eat some of the best pasta outside of Italy, you can also buy The Mitchell Block’s dried pasta at Forth (their next door neighbours), Old Church Bakery and Kenaston Wine Market. 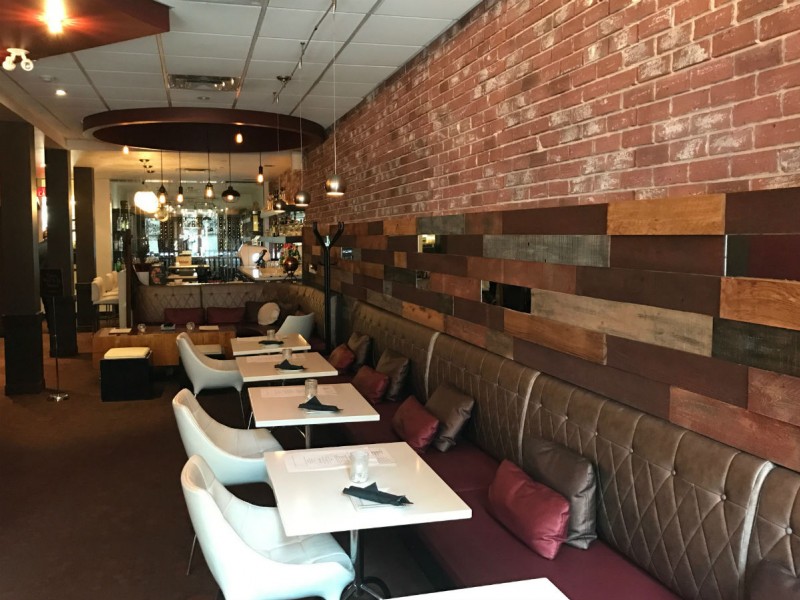 The Mitchell Block is located at 173 McDermot Avenue, right in the heart of Winnipeg’s theatre district.
Hours are Monday-Thursday, 5 to 9 p.m., Friday-Saturday, 5 to 10 p.m., Closed on Sundays. Reservations are recommended and can be made by calling 204.949.9032.