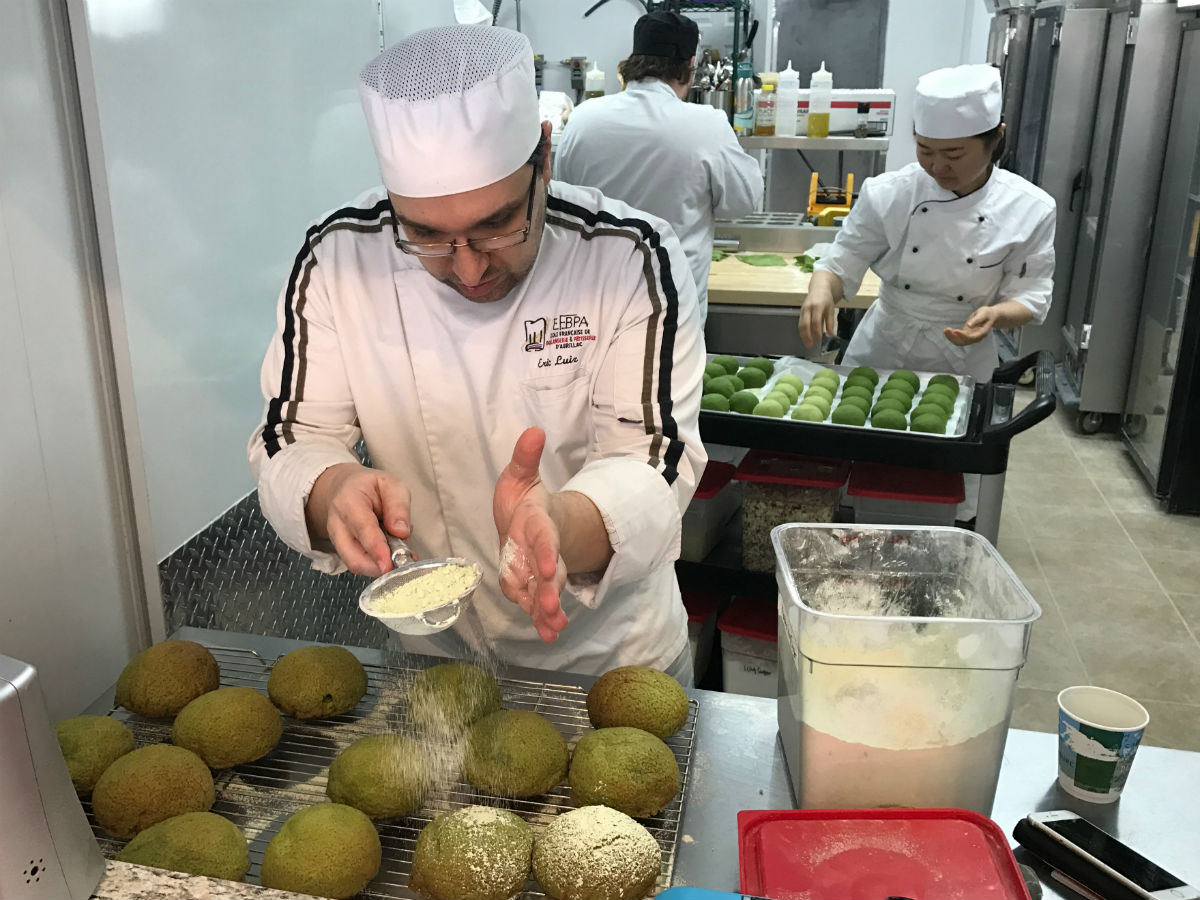 Take one part Saint-Étienne, France, add one part Nanjing, China, several parts Winnipeg, then combine with local wheat and butter along with some unexpected international ingredients and you get yourself The Thaw, Winnipeg’s newest bakery.

“You could say the style is like fusion,” said head baker Eric Luiz, the Saint-Etienne representative on staff, “but with French techniques.”

“For instance, a good example is our taro coconut brioche [pastry], which starts with French brioche… the same that I would make in France… that we combine with [a sweet sauce of] taro root and purple yam.”

“It’s just one of our items you won’t see anywhere else.”

The Thaw (3-1235 Pembina Highway) has only been open for three weeks (although they were closed for most of last week when they needed to replace a circuit breaker) and they are already flying through their inventive, daily inventory.

“The first day we opened we posted an ad on WeChat – which is like a Facebook for the Chinese community – and just from that, along with some word of mouth and support from the Fort Garry community, we had a customer every two minutes,” said co-owner Cole Bates.

“It was crazy, we sold out of everything.” 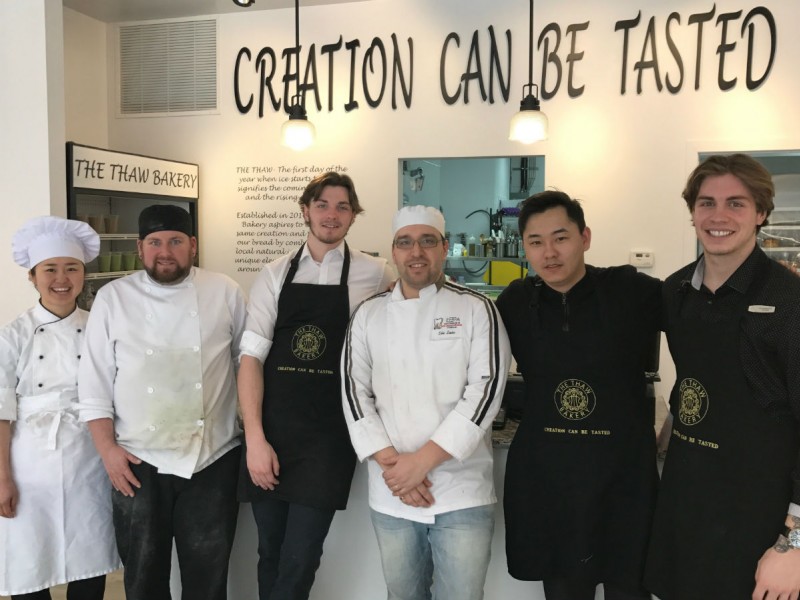 Bates co-owns the bakery along with assistant baker Vincent Yang, who was originally a cook in his native Nanjing for five years. The two met at the University of Winnipeg where they both lived on campus. Yang had been in Winnipeg for five years, having originally done an exchange at U of W through his school in China. He’s also recently added culinary school to his resume.

“I just finished the [Culinary Arts and Design] course at Manitoba Institute of Trades and Technology because I wanted to learn more about the Canadian cooking style, after already studying Chinese and French [cuisine] for a long time,” said Yang.

They found Luiz through an online ad they put out a short while ago. Luiz originally moved to Winnipeg one year ago from Saint-Étienne to be with his wife who had just landed a job after finishing her studies here. When he first moved he was a baker for a few months at Tall Grass Prairie’s Wolseley location before seizing this opportunity. 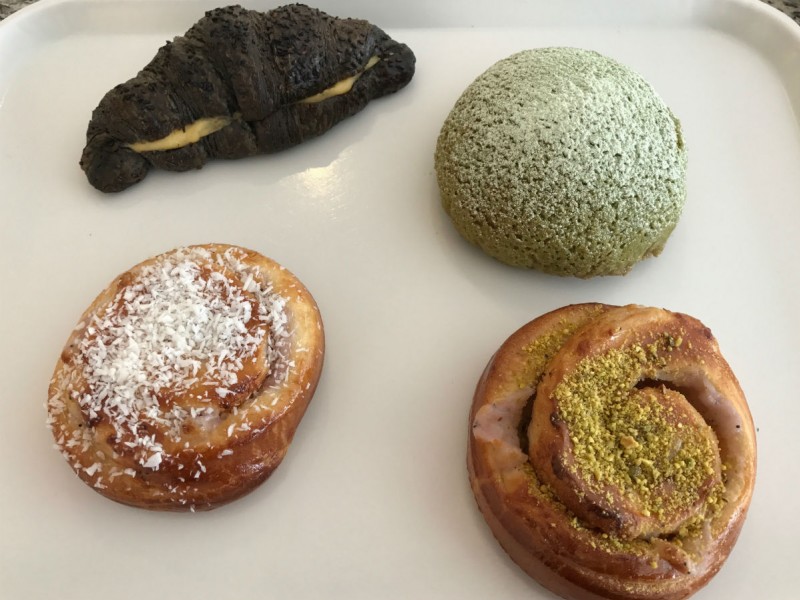 “All three of us have brought all our ideas together, and we’ve created all our own recipes for these products,” said Yang.

All the savoury pastries start with a sourdough, which Luiz started three months ago, while the sweeter numbers utilize brioche. They use wheat from Elie, Manitoba’s Prairie Flour Mills Ltd., along with local Notre Dame Creamery butter.

The kicker is the other ingredients that come into play, like high grade Japanese matcha that is rolled into dough, real black truffles from Italy that are mircoplaned into focaccia, and osmanthus fragrans flowers – an Asian ingredient normally used in tea that has a delicious peach flavour and aroma – that finds its way into a rhubarb compote.

One of the highlights for me is Luiz’s black cheesy croissants. The dough is infused with natural squid ink, providing a striking colour and some added saltiness, while the filling is a Mornay sauce composed of Maple Smoked Extra Old Cheddar from Manitoba’s Bothwell Cheese. I had one this morning while writing this and it is the new breakfast of champions. The croissant is still light and flaky with plenty of air between the layers, while the creamy, smoky cheese provides an unexpected taste and satisfying richness. 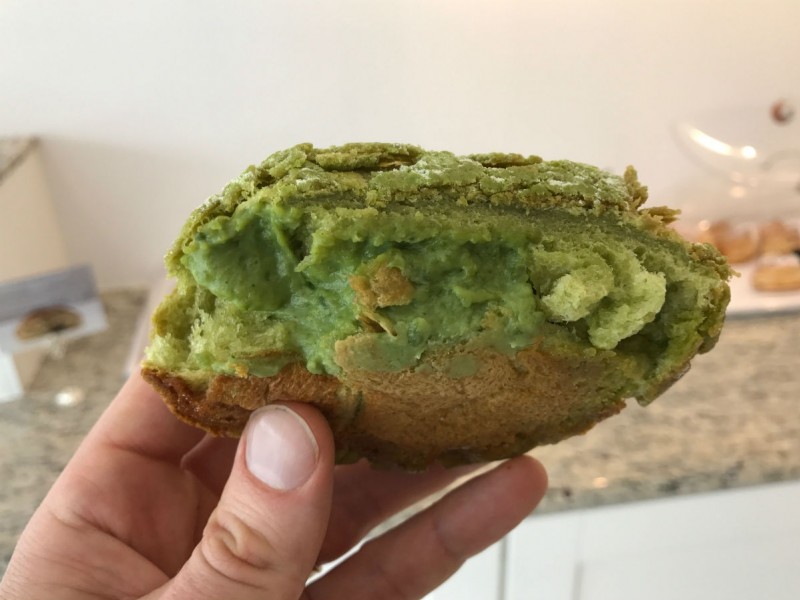 The matcha brioche is so crispy, gooey, toasty and delicious (PCG)

Then there is the quickest-seller so far, the matcha brioche (I’d say biggest-seller, but everything has been selling out. To deal with this they have just installed a new dough sheeter to increase production).

I had one right out of the oven and it is dynamite, particularly if you are fan of matcha. The crispy crust on the outside adds a toasty flavour to the matcha, while inside the fluffy brioche you are met with an Italian-style pastry cream that is nearly as light as mousse.

On opening day they sold 140 of these – they are that good.

The osmanthus rhubarb croissant, which comes topped with almonds and is shaped like a turnover, is also a thing of beauty. The filling is sweet, tart and floral, with the rhubarb working harmoniously with those osmanthus petals.

There are also more common items like chocolate hazelnut croissants, while new seasonal products will continue to come out now that the kitchen – which is open to the storefront – has been upgraded.

“This is only the beginning,” said Luiz. 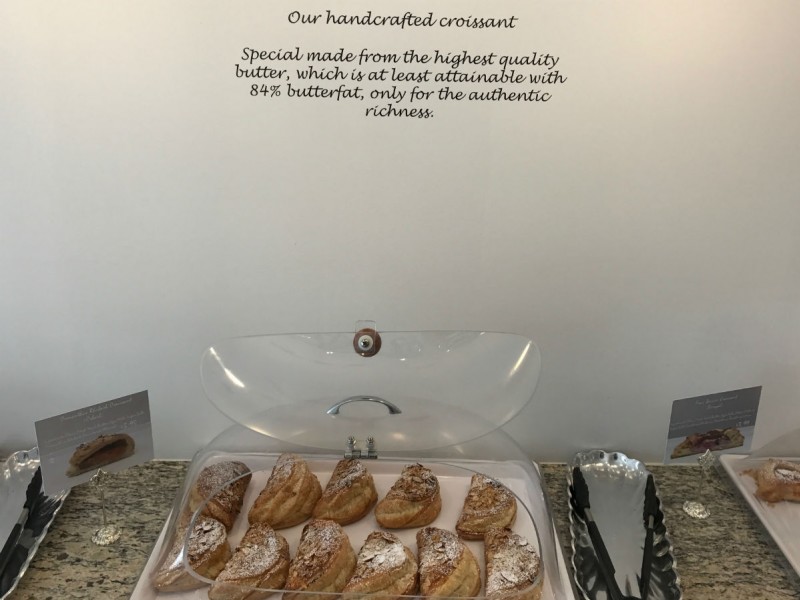 The space is minimalist and clean, with white walls surrounding small display cases of pastries on granite counter tops. There are ingredient cards beside the pastries, while the walls also contain descriptors of the baking processes and unique ingredients used in the breads.

About that name: It’s an ode to spring, so don’t expect to buy any frozen baked goods here. All the products are rolled out and baked fresh throughout the day.