Winter is coming. Cold and flu season is coming. So it’s about time we do what Q Tip tells us on the new Tribe Called Quest  (which itself is spicy, complex and tasty) and eat that ramen.

Winnipeg might be a little late when it comes to catching the ramen train. Perhaps it’s due to our small Japanese population and the fact there are no shoulder-to-shoulder steamy ramen-only joints like you find in Japan, Vancouver, NYC and more recently Toronto, but that doesn’t mean you can’t get some quality bowls in the city.

First and foremost there is Yujiro (1822 Grant Avenue) – the place I often argue is the best Japanese restaurant in the city – where chef Edward Lam’s kitchen produces what you would think are untraditional ramen bowls for lunch only from Thursday to Sunday.

“Two summers ago I traveled back to Japan and we had some crazy ramen that actually threw me off of what really ramen is all about now in Japan,” said chef Lam.

“It is not just miso ramen, shōyu ramen… It’s more like any broth with nice, very flavourful meat and other components.”

[For a little primer for those not familiar with ramen broths, the four main types are: tonkotsu, shōyu, miso and shio, while many regions in Japan have their own particular style. You can read more about it all here in Lucky Peach.]

What Lam found on his last Japan trip was all kinds of ramen that broke from tradition, where combinations of ingredients and odes to different regions and countries were the norm. 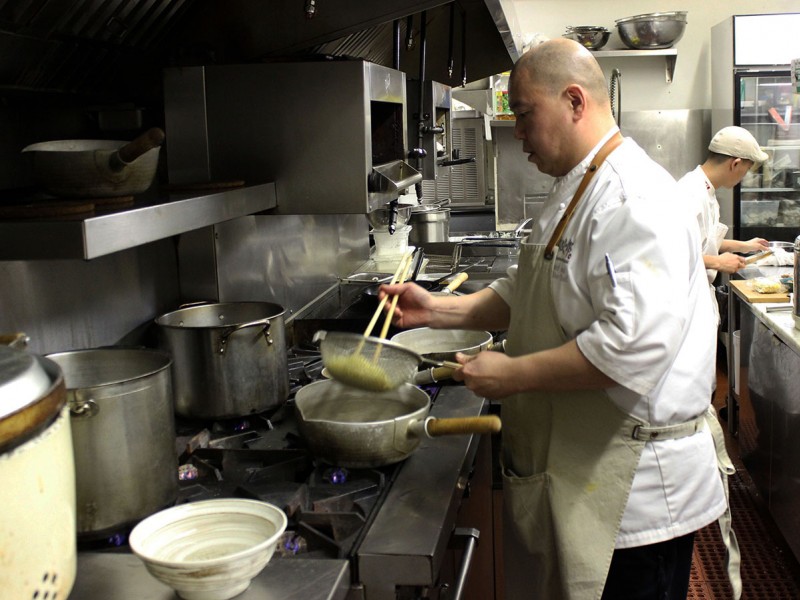 The results of this, after tinkering with flavours, broths and condiments, are bowls that have evolved over the last two years to satisfy his customer’s demands for “crazy, pungent, spicy ramen,” which pull on Lam’s background (he’s originally from Hong Kong) and cooking style.

Take the spicy miso ramen, which uses ground beef that is first simmered in rendered Wagyu beef fat (the eatery serves Wagyu regularly, so the end up with tons of grease from it) as a topping, along with a driving force of chili oil that is representative of Lam’s parent’s hometown of Chaozhou in southern China. You also get strips of kombu that provide a chewy texture and an umami base note, bamboo shoots for some pungency, and an egg with an enticing, just-set golden yolk that melds with the pork stock for added creaminess.

The chili oil itself is, in the words of Lam, “crazy spicy” and at first they were using two tablespoon per bowl.

“People were saying I can’t talk after – but it’s so good,” said Lam. “Because the chili oil is not only spicy, it has all this flavour too.”

A regular order of the spicy miso now has just half a tablespoon of this chili oil and it was still plenty spicy for me (the sweat hit under my eyes during the last few spoonful).  Since they have perfected this balance for the broth it has, in the words of Lam, “put us on the map for Asian students in Winnipeg.”

“Those kids from northern and eastern China, they like it crazy spicy,” said Lam.

“They come and they will order a regular spicy miso [with one tablespoon of oil] and more chili oil on the side, and they just love it so much.”

In fact, university students from Asia have sort of taken over Yujiro on the weekends during lunch for ramen. Lam attributes it to Instagram and coverage from a Chinese food blogger, and he jokes that his regulars (who would normally come for sushi and other dishes) have given him a good ribbing on how they prefer now to do take-out on Saturday and Sunday afternoons, rather than wait in line with the young folks with their cell phones.

One of the newest bowls of ramen you can normally get at Yujiro is the dan dan ramen, which for me is the most flavourful bowl of broth, noodles and meat in the city.

Lam started making it after a trip to Toronto this summer, where his friends introduced him to this Chinese/Japanese hybrid that utilizes sesame and peanut butter in the broth.

The dan dan version at Yujiro is luxurious. The peanut butter does not overpower the rich pork broth, but instead lends a silky texture that is laced with spice from the chili oil.

For condiments you get minced pork, kombu, bamboo, smashed peanuts infused with ginger, scallions, and a sliced pork shoulder that is flavour city, having been marinated in peanut and ginger. The pork shoulder could be a side dish on its own – it’s really quite magical. The fat in the shoulder absorbs all the flavour of the ginger and peanut, the exterior is crisp from a quick fry, and yet every bite is ridiculously tender.

They have four different broths that are made once to twice a week. They start the broths on Monday, and over several days and steps they are ready for service starting on Thursday. All the broths are simmered for roughly 12 hours, while all other components, like the miso, are made from scratch.

The pork broth – which is the main base for most of the ramen – uses about four kilograms of pork bones, about half of which are roasted beforehand (Lam says if you roast all the bones the broth won’t have enough collagen, and therefore won’t be milky enough) along pork meat.

There is always a seafood ramen, made from a fish head and fish bone stock, utilizing the 30-40 fish the restaurant uses for sashimi and sushi dishes every week. There is also currently a tomato miso ramen served with beef shank that has been braised for eight hours.

The only thing not made in house right now, due to lack of space in the kitchen, is the alkaline noodles, although the ones they are currently using are toothy and satisfying.

With the popularity of these ramen lunches, Lam has started to look for a location to open a spot that will strictly do ramen. He says when they do, they will be making their own noodles.

Yujiro is open for ramen Thursday-Saturday, 11:30 a.m. – 2 p.m., and starting on Sunday at 1 p.m.
For other noteworthy bowls of ramen check out our review of  Dwarf No Cachette, where owners Yasuko and Takekuni Akimoto have brought a little bit of Tokyo -- and a lot of kawaii -- to Winnipeg, and Kyu Bistro.