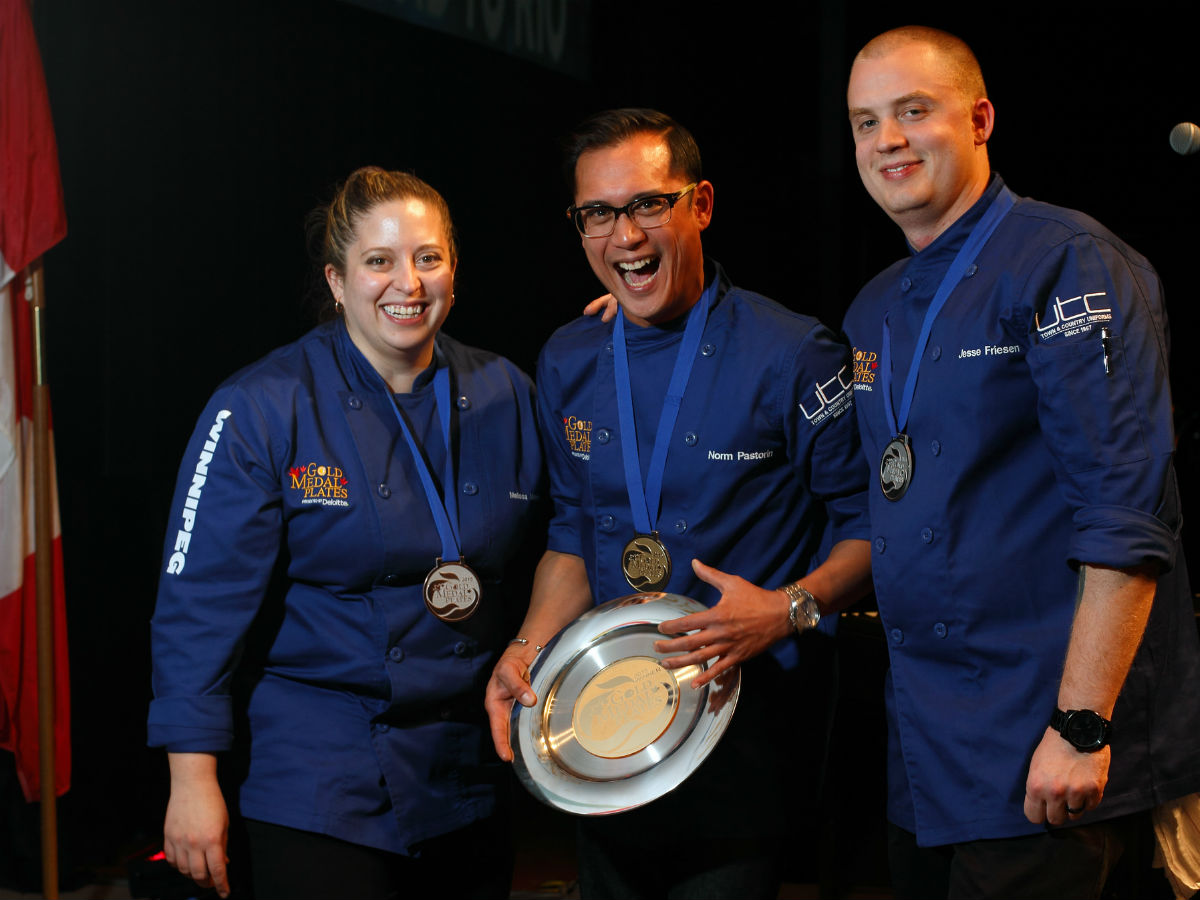 Executive chef at The Cornerstone

It might be time for a trophy case to be installed in the open kitchen of The Cornerstone (93 Osborne Street).

Not a bad haul for a restaurant that will turn three this February.

It was only the second time Pastorin had competed at GMP.

The event takes place annually in eleven Canadian cities and raises funds for Canadian Olympians while showcasing Canadian wine and food. The format of the event sees eight chefs prepare one dish (for upwards of 500 guests along with eight judges here in Winnipeg) that is paired with a Canadian wine. Based on the judges' scorecards, prizes are awarded for gold, silver and bronze, with the gold medalist going on to represent Winnipeg at the Canadian Culinary Championships.

On his first foray into the competition in 2014 Pastorin finished second, snagging silver with a duo of rabbit that he paired with Quails’ Gate Chardonnay. 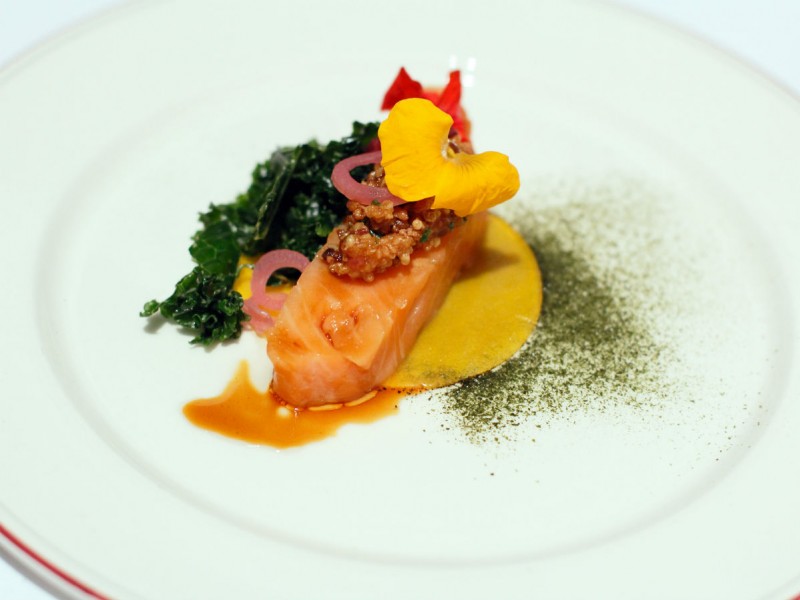 Last year, Pastorin did one better and won gold with a complex dish of poached salmon placed on top of a tamagoyaki with a soy-ginger-anise glaze (and several more components) that was paired with Burrowing Owl Chardonnay. The technique on display was enough for us judges to award him a narrow win over chef Jesse Friesen, who will once again be competing this year (you can read the full report by head judge James Chatto here).

The 2016 Winnipeg edition of Gold Medal Plates takes place on Wednesday, November 9, at the RBC Convention Centre Winnipeg. Along with performances by Jim Cuddy and friends, and the chance to meet some of Canada’s greatest Olympians, Pastorin will be serving up to 200 dishes for a VIP reception to start the show, before joining head judge James Chatto, Barbara O’Hara, Arvel Gray, Joseph Wojakowski, Christine Hanlon and myself at the judges' table.

Norm is part of a Winnipeg culinary power couple with wife Kristel Pastorin, who is executive chef at The Grove (164 Stafford Street). Both restaurants – The Grove and The Cornerstone – are owned by Miles Gould, and are two of the most popular neighbourhood restaurants in the city, each located on an iconic Winnipeg intersection.

Below, Pastorin dishes on his culinary chops, on what it takes to compete for gold, and what he expects to see at this year’s GMP: 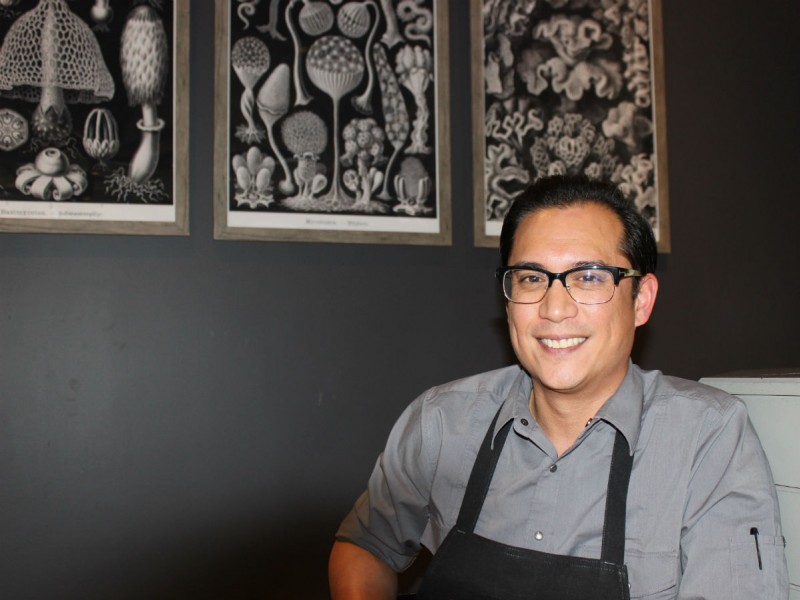 How did you first get into cooking?

I went to Red River [for Culinary Arts], but way back before that I was working in marketing in the Philippines, in Manila, and one of my clients was a food company. I had to do a marketing campaign for hot dogs and this company I was working with had their own food lab that was filled with culinary students from Manila. I became friends with some of these students – I really liked what they were doing – so when I came back to Winnipeg I dropped everything and decided to go into the culinary world.

I didn't start culinary school until I was 26.

In school I did my placements under chef Murakami at the St. Charles Country Club where I quickly saw that there were 18 and 19 year-olds who were my boss, so I realized I had to pick up the pace.

I trained there [St. Charles] for five years…. And Murakami was of course the man… after three years I was junior sous chef, and I told him I wanted to get into smaller restaurants, which I did, but it was tough because you quickly realize you don’t have everything at your disposal [like you do at a country club].

I met my business partner Miles [Gould, owner of both The Cornerstone and The Grove] at Fazzo, a modern Italian restaurant that we opened up. We had a wild ride for a year, and then it sank, but we kept in touch… and eventually we opened up The Grove. 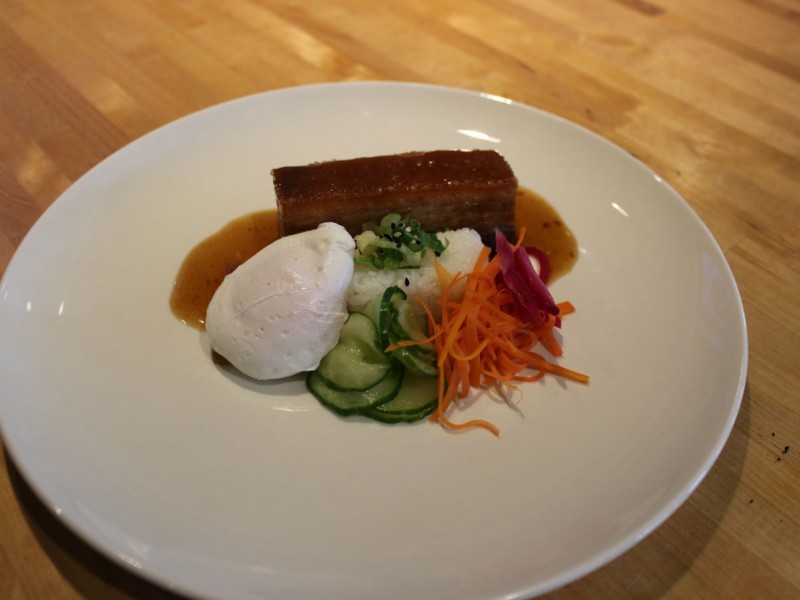 Pork belly with poached egg, spicy adobo sauce, pickled veg and steamed rice at The Cornerstone $14. Pastorin will be making a version of this dish as his showcase appetizer for the GMP VIP reception (PCG)

How would you define your cooking style?

I would say I am very focused on technique; I’m always about the process. From the cutting of an onion, or a mushroom, the technique has to start there; you can’t just hammer away at it.

I was always taught [under chef Murakami] to have respect for the product. That product was raised, it was a living thing, someone cared for it. So you should treat every product with respect, and proper technique is a way of showing respect.

I like classic flavours, but really right now – and as much as I hate the word – I do a lot of fusion. You can’t escape it. Being born and raised in Winnipeg I would go to friends' houses and eat different foods, and I remember all of it. And I want to honour that, and I want to play with that and showcase it at the restaurant. 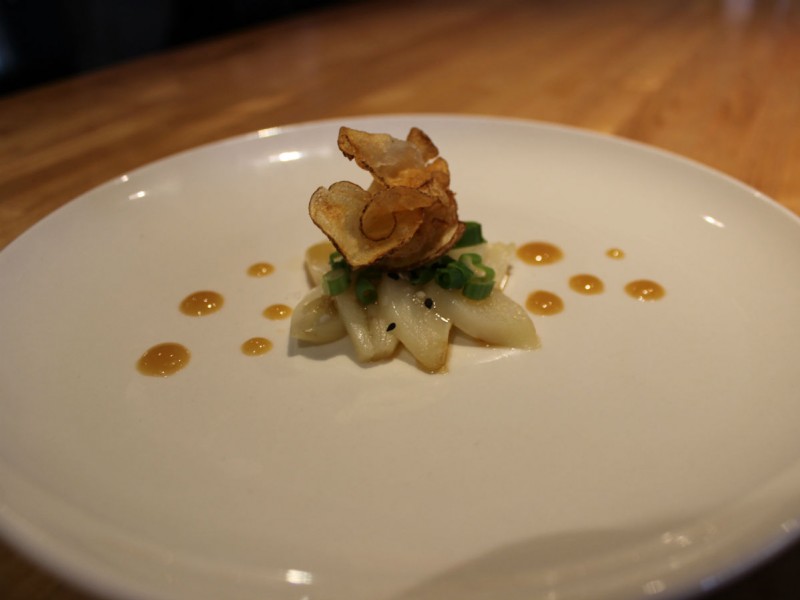 A new dish Pastorin is working on with deep fried-then-chilled local garlic (the oil really mellows it out and gives it the texture of a lightly steamed potato) miso honey, sesame oil, potato chips and Maldon salt (PCG)

Last year, before GMP I interviewed 2014 winner Luc Jean, and he said you were going to win….

Yeah, in fact when he won that year, and we were on the podium, he said that I was going to win next year… so after hearing that I thought, ‘okay, next year I am really going to compete. I’m going to try to come up with something really unique – but something that represents our restaurants and me.

Where you then confident going in [to GMP 2015] with your dish?

I was confident in our offering – but I wasn’t confident we were going to win. Our team worked on it a lot… and we were confident in the wine pairing… but just to come up with that dish was two months of work.

Before the competition for a week straight we did test runs: we had one chef on the quinoa, one on the kale, so all they had on their mind was doing this [one component]. And it was nuts.

The best compliment we received during the event was that we were all still smiling while working at a furious pace to make hundreds of dishes. But the thing was, we had rehearsed it so much, and plus we were happy to be there.

Who do you think is going to win this year?

I really can’t say, but certainly the people who are going to do well are those who are returning for a second or third time – because they now have that experience under their belt.

I hope that the person who wins is the one who takes the biggest risk. But it has to be a calculated risk, because you are serving over 500 people in 90 minutes, and it has to be a nicely composed dish. 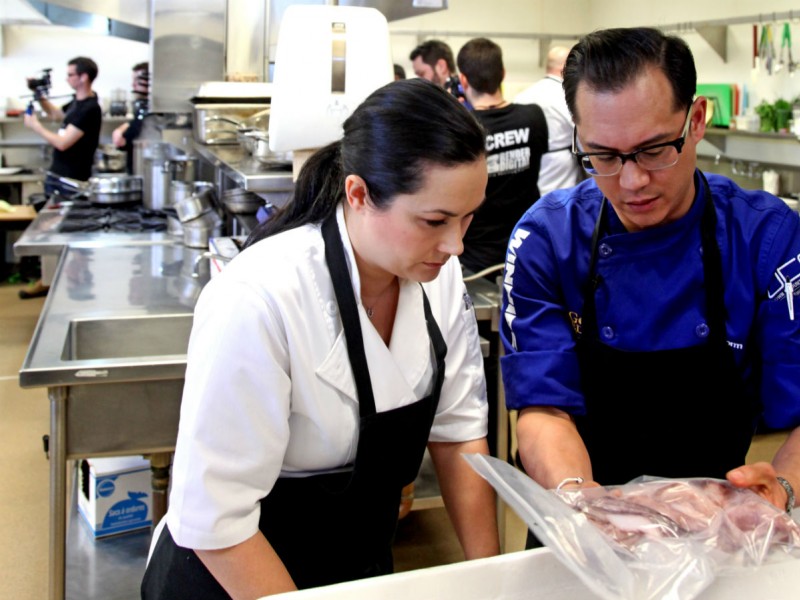 What was it like competing at the Canadian Culinary Championship?

It was intense; it was unreal almost. When I was there, seven of the 11 competing chefs were there for their second or third time. Four of the chefs were on the Maclean’s best restaurants in Canada list – so it all was very intimidating.

I guarantee when they go [to the Canadian Culinary Championship], that there will be chefs there that are returning, because the other provinces take this competition very seriously.

So whoever wins here, I hope they reach out to me because I will tell them everything, because I want Winnipeg to be up there.

This interview has been edited for formatting purposes.