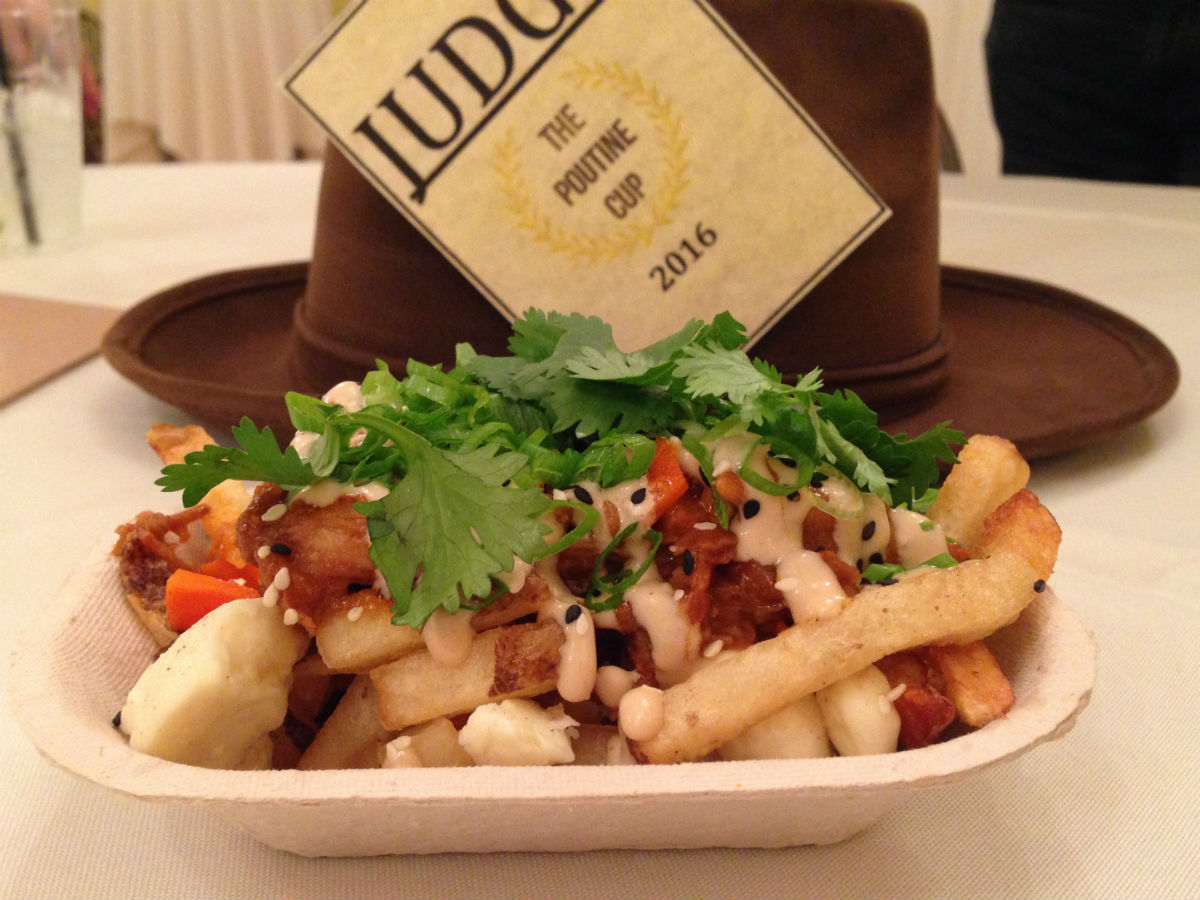 Over 500 people, 114 kg’s of Bothwell Cheese curd, and enough gravy to float a Voyageur canoe made its way into the walls of Fort Gibraltar last night for the 2016 Poutine Cup.

The event, now in its third year, featured 10 Winnipeg restaurants battling it out using organic potatoes from Poplar Grove Farm in the hopes of snagging two trophies – those being People’s Choice (based on ballot cards, one vote per person) and Judge’s Choice, which was decided by food writers Shel Zolkewich, Robin Summerfield, and yours truly. 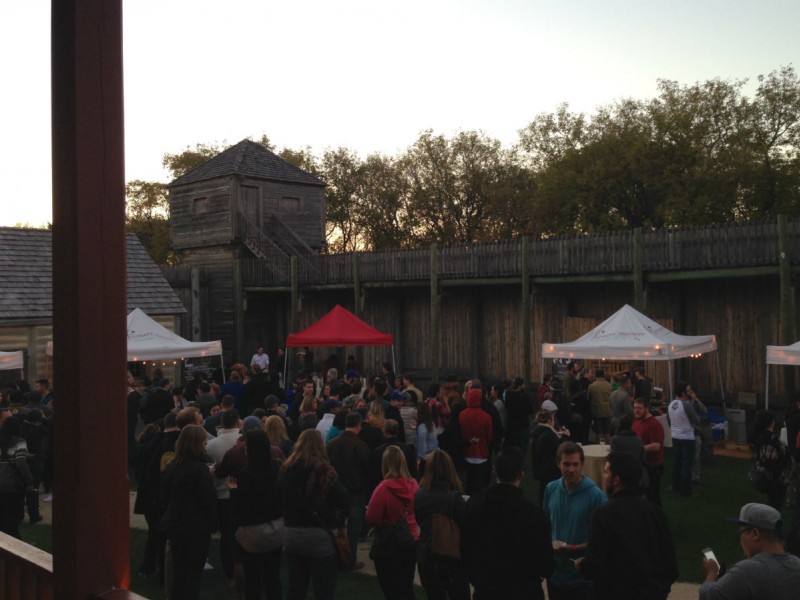 The big winner of the night according to the gravy-covered masses was Promenade Café and Wine, who scored over 100 votes with its “Ras El Hanout Pout!” to win People’s Choice. It was the most ingredient-laden poutine of the night, featuring Moroccan-style braised lamb, harissa spiced fries, roasted zucchini, a yogurt and tahini sauce for some acidity and added creaminess, along with an excellent topping of orange-dusted chickpeas that were made into crunchy little clusters with sesame seeds.

For us judges, this was the first year we’ve actually had to resort to math to come up with our winner (past judge’s winners Marion Street Eatery and Maw’s Garage were clear-cut in 2015 and 2014 respectively). There were some strong entries with brilliant individual components (which I’ll get to below), but in the end one particular poutine took the trophy, as we could not deny it was the one that still had us thinking about it – and indeed going back to seconds for, and this after eating 10 poutines – in the end. 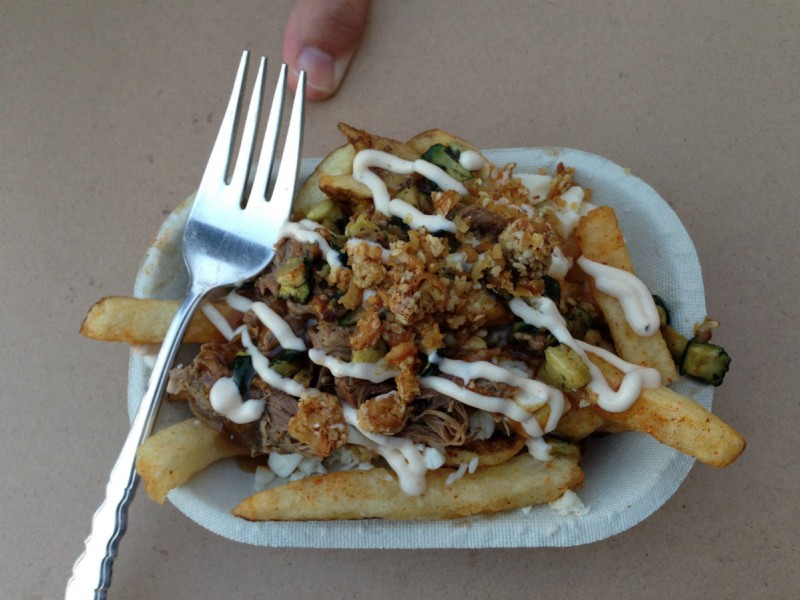 That poutine was “The House Party” (pictured at top of article) by The Cornerstone Bar & Restaurant. This bad boy was a gochujang forward number, featuring all the elements – pungent, sweet, salty and spicy, that make Korean food so great. The fries, which were perfectly crisp, were topped with braised pulled pork, kewpie mayo, cilantro, scallions and toasted sesame seeds. Visually, it was the second-best presentation for the night, while on the flavour side of things it was the one poutine that really stood out after consuming 5000 calories of other potato/sauce/cheese combos.

A first notable mention from us judges was to Chew restaurant who had the best fries in the competition. They were crispy on the outside and fluffy in the middle, and would have been rave-worthy in a restaurant simply served with a house made mayo. And this isn't to say Chew's poutine components weren't delicious – “The Naughty Bits!” featured foie gras gravy (in which was swimming a nose-to-tail offering of pork), Saskatoon berry-pickled mustard seeds for acidity, and maple crème fraîche -- they just suffered one main strike on our card in that we wanted a deeper tasting sauce. 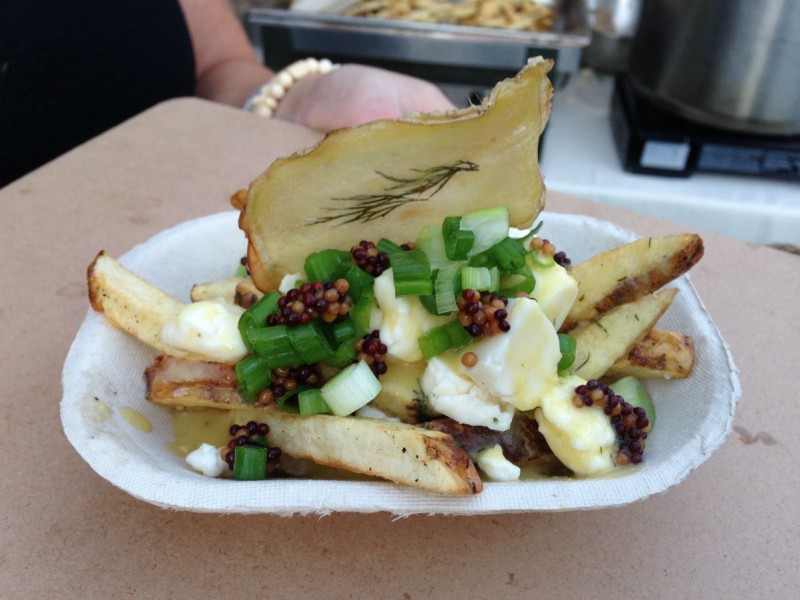 On sauces, our other honourable mention was to ERA Bistro, which we deemed had the best sauce and best overall presentation for their "Dill-Ectable" poutine. That dill gravy could have been enjoyed as a soup starter on a tasting menu; it was herbaceous and refreshing (as if that word has ever been associated with gravy), while the addition of a dill potato chip (with the dill pressed right into it) sailing on top made for a real pretty sight.

In contrast in the aesthetics department (but equal for sauce and surpassing in flavour) was Pizzeria Gusto’s Funghi Town poutine. Chef Jesse Friesen and his crew did an incredible job developing a deep mushroom sauce that had hints of smoke from being made in Gusto’s forno oven. It was complemented so well with a horseradish aioli too, and overall I had given it my highest score in the taste category. Its crux though came in the presentation category, as altogether this study in grey – along with not-so-crispy fries – may have cost it a trophy. 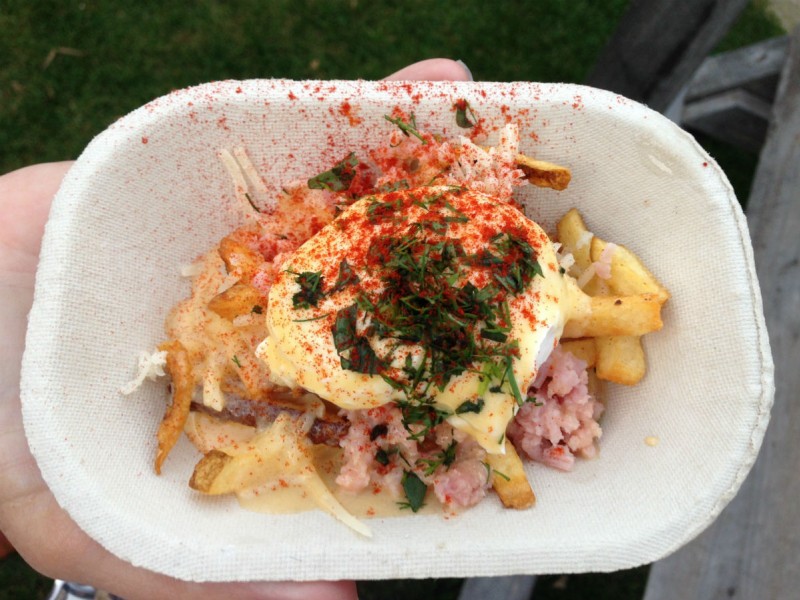 The other two honourable mentions have to go to Mon Ami Louis, which by far had the longest line all night long for its “Poutine Benedict,” and Sous Sol, whose “Ratatoutine” would have won if there was a trophy for best stewed vegetables in a tomato sauce. The crew from Mon Ami Louis had the audacity to be making hollandaise sauce from scratch all night long, with a chef whisking yolks and butter together over a MacGyver-approved double boiler, with eggs poaching in a hotel pan below, while the emulsification of the sauce was happening via the steam above.

All in all, it was another successful evening for the event, with all 500 tickets (sold in two batches, 300 then 200 more) being sold out in a matter of minutes.