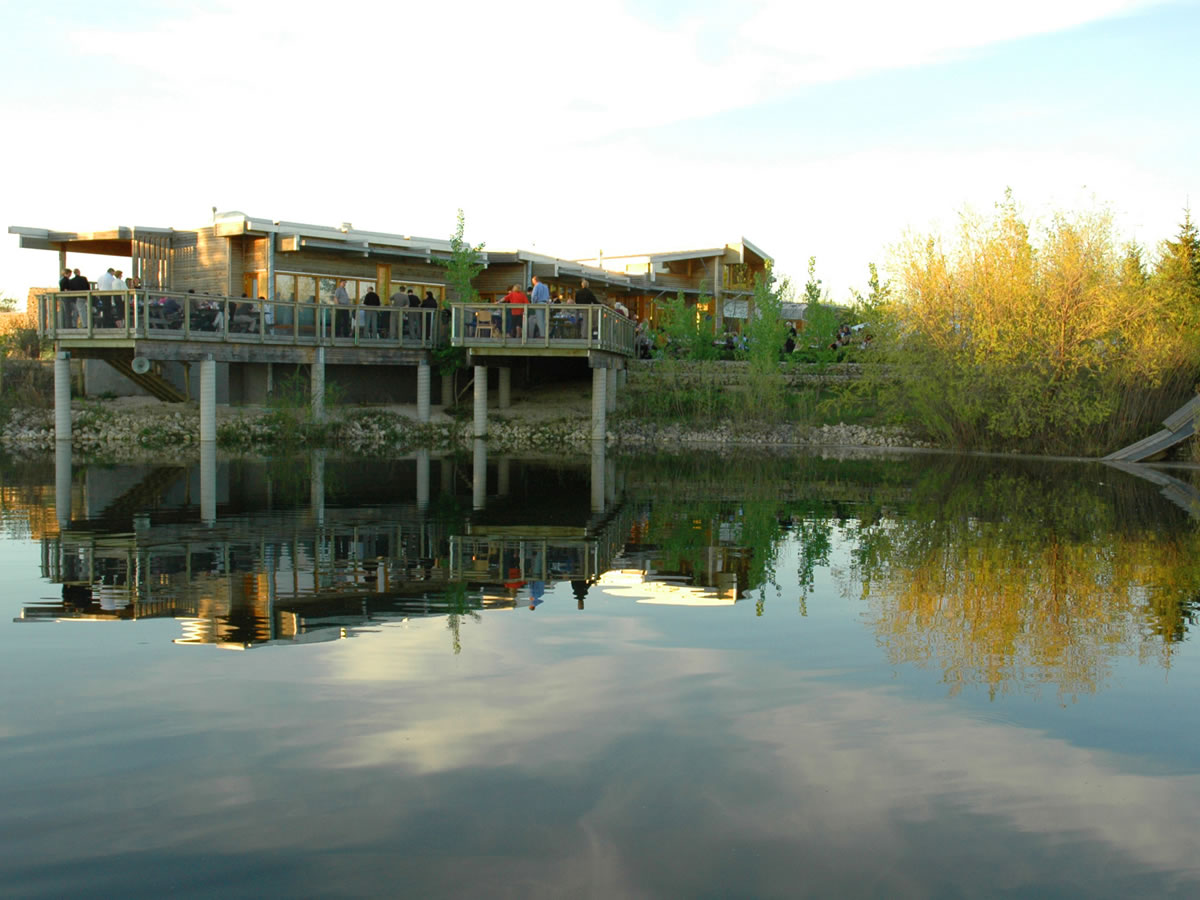 FortWhyte Alive in the Fall is Love at First Flight

If autumn is the E Street Band, then FortWhyte Alive is certainly Springsteen, because when these two come together it's guaranteed to rock – much like when The Boss opens a concert with Atlantic City.

For those of you are not fans of legendary rock acts, what we're saying is that FortWhyte Alive, Winnipeg's urban nature reserve – home to 640 acres of prairie, forest, lakes and wetlands – is the spot when it comes to getting the most out of fall.

For starters, late September is the time that thousands upon thousands of migratory birds and geese descend upon FortWhyte's lakes and wetlands, providing a sky-filled spectacle where the sounds of chirping, honking and wings fluttering wrap around you like a Hudson's Bay blanket. 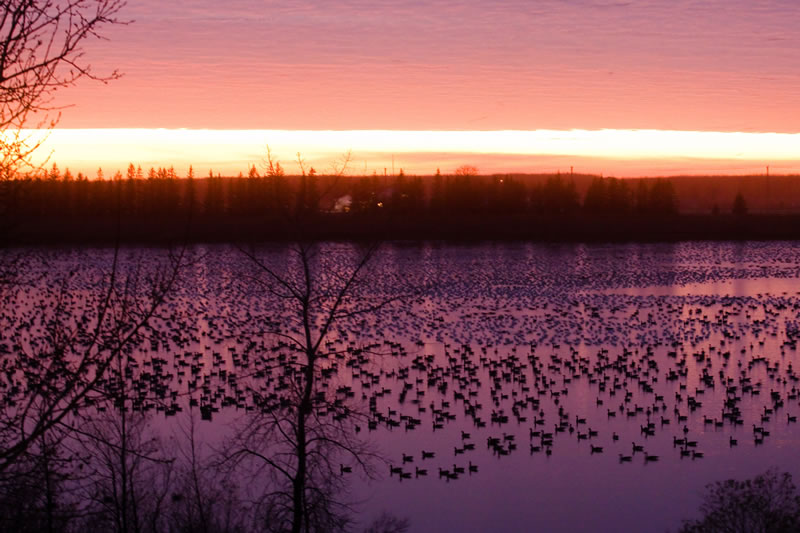 In anticipation of all this avian action, the fine folks of Diversity Foods at the Buffalo Stone Cafe – FortWhyte's restaurant in the Alloway Reception Centre, where so many ingredients often come right from FortWhyte Farms – put on both a Birding and Breakfast event, along with the popular Goose Flight Feasts.

Birding and Breakfast (only two events left, September 14 and 21 at 7 p.m.) showcases the start of the fall migration, as experienced birding guides point out all the little feathered creatures – up to 160 species of birds have been spotted onsite over the course of the year – who inhabit the wetlands.

And the Goose Flight Feasts (nightly dinner services, Wednesday to Sunday, starting September 21 and ending on October 23), well they are anything but fowl. There are three seatings per night for the Goose Flight Feasts (5:30, 6:15, and 7), and for $45 (or $25 for kids under 12) you get a farm to table three-course meal, where the ambiance of thousands of ducks and geese taking off and landing on the water (which the Buffalo Stone dining room and patio are perched right overtop of) simply cannot be beat.

The Harvest Supper is still a few weeks away, but we’ve already sold over half of our tickets. Which means if you want to be a guest at our farm fundraiser on Thursday, September 16, you’ll have to secure your spot soon! The talented chefs of Diversity Foods will be creating a delectable dinner using farm fresh ingredients, straight from our fields to your fork. Check out the incredible meal that awaits by visiting our website for the evening's menu—link in profile. Celebrate the harvest and the hard work by the Farm staff, volunteers, and interns while raising funds for healthy food programming and employment training at FortWhyte Farms. This evening promises not to disappoint! Tickets are $100 (receive a $55 tax receipt) and can be purchased online at fortwhytefarms.com.

Tickets are now available online for the dinners, which you can purchase in the above link.

And that previously mentioned FortWhyte Farms that we've mentioned, which supplies the feasts, is also available for exploration, while you can also buy goods straight from the farm at The Market, which operates from noon until 6 p.m. every Tuesday throughout September. And it's not just vegetables, there are also grab and go items perfect for your own fall feasts like freshly baked pies, and their very own honey made by Beeproject Apiaries – which is the total jam!

And the feasting doesn't stop there, as FortWhyte Farms also puts on one of the culinary events of the year on September 15, that being the Harvest Supper, their "celebration of food, youth and community." 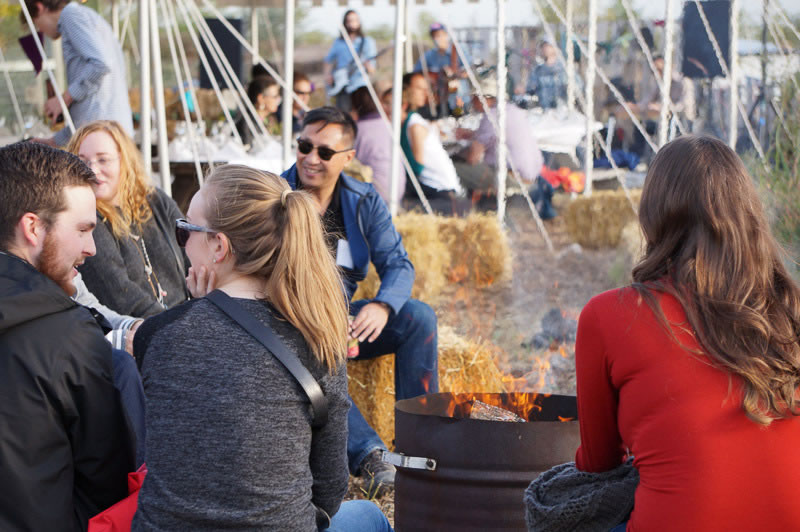 The 3rd Annual Harvest Supper starts at 5:30 p.m. (tickets can be purchased in the link) and it offers the ultimate farm experience, starting with cocktails and a tour of the farm, followed by a delicious family style meal – set in tents right in the garden at sunset – followed by drinks around bonfires, live music, games, and tons of fun for the whole family. Tickets are $100, with all the proceeds going to FortWhyte's programming that support youth engagement in "healthy food programming and employment training at FortWhyte Farms."

All that deliciousness aside, FortWhyte Alive is also (of course) the best spot in the city to experience the great outdoors. 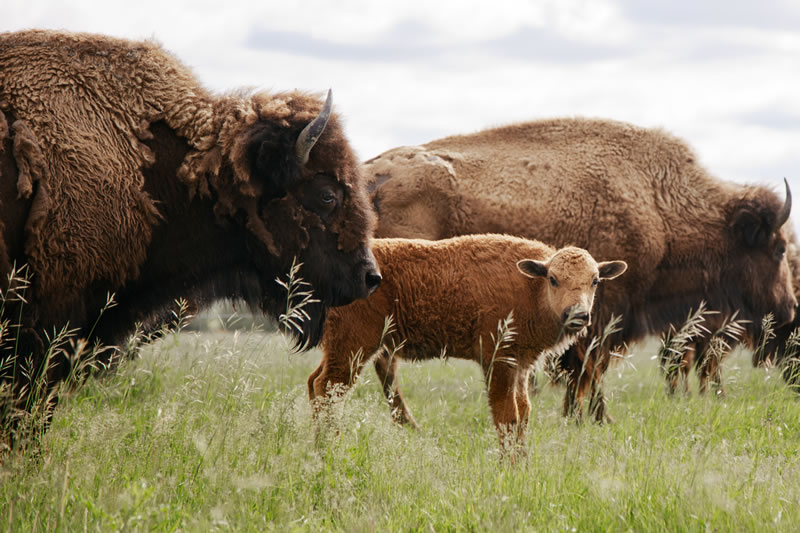 On a Bison Safari (photo by Ben Aguilar)

For starters, it's home to the largest herd of urban Bison in North America – who just also happen to be the biggest land animals on the continent (take that moose!). Now the best way to get up close to these behemoths is on a Bison Safari (offered every Thursday in September at 11 a.m.) where guides will tell you how these magnificent animals shaped the history of the prairies while you get so close to them that you can hear them munch on grass and grunt, which is #goodtimes to tweet the least.

And of course, there's also the option of going out for hikes (either self-guided, or with guides) through the wilderness – where wildlife spotting of deers, woodchucks (possibly in mid tussle!), hares, hawks, and herons are always on the cards; while you can also consult their online events guide to see just how many family friendly woodsy activities that they have in store (hint: so many!).

Finally, there's one last fall flight event that sounds better than melted butter on a hot biscuit. ‘Honky Tonk’ Night takes place on Monday, September 26 starting at 6 p.m., where "live tunes [and] cold cans" are part of the migration action that is already top billing. (Limited seating for this one, so book today by clicking here).

And... if some of these pics are any indication, you best start following FortWhyte Alive on Instagram, because they really bring the magic all year round.