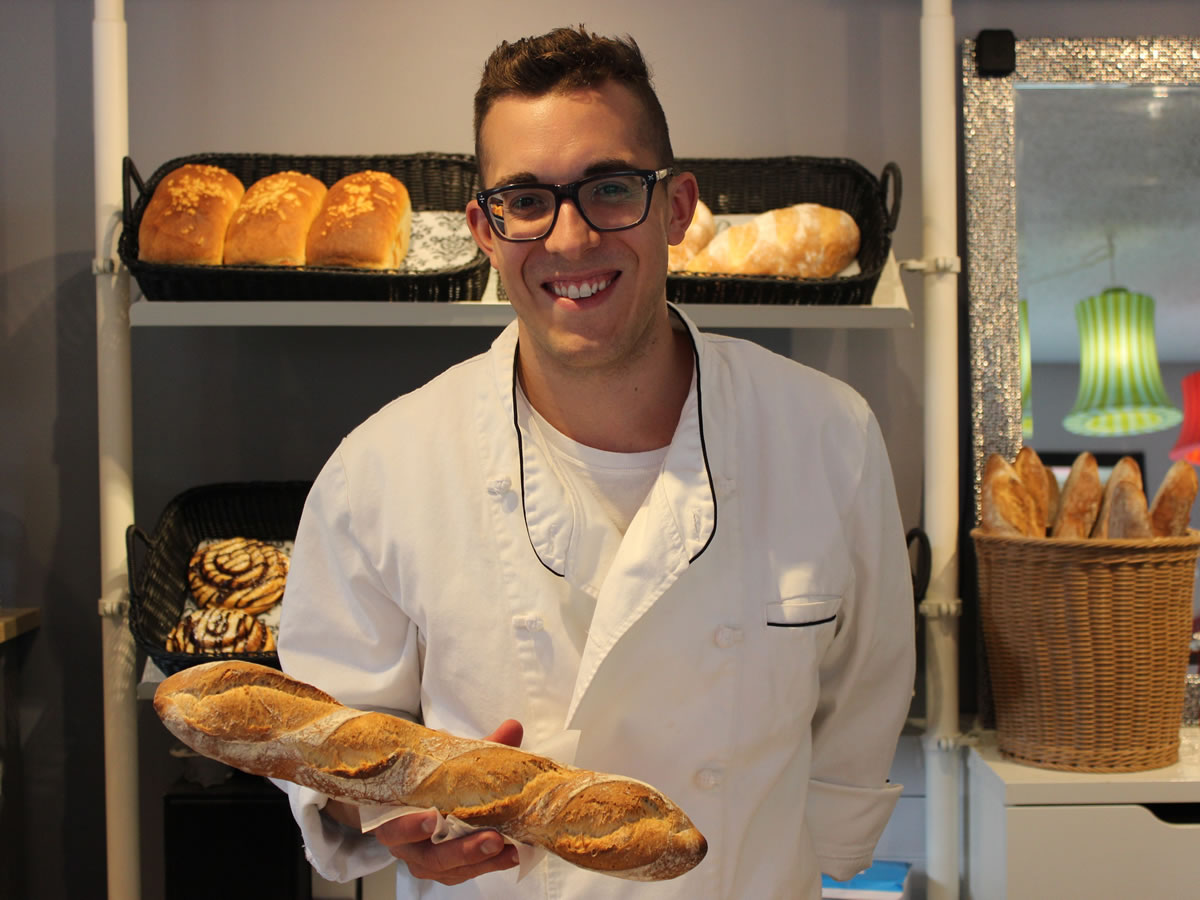 There's an online review of La Belle Baguette on Zomato, by someone with the handle Intl.Foodie, that begins with this gem: "Everything they turn out seems to be fraught with magic and I don't say that lightly about food."

It's high praise, but apparent she's not the only one, as La Belle has become, after just under one year in business, a culinary destination.

"But I didn't know that this place would start to bring people from all over the city; people drive from St. James, and Charleswood, and they come to little old St. Boniface for some of my stuff, so that has been just great." 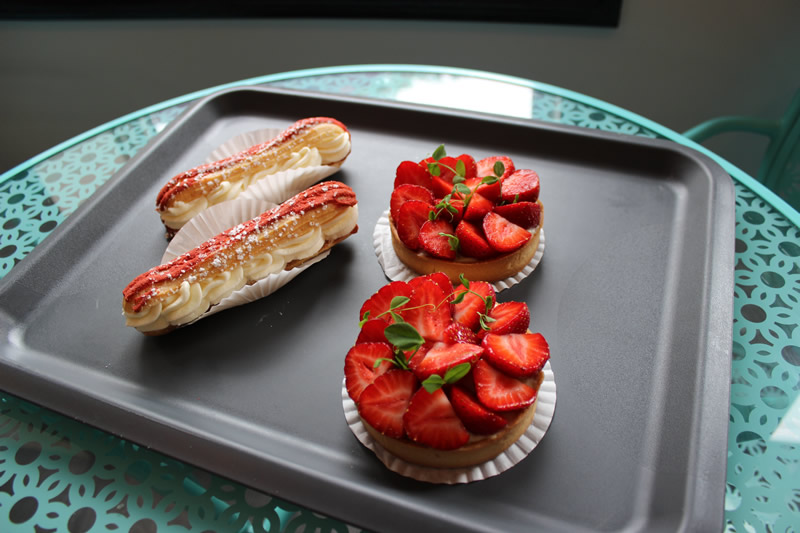 What they come for is artisanal breads, pastries and sandwiches, the ingredients in which are meticulously sourced. The flour comes from Prairie Flour Mill in Elie, MB (which frequent PCG readers will recognize as the local wheat that all the best bakers use), while the butter is from Notre Dame Creamery (again, the best).

The recipes have been crafted by Loiselle, a 28-year-old with an impressive pastry background that includes a diploma from Le Cordon Bleu Ottawa Culinary Arts Institute, Winnipeg's Frenchway Café, Fairmont Chateau Lake Louise, and then several years in Montreal where he did everything from catering, to a working at a traditional French bakery, to being on the team that opened Maison Boulud at the Ritz-Carleton Montreal under world-famous chef Daniel Boulud.

"But at the last minute I decided to pack my bags and sell all my belongings in Montreal and start a new life here." 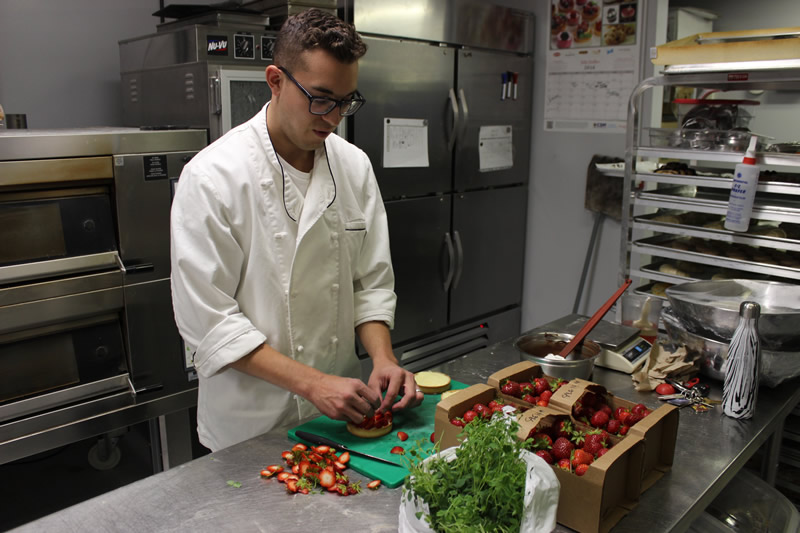 He came back to Winnipeg for family, and ended up meeting his partner Peter Paley and running Paley's restaurant the Oak Wood Café -- a real neighbourhood gem in South Osborne -- together from February 2013 until Loiselle opened La Belle Baguette on July 17, 2015. (Paley and Loiselle just sold the Oakwood this spring).

Anyways, back to that "fraught with magic" bit, because the ticket here really is the pastries, which never last a full day on the shelf (that, along with the fact that this shop smells like heaven -- assuming that the afterlife is full of butter, flour and sweetness).

In fact, the only complaint Louiselle and his staff ever gets from regulars -- of which are many, the same faces show up every morning for a pastry and coffee -- is that there are never any almond croissants left after 10 a.m. 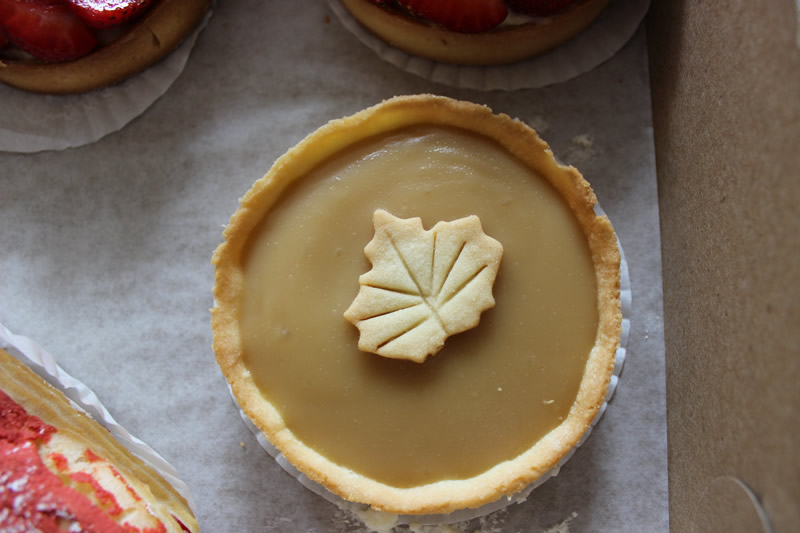 I'm not a huge dessert person, but I'm a sucker for pastries, and I have no shame in saying that during the drive back from our interview I actually began to squeal with glee while eating a Belle Baguette strawberry éclair (if you drove past me on the Provencher Bridge, I was the one with a face covered in whip cream wearing a stupid grin).

The strawberries in that beauty were picked the day before by Jardins St-Léon Gardens, whom Louiselle has come to rely on for summer berries, while the choux dough had a delicate shell on the outside, and a centre that was just a touch spongy.

What I love the most about La Belle Baguette is that all of Louiselle's creations are not overtly sugary. I brought back some strawberry tarts, éclairs, and maple tart to our office and our Tourism Winnipeg staff were in agreement that everything -- including the maple tart -- had just the right amount of sweetness.

The gorgeous, airy whipped cream in the eclair, along with the silky custard in the tarts allowed the local sweet-acidic strawberries to shine, while the pastry crust was delicate, crumbling when it hit your tongue and just buttery enough that it did not feel like overkill.

They also do excellent sandwiches at lunch on their baguettes, which rightfully holds up to the shop's namesake by being crusty on the outside, and chewy and fluffy in the centre.

La Belle Baguette has a charming little patio and the location is a peach, sitting at 248 De La Cathédrale Ave [locals will recognize it as the former home of Chez Sophie] right behind Saint Boniface Cathedral, one of the city's most-popular tourist destinations.

With customer lines often snaking outside the door in the morning, this first year of business has certainly been a beauty for Loiselle and his staff -- although it surely comes at a cost of beauty sleep.

"I arrive at 2:30 in the morning and start all the breads," said Loiselle, who also does the books and sourcing. "Then by 7 a.m. the store is full of fresh stuff. But, I now have a team of three people in the kitchen with me who do all the mise en place and the Danishes and whatnot for the next day."

"I have baker's plus owner's hours. So I may as well live here."

La Belle Baguette is open 6 days a week, Tuesdays-Sundays. 7 a.m.- 6 p.m. weekdays (but most of the good pastries are long gone by then), 8 a.m.-6 p.m. Saturday, 8 a.m.-2 p.m. Sunday. They also have a food kiosk that they share with Chocolatier Constance Popp on the Esplanade Riel.
For their one year birthday on July 17th they'll be throwing a special party with some guest costumed interpreters and much French merriment.