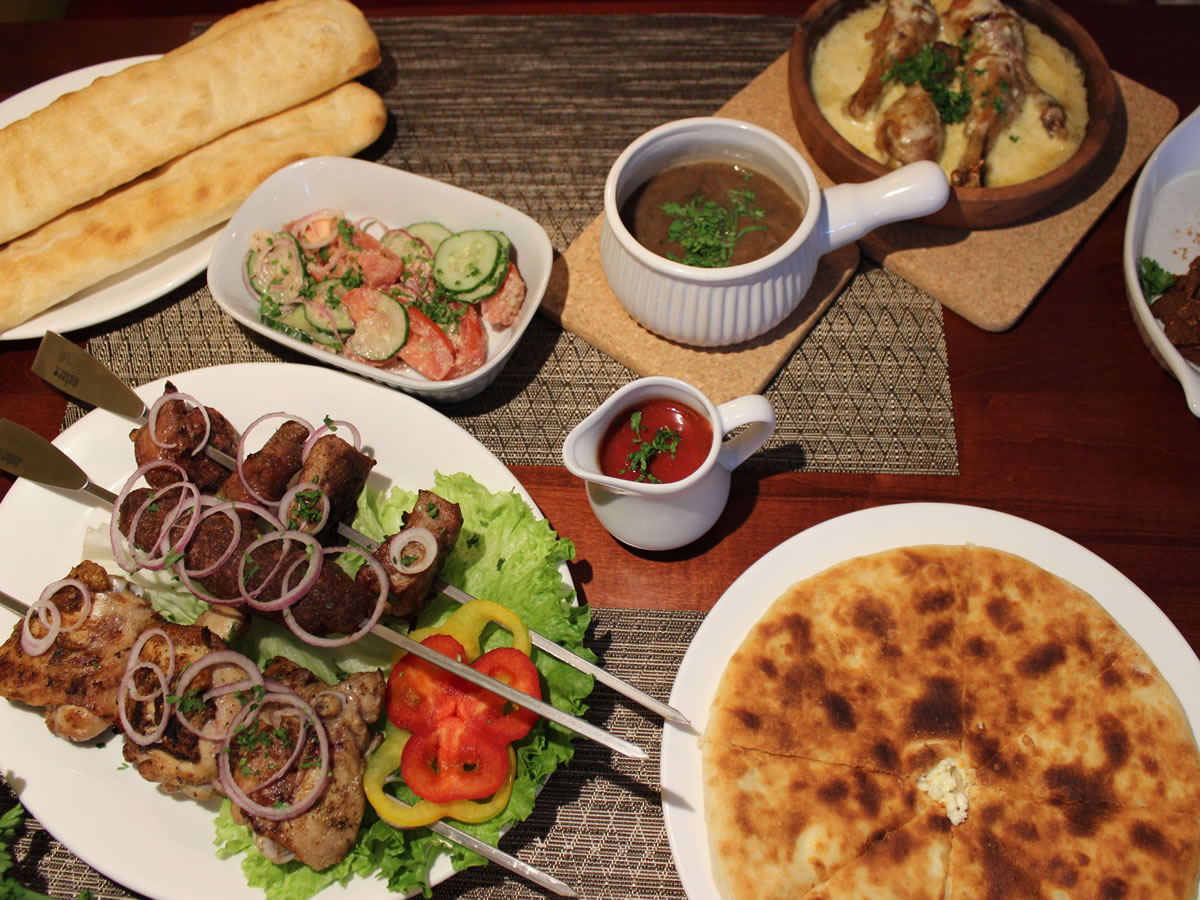 New & Notable: Saperavi brings the flavours of Georgia (the country) to Winnipeg

New & Notable: Saperavi brings the flavours of Georgia (the country) to Winnipeg

Some people may know the "the most interesting man in the world" to be the bearded Dos Equis guy, but I'm telling you that Saperavi restaurant owner Landis Henry could give him a run for his money.

He is a scientist with a PhD in biochemistry (King's College London, class of '78). He was born in Jamaica but grew up in London, England. He originally moved to Canada to work with the National Research Council as an industrial technology advisor in biotechnology, from whence he was moved to Global Affairs Canada and was posted abroad from 2004-2012 where he was Canada's representative in a program that redirected former Soviet weapons scientists.

In Henry's words, "Canada, the United States and the European Union felt -- I should say correctly felt -- that rogue states were coming to Ukraine and other former Soviet states to take and hire nuclear scientists, and scientists in biological warfare, to develop their own programs." 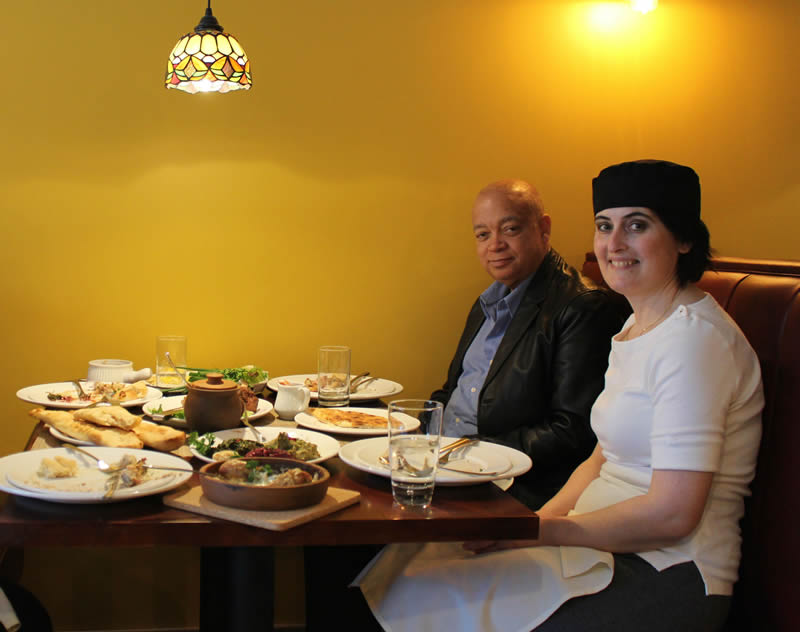 "So Canada, the U.S. and the E.U. knew they had to address this potential threat, so that weapons of mass destruction, or their delivery systems, could not get into the hands of terrorists and rogue states. So from 2004-2012 I was Canada's representative [at this post]; I was the executive deputy director for Canada at the centre in Ukraine for eight years."

Henry would go on to tell me that at the end of the Cold War Ukraine had the third biggest nuclear arsenal in the world; I tell you this man of the world is full of fascinating tidbits.

Prior to this role in Ukraine, Henry and his family were in Denmark for ten years (where his son Christer, who runs Saperavi was born), while before that, upon completing his postdoctorate in London, he lived in Switzerland (he also did an MBA in 1988). 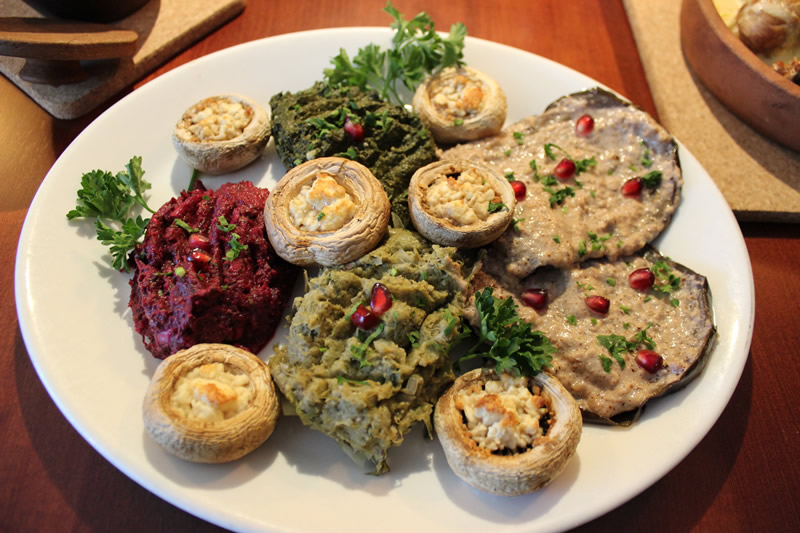 After the former Soviet scientist redirection program ended in 2012 -- which would see Henry constantly travelling around former Soviet Republics like Georgia, Azerbaijan, Moldova etc... Henry moved with his family to Winnipeg, where he bought a multiuse building at 709 Corydon Avenue (it has apartments above, and two commercial spaces on the ground and basement floor).

So what do you do when you are a worldly fellow who now owns property on Winnipeg's famed Corydon strip?

You open restaurants of course, restaurants where you can bring some of your favourite flavours from Europe to Winnipeg, that being the food of Georgia -- that picturesque, mountainous, wine producing country that is sandwiched between Europe and Asia on the Black Sea -- at Saperavi, and Danish smørrebrød -- those fancy open-faced sandwiches that are becoming all the rage these days in the culinary world -- at Il Molino. 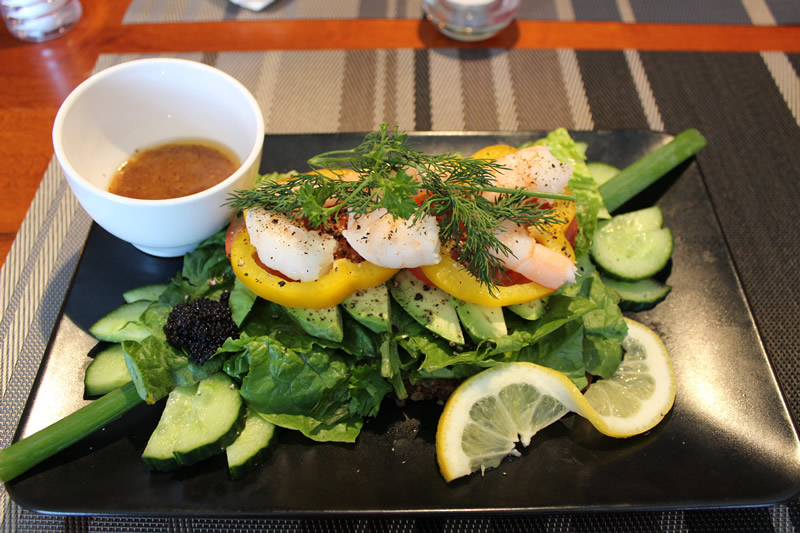 As a primer, Il Molino sits in the basement of the building and is open for breakfast and lunch (for breakfast they also serve authentic Belgian waffles from Wafflicious). It opened in the summer of 2015.

Saperavi sits on the main floor of the building and is open 4:30 p.m - 11 p.m., Tuesday to Saturday, Sundays until 9:30 p.m. It just opened on April 15 and has been busy with a clientele of Ukrainian and Russian immigrants -- two groups that actually know of Georgian cuisine.

Both restaurants share a 50+ seat patio, along with a fine selection of European import beers (more on that later).

Anyway, after getting Landis' history, my first question was (of course), "why Georgian cuisine?"

"When I was there -- which was constantly -- I felt the cuisine was different [than anything I had tried] and that everyone who came from the West really liked it. So I thought what we should do here is reproduce it, just like you would get in Georgia."

"But of course, there were obstacles," said Henry.

The main barrier was getting a chef. According to Henry -- and a quick Google search on my part -- there are possibly only three Georgian restaurants in Canada, all of which seem to be in the Toronto area.

Here in Winnipeg Henry could only find three Georgian families, none of which had a chef for hire.

So Henry looked back to the country he is so fond of and acquired the services of Zena Nozadze (after jumping through a great deal of hoops with Canadian immigration services), Saperavi's Georgian chef.

Nozadze makes all the food of her homeland from scratch, including all the light, airy breads that are excellent for both sopping up sauces -- of which there are several, and for lathering with phkhali, the savoury, super garlicky vegetable spreads that are composed of walnut, onion and either beet, leek, eggplant or spinach ($3.50 each).

"Georgia is referred to as the crossroads of Europe and Asia.... Its cuisine has been influenced extensively by the surrounding countries like Turkey to the south, and Russia to the north... most of which were powerful states," said Henry.

"But similar to Switzerland -- because it is mountainous and easily defendable -- it was able to remain independent, keeping it's unique characteristics. You do not see the same dishes [in Georgia] that are available in other countries. For instance, in a cosmopolitan country like Turkey you can still get fish and chips."

"In Georgia, you only see its national dishes, and we all loved that," continued Henry. 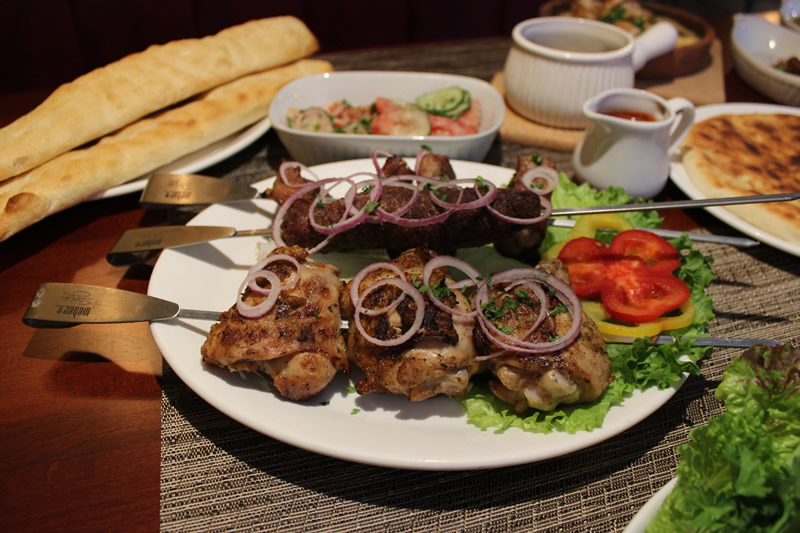 The flavour combinations and dishes I had during an extensive lunch with Henry and chef Nozadze where quite unlike anything I've tried before.

The main ingredients found throughout the menu are coriander -- which is used in pronounced fashion in dishes like the minced pork and beef kebabi ($10) where it gives the meat a floral, citrusy element like sumac does on a Persian kabob -- onion, garlic (big time #datenight), cumin, walnuts, pomegranate and vegetables in many forms (stewed, puréed and roasted) with the main flavour profile being savoury and herbaceous.

There were many standout dishes: for starters there is the shashlik (marinated meat skewers veal/chicken/pork, $13/$17/$22) whose delicious pork shoulder version is marinated in spices and Georgian wine before being roasted on a spit so the fat is rendered and crispy. The same can be said of the chicken thighs which are served whole (bone-in), featuring meat that glistens with juices below a crisp skin. Get them with the tomato sauce ($3.5), which is somewhat like a gazpacho, whose acidity rounds out the herbaceous, charbroiled meats.

Another excellent chicken dish is the shkmeruli ("chicken cooked in milk with garlic and Georgian spices," $15) which features braise-tender drumsticks swimming in a white sauce (almost like a béchamel) that is cooked and served in a clay ramekin. Get it with that delightful, airy bread, so you can sop up the rest of that sauce. 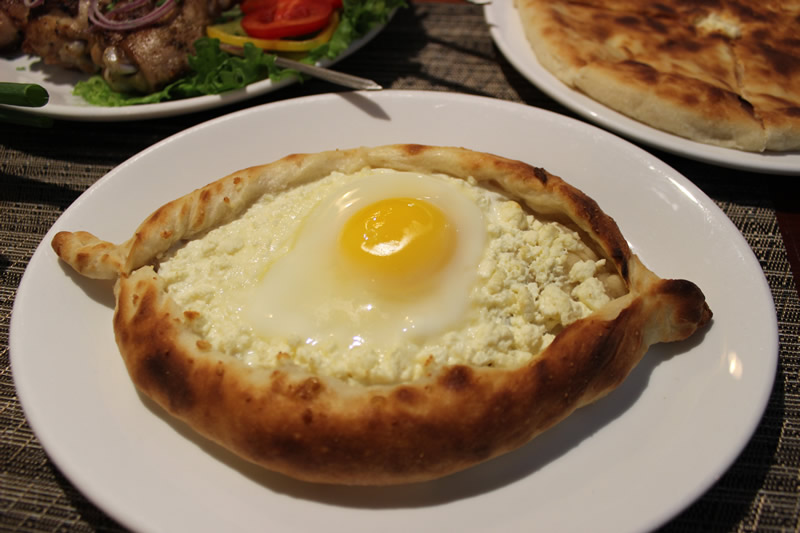 On bread, I also have to point you to the khachapuri-Imeruli ($12), a flatbread stuffed with salty feta (Henry and Nozadze tell me in Georgia this would be stuffed with Imeretian cheese, a ripe cow's cheese named after the region) that pairs well with a cold beer, and the khachapuri-adjaruli, that same bread made into the shape of a boat filled with feta and mozzarella, topped off with a barely set egg which you dip the crust into.

Finally, the khinkali ($14 for 5 pieces, or $20 for 10) are a must. These hand-pinched beef/pork dumplings (also available in salmon and mushroom) explode when you bite into them -- much like xiaolongbao (Chinese soup dumplings), delivering a delectable coriander-spiked broth. The style, so I'm told, is to pick them up from the pinched top then bite into them while sucking out the broth. You then leave the top of the dumpling on your plate to show off how many you have eaten.

Apparently most of Georgia's food is interactive like this. You get to tear at bread and dunk stuff, you utilize the phkhali condiments on various things so you are always getting bites of vegetables while also adding textures and flavours. It's also all meant to be shared family style: "In Georgia, you don't normally order your own plate, you order for the table," said Henry, so bring a crew of at least three when you go. 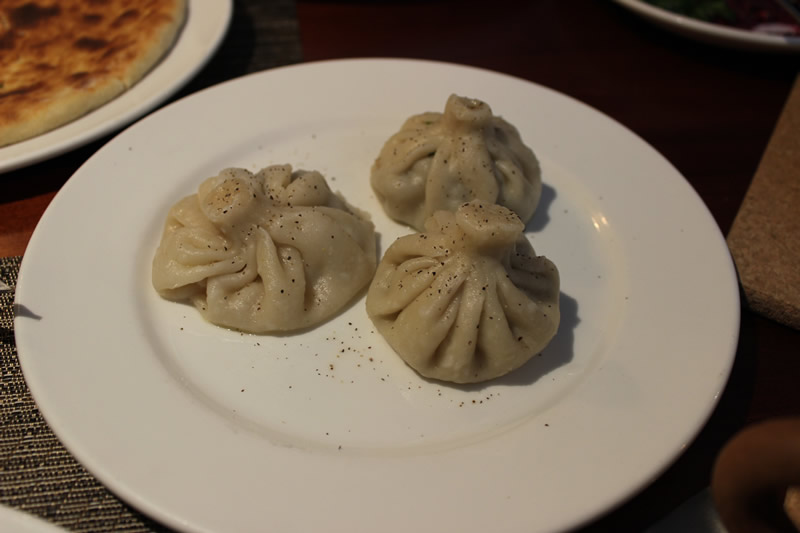 Georgia also is a proud wine-producing country, being perhaps the oldest wine-producing region in the world (the restaurant's namesake comes from its most-popular grape variety, which is used to make a dry red called Saperavi) and this restaurant is the only place in Winnipeg -- and indeed most of Canada -- where you can try Georgian varieties like Tibilisi, Tbilvino, and Saperavi (reds), along with Tbilvino, a dry white.

Both beers, along with the wine selection, will be perfect for their sunny, 55-seat patio this summer, where you'll soon find our office siping away while keeping a steady base of cheesy salty breads, vegetable spreads, soup-filled dumplings, heavily seasoned skewered meats, and a refreshing Georgian salad.

I'm getting excited just thinking about it.

Saperavi and Il Molino are located at 709 Corydon Avenue. Il Molino does catering as well, while reservations for dinner at Saperavi can be made at 204.416.3996.