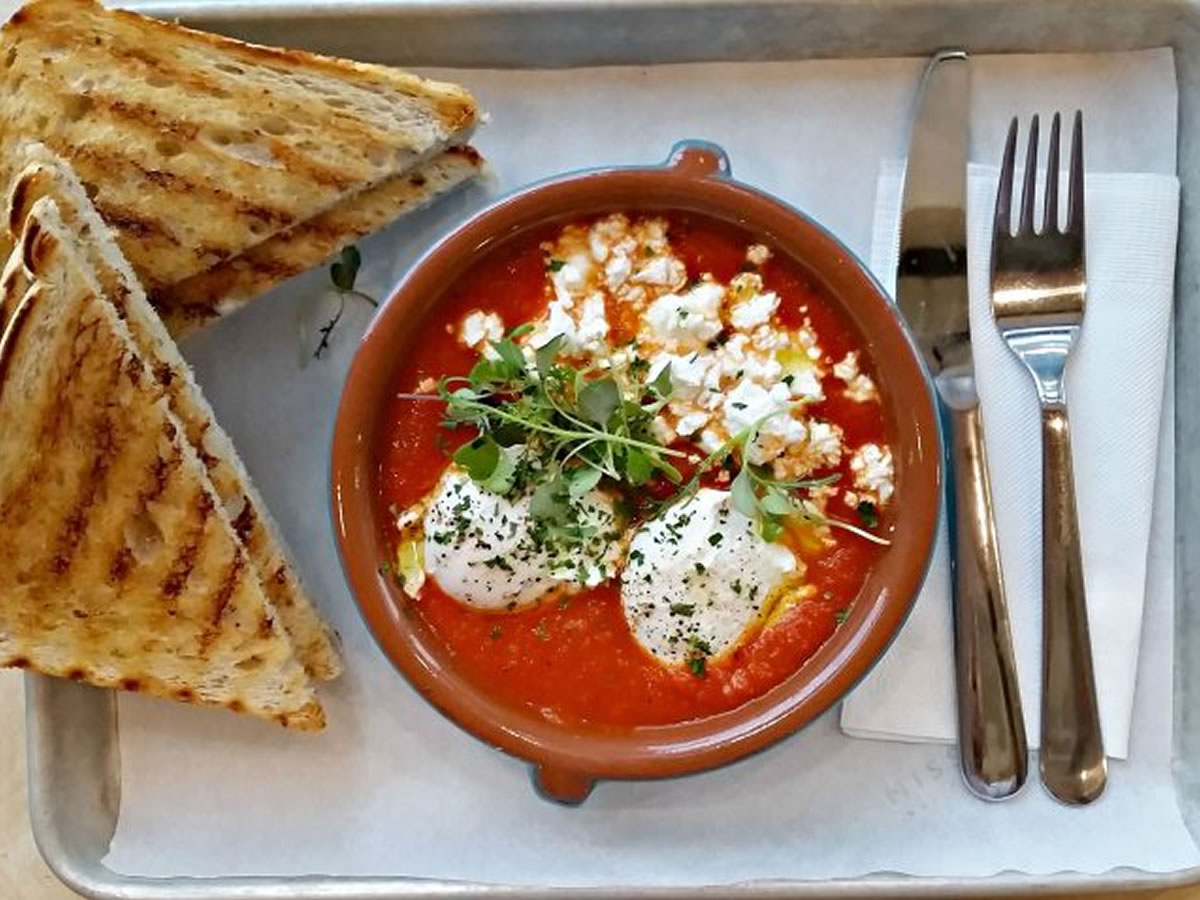 If our most-read articles are any indication, breakfast is popular with the people.

The last time we did a breakfast-only article was back in November 2013, and Winnipeg's Best Brekkies -- which features legends like Falafel Place and The Nook Diner -- remains one of our most regularly viewed articles, still getting daily hits over two years on.

But with so many exciting new options it only makes sense to do a second addition -- a more brunch-centric one that shows you where the cool kids (and you adorable families too) do their eating/hangover curing/Instagraming.

Let's start with this vibrant dish at the top of the article that you should order at Miss Browns (288 William Avenue, open Saturday 9 a.m. to 4 p.m. & Sunday 10 a.m. to 4 p.m. for all day brunch. They are also open Monday to Friday, 7:30 a.m. to 3 p.m.). It's called shakshuka ($10), a Middle Eastern dish composed of a spicy tomato broth with two poached eggs along with some salty feta and peppery micro greens. There's something brilliant about a creamy, rich egg yolk running into a tomato sauce that is kicked up with cumin, paprika and chilis. Plus, you get to eat it with a spoon, then sop it all up with toast; it's like cheating on your cereal with a much spicier morning lover -- one who entices with the added benefits of vitamin C and electrolytes that your body just might be needing after a night of partying. 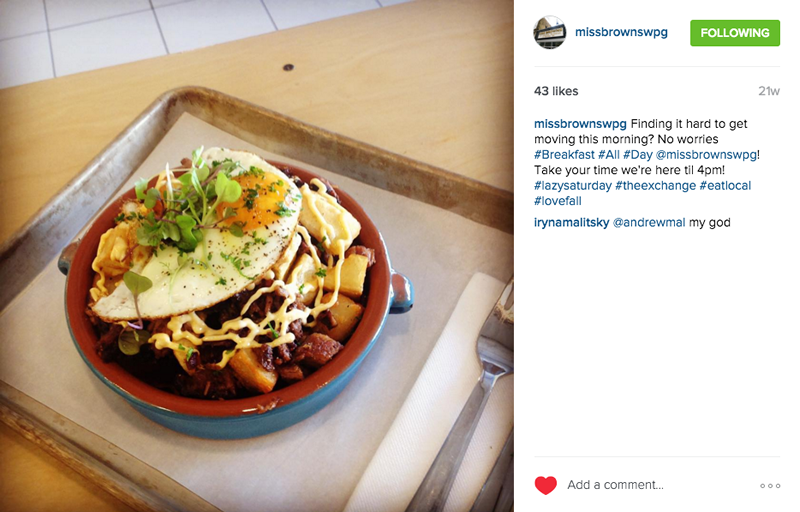 But the breakfast fun at Miss Browns doesn't just stop there. It is first and foremost a sandwich shop, so it only makes sense that their breakfast sammys put others in the city to shame. The Eggs Benny on a Bread Roll ($10) features a near pitch perfect Hollandaise (because it sings!), and house-ham (they smoke all their own meats), while their other breakfast sandwiches all have some form of aioli (because eggs with more eggs is where it is at) and micro greens. They also do specials of smoked meat hashes with cubed browns, aioli and a fried egg served in a cazuela that you can Instagram (like the above pic) in order to make your friends be all like #jelly #nomnom #iwantsit. 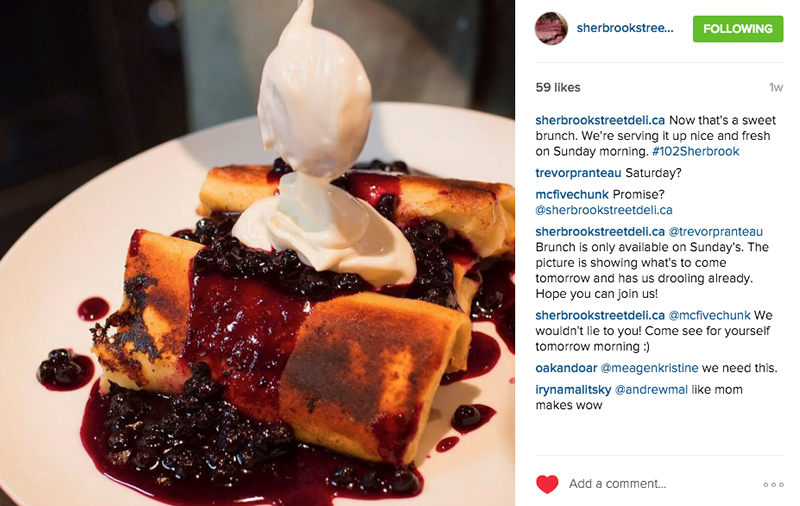 To stay thematic I'm going to throw a quick shoutout to Sherbrook Street Delicatessen (102 Sherbrook Street), as it is another Winnipeg place known for amazing sandwiches while often being overlooked as a breakfast/brunch destination -- which it now does on Saturday and Sunday.

They don't have a formal brunch menu per se, so the gist is this: you go in on the weekend (they open at 10 a.m.) and your server will tell you what exciting breakfast dishes chef Jon Hochman is putting together. 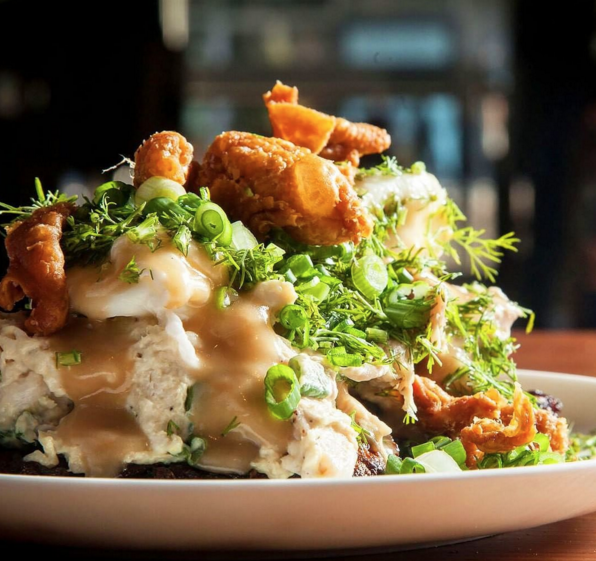 I recommend you bring a friend or a date to Sherbrook St. Deli, this way you can do the classic couple's breakfast order of, "you get sweet, I'll get savoury, then we'll switch halfway." In this, you get the best of both worlds:

On the sweet side, you gotta go for whatever blintzes they are doing, which are toothy and plump and topped off with a berry sauce and some whip cream. On the savoury side, go with whatever is going on with the latkes, like the above pictured masterpiece of two poached eggs, fried chicken skin and pulled chicken topped with dill, green onion and chicken gravy. (That's chicken four ways(!) eggs, skin, pulled, and gravy for those of you counting at home).

Right across the street is where the cool kids queue to brunch at the Tallest Poppy (103 Sherbrook Street, Monday to Thursday: 9am -11pm, Friday & Saturday: 8am - 11pm and Sunday 9am -9pm) -- who are fresh off doing a bang-up brunch service during RAW:almond, Winnipeg's winter pop up restaurant in a tent at The Forks. 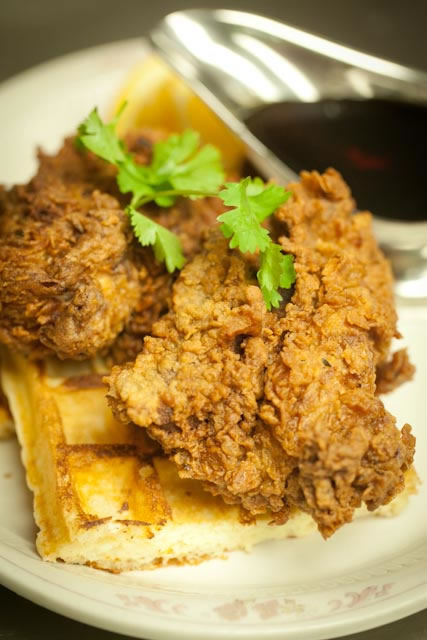 For starters, chef/owner Talia Syrie is like the unofficial comfort food queen of Winnipeg and she gets four gold stickers for her breakfast menu if only for having the most hilarious dish -- that being The Breakfast of Champions, which consists of two pieces of cold pizza, one caesar (the cocktail fool, and Tallest's is a fine version, as are all their drinks) and two Advil ($13.95) #winningwhenyouarelosing.

All that fun aside, you should look to two other great breakfast items, those being the Kale Breakfast ($9.95) -- featuring two poached eggs perched on sautéed kale, bacon, mushrooms, and onions with smashed baby potatoes, and the Chicken & Waffles ($13.95). The buttermilk fried chicken itself is a beauty (well seasoned and crispy on the outside, juicy in the middle) while the la bruxelloise waffle is actually made by Wafflelicious, aka Sébastien De Lazzer, who is from Belgium (so he knows his buttery batter). 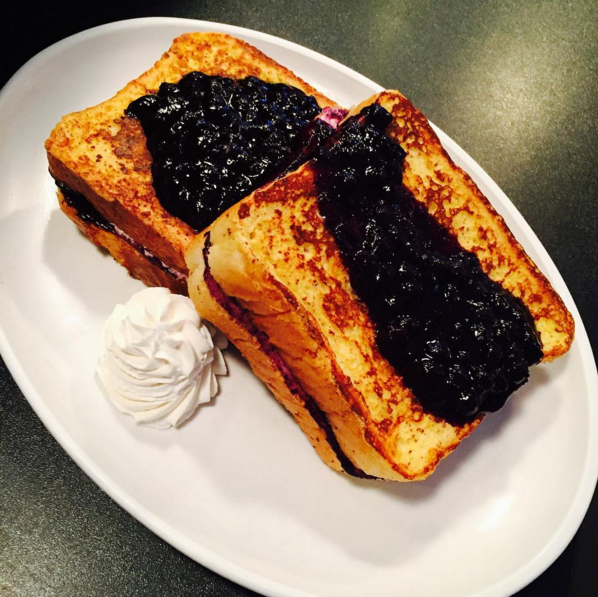 St. Boniface has a no shortage of great breakfasts too, with notables including Promenade Café and Wine (breakfast served until 11:30 a.m. weekdays, and noon on weekends) -- where the peaches and caramel crêpe ($10) is un bon petit-déjeuner sucré and Marion Street Eatery (breakfast Wednesday-Saturday, 7 a.m. - 10:45 a.m., Sunday 9 a.m. - 2 p.m.).

As Marion's brunch lineups will indicate, people really love this place -- and you will too after you hammer an Apple Whiskey Pancake Stack ($11.25). Also, you best look out for stuffed French toast specials like the above pictured blueberry cheesecake number because that sweet carb load will soak up all the previous night's sins.

My Winnipeg citizenship would be revoked if I were not to bring up Stella's (open at 7 a.m. around the city) -- which now has eight uniquely stylish locations across the city (well, seven right now as the Sherbrook Street one is closed due to a fire). The best thing about Stella's -- aside from the house-made jam and breads that people simply lose their minds over -- is that it is the best place to bring kids, even though they don't bend over backward for your little ones with a children's menu (children's menus are lame and are creating a generation of picky eaters -- there, I said it).

I for one always get the thin Norwegian style waffle ($6.50, which comes with Stella's jam and ice cream #somelikeitsweet) while surely the Mexican Breakfast ($10.95) is the most popular version of huevos rancheros in the city. 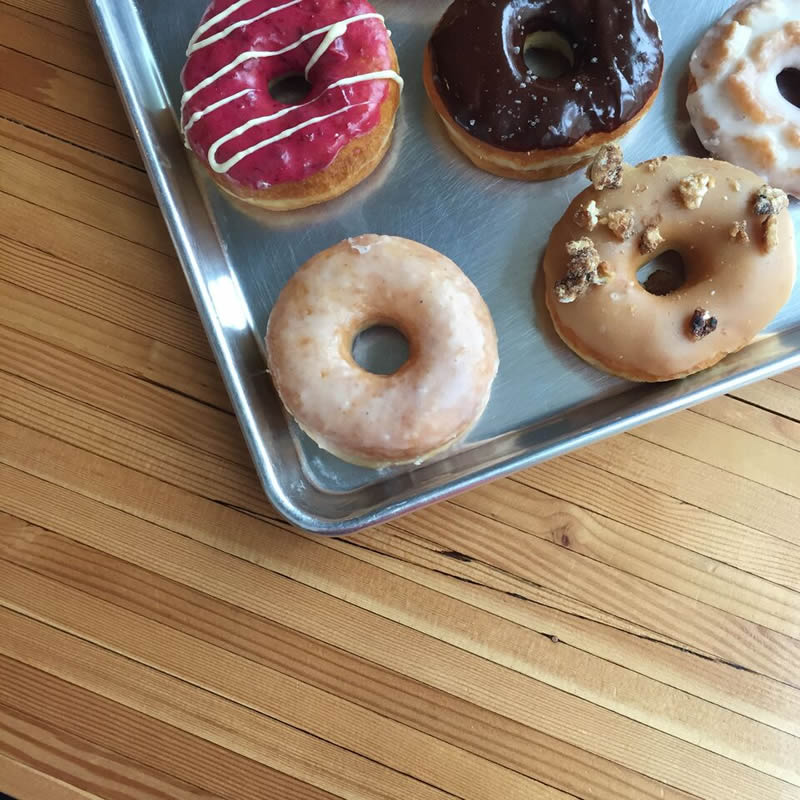 Finally, how about just a doughnut and a good cup of coffee for breakfast -- because really, there's only so much bacon, eggs, and hash browns one can regularly eat.

Surely your mum has told you at some point in your life that doughnuts do not constitute a breakfast. Well guess what, most of my friends are mums and they lie to their kids all the time, so just stick to your gut and go get that early morning doughnut from Bronuts (100 King Street), where the cloud-like cake doughnuts are topped off with fun, flavourful glazes that have cool names (for instance: "Scarlett - Crème Brûlée - No matter how hard you fall for this fiery lady, don’t you go calling her “sugar”.")

Note: that sexy shakshuka photo from Miss Browns at the top of the article was taken by our good friend Dan Clapson, who you should really follow on Instagram (@dansgoodside)