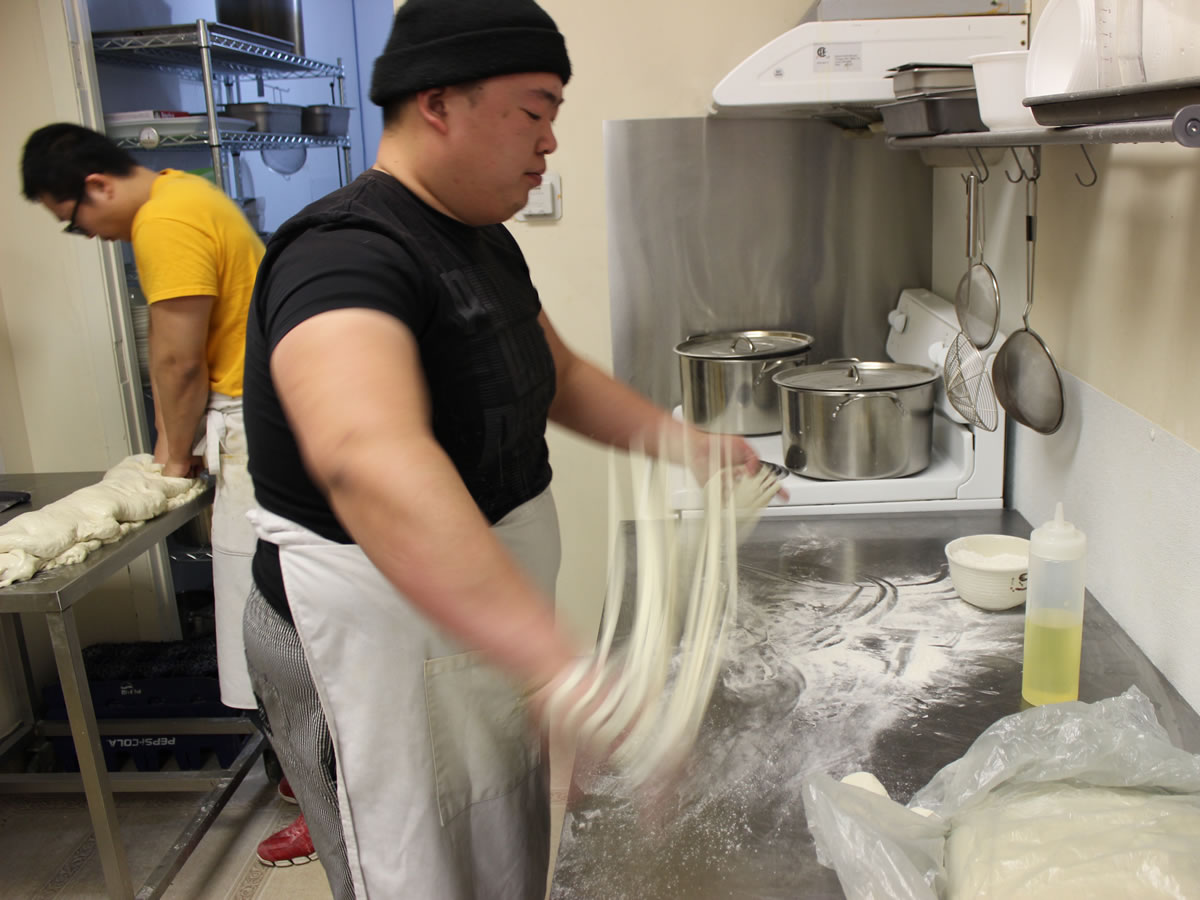 It might sound like a cliche, but anyone who has handled dough will tell you that there is a sort of magic in seeing its transformation.

Turning flour and water into a dough, then into bread or pasta, can make you feel like a magician. But when you see a guy form 256 noodles by making eight quick hand-pulled movements with dough, well that's when you know that there are magicians, and then there are wizards.

La mian noodle making is culinary wizardry at its finest, and one of the only shows in town is at Dancing Noodle (1393 Pembina Hwy), a little beef-noodle soup shop where chef Xiaofei Zuo is hand-pulling outrageously toothy noodles over a hundred times a day.

It only opened in November and already it has garnered a devout following -- like hobbits to Zuo's Gandalf -- for both the Dancing Noodle show and the fact that the soup is so incredibly good (#youshallnotpass up on his soup).

"Last year I went back to China -- to Lanzhou, and I found a school to learn how to pull la mian noodle," said Zuo. "So I took this program for two months, but after two months you just have the tips as to how to make it."

Just watch the videos above and below, the technique is ridiculous and nearly impossible to follow. With six pulls (the above video) he has about 64 noodles with the thickness the equivalent of a Japanese udon -- which has a fabulous chewy texture and takes about 90 seconds to cook in boiling water. In the video below, you'll notice he does nine pulls (give or take) that results in noodles with a thinness equivalent to angel hair pasta -- which gets cooked in around ten seconds. (Zuo says he can even pull to about the thinness of your hair).

It's hypnotic stuff, and each bowl is made this way, with customers getting the choice of thin, medium, thick or flat noodles, all of which gets topped off with his aromatic beef broth along with house-made sesame chili paste oil (which smells incredible), green onion, cilantro, and thin slices of stewed beef. The whole place smells of this broth, a tantalizing mix of cumin, star anise, and loads of other aromatics.

"There's more than 40 kinds of spice in the soup -- a lot of it is Chinese herbs -- and it's like a magic," said Zuo. "This broth, it's a bit different then the one we came up with in China because it is hard to find the right herbs and spice, so I've been tasting, tasting all the time -- but finally I get there."

"All the herb have different function, some can make you warm, some make you feel healthy, it's especially good in the winter time because you eat the noodle, you drink the soup, and you feel like you won't feel the cold outside." (I'm seriously in love with this guy). 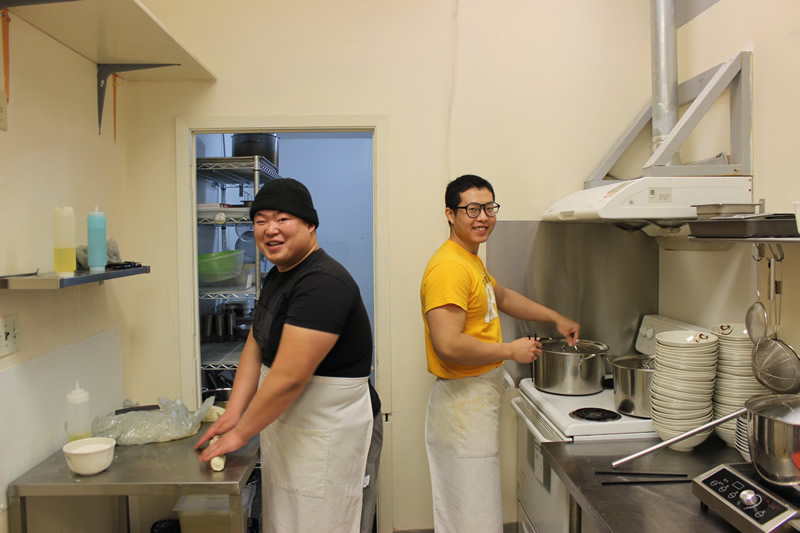 Zuo is from Tianjin, China, and where he learned the art of hand-pulled noodle, in the city of Lanzhou, is where this style comes from. He said most of his teachers have been noodle-making for over 40 years. He moved to Winnipeg in 2011 -- long story short, he had a neighbour in Tianjin who had lived in Winnipeg and loved it and told Zuo that it is a nice city.

"Tianjin is cold too, so the winter is no problem here," said Zuo.

Once in Winnipeg, Zuo enrolled in and graduated from the Culinary Arts at Red River College where he took the professional baking program. (During that time he had worked with chef Ben Kramer, a mutual friend who first told me about Xiaofei and helped him build up his client base after putting a video of him pulling noodle up on Instagram). 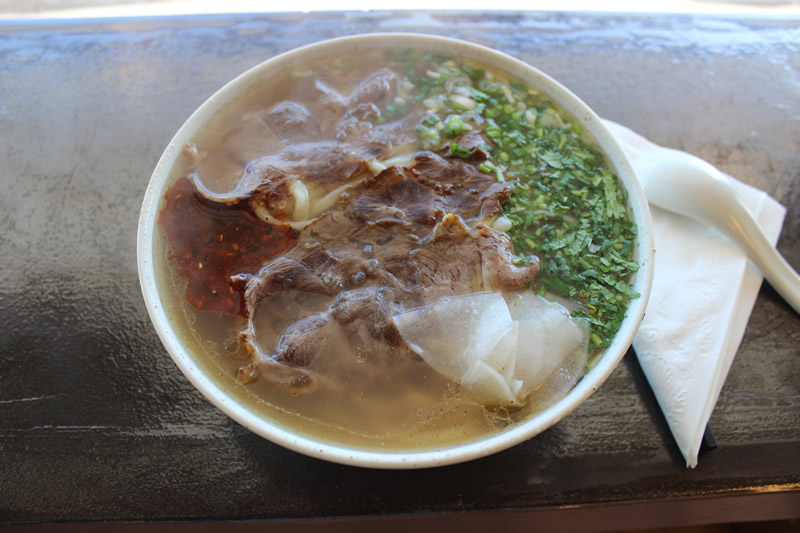 The flour is all-purpose, and the only other two ingredients are water and sodium carbonate (like a good ramen noodle), but, as Zuo says, "the flour doesn't matter, it depends on your skills."

"For really experienced people, to pull la mian noodle, it doesn't matter what type of flour you use, because it is all in the feeling. Once you pull it, you'll feel if it is soft, or you'll feel if it is hard -- then it is all how you work it. Your ten fingers each have purpose, you use all of them, and you adjust as you play with the flour."

In the morning they use 10 kg of flour -- with assistant Ryan Zao, whose forearms are massive, helping bring together the dough -- and in the afternoon, another 10 kg. Mondays are the busiest, with Thursdays being the quietest.

Zuo has intentionally kept his offerings limited, as he wants everything to be of the highest standard. When they are closed on Sundays he spends his day going to six different markets for all the ingredients, including one particular stop just for daikon. 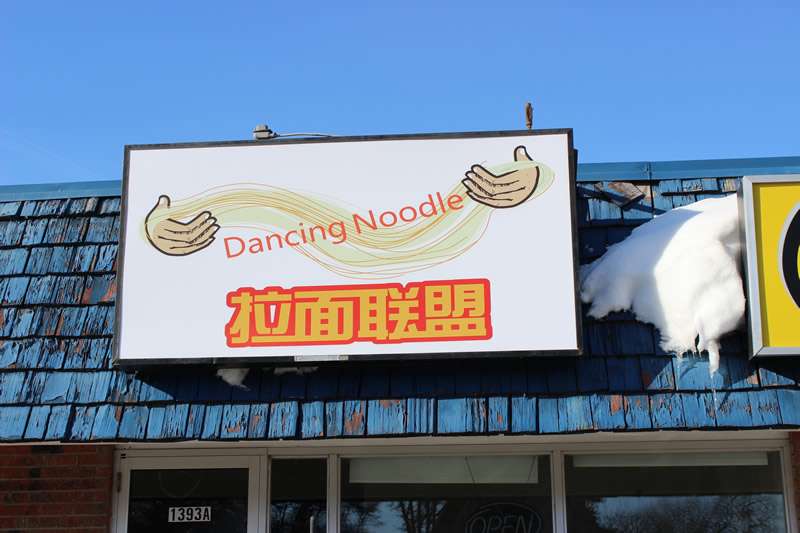 It all adds up to an eating experience unlike anywhere else in the city; real soul-feeding food that is prepared for you in a matter of minutes (it only takes a couple minutes to make one bowl, depending on how thick you like your noodle). The room is spartan as far as decor is concerned, with just four small tables and four bar stools at the front window, but you won't care -- all the ambiance you need is in that steamy, delicious bowl of Lanzhou beef noodle soup.