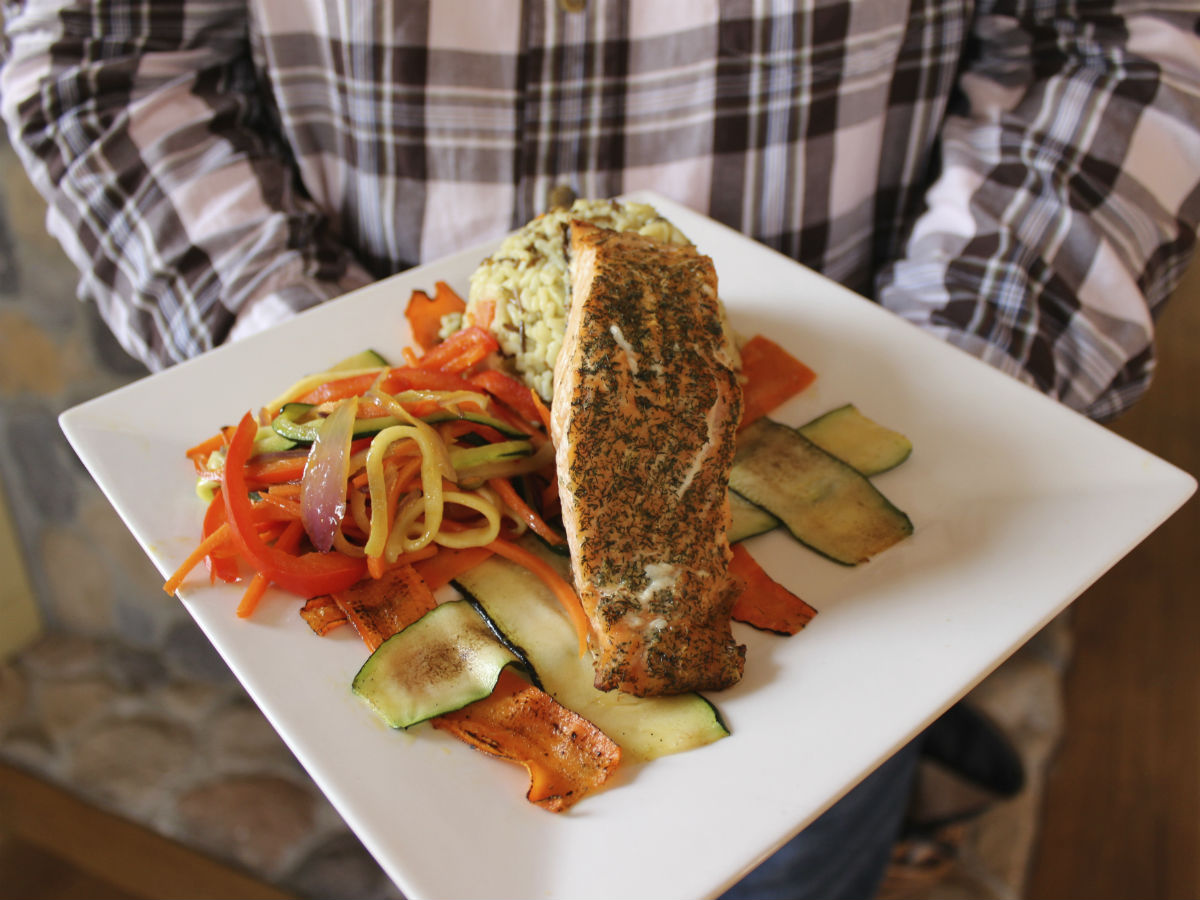 Savoury Salmon resting upon a bed of linguica peppers and onions

"It's like opening up a restaurant with no reservations, and you may do forty people or you may do a thousand... and that's what Louis Riel Day is always like for us at Festival du Voyageur," said Shawn Brandson, who along with his wife Connie McKane-Brandson runs Fort Gibraltar Dining Corporation.

Three years ago Shawn and Connie were serving food at FDV out of a food truck on a rather nasty Louis Riel Day.

"The winds were so high that we couldn't even have signage out as there was a risk of it flying through the park and impaling someone -- and that was the first experience we had," jokes Shawn.

"The second year it was plus two degrees and it felt like everyone in the city came. We had nine employees working each side of the tent, while the chefs were constantly cooking from the start to the end, and we ended up selling more on that one day then we did all Festival -- and it was a very busy Festival," Shawn continued. 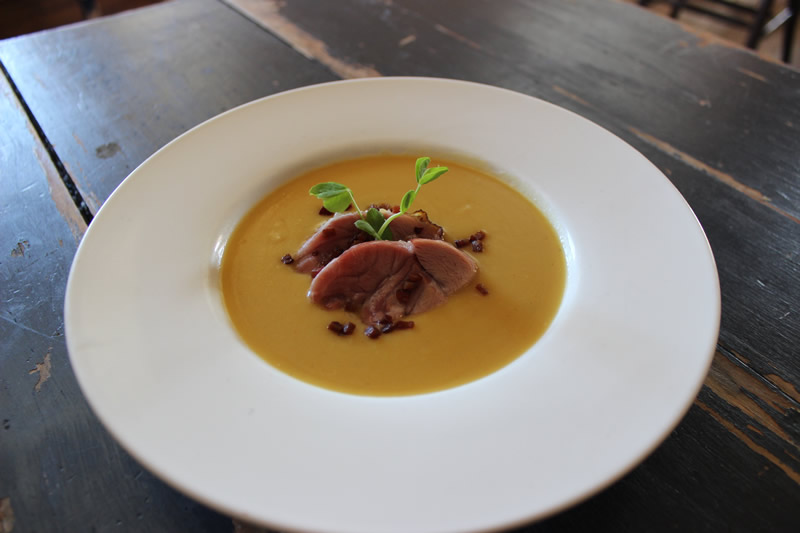 Throughout FDV (which starts this Friday, February 12 and runs until February 21) Shawn, Connie and their team will be serving up lunches and dinners in the Great Hall of la Maison du Bourgeois along with food in the Pembina and Snow Tents representing their celebrated St. Boniface restaurant Promenade Cafe and Wine. (Here's a handy map of Voyageur Park).

The couple, along with their executive chef Beau Schell, also do the food at Provisions at Lower Fort Garry -- making it a pretty busy four-season operation between weddings, the restaurant and special events.

This year, Louis Riel Day (Monday, Feb. 15) is looking pretty balmy at -7°C, so Shawn and Connie are expecting to be slammed, but any FDV veteran knows that a little cold weather never stops the party. The tents are all heated, and things always get nice and toasty when the dance floor (covered in straw) gets going. Plus, you have so many options of stick-to-your-ribs French food that is tailored to keep you warm. 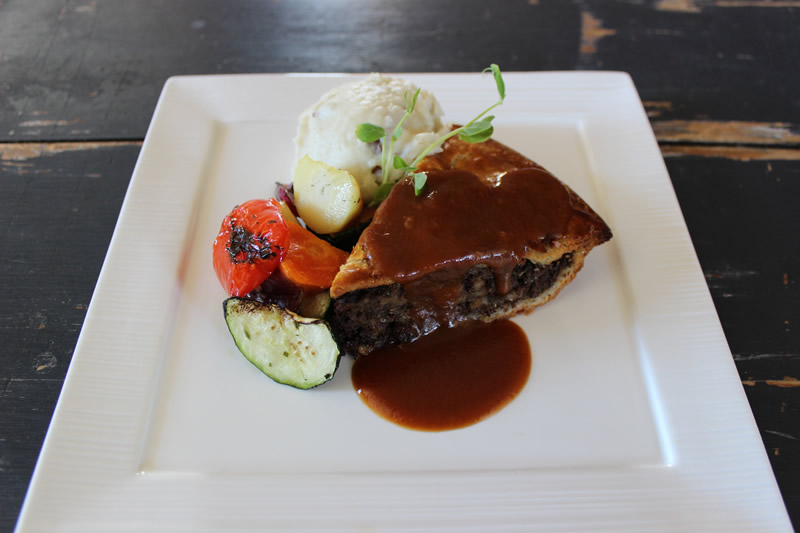 On the weekends (and Louis Riel Day -- full dining schedule here) you can "dine a la Maison du Bourgeois" for only $15 for lunch, or $18 for dinner, which gets you two courses. I highly recommend adding on a Quebec maple syrup sugar pie at the end for $6 (you'll thank me if you do).

Inside the Great Hall you can start with a Partner's salad -- which features baby field greens, a maple balsamic vinaigrette, granola and cranberries, or French Canadian pea soup. Entrées include a big slice of tourtière covered in a rich gravy, "beef bourgeois" (a play on boeuf bourguignon featuring braised chuck with mushrooms and red wine) along with a vegetarian option of ratatouille-filled crêpes with pesto cream sauce (but lord knows the voyageurs weren't exactly known for eating their veggies). The tourtière and braised beef are both served with a scoop of crazy-rich mashed potatoes -- which is where all that incredible Notre Dame Creamy Butter goes.

This year they are also doing a Voyageur Caesar in the Great Hall that features a brown sugar bacon crumble rim (oh, baby), a shot of Caribou, a shot of rye whisky, Clamato and lime garnished with a gherkin, pickled asparagus and a crispy slice of brown sugar bacon ($8). I had one yesterday for lunch and it is superb; the Caribou gives it a sangria-like element that gets the back of the palette while surely the fur traders would have taken rye and bacon over vodka and celery. #heho 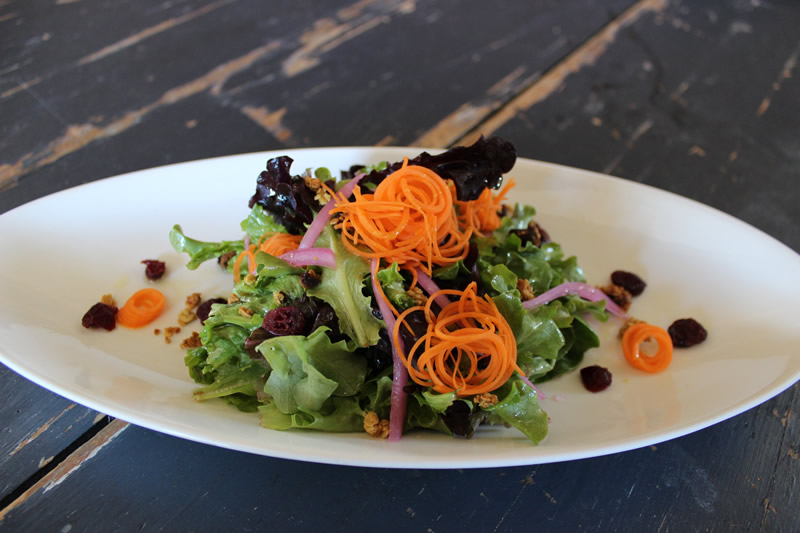 Inside the Pembina and Snow Tents is where you can find all of the Promenade creations -- which you better enjoy (and I guarantee you will) as it is the only aspect of FDV that Connie doesn't love.

"Running the food from the kitchen to the tent is the most tedious thing," said Connie, regarding the fact that all their food is made from scratch in the Fort Gibraltar kitchen. "I end up being the runner and I don't like it," she jokes.

The biggest seller in the tents is the mash potato poutine ($7) which Connie exclaims, "we are well known for." #butter.

Toppings include pulled pork, tourtière (the filling, sans pie crust) or vegetarian -- all of which gets covered with gravy, cheddar cheese and onion. It is the ideal fuel for jigging it up on the dance floor and I recommend ordering it with an ice cold beer and some Caribou served in an ice glass. 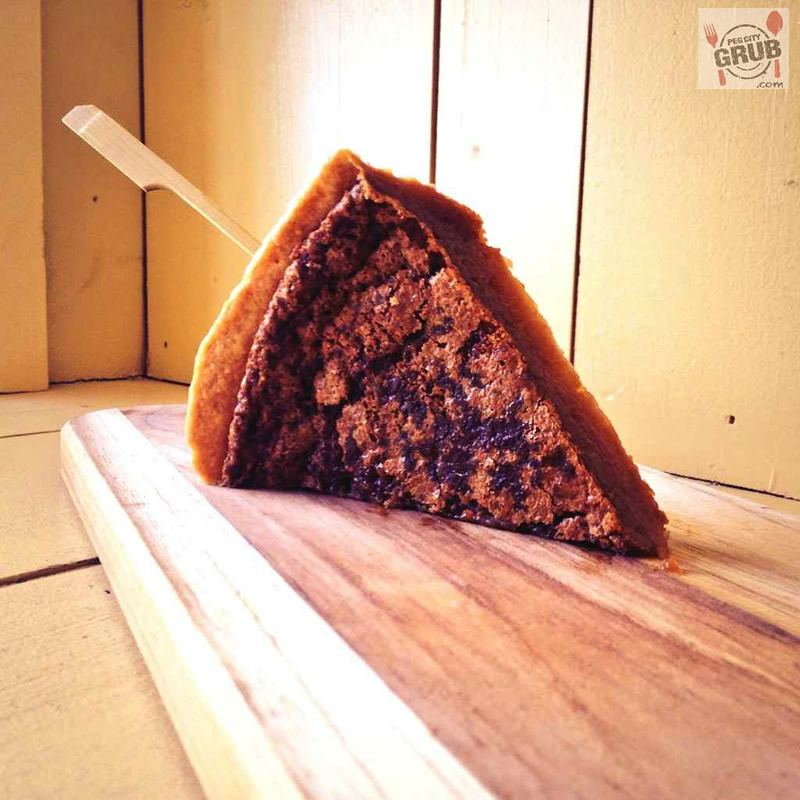 The Pembina and Snow Tents also feature pea soup ($5), maple baked beans ($5, new this year and vegetarian), a pulled pork sandwich with slaw and pickled red onion ($6, which is the bomb), along with the fabulously aggressive Touritère Dog ($7) and Pork Eater Sandwich (a hot dog with pulled pork, bacon crumble and coleslaw ($7)). (You can check out the full menu here).

Possibly my favourite in the tents is the smoked turkey leg ($10), which executive chef Beau Schell outlines as, "brined for 24 hours, braised for 5 hours in turkey stock and brown sugar, then smoked for only an hour, to give it a light smoke." The result is the sort of grab-and-tear rugged food a voyageur deserves, while the meat itself is confit-tender.

To see how some of this food gets made you should check out the new series on Shaw TV by Lucky 9 Productions called Rustic Meals. Chef Schell and Shawn are featured in the first episode where Schell cooks over the Great Hall's fireplace and Shawn makes that awesome Caesar (along with other tasty bits). It will get you pumped -- and hungry -- for the upcoming festivities.