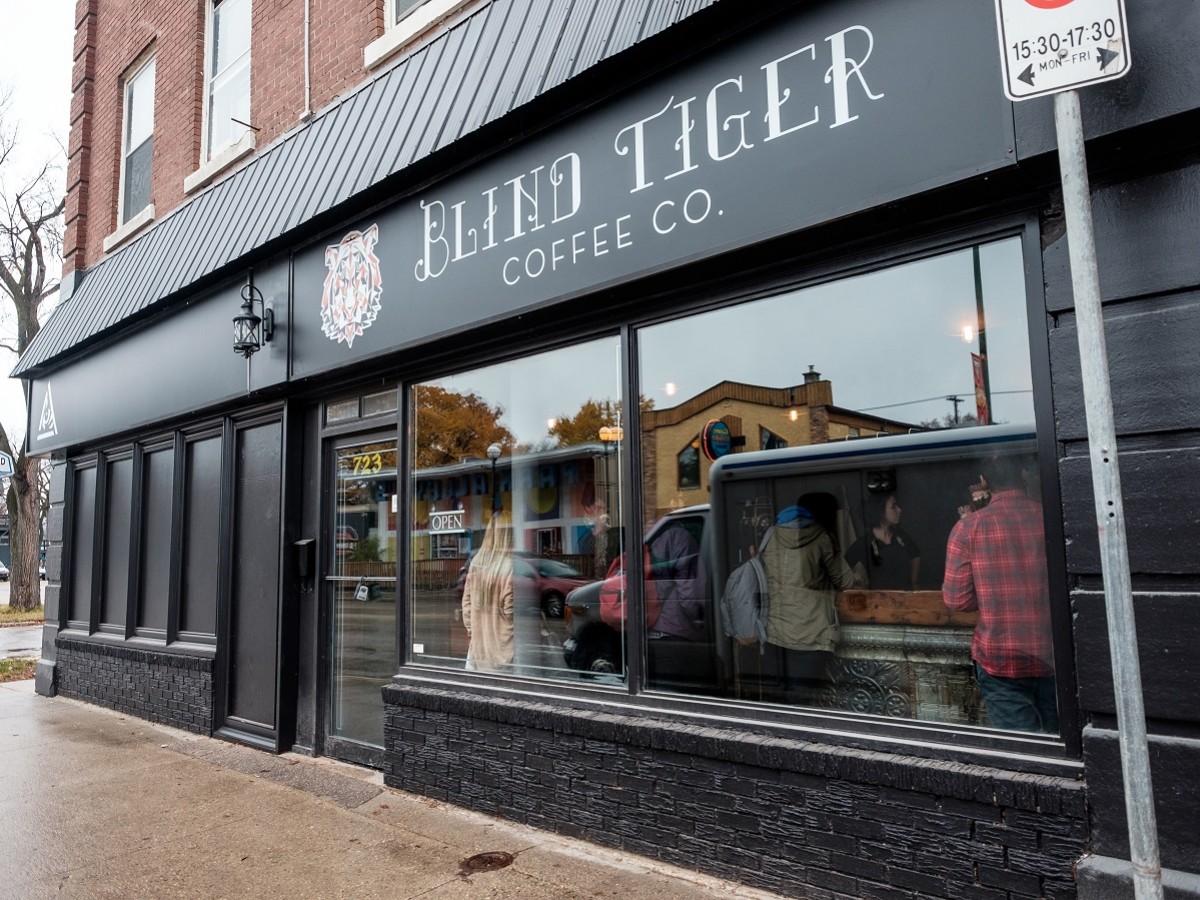 Blind Tiger, the coffee shop by day, whose hidden door reveals a bistro and cocktail den by night, is easily one of the handsomest rooms in the city.

So much so that you forget that Bistro 7 1/4, formerly one of Winnipeg's most-popular restaurants, was once was located in this same space.

Owner Jack Moslehi, whose Winnipeg entrepreneurial background includes the former nightclubs Republic and Opera Ultralounge -- which has now been turned into 441 Main (of which he is a partner in) -- along with mainstay Fame, took over the space in 2015 and spent five months with a team of carpenters completely reforming it into a speakeasy setting.

Moslehi also has had ventures in Jaco, Costa Rica, Vancouver, BC, and other worldly places. He's a soft spoken fellow, and not to sound cheesy, but you get the impression when you see him interact with his staff that they like working for him. He also, as is apparent at Blind Tiger, has a keen eye for design. 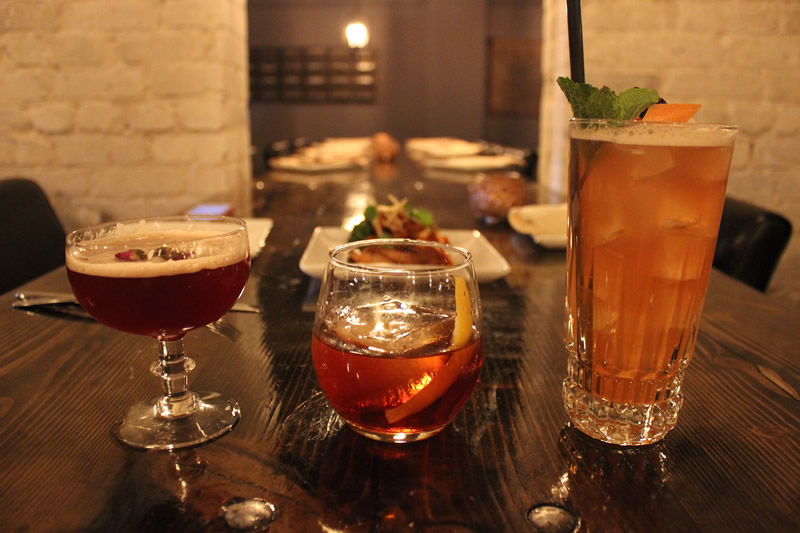 Cocktails from left: the Mata Hari, the Kentucky Unicorn, the Lady Elaine (PCG)

Their first project was to unify the two restaurant spaces -- the old layout had two separate rooms, with an open kitchen on one side and the bar on the other, which are pretty much the only two elements that survived the transition. Then they immediately started taking all the plaster off the walls and procuring antiques from stores in Winnipeg and barns from outside the city.

Some of the particularly cool pieces include the guts from a piano that adorn one wall, whose hammers have been made into a separate piece above the bar, along with a little lounge space that has a bookshelf above it made from old wooden ladders.

The front coffee counter (which starts serving espressos at 7 a.m. until 3 p.m.; closed on Sundays), opened in October, while the back, speakeasy side (serving Tuesday to Saturday, from 5 p.m.- 2 a.m.; Sundays until midnight) opened in November.

But this is a food and drink blog -- not a design one -- so let's start with the drink program. 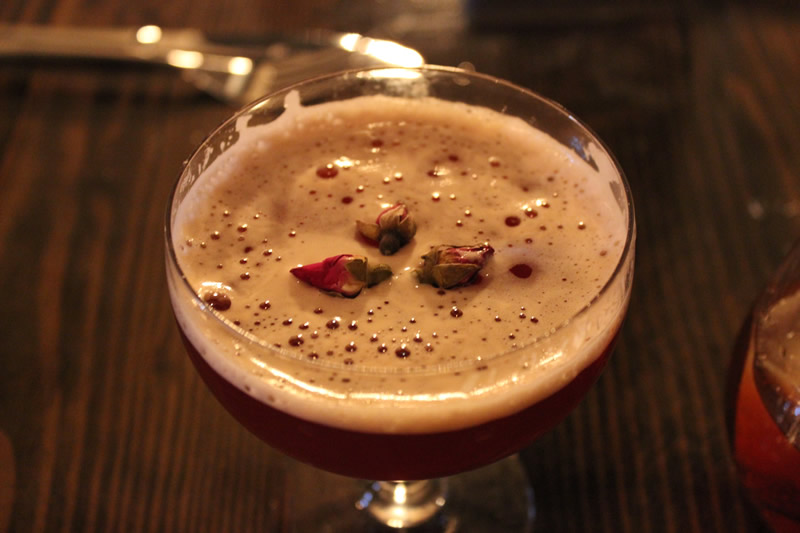 “The cocktails are ridiculous; I’m going to be so bold as to say that they are some of the best in the city,” said Moslehi.

After sipping through some of the creations from barman Alex Weiss (pictured at top of article), I'm inclined to agree.

For starters there is the Mata Hari (a drink from NYC) made with Hennessy, chai-infused Cinzano, pomegranate juice, lemon juice and a bit of sugar garnished with dried roses. It's a fine balance between tart and sweet, with warm spice notes from the chai vermouth. Then there is the super refreshing Lady Elaine -- an Alex original -- that features rye whisky, earl grey tea concentrate, grapefruit juice, lemon juice, and cardamon bitters that gets garnished with mint. This drink is just begging for a hot summer's day, although sipping away at it at the end of January nearly takes you there. 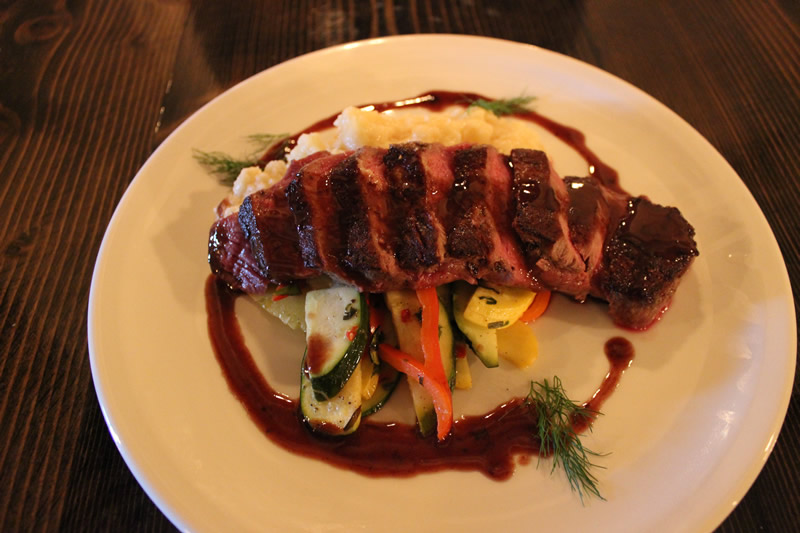 I also enjoyed the Kentucky Unicorn which is like a really smooth old fashioned without that extra boozy bite. It has Bulleit Bourbon, Cynar (a bitter liqueur made from artichoke and a host of herbs and plants), peach syrup and Peychaud's Bitters, and is garnished with a lemon peel.

The French food is of a high calibre too, particularly the sauce making.

A real gem is the hanger steak ($21) which comes served beautifully rare with a bordelaise sauce that will have you licking the plate. The cut I had was very tender and well-seasoned, while the sauce's richness (it's made with bone marrow and demi-glace) had a solid amount of acidity from the wine to round out the flavour. It's served on a buttery parsnip puree along with some sautéed vegetables. 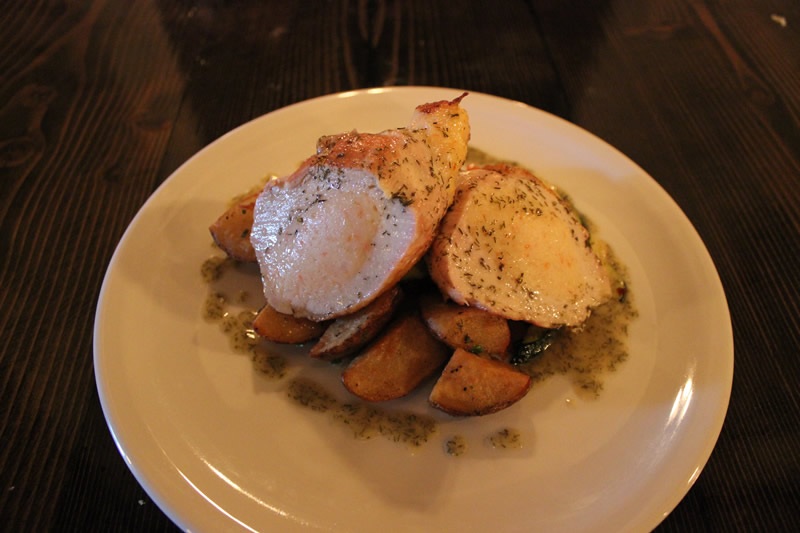 The same can be said of the stuffed chicken breast ($23), a dish I would not normally gravitate toward as I'm more of a thigh kinda guy, but which won me over. As you can see above it comes glisteningly moist through and through, stuffed with a shrimp mousse and accompanied by a dill beurre blanc that is quite bright on the palate.

For an appetizer there was a real ginger-rama of a dish featuring pan seared prawns served atop a carrot and ginger puree with ginger stewed tomato and a handful of pickled kale. Again, there are nice bright acid notes to the dish that are really harmonious with all the other elements.

The pickled kale in particular is excellent, and something that would work well on a variety of rich dishes. The cook of the shrimp was good, the stewed tomatoes carried an element of sweetness, and everywhere you went on the plate were assertive bites of ginger. There was also a great deal of textures going on; altogether a well-executed dish. 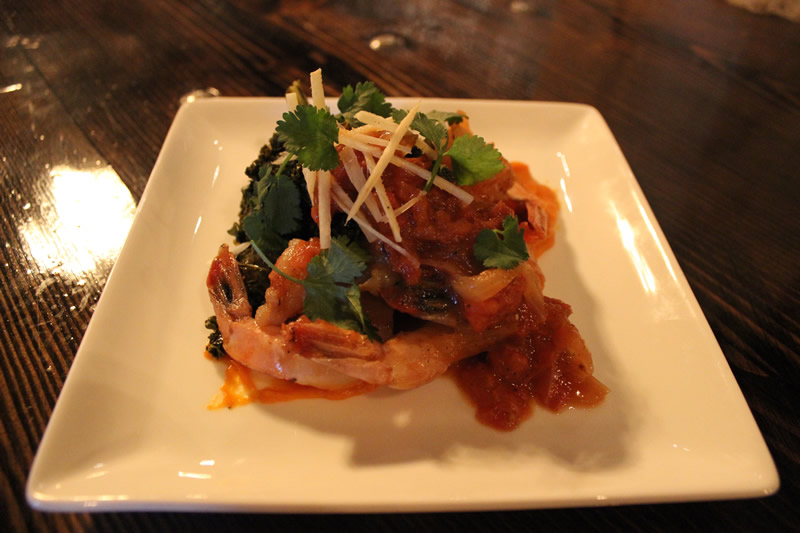 The menu is nice and tight by design -- which is a smart play for a young restaurant, while Moslehi said that some items will soon be replaced by others. They are also now looking at extending the speakeasy/restaurant hours to include a lunch service, which surely the neighbourhood would appreciate.

It's already a lively spot at night and it can -- and only should -- get busier as this is one slick room with excellent cocktails and a food program that is really starting to impress.

Next time you have friends in town and they want to go to a truly cool space, open their eyes to the Blind Tiger.

Blind Tiger is located at 725 Osborne St. For reservations call 204.691.9939 or use their online reservation system.