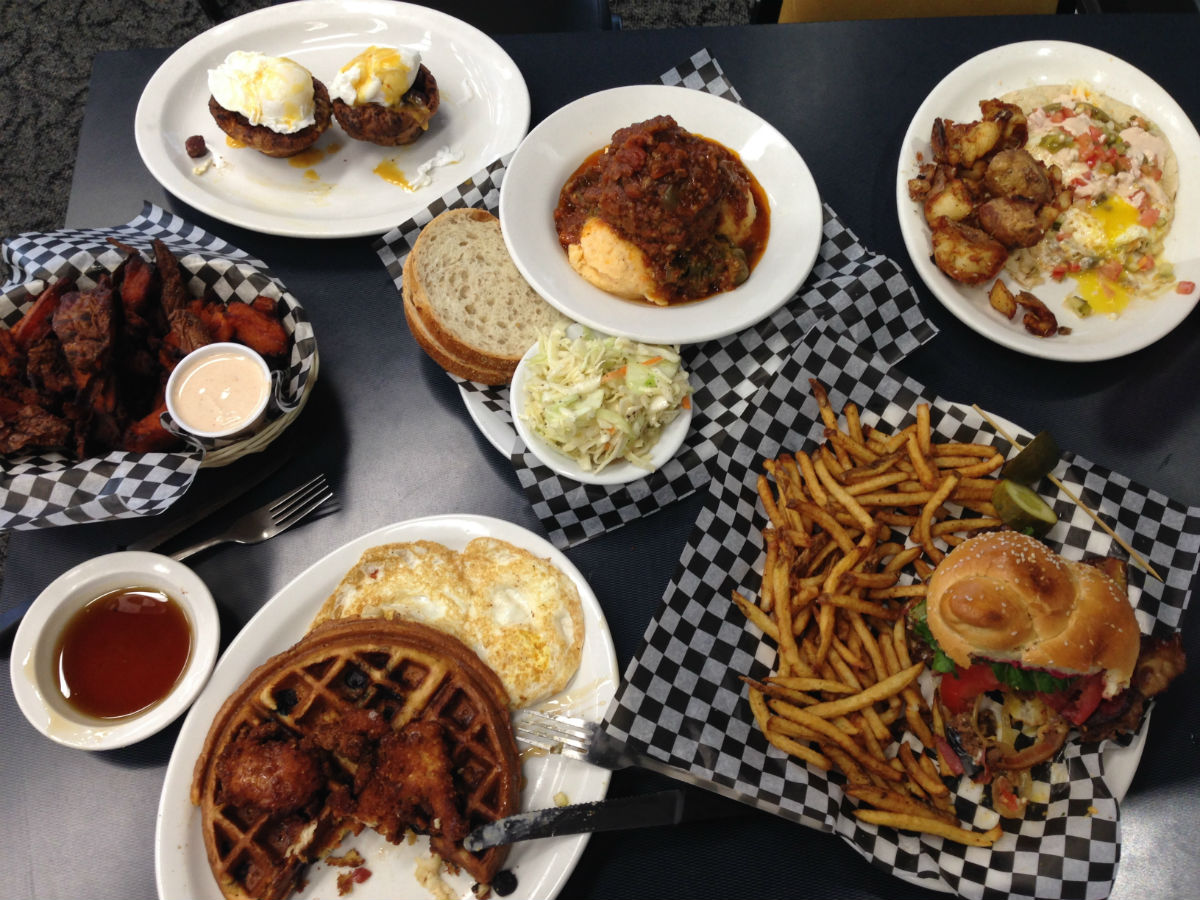 Oscar's Deli is brimming with history and great comfort food

I'm willing to guess that when Oscar's Deli first opened nearly 90 years ago they were not serving a two-patty behemoth with bacon, pastrami, salami, and a fried egg called the "Dirty Burger." But times, they change.

"Oscar Berman first opened Oscar's Deli in 1929 and it changed hands a few times until the Ludwigs took it over shortly after World War Two," said Oscar's Deli owner Larry Brown, who gave me an abbreviated history of the place as plate after plate of comfort food was coming at me.

"The Ludwigs owned it until the '70s, then they sold it to their nephew Jimmy, who was a good friend of mine," said Brown. "In the '70s I was already working in the food business with my father-in-law in who was a kosher butcher, so when my friend Jimmy took over Oscar's from his uncles I was already spending a bit of time there. So it was just a natural progression [that I would take it over]"

Brown eventually bought Oscar's in 1979, after previously being offered the chance to do so in 1971. 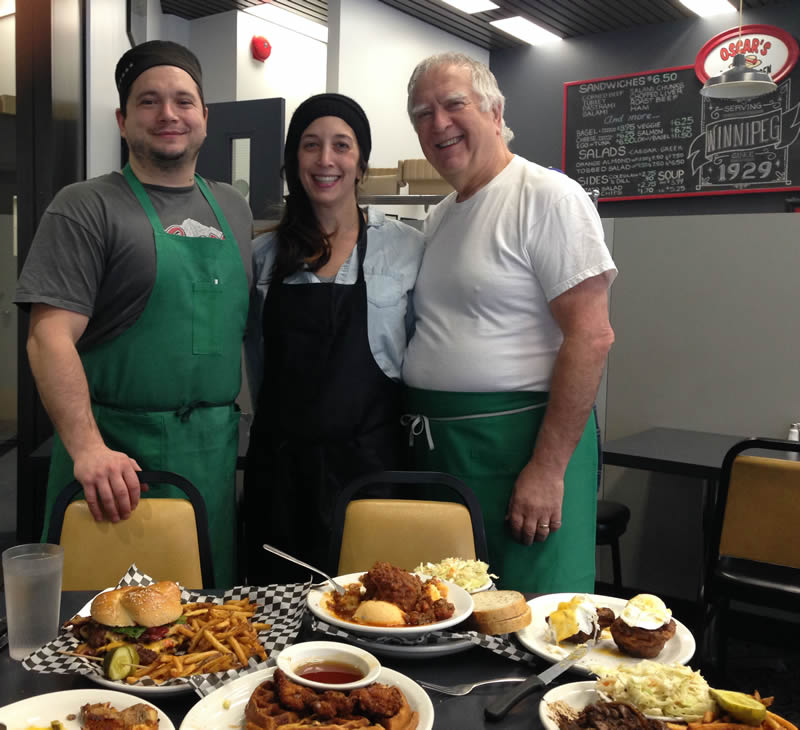 In 1982 he moved it to this location at 175 Hargrave Street, right beside the RBC Convention Centre in the heart of downtown Winnipeg.

"I still get a couple guys who come in who used to work as teens at the original Oscar's on Main Street, who used to bring the glass pop bottles in wooden crates up from the basement," said Brown.

"Back then, up until the mid-'70s, it was strictly corned beef, salami, and pastrami sandwiches, along with pickles and drinks,"

Brown now works alongside his daughter Rachel -- who cooks and jokes that she has been clearing tables since the age of four and waitressing since 16 -- along with Hari Haidau, who came on as a chef in March of this year.

Nearly forty years on the corned beef and pastrami are still the top sellers, but I was there to be put through the paces by the new brunch and dinner menu, which the Oscar's crew is hoping will bring added crowds for their newly expanded hours. 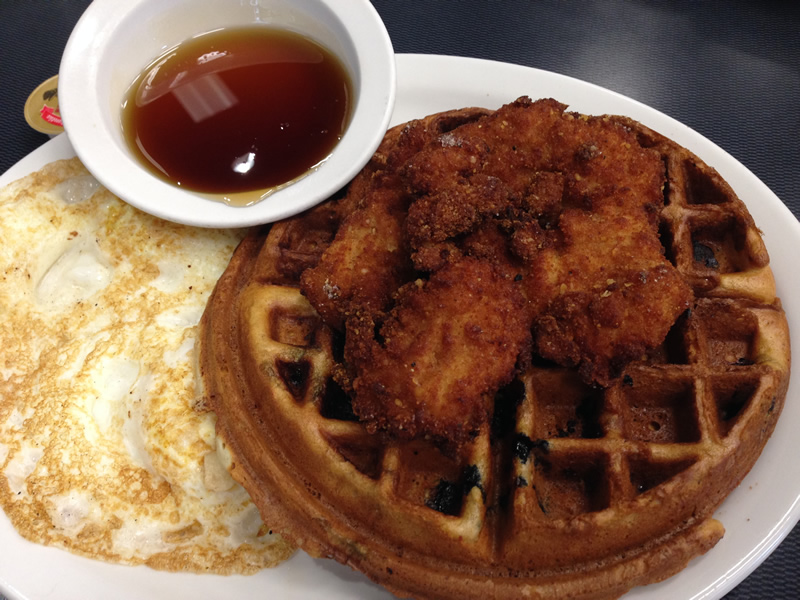 Let's start with the brunch dishes (available Saturdays), which includes a chicken schnitzel and waffle, a Yorkshire pudding eggs Benedict (the Yorkie breakfast), and a Mexican-style breakfast with fried eggs and pico de gallo on local La Cocina tortillas with an adobo cream sauce.

The play on chicken and waffle is delicious, if not for the faint of heart. The waffle batter contains candied bacon (yes, there is now plenty of pork on the menu, including all-you-can-eat ribs for dinner on Jets' home games) and blueberries, while the chicken is pounded flat then marinated in buttermilk for a couple days before getting battered in matzo meal. It all gets served with a healthy amount of bourbon maple syrup and an optional two fried eggs, in case you really want to get a serious start to your Saturday morning. 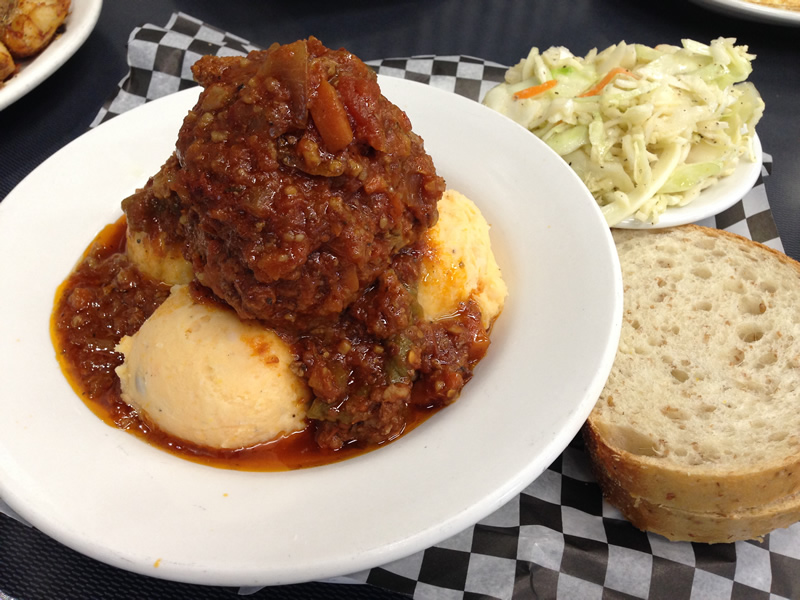 The Yorkie breakfast is also a pretty great study in morning gluttony. The cup of the Yorkshire contains both ham and salami, along with garlic, onion, a red wine reduction and chicken gravy, while the runny poached egg is covered in an ancho chili hollandaise. If you are counting at home this is indeed a three sauce benny (four if you count the runny egg) that will keep you warm on a weekend winter's morn. You can get it with rosemary smashed potatoes that are crispy on the outside, fluffy in the middle, and ideal for your three sauce mopping.

"What we are making is food we all love," said chef Haidau. "It's food that will fill you up -- we'll obviously lighten it up come summer -- but for now it will stick to your bones."

The gauntlet my appetite ran continued onto the dinner menu that saw a massive stuffed bell pepper overflowing with meaty chili sitting on top of three hefty scoops of cheesy mash. It was hearty, sure, but I dare say not over the top with richness as I had anticipated. The mash was whipped to an airy texture, the chili was well seasoned and flavourful, while the accompanying coleslaw had all the needed acidity and crunch (I poured mine right on top of that meaty mountain and went to town).

I'm telling you fans that are in town for the Grey Cup right now: this is what you need to lay the base down before adventuring out to discover Winnipeg's bar scene. 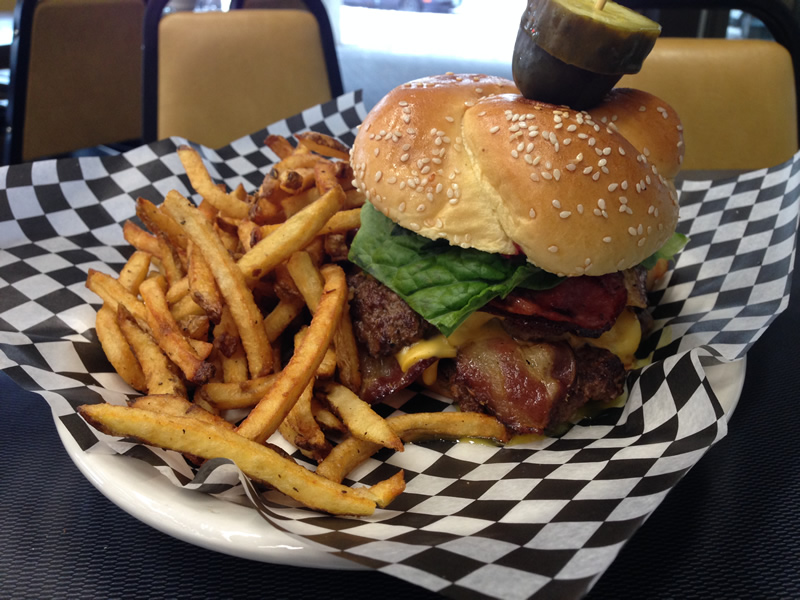 Finally, we come to the Dirty Burger, which customer's demanded stay on the menu after Burger Week 2015 -- and for good reason. When they bring this bad boy out it should be accompanied by a theme song like an '80s wrestler (preferably something quite grand, like Macho Man when he walked out to "Pomp and Circumstance"). It features with a challah bun slathered in a horseradish sauce, lettuce, caramelized onions, two thin patties of ground chuck, bacon, pastrami, salami and a fried egg with a running yolk.

Now before you say, "dear god, that is too much burger to handle" I assure you it is manageable. I was able to two-hand it and get my teeth into it just fine while the richness did not put me down for the count. The juicy chuck patties have a zesty seasoning to them, the horseradish sauce adds that needed zing, and the meat-to-bun ratio (which is so important in a burger) was spot on.

Despite its seemingly imposing stature, this is one of the best burgers in Winnipeg, and one I will be back for soon for my next burger craving. The fries are awesome too; the potatoes are pressed on the second smallest fry cutter setting making for a crispness that gives you that satisfying crunch sound when you snap them.

Yes, my meal may have sounded a little over the top for lighter eaters, but it was a menu sampling and I still managed a yoga class at 5 p.m. after this epic lunch at 1:30 p.m. Plus, Oscar's still has salads and lighter fare on the menu too, while that fabulous, vinegary coleslaw that comes with nearly everything is meant to cut through all that richness.

Oscar's Deli is located at 175 Hargrave Street and is licensed with beer and wine. It is open 7 a.m. to 7 p.m. Monday to Friday, and 9 a.m. to 1:30 p.m. on Saturday. And note, for this Grey Cup Saturday they will open for breakfast even earlier, say 8 a.m. You can follow them on Instagram and Facebook.