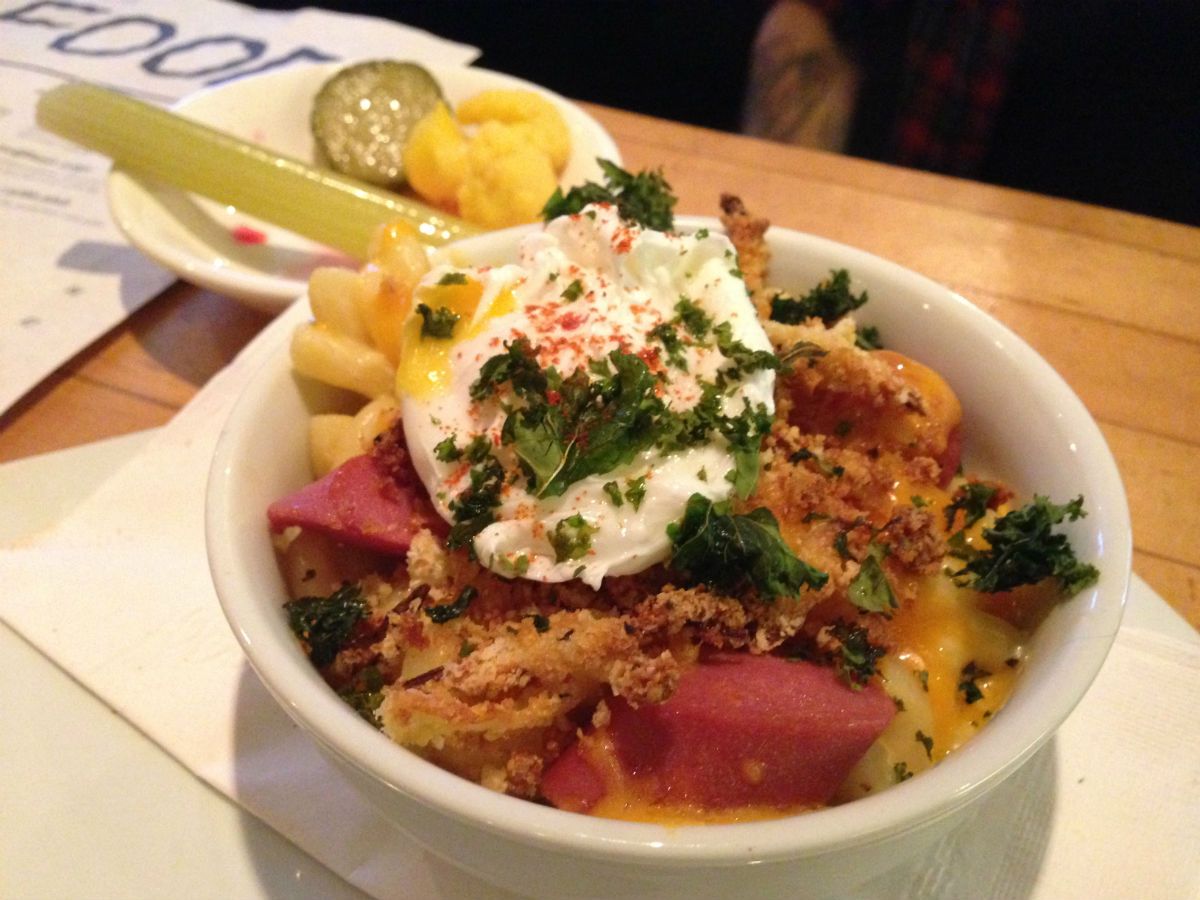 Every neighbourhood needs a Handsome Daughter

When it comes to drinking food (that is to say, food that accompanies boozy drinks -- not putting your meal in a Vitamix) the Japanese have izakaya, the Germans have brats in the Bierhaus, and Winnipeg has a Handsome Daughter.

Fresh off its first year in business last month, this proudly proclaimed dive bar is a hipster hang and one of a few places in the city that stays open really late (6 p.m. to 2 a.m. seven days a week) while still slinging food (until at least 1:00 a.m.).

The tight, tasty menu goes down nicely with its roster of drinks, while the space (which has housed many establishments in the past few years) and concept now appears to be a really good fit in the West Broadway neighbourhood fold. 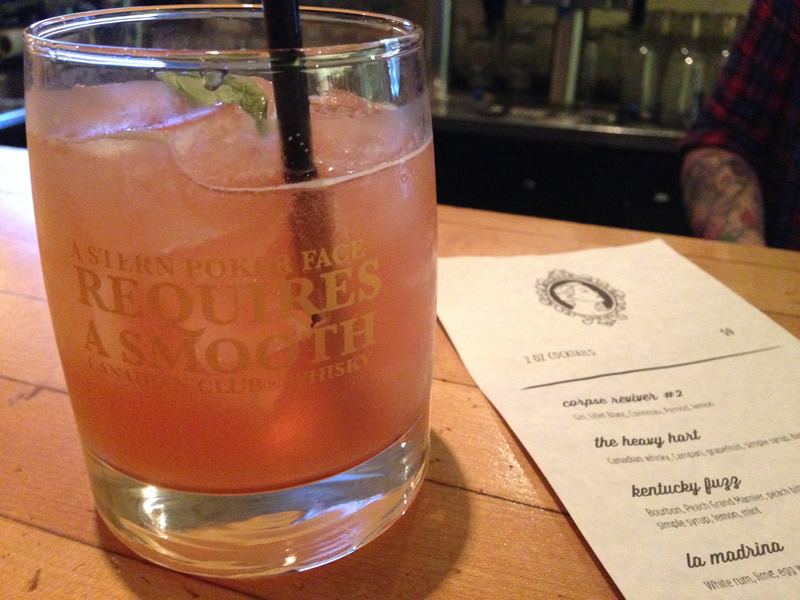 "As far as I'm concerned this is the greatest neighbourhood in the city -- it just has so much going for it," said Jason Evaristo, who tends bar and co-owns the place along with Kirian Eyford, and Steve Diubaldo.

"I've been eyeing up this location for almost a decade... this building just had so much potential, and the neighbourhood as a whole is just so exciting to be a part of with places like The Tallest Poppy, Thom Bargen, Sherbrook Street Deli, and all the stuff that is popping up because of West Broadway Biz," said Evaristo.

Along with the restaurants Evaristo has mentioned, Sherbook Street has become a hub for hip eateries that have added flavour to a street that already included wily veterans like Bistro Dansk, Cousin's Deli, and The Nook. All these spots, along with Boon Burger and an ever-popular Stella's location, continue to feed the cool cats who live in the surrounding houses of Wolseley and West Broadway.

The vibe of Handsome Daughter is like that of the neighbourhood: eclectic and laid back with a dash of cheeky artistry.

Regulars sit at the bar doing a Pickleback (a shot of Jameson with a pickle brine chaser) while waiting for the "Big Mike" -- a braised brisket burger replete withMcD's inspired condiments like thousand island dressing and iceberg lettuce -- while young couples are seated at tables having glasses of wine and sipping bottles of Molson Standard, which is their most popular beer. They also sell Labatt 50 (should they start selling OV they'll complete the "dad beer" triangle) while they also have a selection from local brewery Half Pints along with PBR (of course) on tap. 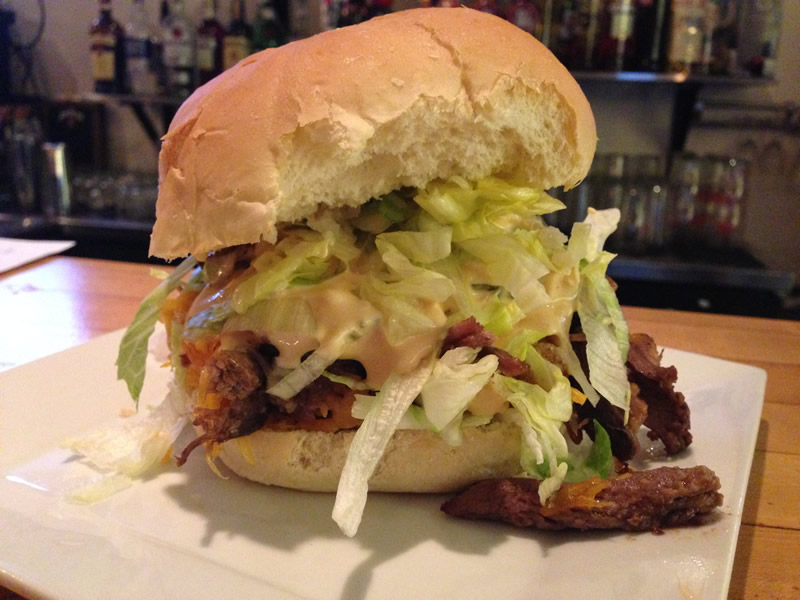 Events take place on nearly every night (which you can follow on their sweet Instagram account) including bands, very specific and very popular trivia nights on Wednesday (it started with The Simpsons and has gone through Seinfeld and It's Always Sunny...), Thursday night comedy shows hosted by my nemesis (JK) Winnipeg's other Mike Green (whom I've never actually met but who is an Arsenal fan... LFC all the way!), along with WWE pay-per views once a month that draw, so I'm told, "very serious wrestling fans."

Needless to say, The Handsome Daughter is doing well as a cultural hub.

Chef Michael Wyspianski and sous chef Mischa Decter took over the kitchen a month and a half ago and came up with a new menu that Decter -- whose culinary background includes Cafe Carlo (4 years) and Osborne Village Cafe -- took me through. (I should mention Decter also books the bands; it's a real communal effort over there). 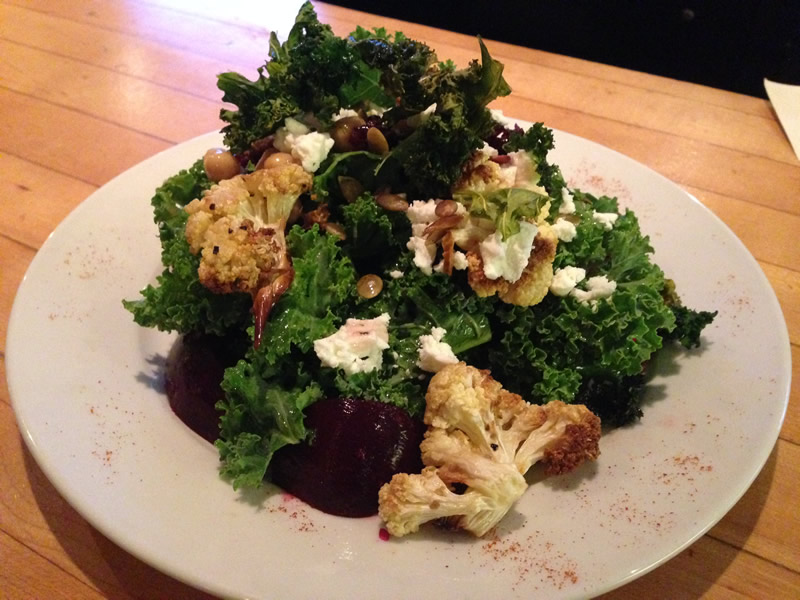 It's heavy into pickled items -- Decter said he loves to brine, as evidenced in his nice work with heritage carrots, the pickling liquid containing some cumin and chili powder that lends a linger of heat -- along with other salty, warming items that come out of their oh-so-tiny kitchen.

Let's start with their Sher-Broke Mac N Cheese (two sizes: $9 or $5 - $5 version pictured at top of article) that is everything you want in a bowl to accompany a pint of beer. The old cheddar sauce is creamy and runny enough to let the elbows bathe, it comes with optional slices of Winnipeg Old Country hot dog (should you wish to relive your childhood, minus the ketchup) that you can substitute cauliflower for, while it gets topped with a runny poached egg, some crispy kale and crunchy, battered onions.

The kale and beet salad ($7) subscribes to the salad school that says if you put a bunch of good things together, it is going to taste good. Roasted beets are seen with their regular partner in crime, goat's cheese, while you get both raw and toasted kale, roasted cauliflower, and pumpkin seeds and chickpeas for nuttiness and texture. The dressing is an acidic red wine balsamic vinaigrette that lifts up all the elements. 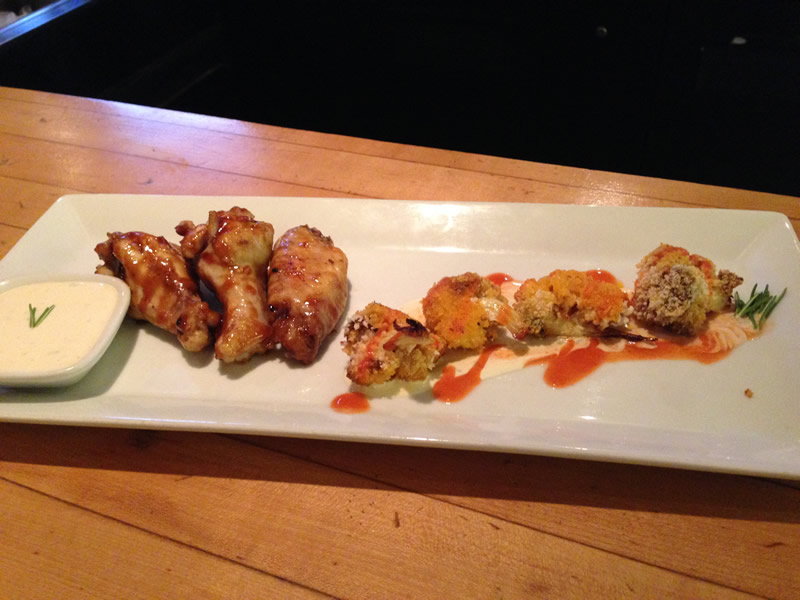 My favourite dish is the panko crusted cauliflower wings ($7, full portion not pictured above) that are laid over housemade buttermilk ranch dressing and hot sauce. I'd eat that all day long, while the actual chicken wings, cooked confit and not finished fried, are also a pleasant surprise.

I've always felt that the only way to do wings is to make sure the skin is super crispy, but this proves me wrong; the skin here is ridiculously soft (without being fatty or greasy) and kind of melts in your mouth. Get them served with the Asian BBQ sauce.

The Handsome Daughter also does fun food specials, like El Salvadorian pupusas, while their pulled pork tacos are pretty solid.

With it's laid back vibe, late, late hours, and nice little menu, I'd argue that every neighbourhood could use a Handsome Daughter. But they don’t, so go find that girl in West Broadway.

The Handsome Daughter is located at 61 Sherbrook Street