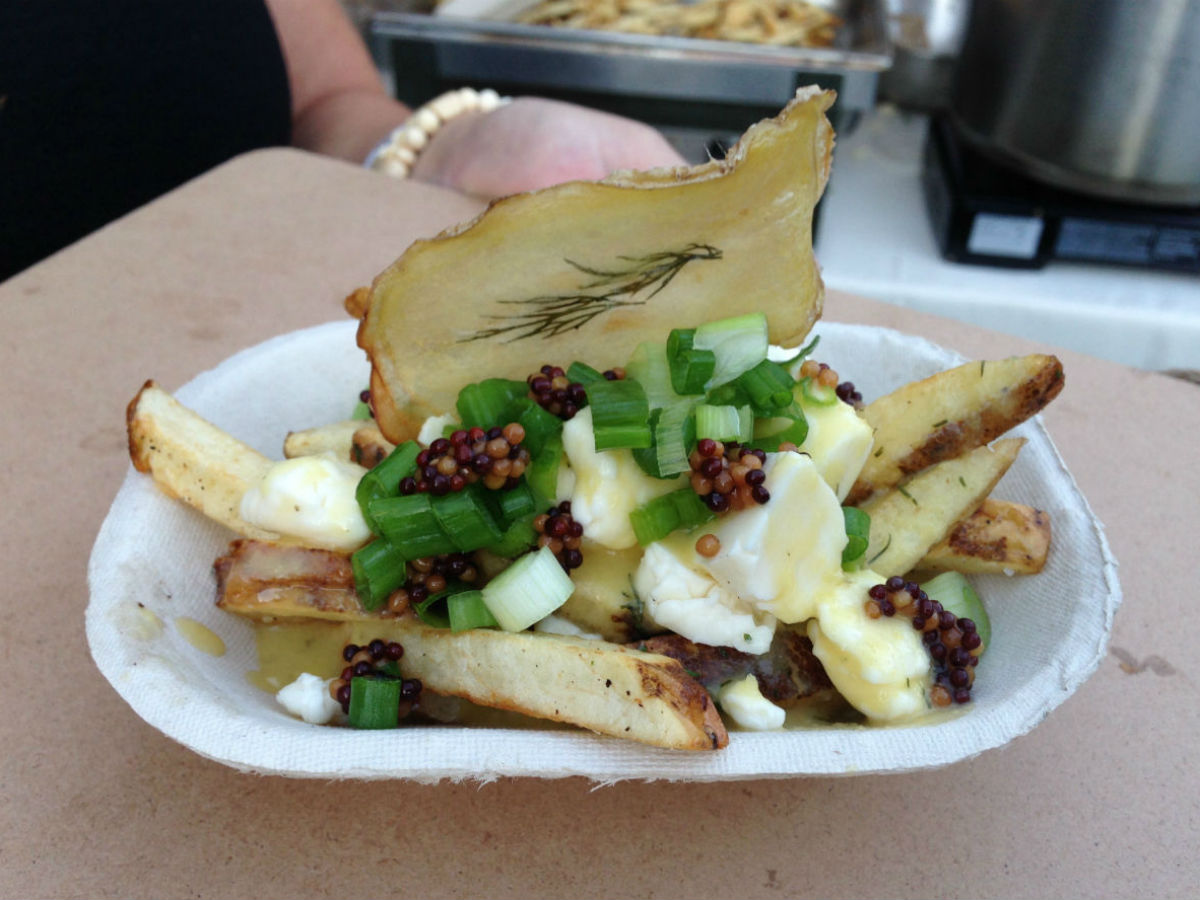 Decadent poutine, who know there was such a thing.

Poutine Cup 2015 sees Marion Street Eatery get all the gravy

I'm pretty sure that hundreds of other Winnipeggers this morning are experiencing the same gravy-induced hangover that I am today.

Last night's Poutine Cup at Fort Gibraltar was not for the faint of heart, nor was it a place to wear tight pants -- although the fashionable young crowd was certainly wearing them (as was I, regrettably).

This year's competition featured 10 Winnipeg restaurants vying for two coveted trophies, those being "judges choice" (the panel of which was food writer Robin Summerfield, chef Ben Kramer, and myself) and the larger trophy for "people's choice," which was decided through ballot. 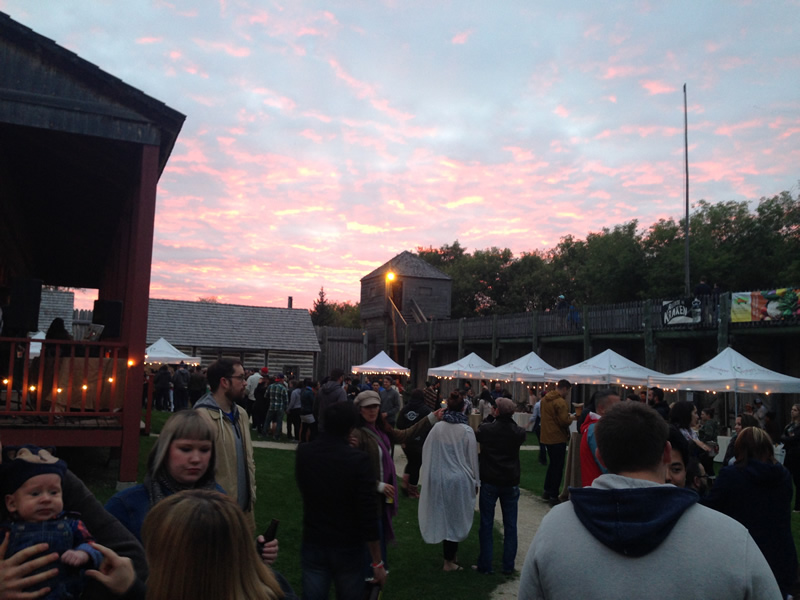 The event was put on by Charcoal Collaborative -- that same creative team who you can also thank for last week's Le Burger Week, along with the fine team at Fort Gibraltar. This was the second year it has been staged, and surely it will become an annual thing with 500 tickets sold, including the first round selling out in under 30 minutes (they released more when it was evident it would not rain).

Its potatoes were generously sponsored by Fresh Option Organic Delivery and Poplar Grove fresh produce (that's right, we were all eating organic) along with Kraken Rum, Half Pints Brewery and Bothwell Cheese -- whose curds could be found everywhere. DJ Co-op was spinning a solid mix of retro and current tracks while Josey Krahn, one of the city's finest barmen from Deer+Almond, was mixing up a couple wicked drinks, including one tequila number that was assertive with ginger juice (which surely was needed to get those digestive juices flowing).

This year offered up a range of gravy-covered endeavours, from more traditional numbers featuring rich gravies and curd -- like Peasant Cookery's peppery, jerk chicken rendition, to out-there creations such as Bernstein's Deli's version with ginger glazed ham, pineapple, and a sweet and sour sauce. 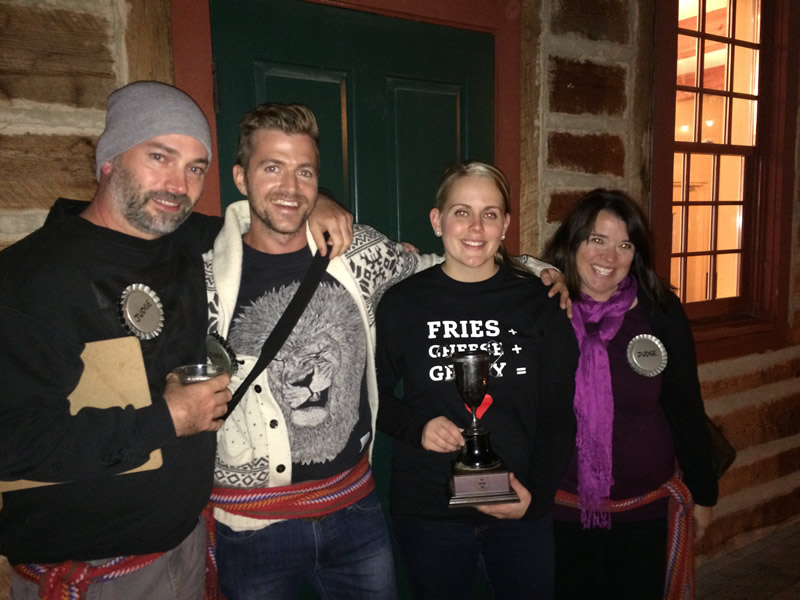 This stunner hit all the right notes, with a vodka horseradish cream that added a brilliant acidity, a spot-on caramelized onion gravy, Bothwell curds, julienned beets and dill pickles for added crunch, along with a garlic sausage crumble. Their thinner fries were also the best on their own; you could snap them between your fingers to make that fabulous crunch sound, while they were well-seasoned and nice and fluffy on the inside. 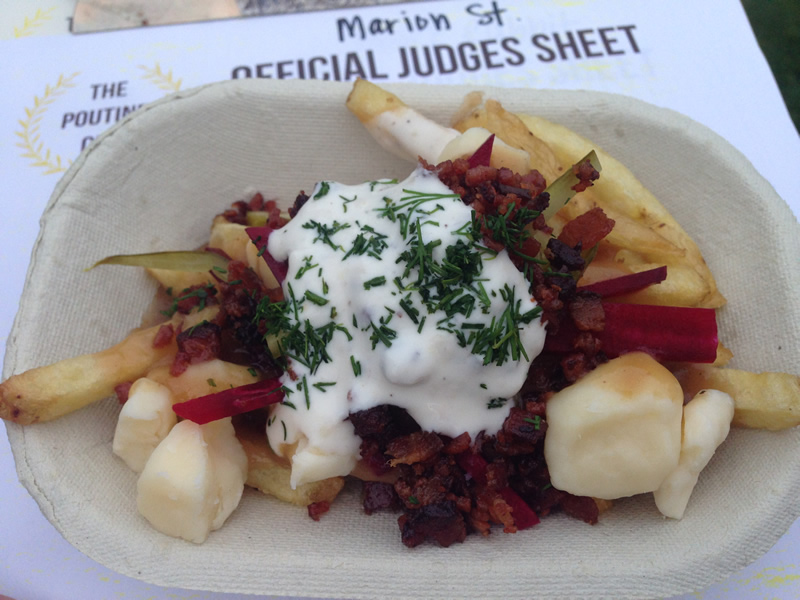 Second on our judges score card, and in the top three for the popular vote, was ERA's poutine "The Strong-Arm Special." It featured russet chips, Bothwell Cheese curds, crispy leeks and a St. James Pale Ale broccoli and cheddar sauce.

It was arguably the prettiest poutine of the day (pictured at top of article) while that pale ale broccoli cheddar sauce was so good you could pretty much put it on anything. It sounds rich, but it never came off heavy, while the fried leeks were perfectly seasoned. 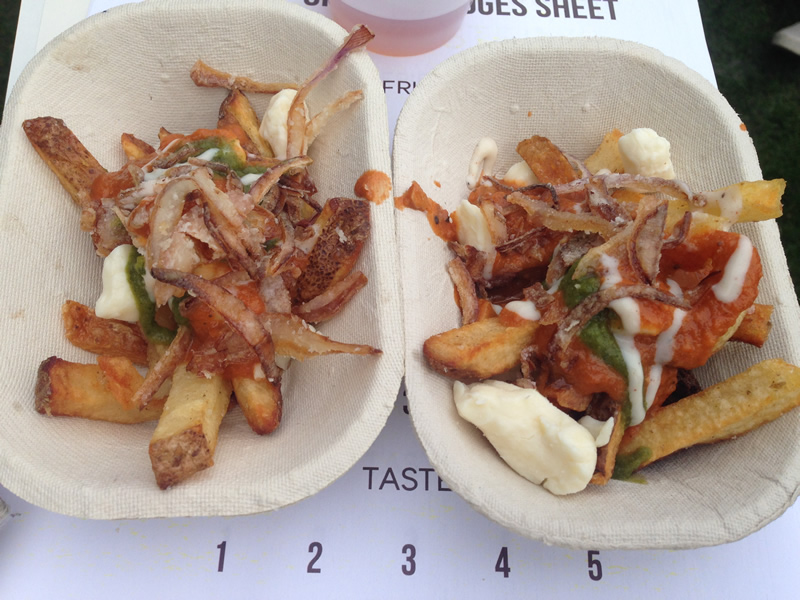 The other two entries that cracked the top three for us judges and the audience respectively were from The Grove and Mon Ami Louis. The Grove's "The (Magical) Butter Chicken Poutine" was a well-balanced mix featuring a creamy butter chicken sauce that was complemented with a bright, acidic raita drizzle featuring a good amount of cilantro. They also served it with a chai cider and smiles all round.

Mon Ami Louis -- who I've noted before in a first-look review as having awesome fries -- did a fun take with buffalo chicken (bonus points for using the dark meat, because let's face it, chicken breasts are lame) and crème fraîche acting as a buttermilk dressing, along with some celery for crunch and colour. 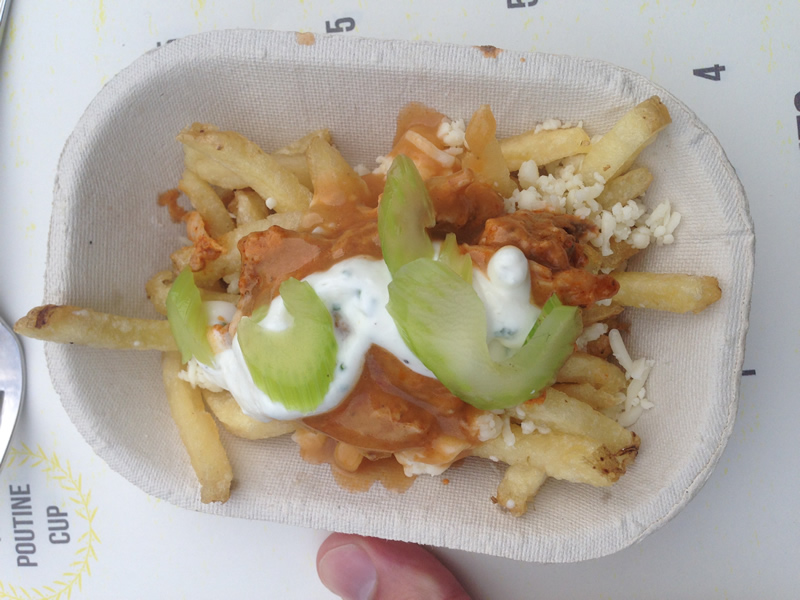 Big thanks to Connie and Shawn and their crew from Fort Gibraltar for hosting, and to Sarah, Dan, Arielle, and Brett from Charcoal for putting together a fun Winnipeg event. As well, look for another Charcoal event this winter that Dan says involves a cocktail competition. I know I'll be there.