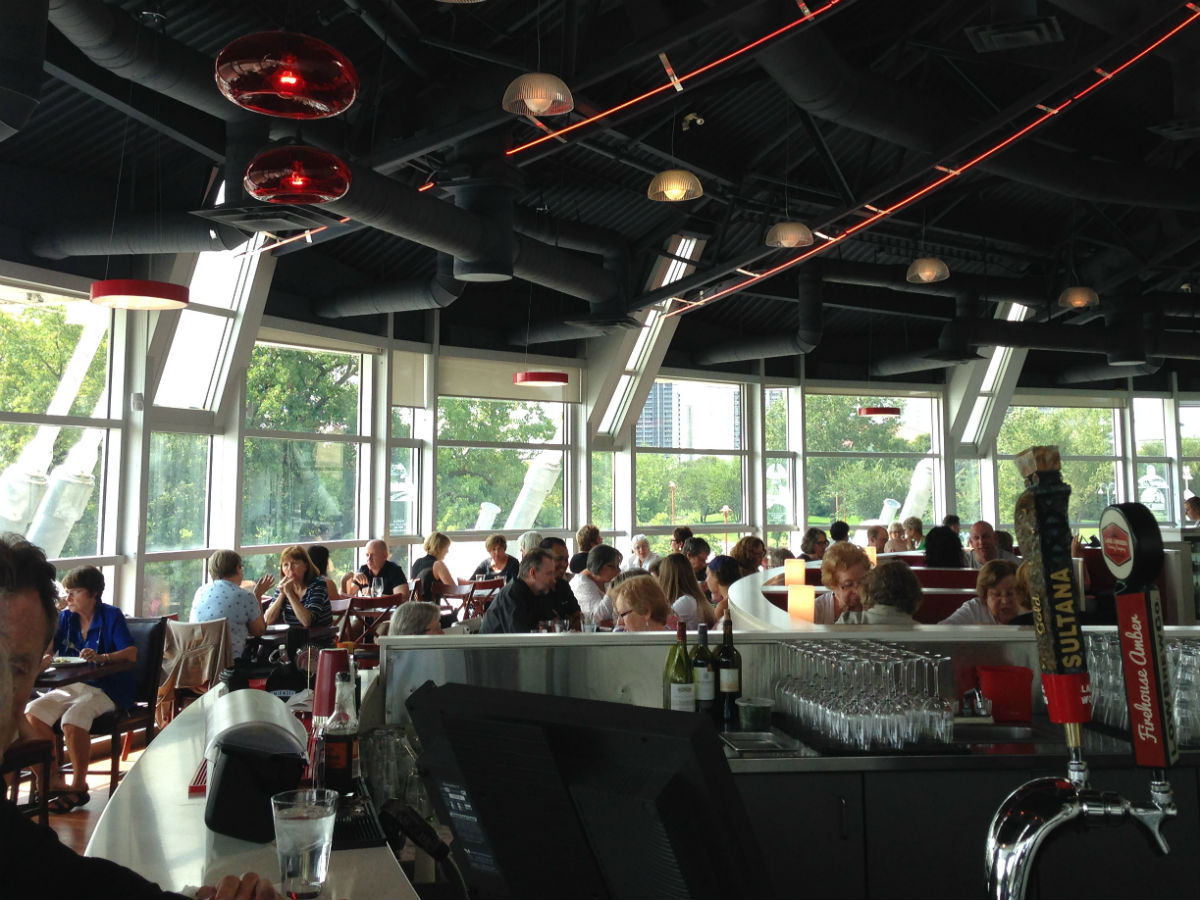 Dining room in the interesting building of Mon Ami Louis!

Let's keep it Riel, I don't who this Louis guy is, but with a burger like that I'd be his friend any day.

Especially if he is going to serve it to me in that gem of a room, which straddles everyone's favourite pedestrian bridge, the Esplanade Riel, and offers sweeping views of the city and the rushing Red River below.

Mon Ami Louis, the newest concept by WOW! Hospitality, and the newest occupant of this iconic location, looks to be a real winner -- if my lunch last week is any indication. The place was pumping; so full in fact that without a reservation we had to grab the only two seats left at the bar (which suited us just fine). 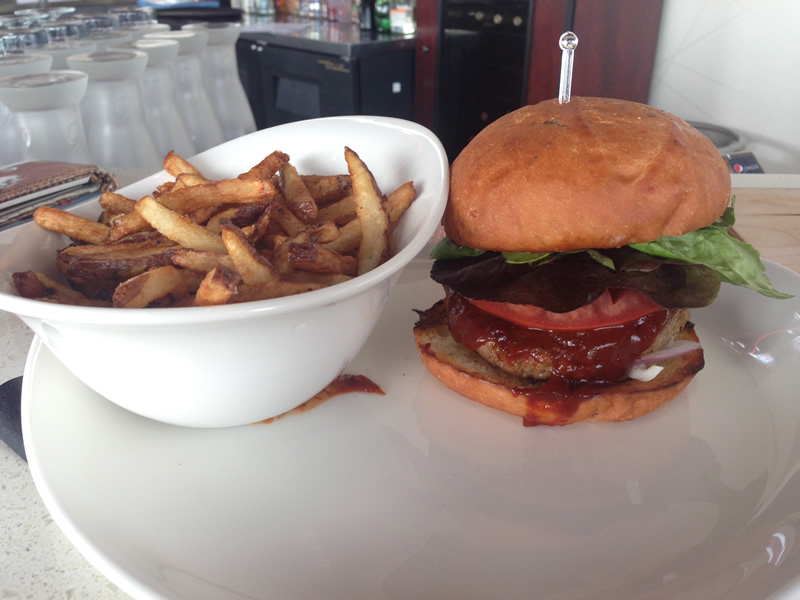 Despite the capacity crowd our food still came out incredibly fast, and we were impressed at both the options on this French-centric menu, along with the nice wine and beer selection -- which included Lake of the Woods Brew Co. on tap.

Jean's recent resume includes winning last year's Winnipeg leg of the Gold Medal Plates competition, having represented Jane's Restaurant at Red River College (where he was a culinary instructor). He's also been a sous chef at Winnipeg's Fairmont and has worked on Australia's Gold Coast. 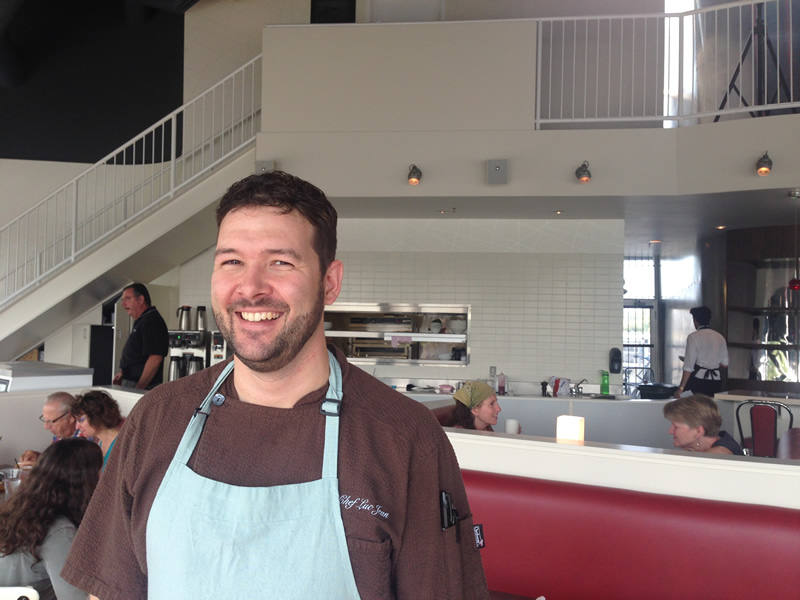 The modestly priced menu is full of French staples, from savoury buckwheat crêpes ($12), a selection of tart flambées ($14-15), several poutines (the fries of which are cooked in duck fat), along with no shortage of braised meats on items throughout.

I'll start with the top, which was the burger. The garlicky, herby bun (baked fresh in house daily) was noteworthy on its own -- nice and buttery so you didn't miss the cheese -- and was just about the right size for the ground brisket patty. There was a good sear on the burger, the fatty brisket kept it nice and juicy, and the tangy house-made barbecue sauce had me licking my fingers instead of reaching for a napkin.

Two business-type dudes were sitting up at the bar beside us also devouring the burger too. We all nodded in unison that this was a fine specimen (while also enjoying those crispy fries). 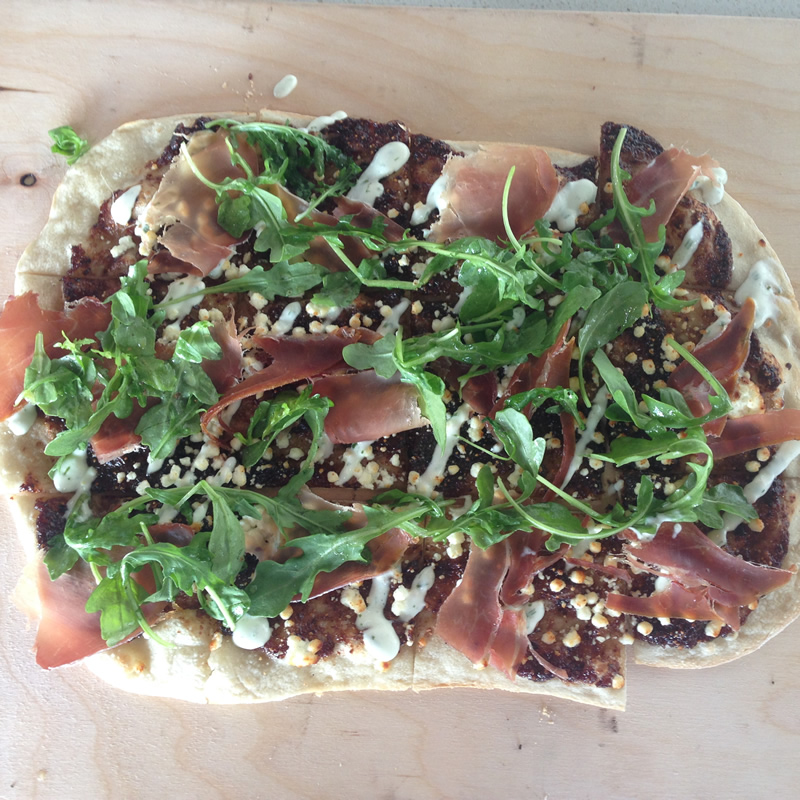 Another noteworthy dish was the Aquitaine tart flambée, which despite seeming to be a large dish, you can totally take down yourself if you aren't up for sharing.

Tart Flambée's are the Alsatian's version of pizza, with a crust that is nearly cracker thin. We went for the Aquitaine, which features a fig jam base that certainly adds a sweetness. The figs though are contained by savoury elements including a goat's cheese dressing and prosciutto, along with some peppery, bitter arugula. It's a nice balance, and (mainly due to the figs) reminded me of my favourite pizza in Winnipeg -- that being the Lucia at Pizzeria Gusto.

The desserts are decadent, as should be expected, with a standout being a dense house-made ice cream sandwich that features two pliable chocolate chunk cookies surrounding some chocolate mousse ice cream. It was damn delectable, and served in a bowl with a hefty pour of raspberry coulis on the bottom.

While this all seems that it would be over-the-top sweet, I assure you it never was. I do not have a sweet tooth -- being more of a cheese plate kind of guy, but I would readily eat this ice cream sandwich for breakfast. 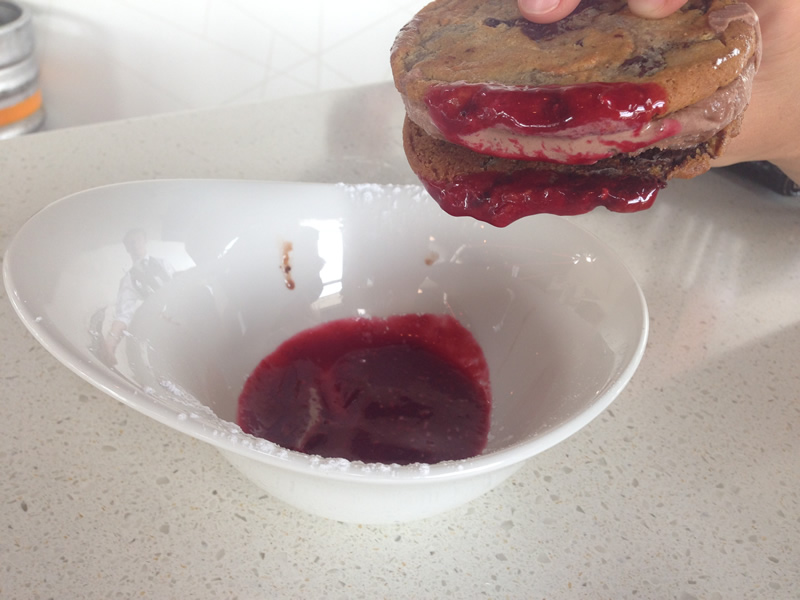 Next time I'll be sure to finish with their Belgian waffle, which also features this coulis along with vanilla gelato, while the table behind us had only great things to say about their gnocchi (with cremini mushrooms and a butternut squash smear) and the Forestière tarte flambée.

Mon Ami Louis is open 11 a.m. to 11 p.m daily but will be closing once the weather turns particularly cold. However, you can book private parties here throughout the winter (and it will be a great venue for that, as you certainly aren't going to beat the views).